Jeremy Corbyn has insisted he is not afraid of going up against Boris Johnson in a snap general election as he hinted Labour will try to topple the government in September.

The Labour leader said he was ‘not in the slightest’ bit concerned about going head to head with the new Prime Minister despite a surge in the polls for Mr Johnson.

There is mounting speculation Mr Johnson will go to the country early, despite his insistence to the contrary, amid concerns that he will be unable to deliver on his ‘do or die’ Brexit pledge.

Asked if he was worried about facing Mr Johnson, who has a history of defeating Labour opponents, Mr Corbyn replied: ‘Not in the slightest. We will go out there and we will make our case.’

Mr Corbyn dismissed calls from the Liberal Democrats last week to launch an immediate vote of no confidence in Mr Johnson’s new government.

Today he suggested he would try to bring down Mr Johnson in September once MPs get back from their summer break.

He told Sky News: ‘Parliament goes back in September and I think it is at that point we will look at the situation there.

‘But it is also up to the prime minister what he decides to do as well because if he is trying to take us out on a No Deal Brexit at the end of October we will oppose that.’

His comments came after a new poll showed the Conservatives have enjoyed a ‘Boris boost’ since the new premier took office while Labour would be in better shape if it ditched Mr Corbyn. 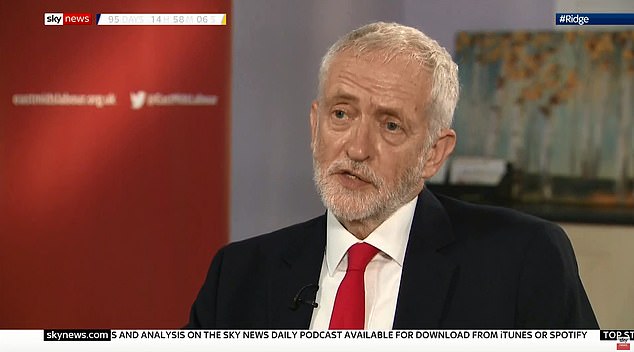 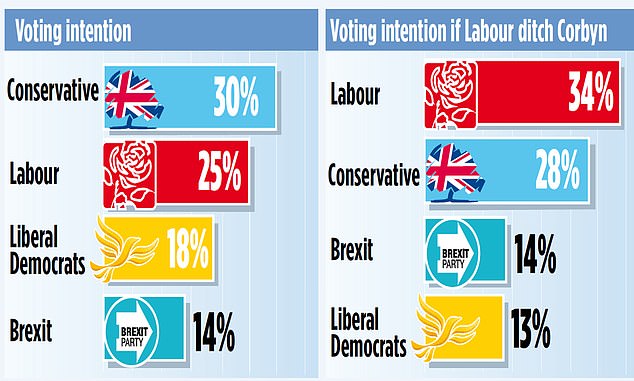 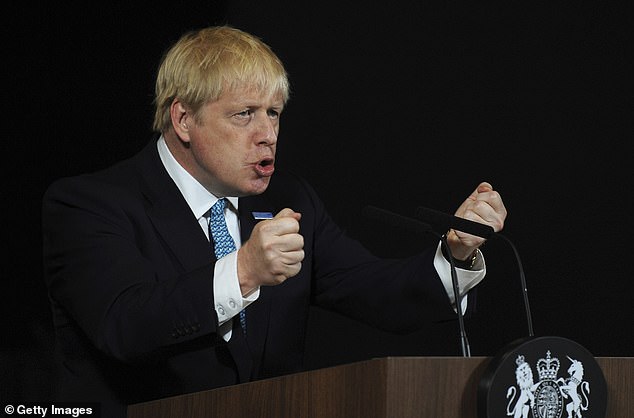 There is mounting speculation Boris Johnson, pictured yesterday in Manchester, could call a snap general election to cash in on his ‘Boris boost’ and a divided Labour Party

A Deltapoll survey puts the Tories on 30 per cent, up from 20 per cent in the firm’s poll for the Mail on Sunday at the start of the summer – turning a six-point lead for Mr Corbyn over Theresa May into a five-point advantage for Mr Johnson.

The poll suggested it was Mr Corbyn himself who is at least partly responsible for the party’s struggles because the Tory lead flips into a six-point advantage for Labour under a new leader.

In fact, it doesn’t even matter who he is replaced by: it’s ‘anyone but Corbyn’.

Shadow chancellor John McDonnell, who has previously been accused of planning a coup against Mr Corbyn, looked visibly deflated when Mr Johnson clashed with Mr Corbyn in the Commons for the first time on Thursday.

Mr Johnson seemed to take great delight in poking fun at the Labour leader during their opening clash and party figures are afraid of an electoral contest between Mr Corbyn and the new PM.

The latest Deltapoll suggests that the Tories have benefited from Mr Johnson’s unequivocal ‘do or die’ Brexit position as they have started to win back voters from The Brexit Party.

The shift in power back to the Tories is likely to increase the chances of an electoral pact between Mr Johnson and Nigel Farage.

Mr Farage has said such a pact is a ‘possibility’ if Mr Johnson is serious about taking the UK out of the EU by the Halloween deadline.

If Mr Johnson continues to improve support for the Conservative Party he may well feel like he does not need to do a deal.

However, even with a ‘Boris bounce’ of ten percentage points over Mr Corbyn, the voting intention figures still suggest that the Tories would fall short of an overall majority in the Commons if a pact were not formed.

Critics believe Labour’s seemingly confusing Breexit policy is one of the main reasons for the party’s struggles in the polls.

Asked if Labour now supported a second referendum in all circumstances, Mr Corbyn said: ‘What we are saying is, No Deal we oppose and we think people should have a final choice on it.

‘We could have a vote then between Remain or whatever option Boris Johnson decides to put to them at that time.’

It was claimed last night that the party’s response to the crisis had landed it with a legal bill of hundreds of thousands of pounds.

Party sources say expert legal advisers drafted in to deal with the row and other legal problems have cost the party close to £400,000.

The claims sparked protests from Labour MPs who demanded ‘full disclosure’ on how much their party was spending to deal with the anti-Semitism furore. 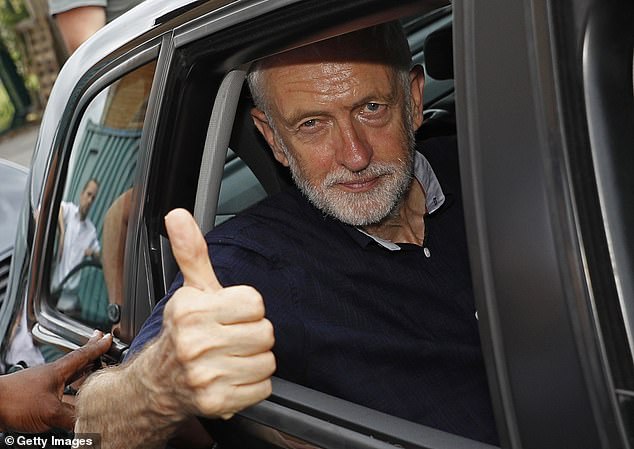 Mr Corbyn, pictured in Manchester yesterday after leaving a rally at which he outlined plans for a green industrial revolution, is under increasing pressure over his leadership of the Labour Party

Mr Corbyn was also hit by claims that party staff working directly for him have agreed to give evidence to an inquiry by the equality watchdog into the controversy.

At least two members of the Opposition leader’s office are understood to have volunteered to give statements to the Equality and Human Rights Commission (EHRC).

Only last week, Mr Corbyn won backing from Labour’s ruling National Executive Committee for a new system to ‘fast-track’ expulsions of party members in the most serious anti-Semitism cases.

It agreed that a new internal panel should be established to take ‘rapid action’ against the worst culprits.

But a new row was raging last night after party sources said legal advisers brought in to help deal with the issue would end up costing Labour hundreds of thousands of pounds.

Labour last night denied it was paying hundreds of thousands of pounds for the anti-Semitism legal advice, adding that it was ‘implacably opposed to anti-Semitism in any form.’