Jeremy Corbyn is condemned for his ‘long history’ of Moscow support

Jeremy Corbyn and his spin chief Seumas Milne were condemned by one of their own MPs last night for their ‘long history’ of being on the same side as Moscow.

Russian state media yesterday praised the Labour leader’s warning that retaliatory action by Britain would lead only to ‘increased tensions’.

Mr Corbyn sparked uproar in the Commons on Monday when he used his response to Theresa May’s statement on the spy poisoning scandal to take a swipe at the Tories over donations from individuals with links to Russia. 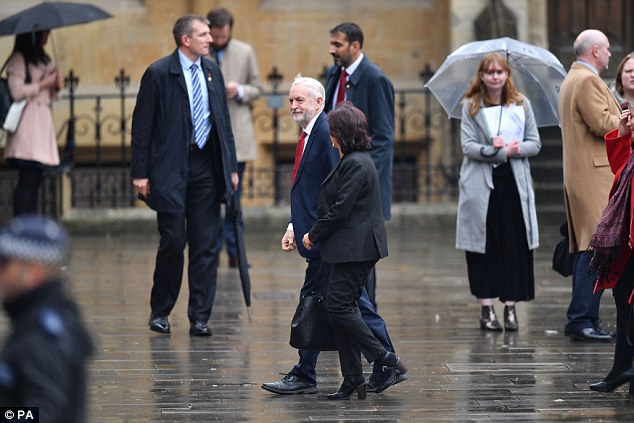 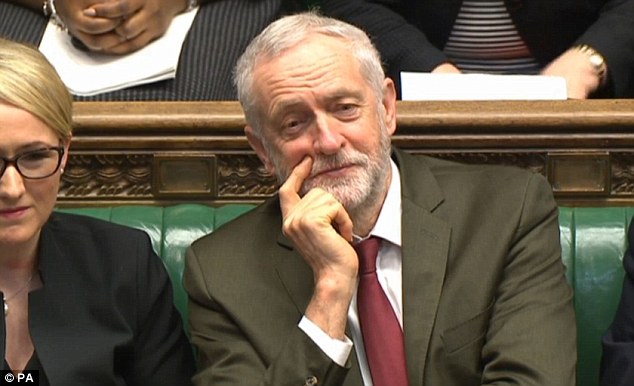 But a dossier compiled by the Daily Mail today reveals how Mr Corbyn’s weak response in the face of Russian aggression comes after decades of behaving sympathetically towards Moscow.

His hard-Left spin doctor and director of strategy, Mr Milne, has also long supported Vladimir Putin – and even appeared at an event with the Russian president after his invasion of Ukraine in 2014.

John Woodcock, the chairman of Labour’s backbench foreign affairs committee, yesterday spoke out against Mr Corbyn, telling BBC Radio 5 Live: ‘If you look at Jeremy Corbyn’s long history on Russia and the views of key people around him, like Seumas Milne, they have been on the wrong side of very important arguments and disagreements that Russia has had with the UK over many years.’

Mr Woodcock added that Mr Corbyn’s Commons appearance ‘wasn’t his best day’. ‘Many of us thought Jeremy got the tone wrong,’ he said.

Mr Corbyn had told MPs that ministers should ‘continue seeking a robust dialogue with Russia on all the issues’, rather than ‘simply cutting off contact and letting the tensions and divisions get worse and, potentially, even more dangerous’.

David Miliband yesterday accused Mr Corbyn of behaving like Donald Trump when it comes to dealing with Russia. The former Labour foreign secretary suggested he was not ‘standing up for British citizens’ with his response to the attempted murder of Sergei Skripal and his daughter.

Mr Miliband told the BBC: ‘Some of the contents of what Jeremy Corbyn was saying, it was strangely like the kind of things President Trump says about the need to engage in dialogue, to keep on talking to them.

‘No one is saying that all contact is going to be cut off. The question is whether there are actions as well as words. It is only actions that show the Russians we are serious.’

However, Russian state media reported Mr Corbyn’s comments approvingly. TV channel Zveda, which is run by the Russian ministry of defence, published an online story with the headline: ‘The leader of the British Labour Party calls for a dialogue with Russia.’

Mr Milne was pictured shaking hands with Mr Putin at a conference in Sochi in October 2014 – just a year before he was appointed as Mr Corbyn’s director of strategy and communications.

In March 2015, Mr Milne wrote an article for The Guardian in which he complained about how ‘Putin has now become a cartoon villain and Russia the target of almost uniformly belligerent propaganda across the western media’.

He wrote: ‘Anyone who questions the dominant narrative on Ukraine – from last year’s overthrow of the elected president and the role of Ukrainian far right to war crimes carried out by Kiev’s forces – is dismissed as a Kremlin dupe.’ Mr Milne said Britain and its Nato allies were guilty of ‘anti-Russian incitement’, which was a ‘dangerous folly’.

He added: ‘There certainly has been military expansionism. But it has overwhelmingly come from Nato, not Moscow. For 20 years, despite the commitments at the end of the cold war, Nato has marched relentlessly eastwards, taking in first former east European Warsaw Pact states, then republics of the former Soviet Union itself.’

Mr Corbyn has repeatedly criticised Nato, branding it ‘the father of the Cold War’.

Labour leader, his spin doctor and their spinless defence of Russia 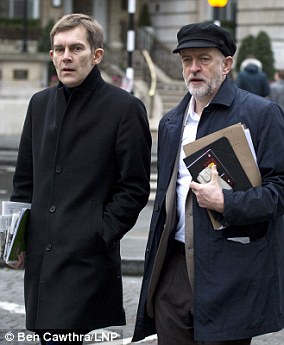