Jeremy Corbyn ‘is TERRIFIED of having to become PM’

Jeremy Corbyn is ‘terrified’ of having to become PM despite his vow to cling on in power for years, it was claimed tonight.

The veteran left-winger ‘doesn’t like taking decisions’ and knows he would be a disaster in No10, a senior Labour figure told MailOnline.

The damning assessment came as Mr Corbyn angrily denied he is on the verge of quitting during bad-tempered clashes with the BBC’s Andrew Marr.

The Labour leader swiped that Marr was one of the people ‘wishing’ to get rid of him – and at one point demanded: ‘What are you trying to say?’

The 70-year-old insisted he would serve a full term as PM if Labour wins a looming election.

However, there are mounting signs that allies are laying the ground for the post-Corbyn era, with splintering hard-Left factions hunting for successors.

His grip on the party looks to be loosening with colleagues including Emily Thornberry, Keir Starmer and John McDonnell increasingly dictating Brexit policy.

As speculation over Mr Corbyn’s future intensified tonight, one senior source said the leader dreaded the possibility of Boris Johnson resigning next month rather than bowing to demands to delay Brexit.

That would potentially mean the Queen asking the Labour leader to take over as PM and try to form a minority government.

‘If Jeremy had to become PM he would find that terrifying,’ the senior MP said.

‘He doesn’t like taking decisions, he doesn’t want to be the person who has 20 text messages to deal with before he goes to bed at midnight, and is woken up at 6am with more demands on his time.’

They said Mr Corbyn had never been prepared for the pressures of running a party, let alone a country.

‘He’s happy when he’s got something to push back against,’ the MP said.

‘But when power becomes more real and he’s got to reconcile competing interests, he just can’t do it.’ 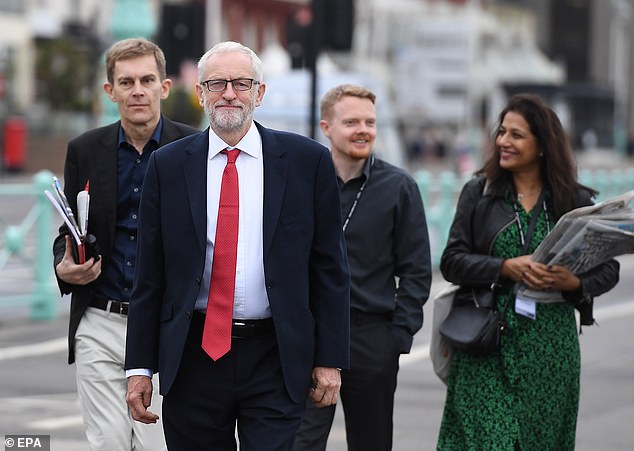 However, Mr Corbyn dismissed claims he will stand down soon in the interview this morning, telling Marr: ‘That is wishful thinking by some people – probably yourself.’

He insisted he will serve a full term as PM if Labour wins a general election, but said: ‘I am very surprised at the question actually.’

Marr hit back that who was PM was a matter of great concern to the public.

One shadow cabinet member rejected the suggestion that Mr Corbyn was on the edge of quitting.

‘Jeremy is more than capable of leading the party in five years’ time. Donald Trump is 73 – maybe we should just give Jeremy a wig and some fake tan,’ they told MailOnline. 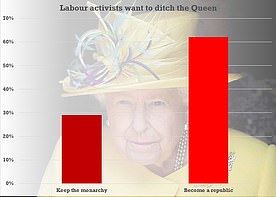 Some 62 per cent of Labour members say the UK should become a republic, compared to 29 per cent who believe in retaining the monarchy, according to the YouGov poll

Labour members want to ditch the Queen and blame Britain for IRA attacks, according to a shock poll today.

Most activists are ashamed rather than proud of the UK’s history, and tend to blame the media for the anti-Semitism crisis wracking the party.

The grim picture of the Labour faithful under Jeremy Corbyn’s stewardship emerged as the party holds its conference in Brighton.

But the event has already been marred by bitter infighting as the hard Left tries to purge moderates.

The YouGov poll of 1,100 members found just 15 per cent are ‘proud’ of Britain’s history – while 43 per cent said they were ‘ashamed’.

But the shadow minister admitted it was ‘frustrating’ that policy announcements were being overshadowed by rowing and leadership wrangling.

‘We could be within weeks of an election and we want to use this conference to parade some of our great policies, and all everyone is talking about is Brexit and disunity.’

Meanwhile, Tom Watson upped the stakes in the Brexit battle today as he claimed ‘Labour is a Remain party’.

A bid by Mr Corbyn’s allies to oust the deputy leader had to be humiliatingly aborted yesterday after sparking an outcry.

It was seen as more evidence of succession planning, as Mr Watson would theoretically take over temporarily if Mr Corbyn stood aside.

Mr Corbyn defended his much-ridiculed plan to go into an election without saying whether he would campaign to remain in the EU in the referendum he is promising.

The Labour leader hopes to negotiate a new Brexit deal with Brussels and put that to a public vote against the option of staying in the EU.

He told the BBC: ‘What we have said is that we would want to hold a consultation, a special conference of our party at the point that we have got this offer from the EU, we’ve got this as a remain – and hopefully reform – option.

‘Because I do think even those that are strongly in favour of remain would recognise the EU needs to have some reforms.’

In response to MPs and activists – including shadow cabinet ministers – calling for the party to come out in support of Remain under all circumstances, Mr Corbyn said: ‘I will go along with whatever decision the party comes to.’

But he added: ‘Please remember why people voted leave, why people voted remain, but also remember there is more that unites all of those people – over austerity, over investment, over education, over housing, over health, over a green industrial revolution – than there is that divides them.’ 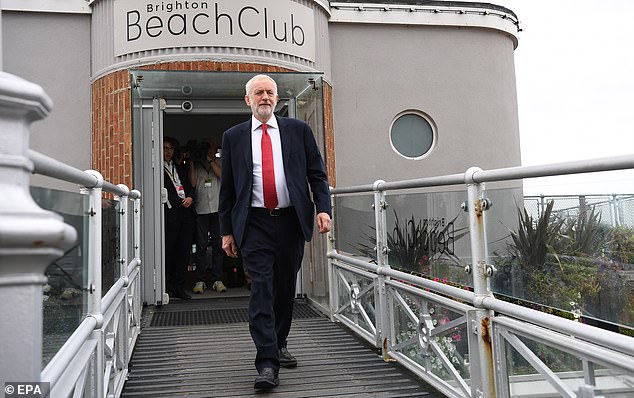 The Labour leader, pictured after his interview with the BBC this morning, has faced a disastrous start to his party’s 2019 conference 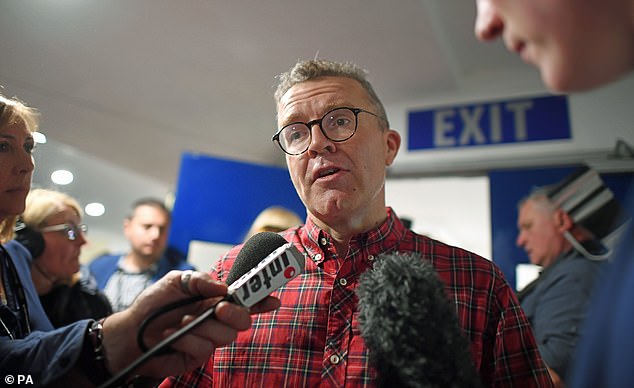 Allies of Mr Corbyn failed in a bid to oust Tom Watson, pictured talking to reporters in Brighton today, as deputy party leader

The move has been described by allies of Mr Corbyn as means by which to secure the hard-Left’s grip over the party’s leadership. And it is reportedly thought by some Corbyn allies that another leader would have a better chance of securing Tory support to prevent a No Deal Brexit.

One shadow cabinet minister told The Sunday Telegraph that Lansman’s actions, on behalf of Momentum, were an attempt to ‘secure the succession’ on the basis that ‘we have passed the high-water mark of Corbynism’.

As he was buffeted from all directions today, Mr Corbyn also tried to shrug off a row over the bombshell resignation of close aide Andrew Fisher,  who sent a memo criticising public-school educated senior colleagues including strategy chief Seumas Milne.

Jeremy Corbyn will not win a majority at the next general election, Labour MP Jess Phillips has claimed as she said the party leader was now past his ‘peak’.

Ms Phillips, the outspoken MP for Birmingham Yardley, said she believed it was possible that Labour could be the largest party after a snap poll.

But she said she ‘can’t see a way’ for Mr Corbyn to win the contest outright as she suggested he would struggle to beat his better-than-expected performance in 2017.

She also joined rebel Labour calls, led by deputy party leader Tom Watson, for a second Brexit referendum to be held before a general election.

Mr Corbyn has said he wants there to be an election followed by a second referendum.

He said Mr Fisher had been ‘distressed’ about an internal argument and suspected similar memos were ‘flying around the BBC’ all the time, adding: ‘Maybe, Andrew, even in your team.’

Mr Fisher, head of policy and the author of the party’s last manifesto, delivered a scathing assessment of the ‘blizzard of lies and excuses’ emanating from Mr Corbyn’s office, and claimed it was in the grip of a ‘class war’.

In a memo seen by The Sunday Times and sent last week, Mr Fisher denounced Mr Corbyn’s team for their ‘lack of professionalism, competence and human decency.’

Mr Fisher is expected to stay on until the end of the year, and has played down the spat with Mr Corbyn’s office in another message to colleagues overnight – saying he wanted to prioritise his family after four years of ‘long hours and stress’.

Mr Corbyn staged a toe-curling photo-op designed to defuse the story on the way into party conference this morning.

He was flanked by both Mr Milne and Mr Fisher, with all three wearing fixed smiles for the waiting cameras.

During his interview, a clearly rattled Mr Corbyn said of Mr Fisher: ‘He is wanting to leave in order to spend time looking after his son and being with his wife and his family – because this is a very stressful and very full-on job.

‘And he is working with us for the rest of this year – he will be here for the general election campaign, he is as we speak… downstairs.’

Asked about Mr Fisher’s comments that he was sick of the ‘blizzard of lies’ within Mr Corbyn’s team, the Labour leader said: ‘I think he said that because he was extremely distressed at that point about whatever was going on in discussions within the office at that moment.’

Mr Corbyn added: ‘He is a great colleague, a great friend… I’ve worked with Andrew for 15 years, when I was a backbencher and many other times. He is a great writer, he’s a great thinker and he’s done a huge amount of work in the party.

‘We get along absolutely very well and he’s promised that whatever happens in the future he will be working with me on policy issues.’

Mr Fisher had reportedly claimed when he quit that just one week out from Labour’s conference the leadership had not managed to arrive at a central message despite spending ‘tens of thousands of pounds’ on focus groups and polling.

He painted a picture of a chaotic leader’s office in which speeches were cancelled at the last minute and confidential documents were left out on the printer.

Mr Corbyn has previously faced pressure to stage a clear out of his top aides with John McDonnell and Diane Abbott reportedly having privately called for Mr Milne and Karie Murphy, the Labour leader’s gatekeeper, to be replaced.

One source in the leader’s office told The Sunday Times that Mr Milne ‘is the problem’ as they bemoaned the former Guardian journalist’s influence over the direction of the party.

Another source said that if Mr Milne stayed in post Labour would not win the next election, with Mr McDonnell apparently ‘completely furious’ with him.

Mr Milne plays a central role in agreeing Labour’s messaging and one source claimed he had a ‘hissy fit’ when he returned from his summer holiday because of the work that had been done in his absence.

Meanwhile, Mr Milne was also under fire today after it was claimed that he and Mr Corbyn’s press chief James Schneider had signed off on the party’s conference slogan of ‘people before privilege’.

Both men attended an elite public school and went to Oxford University, prompting one Labour staffer to remark that ‘irony is dead’.

The motion was due to be debated at yesterday morning’s meeting of the NEC, but was withdrawn after Mr Corbyn tabled a call for a review of the deputy leadership position.

Mr Corbyn said today that he did not know that the motion would be put ‘at that time’.

He insisted he gets on ‘absolutely fine’ with Mr Watson, and told Marr: ‘I knew there were discussions going on about the role of deputy leader – I did not know that particular motion was going to be put at that time.’

Asked why he didn’t know, Mr Corbyn said: ‘I’m not all seeing and all knowing – I’d love to be.’