The Labour leader said the abuse would not be ‘tolerated by a Labour government after the UK’s Chief Rabbi Ephraim Mirvis said said the majority of Jews were ‘gripped by anxiety’ about his potential election victory.

The veteran left-winger had to dodge protests outside the launch of the party’s ‘race and faith’ manifesto in London.

And when he finally took to the stage he showed no regret for his handling of the wave of abuse wracking Labour – avoiding directly addressing the stinging criticism from the Jewish community and merely insisting anti-Semitism is ‘vile and wrong’.

But while on stage in north London at lunchtime he was flanked by Claudia Webbe and Apsana Begum.

Ms Webbe, who is standing in Leicester East at the election, defended ex-London mayor Ken Livingstone after he compared a Jewish reporter to a concentration camp guard.

And Ms Begum is standing in Poplar and Limehouse in East London, despite apologising for Facebook posts including one which suggested Saudi Arabia’s leaders were ‘inspired by their Zionist masters’.

Also with the Labour lader was Afzal Khan, the shadow immigration minister, who apologised in July for sharing ‘an anti-Semitic conspiracy’ on Facebook in 2015. 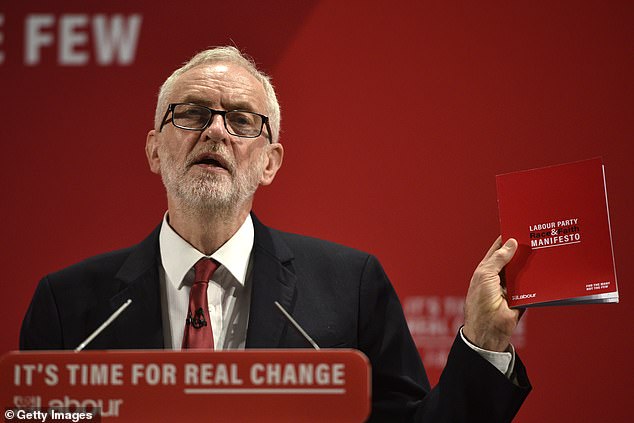 ‘Corbyn, accused of anti-Semitism by the Chief Rabbi, responds by going on stage with know anti-Semites. We must stop this dangerous man.’

And fellow Tory candidate Michael Fabricant added: ‘And Corbyn claims that Labour are rigorous about expelling anti-Semites. Judge him by the friends he keeps.’ 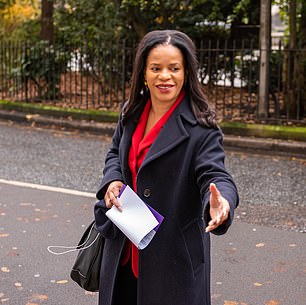 The selection of Ms Webbe, a a councillor in Mr Corbyn’s Islington constituency in London, to fight the Leicester seat vacated by the disgraced Keith Vaz, prompted the resignation of a senior local party official.

John Thomas, the chairman of the Leicester East CLP, described the selection process as a ‘fix’ and a ‘disgrace’ in a letter to Labour general secretary Jennie Formby.

Ms Webbe is a former adviser to ex-mayor of London Mr Livingstone and worked on his election bids in 2000 and 2004.

She stood up for Mr Livingstone when he was suspended in 2005 for comparing a Jewish reporter to a Nazi concentration camp guard.

She wrote to The Guardian, saying the suspension ‘smacked in the face of true democracy’, adding: ‘His history of work in the anti-racist movement is unquestionable.’

In 2017 she shared a Facebook post criticising Saudi Arabia and suggesting its leaders were ‘inspired by their Zionist masters’.

At the time she said she had not made the post herself but shared it ‘because I was concerned with the treatment of pilgrims who were being harassed in the Mecca Grand Mosque’. She said she would not use the words herself and was ‘committed to fighting anti-Semitism’. 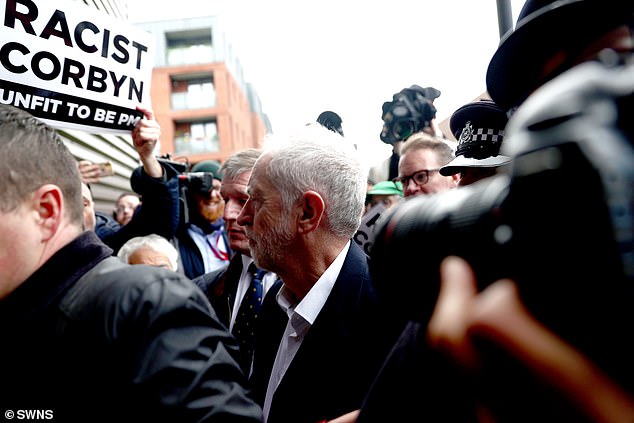 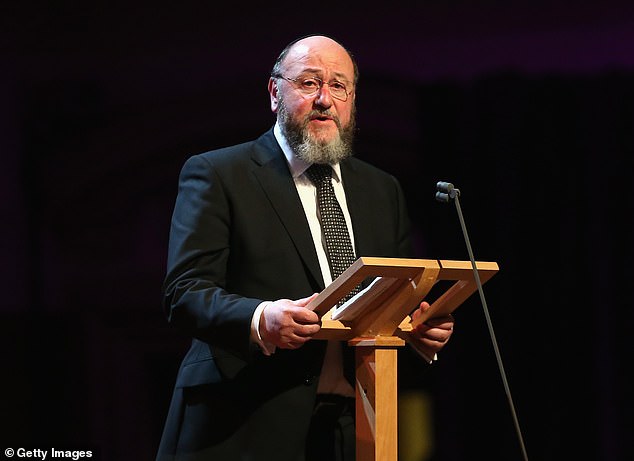 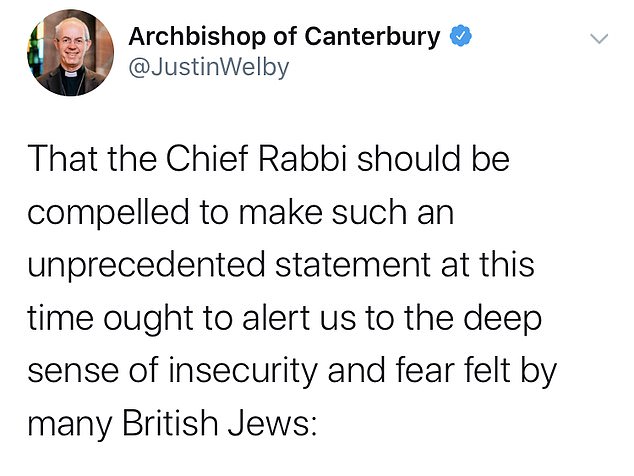 Veteran left-winger Mr Corbyn had to dodge protests outside the launch of the party’s ‘race and faith’ manifesto in London.

And when he finally took to the stage he showed no regret for his handling of the wave of abuse wracking Labour – avoiding directly addressing the stinging criticism from the Jewish community and merely insisting anti-Semitism is ‘vile and wrong’.

Answering questions from reporters, Mr Corbyn was pressed on whether he had ‘failed’ and said he had toughened up the party’s complaints process.

He said there was an ‘open door’ to faith leaders. ‘I am very happy to engage with anybody,’ he said. 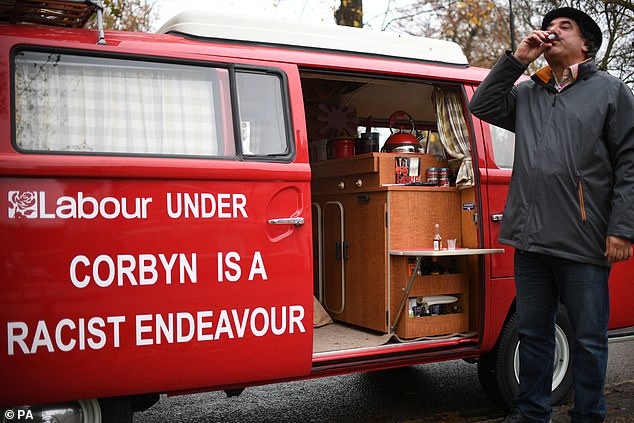 Protesters had gathered (pictured) outside the manifesto event in London today

But he was immediately contradicted by one of his own peers, Lord Falconer, who said it was a ‘failure of leadership’ that ‘a lot of cases’ have not been properly investigated – adding that the rabbi’s condemnation was ‘justified’.

The event started 45 minutes late and Mr Corbyn did not arrive until well after it began, with speakers including shadow home secretary Diane Abbott going first.

Corbynistas have been making vile attacks on Rabbi Mirvis after he delivered a devastating verdict on the Labour leadership – and was backed by the Archbishop of Canterbury.

Making an unprecedented intervention, Rabbi Mirvis said the vast majority of British Jews were ‘gripped by anxiety’ at the idea of Mr Corbyn in No 10. 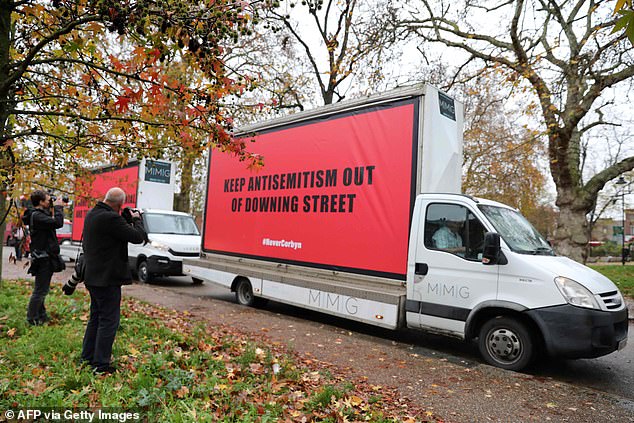 Posters outside the venue in north London bore the message: ‘Keep anti-Semitism out of Downing Street.’

He accused Mr Corbyn of allowing the ‘poison’ of anti-Semitism to take root in Labour, saying it could no longer claim to be the party of diversity, equality and anti-racism.

Urging voters to examine their consciences in the polling booth, he warned: ‘The very soul of our nation is at stake.’

The Archbishop of Canterbury, Justin Welby, waded into the row today by saying the rabbi’s intervention should ‘alert us to the deep sense of insecurity and fear felt by many British Jews’.

But both religious leaders were subjected to a vicious backlash on social media, with Rabbi Mirvis branded a ‘sewer rat’ and complaints of ‘Israeli interference’.

Mr Corbyn arrived through the back door to the race and faith manifesto launch about 50 minutes after it was due to start amid cries of ‘racist’ and ‘oh Jeremy Corbyn’ between critics and supporters.

The Labour leader hurried into the venue from his van and through a media pack.

Mr Corbyn said there was ‘absolutely no place whatsoever in any shape or form’ for anti-Semitism, calling it ‘an evil within our society’.

‘Under a Labour government it will not be tolerated in any form whatsoever.’ He said the Chief Rabbi was welcome to come ’round the table’ and talk about how to stamp out racism.

Mr Corbyn said Labour had a ‘rapid process’ for dealing with complaints about anti-Semitism – although whistleblowers have claimed that dozens of cases have been effectively swept under the carpet.

Mr Corbyn left the stage after his speech – but later returned to face questions from reporters.

‘I invite the chief rabbi, I invite the archbishop of Canterbury, I invite all the other faith leaders to come talk to us about what their concerns are,’ he said.

‘But be absolutely sure of this assurance from me: no community will be at risk because of their identity, their faith, their ethnicity, or their language.’

Earlier, the Chief Rabbi took aim at Mr Corbyn for supporting a racist mural and for describing terrorists who endorse the murder of Jews as ‘friends’.

Mr Welby said: ‘That the Chief Rabbi should be compelled to make such an unprecedented statement at this time ought to alert us to the deep sense of insecurity and fear felt by many British Jews.’

The warnings came as Mr Corbyn prepared to launch his party’s ‘race and faith manifesto’, which includes a plan to hold an inquiry into far-Right extremism.

It also proposes to teach all schoolchildren about the ‘injustice’ of the British Empire.