Mr Corbyn, who is currently sitting as an independent after being stripped of the Labour whip, was joined by more than a dozen of his supporters from within the party in a backbench rebellion.

Sir Keir had ordered his party to abstain in the evening Commons showdown, in which MPs voted to introduce a toughened new system to replace lockdown from midnight.

A host of them had used the debate on the new tiers before the vote to outline their dissatisfaction with the new regime, which many felt penalises hard-pressed areas of the North in favour of more freedom for London.

Mr Corbyn had his Labour membership restored after being suspended for his response to the damning report into anti-Semitism within the party but Sir Keir Starmer has not restored the whip, meaning he cannot sit as a Labour MP.

The Islington North MP tweeted this evening: ‘I voted against the Government’s proposals tonight.

‘I don’t believe the measures are what is needed to drive down the levels of the virus.

‘The financial support packages being offered are inadequate, inconsistent and unfair to many areas.’

Mr Corbyn, who is currently sitting as an independent after being stripped of the Labour whips, was joined by more than a dozen of his supporters from within the party in a backbench rebellion. 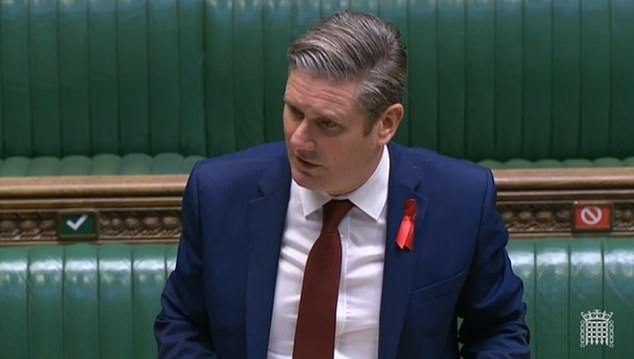 Sir Keir had ordered his party to abstain in the evening Commons showdown, in which MPs voted to introduce a toughened new system to replace lockdown from midnight 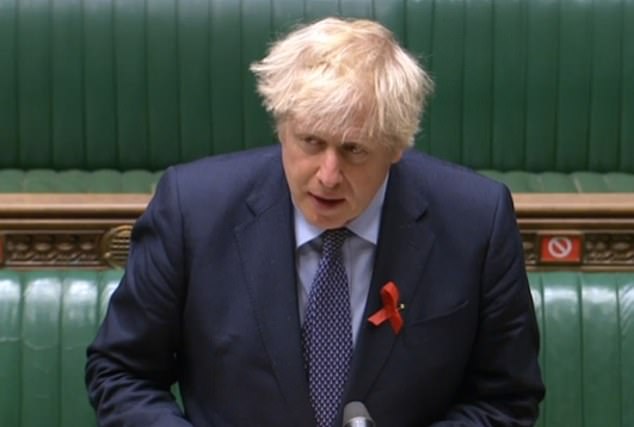 Fifteen Labour MPs defied Sir Keir’s order to abstain in tonight’s vote in order to oppose the new tiers. They are:

Earlier today Sir Keir warned Boris Johnson there were ‘real risks’ his new tiers plan to follow the lockdown would not work to half the spread of coronavirus today.

The Opposition Leader tore into the Prime Minister in the Commons ahead of tonight’s vote to approve the stiffened system when lockdown ends at midnight.

Labour abstention on the Commons vote, prompted accusations from Downing Street that he was ‘playing politics’ in the middle of the pandemic.

His decision exposed already glowing Tory fault-lines on the divisive issue and also allow Sir Keir to quieten a rebellion on his own backbenches.

Some Labour MPs from Northern areas that will be placed in the strictest Tier 3 were furious at the idea that the party could vote with the Government, as it has on previous occasions.

Addressing the Commons this afternoon, Sir Keir said that the Government plans were ‘full of holes’.

‘I do recognise that the tiers have been toughened as it was obvious to everyone that the previous tiers were a one-way street to Tier 3. But I’m far from convinced by what the PM has said today,’ he said.

‘In particular the economic package is nowhere near sufficient to support the communities most affected. They have been suffering for many months.

‘l fear that without the right health measures in place, in particular a working test-and-isolate system, there are real risks that this plan is incapable of controlling the virus this winter.’

The PM has failed to quell rising fury on his own benches about the draconian restrictions, which will leave 99 per cent of England under the toughest two levels from tomorrow.

Sir Keir added that he and many of the British people are ‘far less convinced’ with the Government’s approach this time round.

He told MPs: ‘Nineteen days later, fourth attempt now, a hurried press conference on the Saturday, the Prime Minister announced that the tiered system had failed, the virus was out of control and a national lockdown was now unavoidable.

‘The reason this all matters is because there is a pattern here – the Prime Minister has got a record of over-promising and under-delivering short-term decisions that then bump into the harsh reality of the virus.

‘And then a new plan is conjured up a few weeks later – we’re now on at least the fifth – with an even bigger promise that never materialises.

After Sir Kier’s announcement last night that Labour would abstain, a No10 spokesman said: ‘This pandemic is one of the biggest challenges facing the country in decades and Labour have decided to abstain on it.

‘While Keir Starmer claims he offers new leadership, it’s clear to all that he actually offers no leadership at all.

‘Keir Starmer is playing politics in the middle of a global pandemic instead of working with the Government to find a way through this difficult time for the British people.’

As many as 100 Tory MPs have been considering defying Boris Johnson in a crunch vote this evening, and were left livid when ministers finally released an impact assessment of the tier measures last night, only to find it did not feature any new detail. Rebel ringleader Mark Harper said the ‘wheels were coming off’ the policy.

It is understood the government has another dossier that includes more ‘granular’ information on 40 areas of the economy, although sources dismissed the idea it is ‘secret’, saying it only contains material already ‘publicly available’.

Labour MPs had already publicly refused to back the moves before the party leader’s shift. 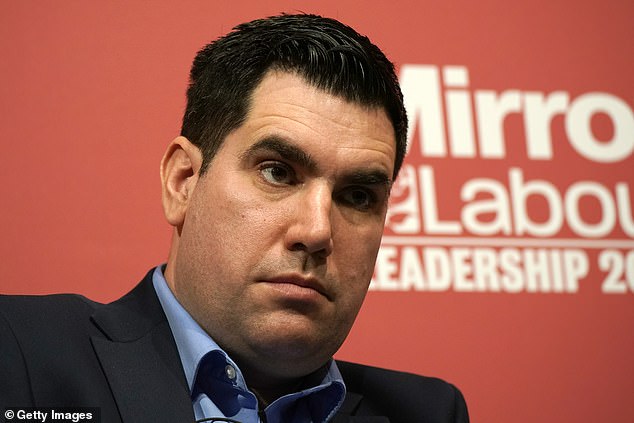 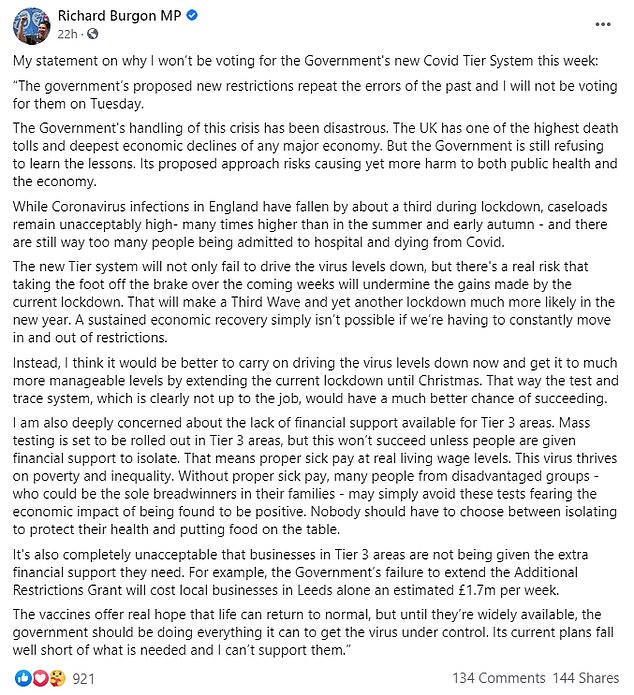 Leftwinger Richard Burgon, secretary of the Socialist Campaign Group and a former shadow justice secretary under previous leader Jeremy Corbyn, was among those who refused to vote for the tiers

Leftwinger Richard Burgon, secretary of the Socialist Campaign Group and a former shadow justice secretary under previous leader Jeremy Corbyn, was among those who refused to vote for the tiers.

Demanding the current lockdown continue until Christmas, he said: ‘The UK has one of the highest death tolls and deepest economic declines of any major economy. But the Government is still refusing to learn the lessons. Its proposed approach risks causing yet more harm to both public health and the economy.

‘While Coronavirus infections in England have fallen by about a third during lockdown, caseloads remain unacceptably high- many times higher than in the summer and early autumn – and there are still way too many people being admitted to hospital and dying from Covid.

‘The new Tier system will not only fail to drive the virus levels down, but there’s a real risk that taking the foot off the brake over the coming weeks will undermine the gains made by the current lockdown. That will make a Third Wave and yet another lockdown much more likely in the new year. A sustained economic recovery simply isn’t possible if we’re having to constantly move in and out of restrictions.’

Meanwhile, a trio of leftwing Labour politicians have started a new campaign group that accuses the Government of sacrificing the region to protect the city of London.

The No Holding Back group, formed by former shadow ministers Ian Lavery and Jon Trickett, plus ex-Labour MP Laura Smith, published a report today on the way restrictions before this lockdown hit poorer regions.

They argue that the UK needs ‘blanket tier four restrictions for the entire country until the curve has been crushed’.

In the foreword they attack Mr Johnson, saying he has ‘treated held-back communities in northern England as second-class citizens’.

‘His decision to keep tough restrictions for the north for longer while neglecting to place London in Tier 3 shows that he has no regard for the difficulties faced by our constituents,’ they said.

‘With tier restrictions commencing on 3rd December (sic), Boris Johnson had a chance to show he had learned from his blatant discrimination in trying to foist 67 per cent furlough on Northern England while pivoting to 80 per cent furlough when the lockdown was extended to the South of England.

‘Not only did he fail, but he repeated that discrimination, again leaving us in no doubt of his disregard for held back communities. Like ours.’