Jeremy Corbyn sits on the fence AGAIN over Brexit

Jeremy Corbyn has suggested he would not choose a side in a second Brexit referendum prompting accusations that the Labour leader wants to continue sitting on the fence over the UK’s departure from the EU.

Mr Corbyn said if he is made prime minister at the next general election he will negotiate a new Brexit deal with Brussels and then put it to the people.

His referendum would pitch the new Brexit deal against Remain but Mr Corbyn hinted he would not advocate for either, prompting fresh fury in the Labour ranks amid fears the party will be ‘steamrollered’ at the next election.

Mr Corbyn’s political opponents accused him of lacking the ‘courage’ to adopt a position and suggested he was guilty of a ‘shameful abdication of leadership’.

Meanwhile, Labour’s Brexit divisions were further highlighted today as Mark Drakeford, the First Minister of Wales, wrote to Welsh Labour members to say his wing of the party will campaign to Remain.

Mr Corbyn’s comments come just days before the start of Labour’s annual conference in Brighton when he is expected to face fresh pressure from activists and MPs to formally campaign for Remain.

His decision to set out his stall before conference gets underway on Sunday is likely to inflame tensions within Labour’s Remainer core who are increasingly frustrated at their leader’s failure to choose a side on Brexit.

Mr Corbyn’s stance will also infuriate many Labour Leave voters who are unlikely to view his offer of a soft Brexit based on being in a customs union with the EU as a sufficiently dramatic break from the bloc.

Hardline Eurosceptics will view the prospect of having to choose between staying in the EU and a soft Brexit as no choice at all.

Jeremy Corbyn, the Labour leader pictured in Kirkcaldy on September 14, said a second referendum should offer voters the choice of a ‘credible leave option’ and Remain

Writing in The Guardian, Mr Corbyn said he would negotiate a ‘credible leave option’ which would then be on a second referendum ballot paper alongside Remain.

‘A Labour government would secure a sensible deal based on the terms we have long advocated, including a new customs union with the EU; a close single market relationship; and guarantees of workers’ rights and environmental protections,’ he said.

‘We would then put that to a public vote against Remain, and I pledge to carry out whatever the people decide, as a Labour prime minister,’ he added.

The final comment suggests Mr Corbyn would act as a kind of independent referee during a second referendum but that he could allow MPs and activists to campaign how they wanted.

Tweeting a link to his comment piece, Mr Corbyn said ‘Labour will stop a No Deal Brexit, deliver a public vote and put power back into the hands of the people’.

However, he did not address the thorny issue of how he would campaign in that vote, further adding to the impression that he would stay on the sidelines.

Today he repeatedly declined to clarify whether he would back Remain or Leave as he took part in a broadcast interview.

‘My job as prime minister would be to deliver that option that’s chosen by the British people,’ he said.

Pressed if he would remain neutral in the campaign, he said: ‘As prime minister I’m offering the people a choice – the only party that’s doing so.’

His comments sparked a swift and furious outcry both from inside Labour and from Mr Corbyn’s political opponents.

Owen Smith, the former Labour leadership challenger, mocked Mr Corbyn and suggested the man who beat him for the party’s top job in September 2016 wanted to be ‘present but not involved’ on Brexit.

He tweeted: ‘Better late than never on a People’s Vote, Jeremy. But reports elsewhere that you plan to be “neutral” on Remain v Leave can’t be right, can they?

The NEC supported a motion calling for Labour Students to effectively be disbanded and replaced with a new organisation.

A Labour Party source said: ‘The NEC has asked staff to draw up proposals for a reformed student organisation that complies with the rules and represents the tens of thousands of students in our party.’

The NEC motion was put forward by the founder of the Jeremy Corbyn supporting Momentum group, Jon Lansman, and was approved just days before the start of the annual Labour Party conference.

Labour Students denied claims the organisation had not paid its affiliation fees on time.

A statement from the group issued before the NEC vote said: ‘This motion is being brought forward as we approach a general election, with no alternative proposals for how the Labour Party organises and engages with students.’

Critics of Labour Students believe the group was out of step with Mr Corbyn’s political ambitions.

‘You surely can’t be present but not involved on the biggest issue of our era?’

Another Labour MP told MailOnline: ‘So we are still sitting on the fence. Because that has worked so well so far.’

Labour former Cabinet minister Alan Johnson, who led the Labour In campaign during the 2016 referendum, said: ‘My fear is if you go into the next election without Europe being sorted it’s going to be the most toxic, horrible, nasty and unpredictable election that probably we’ve ever had in this country.

‘And the people in the middle that are trying to suggest “let’s try and get a deal here somewhere” are going to get mowed down.

‘There’s an awful lot wrong with it. My main fear is Labour will be steamrollered by the two extremes if they’ve got this neither one thing or the other thing in the middle.’

Labour MP Phil Wilson, a supporter of the People’s Vote campaign, welcomed Mr Corbyn’s decision to back a second referendum in all circumstances but said he needed to go much further.

He said: ‘There will be many people in the party worried that hints Jeremy might stay neutral in a final say referendum would not really be a sustainable position.

‘Even Harold Wilson, who took a back seat in the 1975 referendum, made it clear he wanted to stay in Europe.’

Meanwhile, Nicola Sturgeon, the SNP leader and Scottish First Minister who is vehemently against Brexit, responded with anger.

She said: ‘”Staying neutral” on Brexit is a shameful abdication of leadership.’

Lib Dem leader Jo Swinson who is also fighting to stop Brexit echoed a similar sentiment as she piled in and said: ‘The biggest issue facing the country in decades and Jeremy Corbyn wants to sit on the sidelines. He is betraying Remain voters.’

Tory MP Tobias Ellwood accused Mr Corbyn of lacking the ‘courage to offer a view’ on the ‘biggest issue in a generation’.

While Mr Corbyn appears content to remain neutral in a second referendum, Mr Drakeford, the Welsh Labour leader, today fully committed to fighting to keep the UK in the EU.

He wrote to his members to say that Welsh Labour ‘must and will campaign to remain in the EU’.

Mr Drakeford said: ‘Any type of Brexit, even the softest possible, will cause potentially irreparable damage to Wales and its economy.’

Mr Corbyn’s latest remarks put him on a collision course with numerous members of his frontbench who want Labour to campaign to Remain in a second referendum.

Tom Watson, John McDonnell, Emily Thornberry and Sir Keir Starmer have all said they would campaign to Remain. 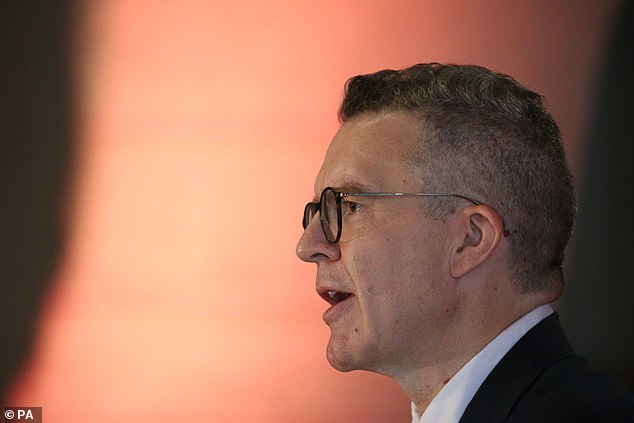 Tom Watson, the deputy Labour leader pictured in London on September 11, has called for a second referendum to be held before a general election 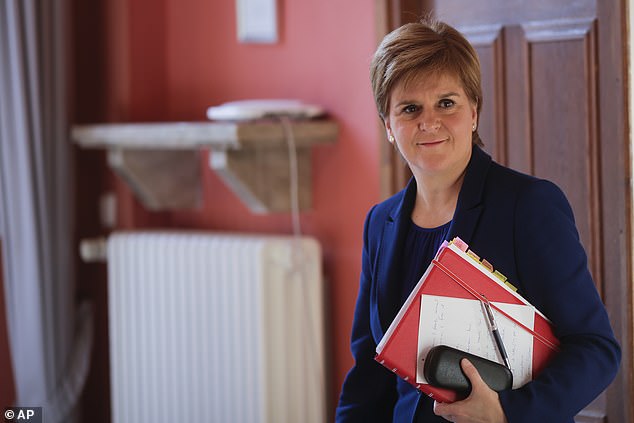 Mr Watson, the deputy Labour leader, has gone much further and called for a second referendum to be held before a general election.

He said earlier this month that the 2016 Brexit vote was no longer ‘valid’ and the ‘circumstances are so changed’ that the decision to leave the EU should be revisited.

Mr Corbyn is adamant that a second referendum should only take place after a general election.

Ms Thornberry was ridiculed during a recent appearance on the BBC’s Question Time programme after she said Labour would negotiate a new deal with the EU but she would then campaign at a referendum to reject that deal.

Mr Corbyn’s latest comments appear to suggest that the party is now on the path to formally ditching its 2017 manifesto position on Brexit.

Ahead of that vote Labour said it ‘accepts the referendum result’ and that it would ‘seek to unite the country around a Brexit deal that works for every community in Britain’.