Tom Watson tore into Jeremy Corbyn’s attempt to fudge Labour’s Brexit policy today – as he mocked an abortive bid to oust him as deputy leader.

Mr Watson said ‘Labour is a Remain party’ amid an all-out revolt by activists designed to bind the leader’s hands on the crucial issue.

Mr Corbyn today refused to give up on his favoured approach of staying ‘neutral’ on the biggest issue facing the country in a looming general election.

However, he admitted that he will have to obey the will of party members if he loses a battle on the policy at the annual conference in Brighton.

Mr Watson told a rally at a fringe event this afternoon that despite having famously lost a lot of weight, he was ‘no pushover’ and would be ‘Remaining’ in spite of the botched efforts to abolish his elected post.

Shadow foreign secretary Emily Thornberry also waded into the row, telling activists: ‘if you back socialism, then why on earth would you back Brexit?’

But in a sign of the growing divisions at the top of the party over Brexit, union boss Len McCluskey said any shadow cabinet members who fail to sign up to Mr Corbyn’s approach should ‘step aside’. 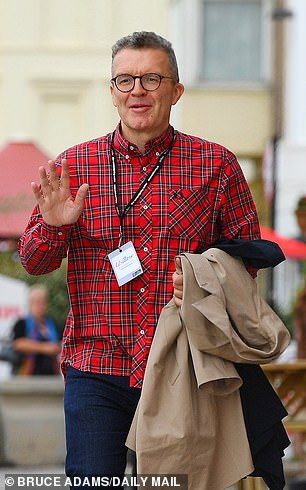 Jeremy Corbyn (pictured left today) admitted on the BBC’s Andrew Marr show that he will have to obey the will of Labour members if he loses a battle on Brexit policy at the annual conference in Brighton. Tom Watson (right) insisted Labour is a ‘Remain party’ 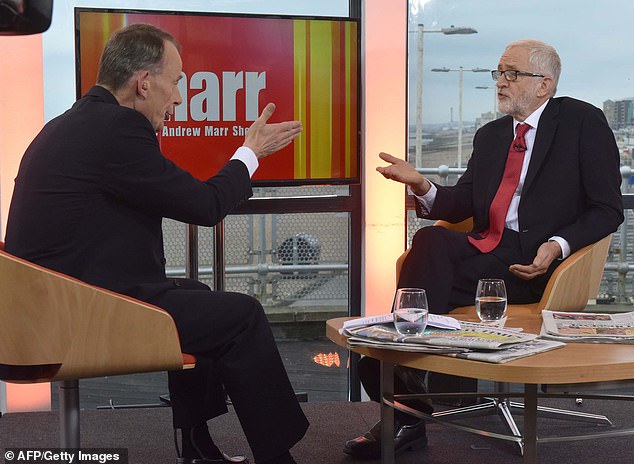 Mr Corbyn again ducked and weaved over Brexit as he gave an interview to the BBC’s Andrew Marr show earlier today.

Mr Corbyn would not say whether he thought it was possible to secure a Brexit deal that would be preferable to staying in the bloc.

‘What we have said is that we would want to hold a consultation, a special conference of our party at the point that we have got this offer from the EU, we’ve got this as a remain – and hopefully reform – option,’ he said.

‘Because I do think even those that are strongly in favour of remain would recognise the EU needs to have some reforms.’

A huge test of strength is going on behind the scenes in Brighton over whether the party should take a full-heartedly pro-Remain position.

A ‘compositing’ meeting later is due to decide what motion will be debated and voted on at the gathering.

Mr Watson told a rally in Brighton: ‘We are a remain party. We are a European Party. We are an internationalist party. 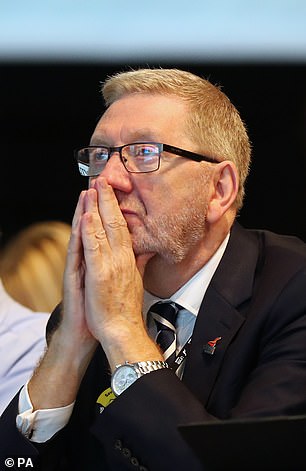 Len McCluskey, pictured in Brighton at TUC conference earlier this month, said shadow cabinet members should ‘step aside’ if they feel unable to back Mr Corbyn’s Brexit policy

‘That is who we are. Not perfect, not pure. But overwhelmingly committed to Britain remaining in Europe.

‘By backing a people’s vote, by backing remain, I am sure we can deliver the Labour government the people of this country so badly need.’

But Mr McCluskey, a leading ally of Mr Corbyn, today demanded shadow cabinet members show loyalty to the Labour leader and back his Brexit policy – or quit.

He told Sky News: ‘Well there are challenges to speak to the electorate, I will accept that but we must go in to an election united and when we have a policy on Brexit and Jeremy Corbyn makes it clear that that is the policy then that is what leading members of the shadow cabinet should argue for.

‘If they find that they can’t argue for it because they feel strongly, well of course they have that right but they should step aside, step aside from the cabinet, the shadow cabinet which will become the cabinet, and they can argue whatever they want but the policy that might appeal to them, to Emily and to anybody else, is support your leader.’

The Lib Dems declared at their conference last week that they will simply cancel Brexit without a referendum if they win power at an election. 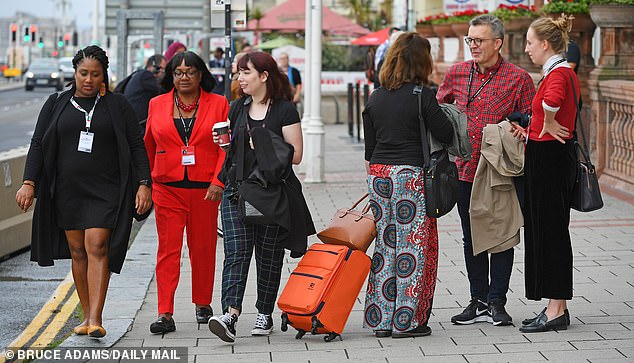 A poll has found the Tories have opened up a 15-point lead over Labour, and two-thirds of the public disapprove of his EU policy.

A bid by Mr Corbyn’s allies to oust his Remain-backing deputy had to be humiliatingly aborted yesterday.

He said this morning that ‘of course’ he will obey activists if they vote for a motion ordering the party to support cancelling Brexit.

Mr Corbyn – known to be a long-standing Eurosceptic – was embroiled in bad-tempered clashes with the Andrew Marr today as he denied he is on the verge of quitting.

The Labour leader swiped that the presenter was one of the people ‘wishing’ to get rid of him – and at one point demanded: ‘What are you trying to say?’

He also admitted that there are raging tensions among his close team, after one key aide quit condemning a ‘blizzard of lies’ and ‘class war’ in Mr Corbyn’s office.

The extraordinary exchanges came amid claims Mr Corbyn’s allies have begun triggering succession plans after deciding they are ‘past the high-water mark of Corbynism’.