Jeremy Corbyn was warned today that failing to quickly stamp out the anti-Semitism crisis engulfing Labour could ‘permanently damage’ the party.

He came under a concerted attack on three fronts this morning over his handling of the racism scandal that is tearing the opposition apart.

In a scathing letter the Board of Deputies of British Jews said that a ‘significant amount of the fault’ for the current crisis lay directly with the opposition leader.

After a heavily critical BBC Panorama documentary implicated his top team in the party’s handling of complaints the Board’s president Marie van der Zyl also said that ‘senior staff such as Seumas Milne and Karie Murphy, also shoulder a significant share of the blame’ and ‘must take personal responsibility for resolving this crisis’.

Mr Corbyn and his frontbench team were also been blasted by the Jewish Leadership Council ahead of a special shadow cabinet meeting next week which will discuss the anti-Semitism crisis.

The Panorama documentary had claimed that anti-Semitism complaints were taken over by core members of Mr Corbyn’s team instead of the party’s disciplinary team.

Ms van der Zyl: ‘We urge you to take this opportunity to turn the tide. The alternative is to leave Labour permanently damaged as an institutionally racist party.

‘Our community and our country will not forgive any further failure.’ 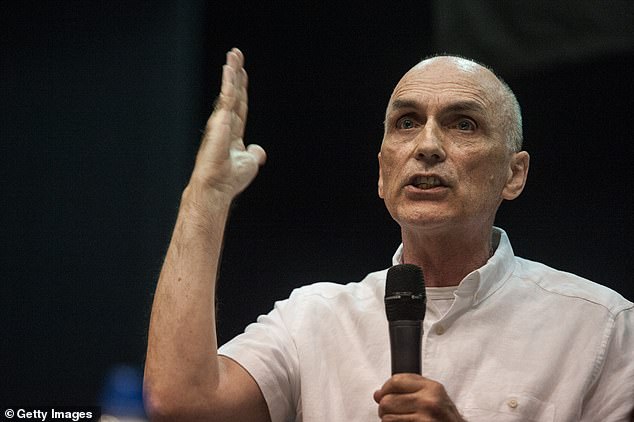 Chris Williamson, the Derby North MP and supporters of Mr Corbyn, has been suspended from the party over anti-Semitism claims

Both men are supporters of Mr Corbyn and have been suspended from the party over anti-Semitism claims.

The board suggested their cases be completed before the end of the summer.

‘Outstanding and future cases should be brought to a swift conclusion under a fixed timescale,’ Ms van der Zylk wrote.

‘For example, the cases of Chris Williamson and Peter Willsman, whose offences are all on the public record, should be concluded in the next fortnight.

‘Diaries should be cleared and funds made available to make this happen. On the basis of what we know, permanent exclusion should be the result of these cases.’

The letter has been sent to shadow cabinet members, the Parliamentary Labour Party and the party’s national Executive Committee.

She also highlighted the sanctions given to proven anti-Semites with the expulsion from the party of Alastair Campbell, the former Tony Blair spin doctor, for voting Lib Dem in the local elections in May.

‘It cannot be right that virulent anti-Semites are extended more tolerance than party members who have supported other political parties, and the provision of automatic and permanent exclusion should be introduced as an option among the sanctions for racism complaints’ she said. 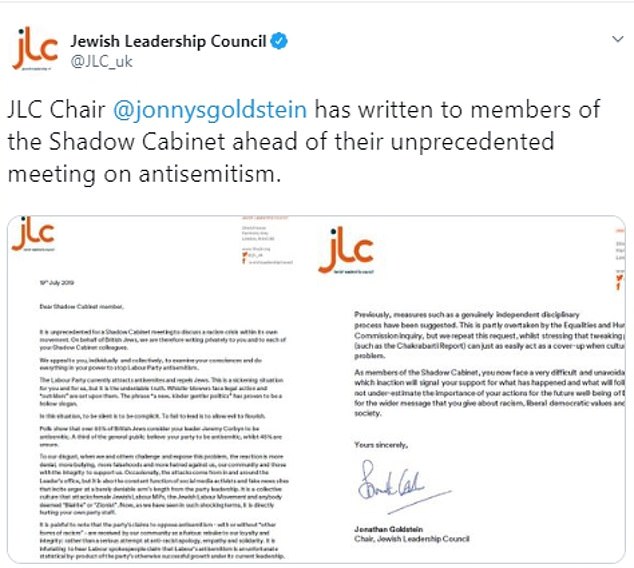 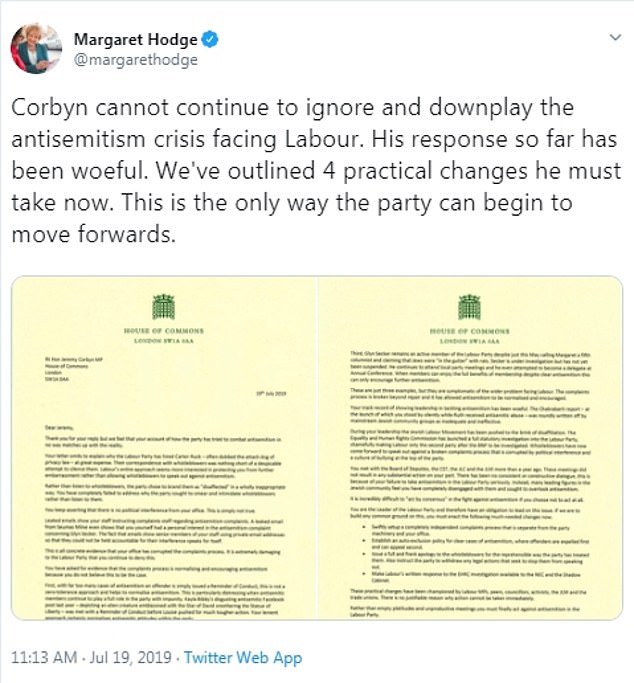 The JLC said that it was ‘unprecedented’ for a shadow cabinet to meet to ‘discuss a racism crisis within its own movement’.

Writing to the MPs in the top opposition team chairman Jonathan Goldstein branded the current situation ‘sickening’, adding: ‘In this situation, to be silent is to be complicit. To fail to lead is to allow evil to flourish.’

Labour has insisted that it is taking action against anti-Semitism and has attacked the accuracy and impartiality of the BBC Panorama documentary.

A party spokeswoman said: ‘The Labour Party is implacably opposed to antisemitism and determined to root it out of our movement and our society.

‘We stand in solidarity with Jewish people and we are fully committed to the support, defence and celebration of the Jewish community and its organisations.

‘We are taking decisive action against antisemitism, doubling the number of staff dedicated to dealing with complaints and cases, and swiftly suspending and taking robust action against individuals.

‘Since Jennie Formby became General Secretary, the rate at which antisemitism cases have been dealt with has increased more than four-fold. We will continue to act against this repugnant form of racism.’