Jeremy Corbyn is set to take power due to Theresa May’s failure to deliver Brexit by March 29, a polling analysis has revealed.

A general election would see the Conservative Party losing 59 seats, meaning Mr Corbyn’s party would be left the largest in the House of Commons, a Sunday Telegraph poll of polls claimed.

President of the British Polling Council Professor Sir John Curtice said Brexiteers had been ‘drawn back to either Ukip or Nigel Farage’s newly launched Brexit Party’.

Former Conservative leader Iain Duncan Smith and Work and Pensions Secretary Amber Rudd are among those who would be at ‘high risk’ of losing their seats as anger among Tory voters over the Government’s ‘failure to deliver Brexit’ sharpens, experts said.

Jeremy Corbyn is set to take power due to Theresa May’s failure to deliver Brexit by March 29, a polling analysis revealed

An Electoral Calculus poll of polls, including 8,561 people spoken to between April 2 and 11, found that Labour would become the largest party in the Commons, winning 296 seats to the Conservatives’ 259.

‘It wasn’t to placate his own Eurosceptic MPs, instead it was to stop Conservative voters defecting to pro-Brexit parties.’ 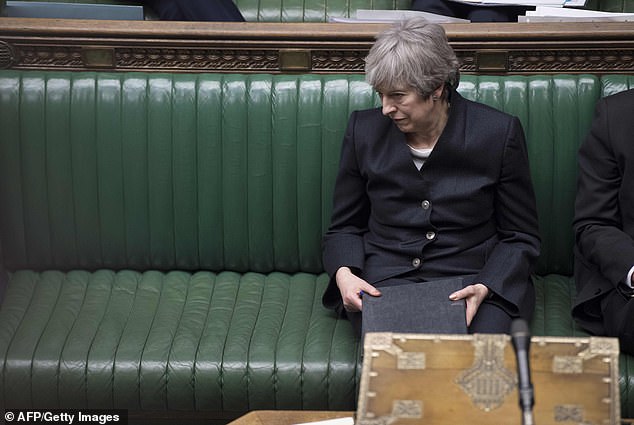 A general election would see the Conservative Party losing 59 seats, meaning Mr Corbyn’s party would be left the largest in the House of Commons, the poll of polls revealed

Mr Baxter added that process seems to have restarted, with the Tories beginning to suffer for it.

The data confirms the findings of another poll, released this weekend, which revealed that support for the Conservatives had sunk to its lowest level in six years – with pro-Leave parties, such as Nigel Farage’s new Brexit Party, soaking up much of the dissatisfied voters.

A YouGov poll for The Times predicted the Conservatives would win only 28 per cent of the vote in a general election, compared to Labour’s estimated 32 per cent.

The Brexit Party would score an impressive 8 per cent which, when combined with Mr Farage’s former party Ukip on 6 per cent, means the ardently pro-Leave parties would be the country’s third largest political force with 14 per cent of the vote. 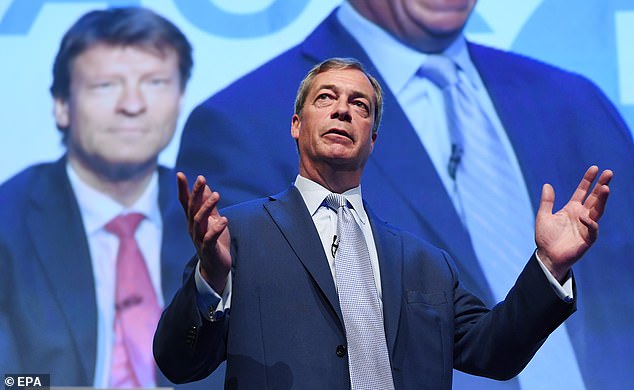 Nigel Farage told a packed auditorium in Birmingham: ‘We are lions being led by donkeys’

This would increase to a combined total of 29 per cent – 15 for the Brexit Party and 14 for Ukip – in potential European Parliament elections, compared to Labour’s 24 per cent and the Tories’ 16, according to the poll.

Conservative Party lawyers ignited the possibility for a coup against Mrs May within months, as officials advised the party’s 1922 Committee that the panel could rewrite the rules that stop MPs carrying out more than one vote of no confidence attempt each year, according to reports.

The news comes after Nigel Farage yesterday whipped up hardline Eurosceptics as he vowed his new party would cause an earthquake among ‘the career political class’, telling a packed auditorium in Birmingham that ‘we are lions being led by donkeys’.

The former Ukip leader, who turned his back on the party for ‘lacking good people’, tore into the Government for its handling of Britain’s departure, saying: ‘I find myself standing here today in my sixth European election campaign.

‘But I’m damned if after 25 years I’m going to roll over and let these politicians do this to us!