Jeremy Corbyn’s brother has called protestors who glued themselves to the Labour leader’s house this week ‘deranged’.

He waved one banner that denounced global warming as a ‘hoax’ and another calling greenhouse gas carbon dioxide a ‘gas of life’.

Protestors challenged his climate change denial and made it clear he was not part of the group.

Piers Corbyn, who is the Labour leader’s older brother, believes that accepted science on man made climate change is a ‘cover up’ that exists to push up fuel prices.

Asked about the Extinction Rebellion activists, who targeted his brother’s home on Wednesday, he said: ‘I think it was deranged.’

Mr Corbyn’s older brother took part in a tiny counter-protest calling increased carbon dioxide levels an effect, rather than a cause, of climate change

Condemning the protests, he added: ‘This is disrupting traffic and stopping people going to work, the police should have moved them on ages ago.’

Piers Corbyn is a physicist and meteorologist who runs a weather forecasting firm called WeatherAction that has been questioned for its unusual methods of predicting weather patterns.

He is adamant that man-made climate change is a hoax, saying in 2008: ‘CO2 has never driven, does not drive and never will drive weather or climate.

‘Global warming is over and it never was anything to do with CO2 – CO2 is still rising but the world is now cooling and will continue to do so.’

Waterloo Bridge has now been blocked by demonstrators for five days. 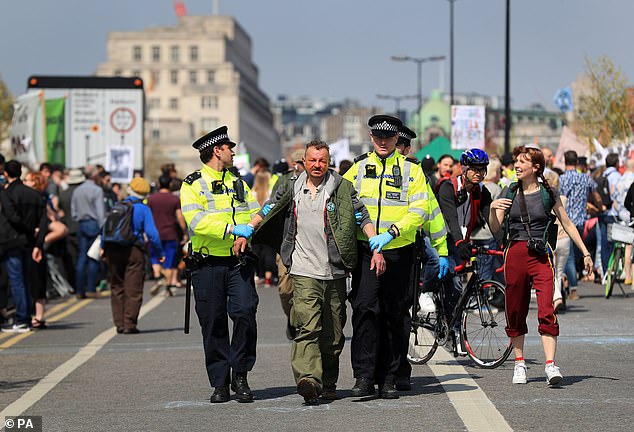 Ten people had been charged by the Met by Thursday night and three others arrested by British Transport Police were remanded in custody after they appeared in court accused of obstructing trains at Canary Wharf.

More than 680 people have been arrested.

Routes are also blocked around Parliament Square and Marble Arch, and Home Secretary Sajid Javid has urged police to use the ‘full force of the law’.

‘I totally condemn any protesters who are stepping outside the boundaries of the law,’ Mr Javid said.

‘They have no right to cause misery for the millions of people who are trying to lead their daily lives.’

Ken Marsh, chairman of the Metropolitan Police Federation, told BBC Breakfast the protests were ‘very, very difficult’ to handle and could cost ‘millions’.

XR has pledged to continue causing disruption until its demands are met.

They want the Government to declare a climate emergency and take action to reduce greenhouse gas emissions to net zero by 2025.