Jeremy Corbyn, left, went on holiday to Romania this year and ran into fans, right, of the Scottish football club Celtic

Famous as the home of blood-sucking vampire Count Dracula, Transylvania is not renowned as a popular destination for British families on their summer holidays.

But perhaps it should be no surprise that Jeremy Corbyn opted for a break in central Romania this year – after all, he has enjoyed previous trips to former Communist Eastern bloc countries.

Earlier this month, the Labour leader and his third wife Laura Alvarez toured Transylvania for a week in a hire car, starting their holiday in the city of Cluj-Napoca after a three-hour flight from Luton Airport with Wizz Air on August 7.

During the flight, he met fans of the Scottish football club Celtic who were travelling to see their club play CFR Cluj in a Champions League qualifier.

They invited Mr Corbyn to the match that night and once word reached directors of the club that he was interested in attending, he was allocated tickets.

Arsenal fan Mr Corbyn posted a picture of himself and Ms Alvarez in the directors’ box from where they watched the teams draw 1-1.

One supporter later tweeted a picture of himself with the Labour leader in a street near the stadium and joked that Mr Corbyn knew every verse of Broad Black Brimmer – a pro-IRA song sung sometimes sung by Celtic fans. 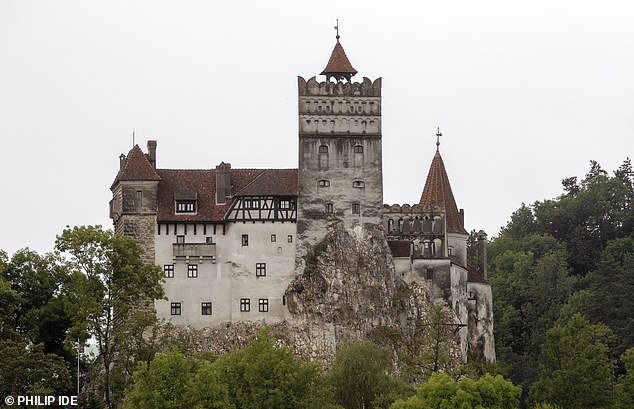 The Labour leader is also believed to have visited the imposing Bran Castle, pictured, known as Dracula’s castle during his trip away with his third wife

A Labour spokesman last night denied the claim, saying: ‘I think it’s a wind-up. It’s absolutely not the case.’

The Celtic directors were being escorted by Cluj-Napoca tour guide Cosmin Rusu, 43, who also became acquainted with Mr Corbyn.

Recalling the evening of the match, he told The Mail on Sunday: ‘The head of security at Celtic asked me to hand three tickets to someone called Corbyn. I said, “It is an honour to meet you, sir.”

‘He introduced me to his wife, saying, “She is Mexican.” He was dressed in trekking shoes, a polo shirt and a casual jacket. I had never seen a Romanian politician in such an outfit. 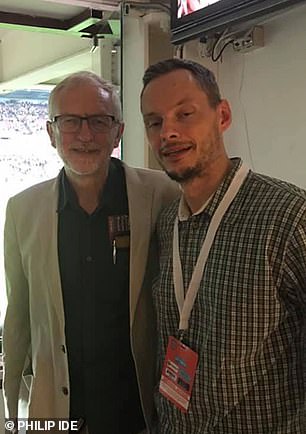 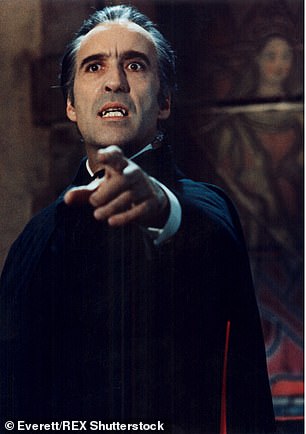 During his flight Mr Corbyn, pictured with tour guide Cosmin Rusu left, met fans of the Scottish football club Celtic who invited him to the match. He also saw the forests of Dracula (pictured right is Christopher Lee as the character) country on the trip 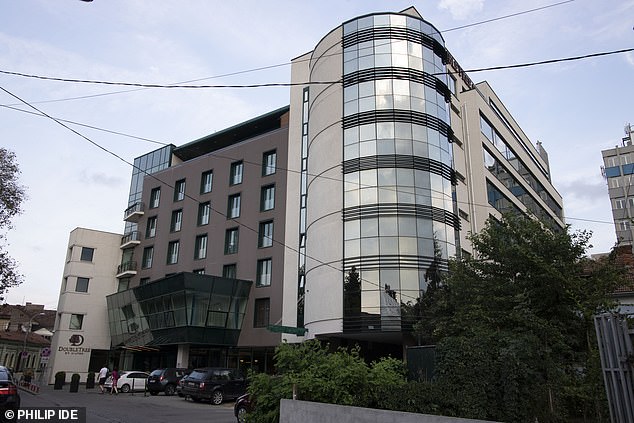 ‘During the match he was very excited and was cheering for Celtic. He said that he had been on holiday in Bulgaria last year and that this year he wanted to come to Romania. He asked me if I could help him with information and that he needed a map of Transylvania.

‘I think his wife was going to be map reading. He said, “My wife is responsible for all the technicalities of travel.” ’

Mr Rusu, who also works as a university lecturer, told Mr Corbyn that he could buy guide books written in English at a bookshop in the city centre.

After the game, it is believed that Corbyn and his wife headed back to their hotel – the £110-a-night Doubletree Hilton – without joining Celtic fans who were drinking and singing in nearby Irish bars. 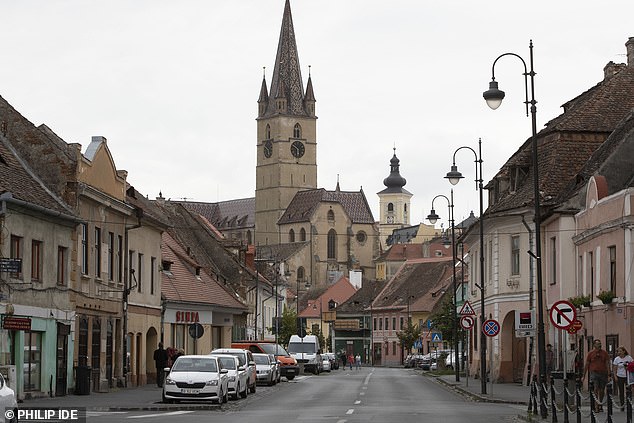 Mr Rusu, who also works as a university lecturer, revealed that Mr Corbyn told him his wife was ‘responsible for all the technicalities of travel’. Pictured is the old town of Sibiu in Romania 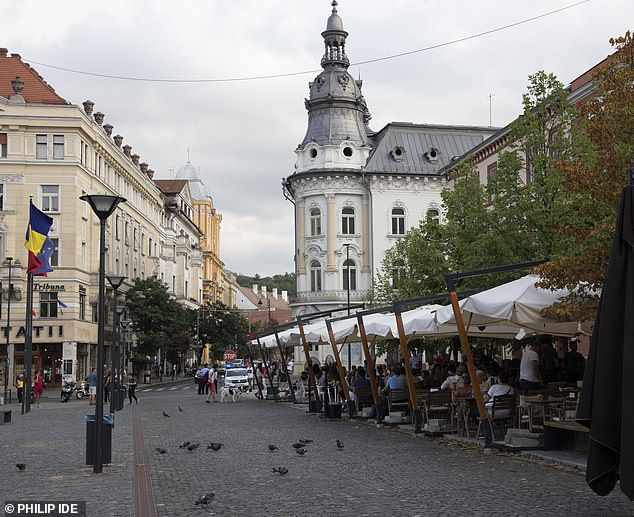 After two days in Cluj-Napoca (pictured is the old town), Mr Corbyn and his wife are believed to have visited the medieval cities of Sibiu and Brasov

The following morning, Mr Rusu took the Labour leader to the book shop he’d mentioned the previous evening. During the 15-minute stroll, he explained some of the city’s history, mentioning King Matthias Corvinus, the 15th Century ruler of Hungary and Croatia who was born in Cluj-Napoca.

‘Mr Corbyn seemed to be amused that his name was similar to Corvinus,’ he added. After two days in Cluj-Napoca, Mr Corbyn and his wife are believed to have visited the medieval cities of Sibiu and Brasov, and the surrounding countryside which features forests inhabited by wolves and brown bears as well as the imposing Bran Castle known as Dracula’s castle.

Set on a rocky outcrop overlooking a village and fringed by the Carpathian mountains, the bleak 14th Century fortress inspired Bram Stoker to publish his Gothic horror novel Dracula in 1897.

The castle is now a major tourist attraction with more than a million people a year visiting its rooms packed with medieval torture and execution equipment.

Shunning more traditional Mediterranean holiday resorts would have saved Mr Corbyn a fortune – a three-course evening meal for two in a smart country restaurant in Romania costs less than £20.

…well, he does have a very strange taste in holidays

Jeremy Corbyn is no stranger to taking budget holidays in unglamorous corners of Eastern Europe.

The Labour leader’s first wife, Jane Chapman, revealed how the pair endured a miserable camping holiday during the summer of 1976 as they toured the region on a rickety 250cc motorbike.

While Ms Chapman wanted to sleep in a comfortable bed at night and dine in interesting restaurants, Mr Corbyn insisted on staying in a small tent and cooking tins of baked beans on a single-ring gas stove, a biography of the Labour leader disclosed earlier this year. 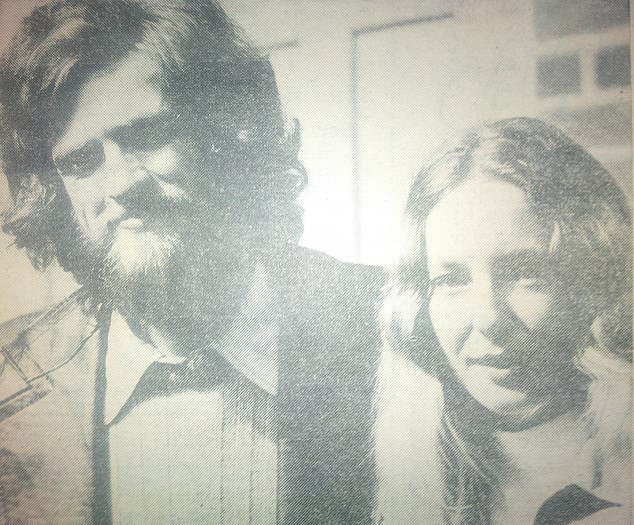 Jeremy Corbyn’s first wife Jane Chapman, pictured together in 1974, has previously revealed the pair endured a miserable camping holiday during the summer of 1976

Their trip, at the height of the Cold War, involved riding from Austria through the Iron Curtain and into Communist-controlled Czechoslovakia. This meant crossing a frontier bristling with minefields, electrified barbed wire and guard towers.

Their Czech-made motorbike broke down after they arrived in the Eastern-bloc country, much to Mr Corbyn’s anger, the biography by journalist Tom Bower revealed.

It had been made exclusively for export and Czech garage mechanics struggled to fix it and obtain spare parts. The couple’s tent was also flooded during a rainstorm in Prague, the Czech capital. Mr Corbyn grudgingly agreed to spend the night elsewhere – but in a student hostel, rather than in a hotel.

He was reportedly indifferent to the beauty of some of Europe’s most impressive sites. 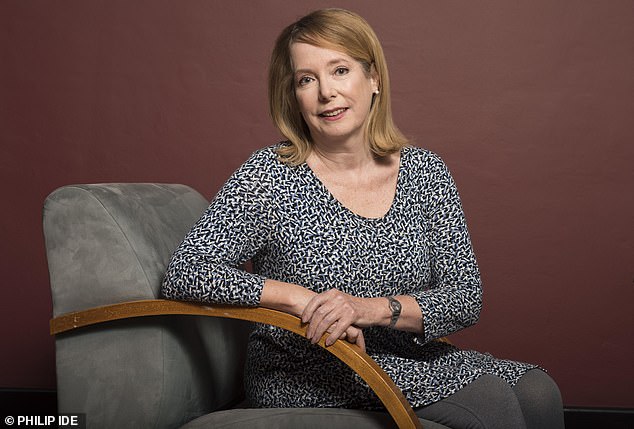 During the trip Professor Chapman, pictured said Mr Corbyn insisted on staying in a small tent and cooking tins of baked beans on a single-ring gas stove

While in Vienna, Austria’s stunning capital, he refused to enter the Schonbrunn Palace because it was ‘royal’, while he said the city’s beautiful Ringstrasse, a three-mile-long grand boulevard, was ‘capitalist’.

‘He walked past all the museums and art galleries, and found no pleasure in medieval towns,’ Mr Bower wrote in his biography, Dangerous Hero: Corbyn’s Ruthless Plot For Power.

In August 2017, Mr Corbyn cycled along the Adriatic coast in Croatia and was pictured strolling round Dubrovnik. Last summer he enjoyed a ‘staycation’ in Somerset.