A row erupted last night over an anti-Semitic slur against a Jewish MP – posted by a social media account belonging to the right-hand man of Jeremy Corbyn’s union backer.

The remark, which Mr Lewis says is a clear anti-Semitic attack, was written under a routine pledge he made to boost local schools, transport and policing. 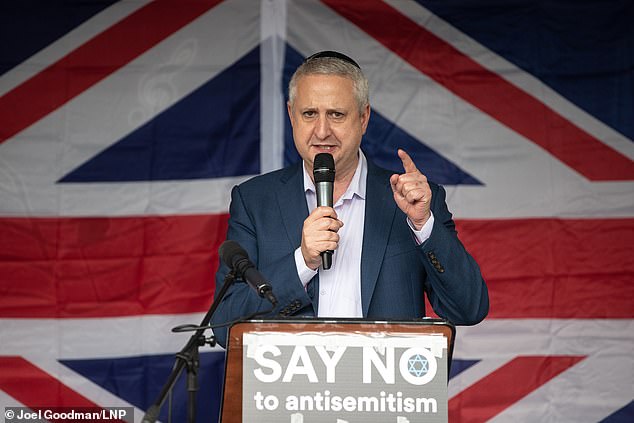 The remark, which Mr Lewis (pictured) says is a clear anti-Semitic attack, was written under a routine pledge he made to boost local schools, transport and policing

He said he did not know how it got there, adding: ‘I have not posted on his website for as long as I can remember. I wouldn’t put anything like that in a million years. I don’t even know what it means.’

Shortly after being contacted by the Daily Mail, Mr Woodhouse removed the ‘juju’ insult from the Facebook page. A Unite spokesman said Mr Woodhouse had emailed Mr Lewis to apologise for the fact that a hacker had posted the word.

It came after it emerged that Mr Woodhouse and Mr McCluskey’s union has given £3million to Labour funds. 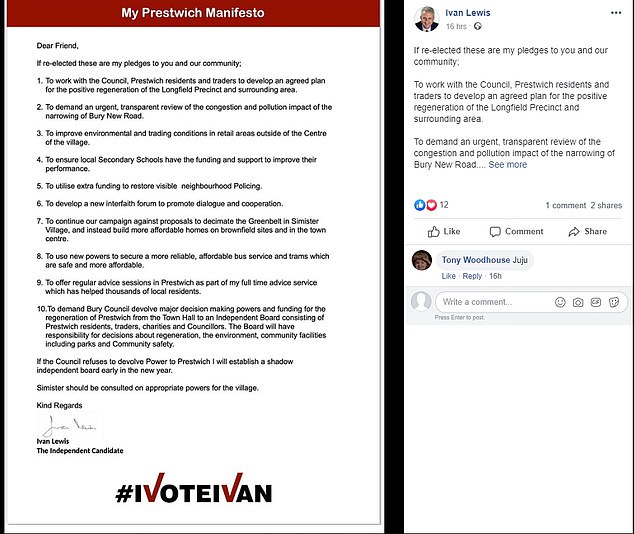 The term ‘juju’ is more commonly associated with folk magic practised by witch doctors in Africa. But Mr Lewis said it was an ‘anti-Semitic comment’ and called for an investigation.

Mr McCluskey leapt to Mr Corbyn’s defence this week following claims by Chief Rabbi Ephraim Mirvis that the Labour leader is ‘unfit for high office’ due to his handling of anti-Semitism in the party. Mr Lewis, 52, quit the Labour Party over anti-Semitism last year and has accused Mr Corbyn of ‘racism’ by failing to crack down on the problem.

He is standing as an independent in a bid to retain his constituency of Bury South in Greater Manchester.

What about workers’ rights? Anger as Labour axe 20 staff

Labour has told staff at its Newcastle call centre they will lose their jobs – only days after announcing sweeping pledges on workers’ rights.

About 20 staff were told they will lose their jobs after Christmas.

The party told the workers, who were all on fixed-term contracts due to come to an end following the election, that the contracts would not be renewed.

It comes after the party announced in its election manifesto: ‘The next Labour government will transform people’s lives for the better through the biggest extension of workers’ rights in history.’

In the run-up to polling day, some staff have been working six-day weeks telephoning voters to urge them to vote Labour. Outside of election periods their duties include contacting party members to ensure their subscriptions are up to date. One staff member told The Guardian that the workers felt let down, adding: ‘How can I go into the polling station now and vote Labour? It makes me feel like a fool.’

Labour has also said it will ‘increase protection against redundancy for people wherever they work’.

A source at Labour’s National Executive Committee told the BBC there was ‘widespread anger’ at the cuts because of the party’s commitments on workers’ rights.

Its manifesto states: ‘We are proud of the trade union movement’s historic achievements in giving people a voice at work through collective action.

‘It is not just part of our history; it is also part of our future. Only by shifting the balance of power back towards workers will we achieve decent wages, security and dignity at work.’

His Labour opponent is Lucy Burke, a staunch unionist who was chosen to fight the seat with backing from Unite and the pro-Corbyn hard-Left Momentum group.

After she was selected she posted a message on social media thanking Unite for endorsing her. Shadow Chancellor John McDonnell joined her on the campaign trail this week.

Bury South constituency has the highest Jewish population outside London – around 10,000 people, 10 per cent of the vote. The Tories are targeting the seat, which was won by Mr Lewis in 2017 with a 5,965 majority.

Mr Lewis last night said he was shocked by the ‘juju’ remark. The comment from Mr Woodhouse’s account was posted at 6.37pm on Thursday, just four minutes after Mr Lewis’s election pledges appeared on his Facebook page.

Mr Lewis, a minister in the Blair and Brown governments, was suspended by Labour in 2017 following allegations that he touched a woman’s leg and invited her to his house at a Labour event in 2010.

He said the suspension was ‘politically motivated’ and resigned from the party a year later accusing Mr Corbyn of fostering ‘Jew hatred’. The row over anti-Semitism in the Labour Party intensified this week when the Chief Rabbi wrote in The Times: ‘The way in which the leadership of the Labour Party has dealt with anti-Jewish racism is incompatible with the British values of which we are so proud – of dignity and respect for all people.

‘It has left many decent Labour members and parliamentarians, both Jewish and non-Jewish, ashamed. What we do know from history is that what starts with the Jews, never ends with the Jews.’ Mr McCluskey told the BBC it was ‘wrong and quite extraordinary that a religious leader should come out and say that’.

He added: ‘Labour has fought, Mr Corbyn has fought, I’ve fought all my life against anti-Semitism. Labour has now very robust procedures to deal with anybody. We don’t want a single anti-Semite in the Labour Party.’ He continued: ‘I sure that’s what he believes if he said it, I just absolutely, fundamentally disagree with him.’

In his letter, Rabbi Mirvis also quoted a claim from the Jewish Labour Movement that 130 cases of anti-Semitism were outstanding, ‘some dating back years’.

Mr Corbyn was taken to task on the anti-Semitism crisis within his party during an interview with the BBC’s Andrew Neil on Tuesday. He refused four times to apologise for his handling of the problem and also said the Chief Rabbi was ‘not right’.

Mike Katz, chairman of Jewish Labour, said after the interview: ‘Sorry really does seem to be the hardest word.’

Mr Corbyn has insisted he has spent his life ‘fighting against racism’.