Jeremy Hunt has promised a £15billion boost in defence spending to see off the rising threat from Moscow.

The Tory leadership hopeful vowed that as prime minister, he would increase defence spending from 2 to 2.5 per cent of national income over five years.

The former health secretary said the extra money would boost Britain’s naval presence in the face of Russian submarine activity, ‘fire up’ the country’s ability to counter cyber-attacks and provide ‘equipment upgrades’ for troops.

Mr Hunt, who made the announcement ahead of Armed Forces Day this weekend, said: ‘I secured a historic funding boost for the NHS and as prime minister I’ll do the same for defence.

Jeremy Hunt, pictured today at Royal Portbury Dock in Bristol, has promised a £15billion boost in defence spending to see off the rising threat from Moscow

‘Increasing defence spending by 25 per cent over five years will show the world a self-confident country ready to defend its interests and values as we embark on an exciting post-Brexit future.’

He added: ‘Everyone knows Britain is a world-leading soft power but to be credible we need to show that we are determined to remain a first-rank military power.

‘My plan for defence will give our brave troops the backing they need and show the world that when it comes to the new threats to Western values, Britain is back and Britain’s voice will be strong.’

Defence Secretary Penny Mordaunt, who is backing Mr Hunt’s leadership bid, said his commitment to properly funding the Armed Forces was one of the reasons she was supporting him.

She added: ‘The first duty of any prime minister and any government is to protect the United Kingdom and further her interests. The British public want us to have clout in the world.

‘We must give the men and women of our Armed Forces what they need to do the job we ask of them. Jeremy’s clear commitment to do that is one reason why he has my support.’ 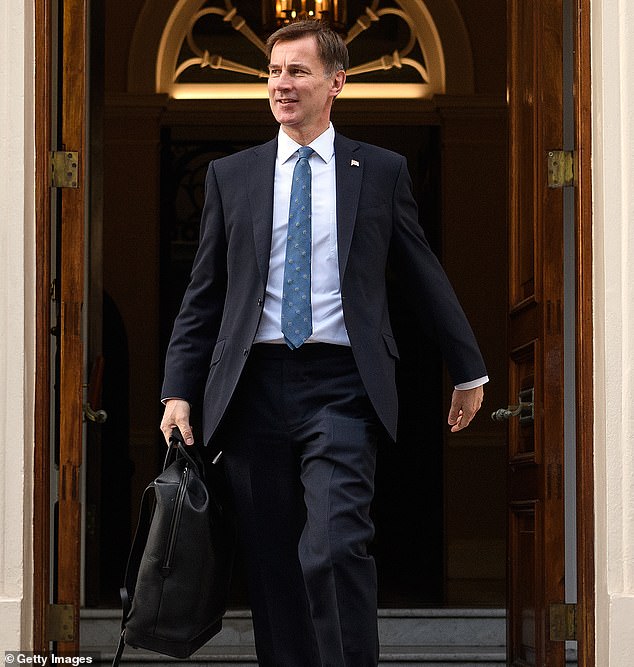 The Tory leadership hopeful, pictured outside his home in London today, said: ‘Increasing defence spending by 25 per cent over five years will show the world a self-confident country ready to defend its interests and values as we embark on an exciting post-Brexit future’

Under Mr Hunt’s plan, defence expenditure would reach almost £54billion by 2023, assuming there is annual GDP growth at 1.5 per cent. Defence spending was 36.9billion in 2017/18.

The UK has achieved Nato’s target of 2 per cent of GDP to be spent on defence in each of the past eight years. Since 2010 only Britain and five other member states have achieved the target.

A Commons watchdog report found this year that the Ministry of Defence had a funding black hole of at least £7billion in its ten-year plan to equip the military. Last month, shortly after becoming the first female Defence Secretary, Miss Mordaunt said she was ‘not going to be shy about asking for more money’.

She also urged the defence establishment to end the ‘vicious cycle’ of strategic reviews that are then not delivered.

The head of the British Army warned earlier this month that the UK and its Western allies risk becoming an ‘irrelevance’ unless they shift their focus from conventional combat hardware to meeting new threats posed by misinformation campaigns and cyber-warfare.

Gen Mark Carleton-Smith said: ‘The rules of warfare are changing and need updating.’