Jeremy Hunt today tore into Google for refusing to cooperate with British police in taking down sick child abuse images while agreeing to Chinese censorship demands.

The new Foreign Secretary accused the tech giant of betraying the ‘values’ they used to be so proud of.

His stern rebuke comes as Google has faced a flood of criticism for failing to take down criminal content and fake news.

Meanwhile, the tech giant has caved to Chinese demands and agreed to build  a search engine for the country which will censor certain content from coming up.

Campaigners have branded the move an ‘alarming capitulation on human rights’ and warned it could be used to spy on dissidents.

And in a strident intervention on Twitter today, Mr Hunt said: ‘Seems extraordinary that Google is considering censoring its content to get into China but won’t cooperate with UK, US and other 5 eyes countries in removing child abuse content.

‘They used to be so proud of being values-driven…’

His remarks are the latest in a series of stinging criticisms of Google and other tech giants for refusing to cooperate with police in taking down content.

MPs have lashed the Google and YouTube, which is owned by Google, for repeatedly failing to take down Jihadist content quickly when alerted to it.

While earlier this year the Commons Speaker warned that Google could be held in contempt of Parliament after it failed to take down a video by the banned fascist group National Action.

And after conducting a lengthy inquiry into the spread of fake news, MPs on the Digital, Culture, Media and Sport committee warned that tech giants are allowing bogus news to be peddled on their sites.

They warned that Britain is facing ‘a democratic crisis founded on the manipulation of personal data, and targeting pernicious views to users, particularly during elections and referenda’. 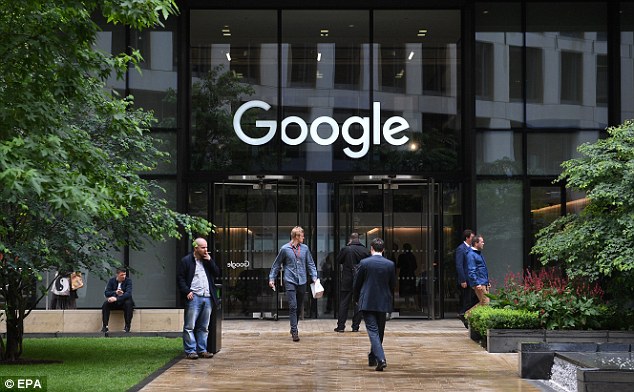 Google (pictured, its headquarters in London’s Kings Cross) has faced a flood of criticism for failing to take down criminal content and fake news

And they called for tech giants to be hit by fresh taxes and be made liable for the  information they are putting up.

The row over Google’s secret plans to build a search engine for China which blacklists certain information deepened this week when more than a dozen campaign groups wrote to the company objecting to it.

China is a one party state and democracy activists are routinely arrested and imprisoned for daring to speak out against the dictatorship.

The letter states: ‘The Chinese government extensively violates the rights to freedom of expression and privacy; by accommodating the Chinese authorities’ repression of dissent, Google would be actively participating in those violations for millions of internet users in China.’

In a statement, Google said it has ‘been investing for many years to help Chinese users, from developing Android, through mobile apps such as Google Translate and Files Go, and our developer tools’.

It added: ‘But our work on search has been exploratory, and we are not close to launching a search product in China.’