He tweeted: ‘Just spoke to Iranian FM Zarif and expressed extreme disappointment that having assured me last Sat Iran wanted to de-escalate situation they have behaved in the opposite way.

‘This has to be about actions not words if we are to find a way through. British shipping must & will be protected.’

Mr Hunt’s comment come after Tehran released footage of the captured tanker docked at a port in southern Iran.

An image released by the Iran Students News Agency (ISNA), which is partially funded by the country’s Government, claimed to show the seized Stena Impero anchored at port in in Bandar Abbas.

At around 11am on Saturday, the ISNA shared the photo on Twitter and said crew members may be summoned for ‘technical questioning’. 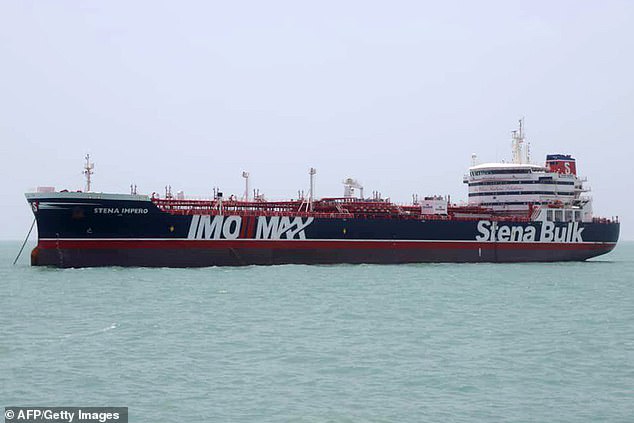 The Stena Impero oil tanker was seized by Iranian authorities while passing through the Strait of Hormuz yesterday. An image released by a Government-funded Iranian news outlet claims to show the seized British tanker Stena Impero anchored in southern Iran 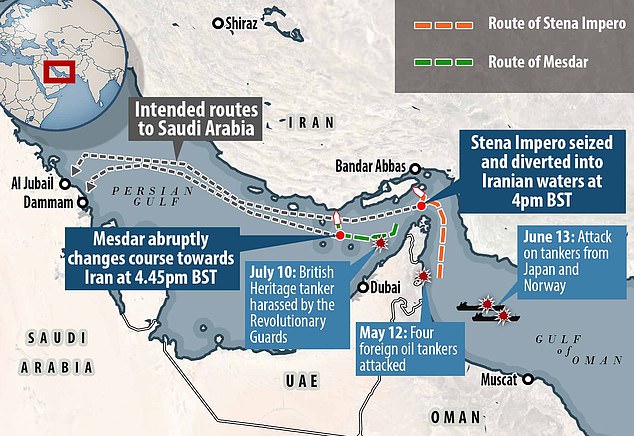 The Stena Impero was surrounded by Iranian Revolutionary Guard forces at 4pm and ordered to head north. The British registered vessel switched off its maritime tracker a short time later. A second British vessel, Medsar, abruptly changed course towards Iran around 4.45pm

The seizures are thought to be in retaliation for the detention of the Iranian Grace 1 tanker by UK forces earlier this month.

The Royal Navy has since deployed frigate HMS Montrose to the Gulf and destroyer HMS Duncan is on her way to join her.

HMS Montrose, which is patrolling the Persian Gulf, raced towards the scene after the British-flagged tanker diverted from its planned course.

Fears were raised that Iranian authorities were trying to seize a UK ship in retaliation for the detention of the Grace 1 tanker.

The Iranian ship was detained off the coast of Gibraltar on July 4. The Foreign Office claiming it had violated EU sanctions by carrying a cargo of crude oil destined for Syria.

But there was no statement from the office of the European External Action Service, the body responsible for conducting EU’s foreign and security policy.

There is also no precedent of shipments of oil to Syria being impounded, which prompted Spain to accuse the UK of acting under the instruction of the US.

The US is trying to freeze all Iranian oil exports to force the country into reopen talks on the nuclear deal signed in 2015, which America pulled out of last year.

Iran’s supreme leader Ayatollah Ali Khamenei called the tanker’s seizure an act of ‘piracy’ on Tuesday and warned the UK to expect a response.

The ship’s captain, chief officer and two second officers were arrested and bailed and an investigation is ongoing.