On to Berlin!’ we used to scream in the Sixties, standing on the car seat and sticking our heads out of the sunroof — pretending to be Monty after D Day in 1944.

To my generation — and that of our parents — Berlin was a place to be visited only by tank.

It is time to think again.

Graffiti: Jeremy Paxman stands in front of art painted on to what survives of the Berlin Wall. The broadcaster was making his first trip to Berlin in almost 30 years 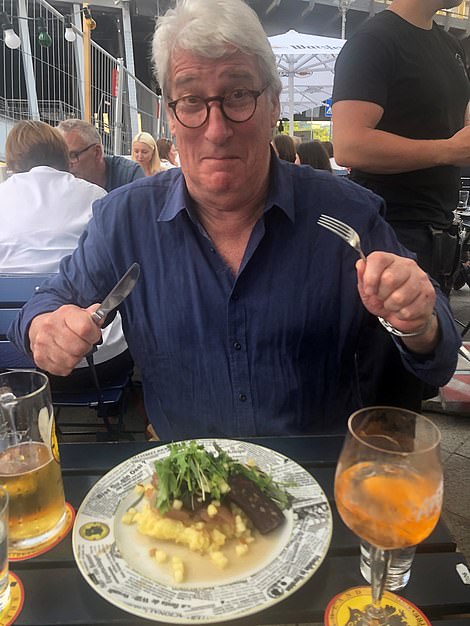 Mein plate: Jeremy tucks in. He noted that German street food has acquired a huge following

For sure, the city has been shorthand for trouble. But we prefer to forget the great German philosophers, composers and writers; we ignore that the British royal family is German.

Instead, we dwell on memories of uniformed nutcases like Kaiser Wilhelm II and Adolf Hitler. From this perspective, it’s been trouble enough keeping the Germans out of Britain. Why take the trouble to visit them at home?

More informed impressions of Berlin do not take us much further: strutting Prussians in pickelhaube helmets; the Berlin airlift, the Berlin Wall, with its thousands of guards in watchtowers, snarling dogs and minefields.

Donald Trump wants to build a wall to keep people out, while in East Berlin, they built one to keep the citizens in.

Then there are the Cold War spy swaps; the exuberance when the wall was pulled to pieces; and the astonishing equanimity with which citizens of the strongest economy in Europe carried the burden of the newly-freed East, and then bailed out the rest of the dysfunctional eurozone.

Berlin is a city with no shortage of history. And that is the first reason to take a visit. You cannot understand Europe without appreciating how different the continent looks when you’re not seeing it from an offshore island.

The capital has less than half the population of London, and the most striking thing about these people is how young so many seem to be.

I had not been there since the night in 1990 when Newsnight staged what was called by the terrifying managing director of television: ‘the worst Outside Broadcast in the history of the BBC.’

The thing was an utter shambles, a point which had been made clear by the veteran correspondent Charles Wheeler, whose uniformed wartime job had been to get his hands on Nazi technology before our heroic Russian allies. Charles had helpfully remarked, live on air, that the programme was ‘pure Monty Python’. 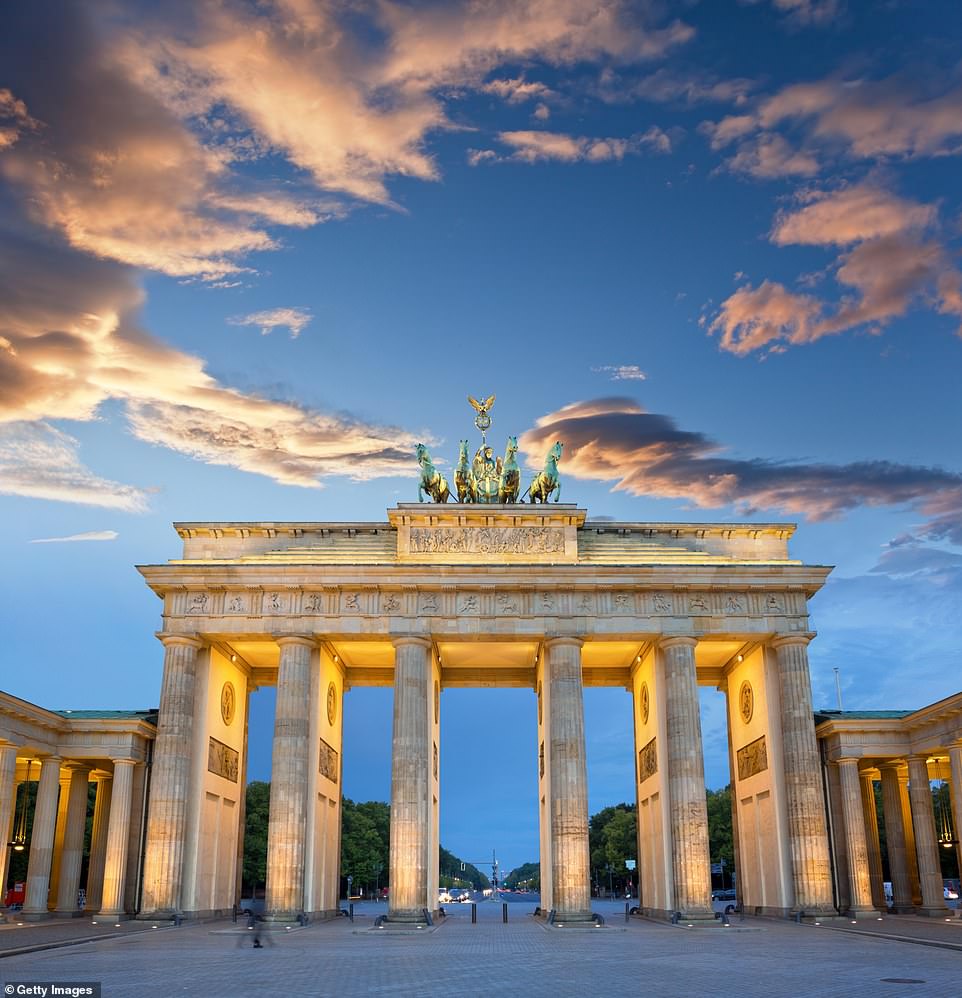 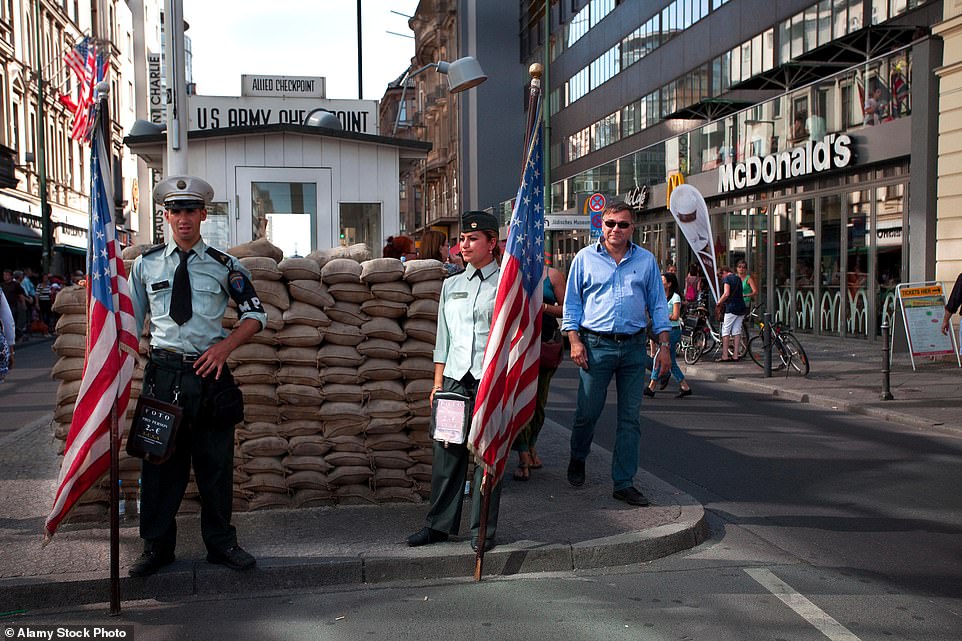 Checkpoint Charlie, pictured, is one of the ‘sights’ that people travel to Berlin to see 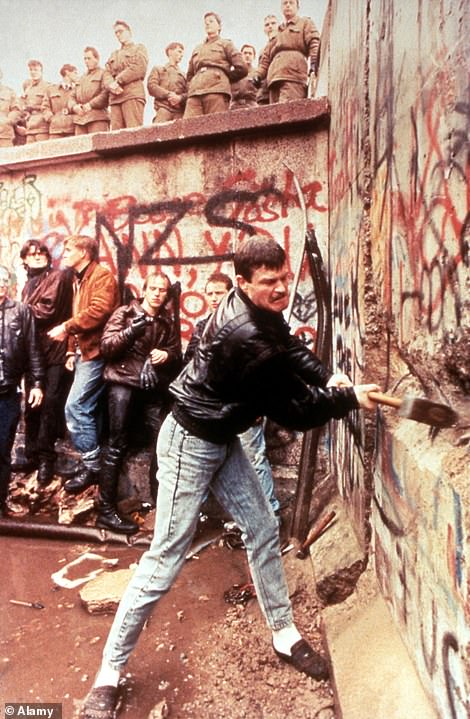 So it was a treat to revisit the Brandenburg Gate without the crowd of one million drunk Germans that the producer had somehow not imagined would be there. The famous Gate, the twin cathedrals of Gendarmenmarkt and the few remains of the notorious wall and Checkpoint Charlie are the ‘sights’ people come to see.

But it’s probably the museums which draw most of the tourists. External walls are pockmarked by bulletholes, made during intense fighting when the city was liberated by the Russian army in the spring of 1945.

Like the other great European collections, most of the exhibits in the world-famous Pergamon Museum were saved and preserved by pre-war western archaeologists, or what we are now supposed to call ‘Western imperialists’.

As the Pergamon concentrates on Mesopotamian culture, it is protected from the absurd ‘repatriation’ demands of countries like Greece with the Elgin Marbles.

If you care about Assyrian, Hittite, or even Hellenic relics, the last place you’d like to see them displayed is Baghdad or Damascus. Safe inside the purpose-built Pergamon Museum, the huge reconstruction, made from glazed blue-brick fragments of the Ishtar Gate to Babylon, takes your breath away.

Much of the rest of the Pergamon Museum is closed for renovation. Thank heavens for renovation is all I can say, since the presence of builders encouraged an Iranian-German artist, Yadegar Asisi, to build a spectacular three-dimensional model of the temple and surrounding area.

For me, his Pergamon Panorama was a highlight of my visit.

Before preciousness took over art criticism, panoramas, in which the spectator was put at the centre of a spectacle, were considered a respectable art form. 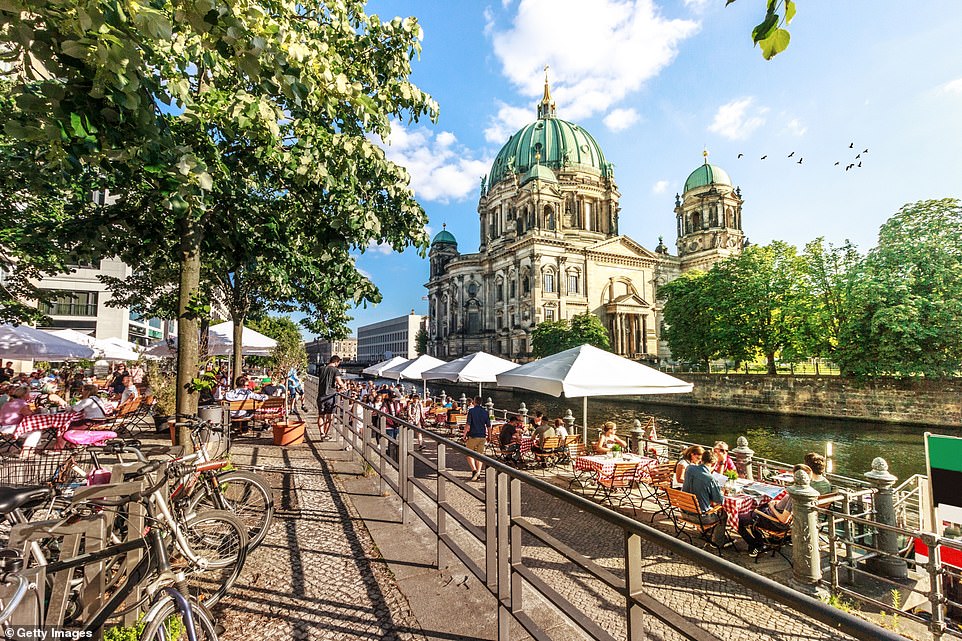 A view of Spree River and Berliner Dom in modern day Berlin. Jeremy says that compared to other European capitals like Paris or London, Berlin is reasonably priced

WHERE TO GO AFTER HOURS

The B-flat is the city’s foremost jazz club where some of the world’s great jazz names come to jam (b-flat-berlin.de). Visit to hear local talent such as Barnaby O’Rorke and Ben Mayson.

Clärchen’s Ballhaus is a classic dance hall in the old-fashioned sense — it is the last of the famous ‘Tanzcafes’ of the 1920s, where the working classes would let their hair down to the sound of popular hits of the day (ballhaus.de/en). Still serving traditional food, Clärchen’s now pulls in a younger crowd, too. The hottest ticket in town is Berghain (berghain.de), where techno music thrums inside a communist era power station and the rave up can last for three days.

The invention of cinema and television has since then condemned them to the world of ‘curiosity’, like displays of bearded ladies.

Asisi set out to reinvent them. He has yet to make panoramas as popular as they became at the turn of the 19th century, but the resources available to him — hugely improved lighting systems, 3-D photography and multi-track sound scores make for a sensational experience.

From the darkness of a central five-storey tower, the changing light of an ancient Turkish hilltop mesmerises you. 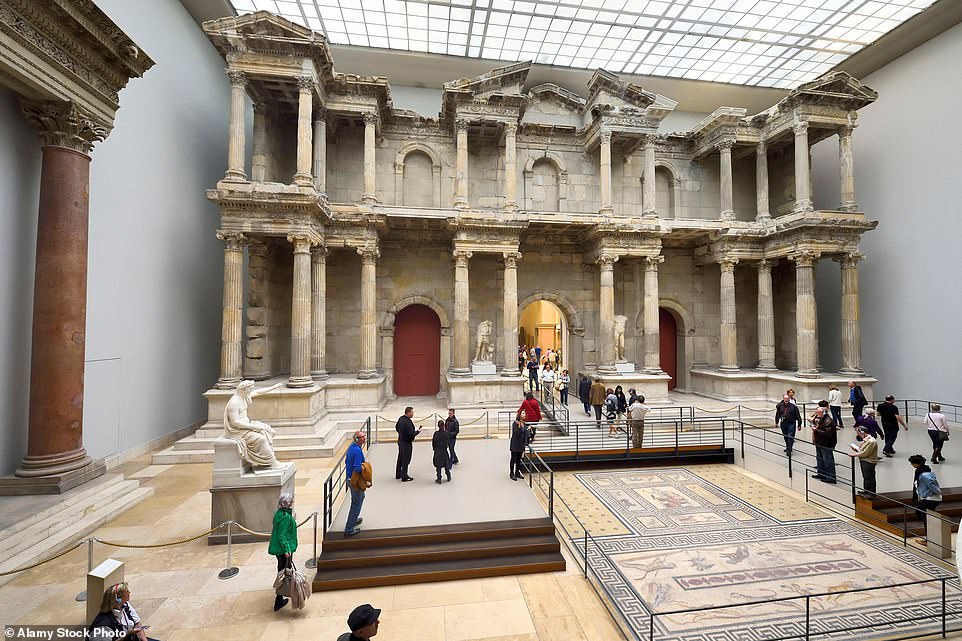 World renowned: The Pergamon Museum in Berlin, which concentrates on Mesopotamian culture

FOOD? STICK TO THE BEER

Berlin street food has acquired a huge following. Some serve chips topped with cheese, in case your cardiologist has been looking underworked recently. German food is not noted for its sophistication.

I hunted for a place serving Helmut Kohl’s favourite dish saumagen — pig’s stomach stuffed with potato, pork and spices, but without great enthusiasm. Sausages are a German religion, but sadly

I was defeated in attempts to discover a curry wurst — a Berlin speciality — which did not taste of cardboard sausage with powdered sauce tipped on top. Stick to the beer.

We stayed in a cobbled square in Kreuzberg, which in the Cold War was about as close as you could get to East Berlin without scaling the wall, and which attracted many Turkish immigrants after the war, perhaps thanks to its cheap prices.

Just like London’s Shoreditch, it is now fashionable, and the Hotel Orania.Berlin, a cool establishment in a solid, pre-war building, opened two years ago.

It looks out over a scrubby park. It is well-run, fun, with a young, helpful staff. Its chef has devised an unusual four-course menu consisting entirely of duck. It tastes much better than it sounds. No-one goes to Berlin to lose weight.

The cyclists of Berlin are a devil-may-care crowd who probably have the best means of transport.

Set on a plain, Berlin is great cycling territory and cycle-hire stations abound. Though to judge from the frequency of whiffs, the place does have some tricky drain problems. Against that, no other city I’ve visited has such delicious natural fragrance as that given off by the linden trees in bloom in June and July. Walk down almost any tree-lined street and the scent overwhelms you.

Compared to other European capitals like Paris or London, Berlin is reasonably priced.

Contrary to its history, it has a relaxed, easy-going feel and an efficient, manageable public transport (you can pick up passes which cover all the trains, buses and subways at the airport) and fabulous museums.

I loved it. And so will you. ‘On to Berlin’ indeed.

Jeremy Paxman stayed at the Orania.Berlin (orania.berlin) which has B&B doubles from £233. Fly Easyjet (easyjet.com) London to Berlin from £46 return. Visit Berlin can arrange a Berlin Wall tour with a guide (visitberlin.de/en).