Jermain Defoe is a married man, tying the know with his beauty therapist partner at the stunning venue of Cliveden House.

The ex England and Spurs player, 38, and partner, 39, married in a £200,000 ceremony at the Buckinghamshire National Trust beauty spot on Saturday.

Just married: Jermain Defoe is a married man, tying the know with his beauty therapist partner at the stunning venue of Cliveden House

The bride, a mum of one, looked incredible in a plunging white gown with lace sleeves, finished off with a long veil.

She carried a bouquet of pink roses while her new husband was dapper in a cream jacket and waistcoat and bowtie.

The 45 minute ceremony took place in a beautiful floral garden at the famous Cliveden estate, while at the reception a stunning light show took place in the skies above the grounds.

One insider told The Sun: ‘Donna looked beautiful. And Jermain looked like the cat that got the cream.

‘It was a happy day full of celebration and joy.’

It was at Cliveden House that former war minister Jack Profumo began his relationship with 19-year-old Christine Keeler in July 1961, which led to one of the greatest political scandals of the 20th century – the Profumo affair.

The potential property is set upon 376 acres of beautifully presented National Trust grounds and boasts a luxurious five-star Relais & Châteaux hotel and spa where weddings are held.

In terms of pricing, the house offers various packages, including the ‘Romantic Package’ which is suitable for 8-16 guests and costs £450 per adult.

Back in August, the then-Ranger’s striker got down on one knee and proposed to the Scottish beautician, at the £2,500-a-night Blythswood Square Hotel that was decked out with light up ‘Marry Me’ letters and rose petals.

A source told the Daily Record at the time: ‘Donna was so thrilled at the effort Jermain went to. It was so romantic.

‘Signing for Rangers has turned out to be the best decision he’s ever made.

‘He not only won the league title but found the woman of his dreams. They’re both beyond happy.’

The star’s tumultuous love life has been well documented over the years with a series of flings with glamour models and Reality TV stars, along with a broken engagement.

The footballer was reported to have broken off his engagement to retail manager Charlotte Mears in 2007 before starting a relationship with her friend, ex-Miss Great Britain Danielle Lloyd, but their relationship fizzled out after a couple of months. 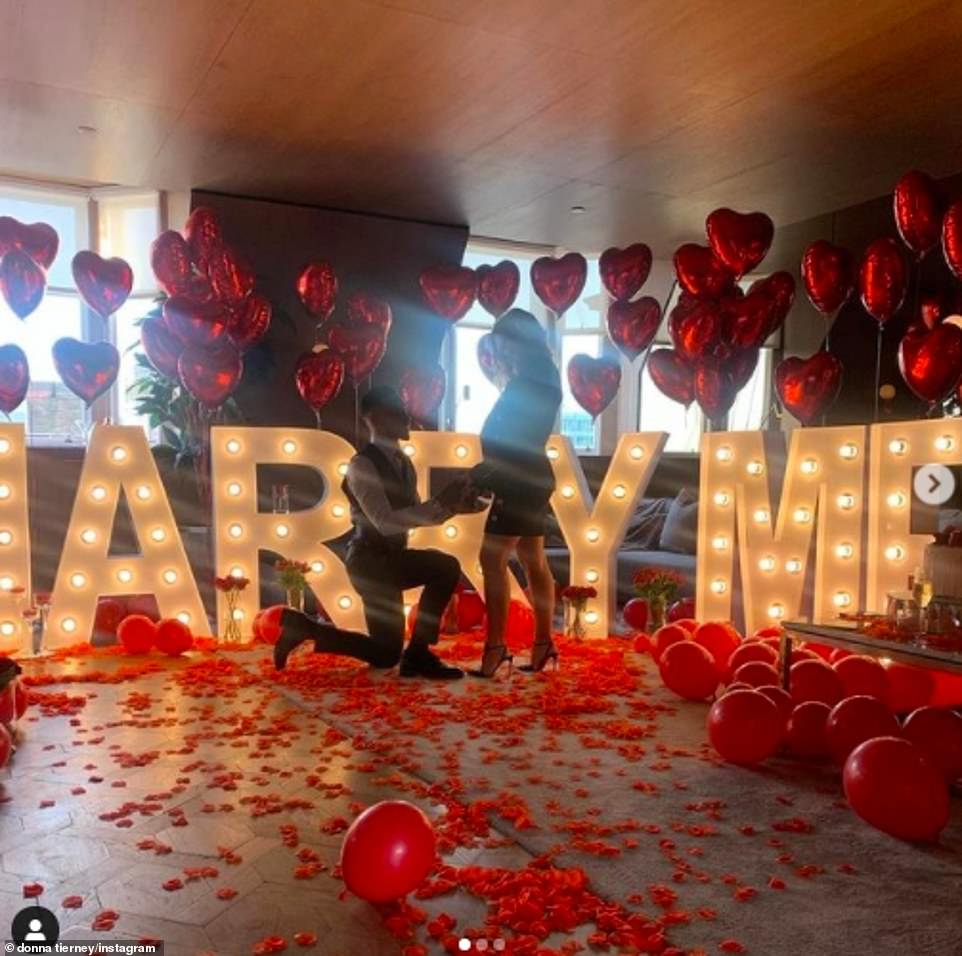 Cute: Jermain Defoe’s fiancée Donna Tierney shared more details and snaps from her romantic proposal to her Instagram on Friday

He was also spotted on dates with X Factor winner Alexandra Burke in 2012, before they split.

Jermain announced his retirement in March. He rounded off his playing days with a second stint at Sunderland after joining from Rangers in January, making seven appearances before making the decision to call time on his career. 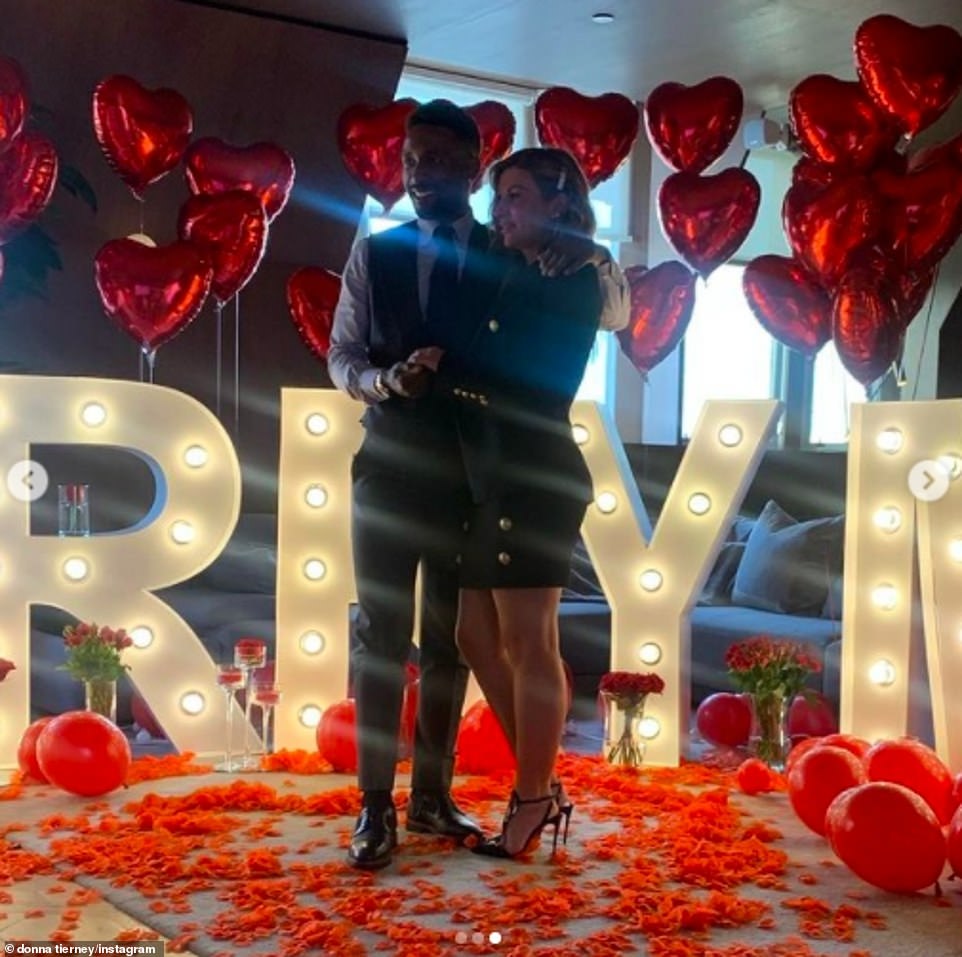 Love: The Ranger’s striker, 38, got down on one knee and proposed to the Scottish beautician, 39, at the the Blythswood Square Hotel that was decked out with light up ‘Marry Me’ letters and rose petals

Defoe wrote to his Twitter followers saying it was ‘the right time to bow out’ after ‘an incredible journey and said football would ‘always be in my blood’.

‘After 22 years in the game, I have decided to retire from professional football,’ he wrote to fans on Twitter. ‘It’s been a really tough decision, and one I have discussed with my family and those closest to me.

Defoe’s effort of 162 Premier League strikes means he is the ninth highest scorer in top-flight history, above Michael Owen and Spurs legend Teddy Sheringham – and only one off Liverpool icon Robbie Fowler. 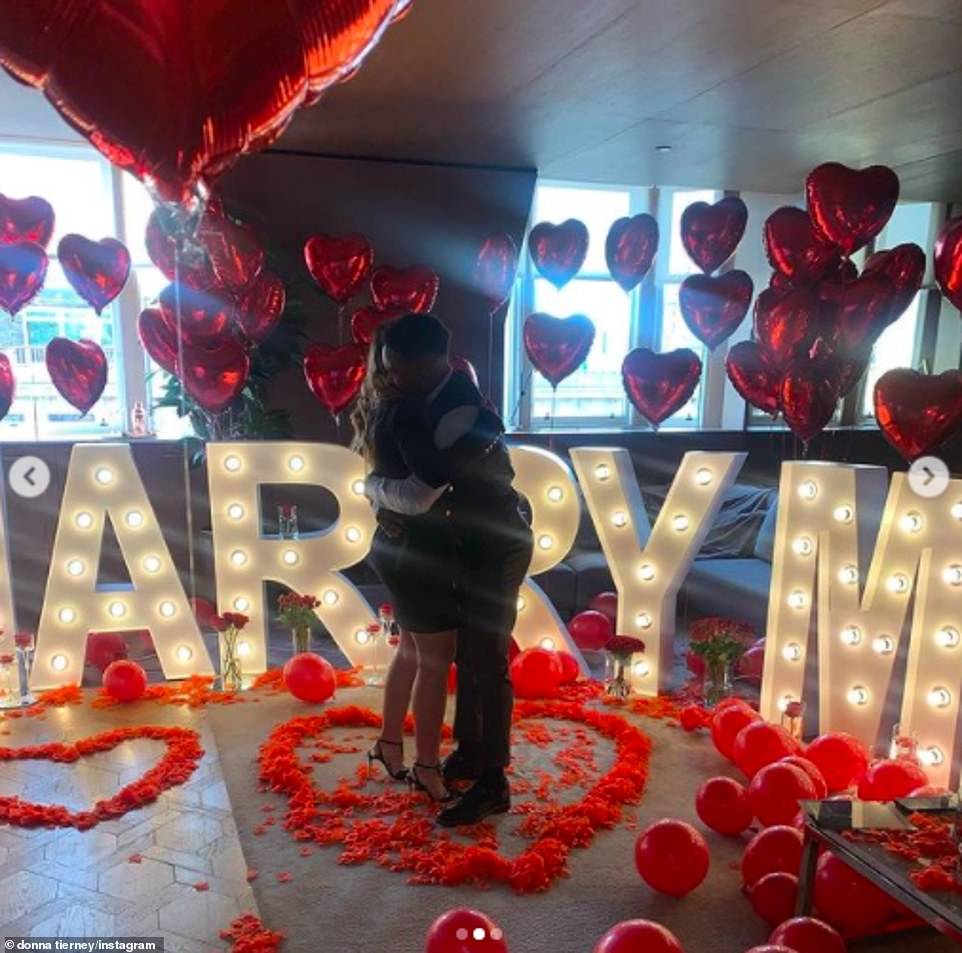 Sweet: Donna looked incredible in a black mini dress as suited and booted Jermaine got down on one knee before having a kiss and hug afterwards

Defoe had plenty of admirers on the pitch but also earned plaudits off of it too.

He was awarded an OBE for his services to football and his Jermain Defoe Foundation in the 2018 Birthday Honours.

And he warmed the hearts of the nation by striking up a relationship with terminally ill six-year-old Bradley Lowery, the young Sunderland fan who tragically died from cancer – with the striker regularly seen holding the youngster in his arms before and after matchdays.

Happy: She wrote in the caption: ‘Real Love, my one love, my soul mate, my forever ever ♥️ @iamjermaindefoe I love you… a lifetime of happiness together’