They announced their engagement just two weeks ago, after a six month romance.

And Love Island 2015 winner Jess Hayes, 25, celebrated the big news during a sunshine break in Cape Verde with her new fiancé Dan Lawry.

The couple appeared blissfully in love as they soaked up the sun on their break as they walked along the shoreline before Dan gave his love a piggyback into the water.

Jess looked incredible wearing a cut-out swimsuit which had a contrasting blue patterned section on the bottom half.

While tattooed hunk Dan wore a pair of white swimming trunks as he held hands with his love.

Jess paid tribute to her ‘best friend’ as she unveiled her dazzling diamond ring in an Instagram post on August 10. 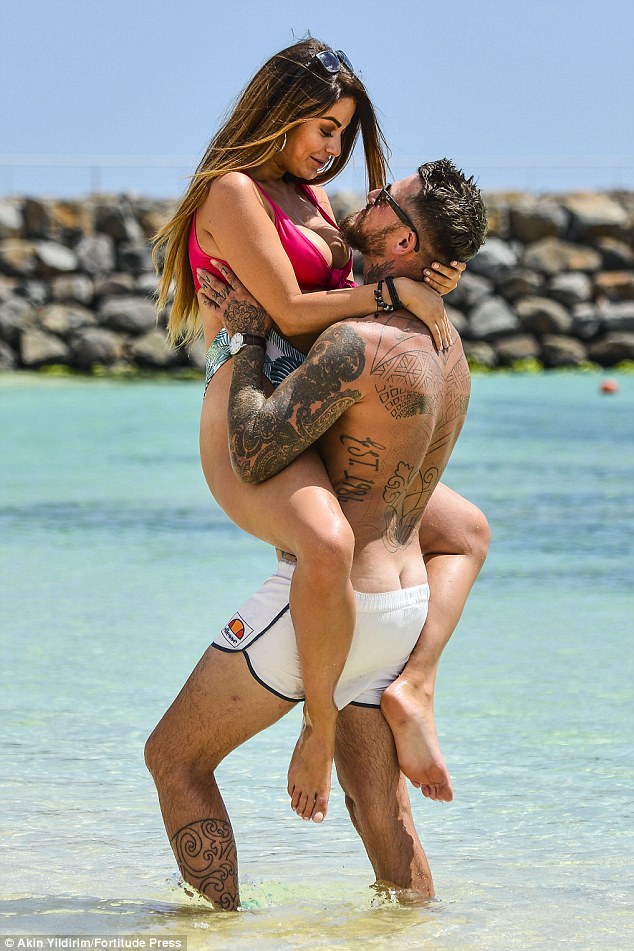 The post came just one day after the businessman made her the ‘happiest girl on earth’ by popping the question.

The glamour model wrote at the time: ‘He’s only gone and put a ring on it. What an emotional 24 hours I’m smiling so much my face actually hurts!

‘My best friend has made me his fiancé in the best way ever.’

‘After knowing each other a long time the fact we finally made our way back to each other, I know everything was meant to be and I’m the happiest girl on earth right now.’

‘I can’t stop looking and smiling it still doesn’t feel real ! I can’t wait to be Mrs Lawry Our story will always be my favourite love story.’

The couple have known each other for some time, but friendship is believed to have turned to romance around six months and they started dating back in February.

Jess told MailOnline in June: ‘I’ve known him a while but things have developed into romance.

The brunette bombshell was the first-ever winner of Love Island when it hit screens in 2015, taking the crown alongside her cricketer ex Max Morley, 25.

The couple parted ways just 40 days after the final aired.

Since then, Jess hasn’t minced her words about her ex, saying that she ‘would never go near him’ again because he’s ‘vile’.