Columnist defends $1m-a-year Reserve Bank boss arguing he deserves ‘bouquets’ for saving Australia from an inflation crisis – and many Aussies are furious: ‘He got it wrong, Jessica’

A prominent financial reporter has been torn to shreds by furious mortgage holders for defending Australia’s Reserve Bank boss Phillip Lowe despite years of bungled economic forecasts which have sent inflation soaring.

The central bank on Tuesday hiked the cash rate to 3.1 per cent, with the 0.25 rise making it the eighth consecutive monthly increase.

Pressure has been mounting on Dr Lowe and many have called for him to resign over his remarks last year suggesting interest rates would remain at 0.1 per cent until 2024.

But columnist Jessica Irvine has bizarrely leaped to the defence of Dr Lowe, who is paid $1million a year to steer the nation’s economy.

‘Our economy did not burn to the ground, thanks in large part due to the RBA’s extraordinary efforts,’ She wrote in the Sydney Morning Herald. ‘We approach Christmas with an economy in full employment for the first time in half a century.

‘Sure, paying a mortgage with interest rates 3 percentage points higher than you expected is tough. But it’s even tougher if you don’t have a job. And surely Lowe deserves a bouquet – or two – for that.’ 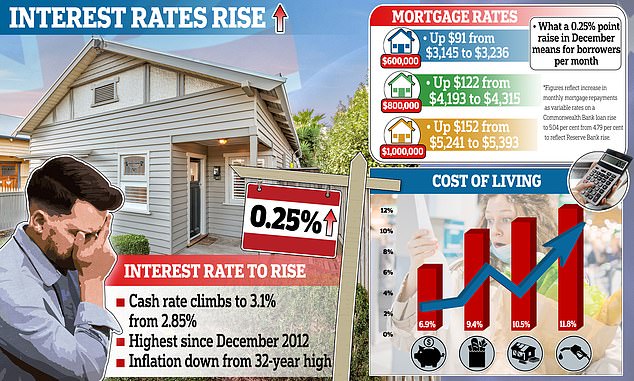 Her ‘puff piece’ comments sparked outrage with borrowers accusing her of tying to ‘defend the indefensible’.

Among the chorus of disapproval was was former Labor Senator Doug Cameron did not hold back.

‘The guy is in a very responsible position and got it horribly wrong. A lot of people were adversely affected. It needs to be called out and there should be consequences. Lowe should just resign.’

‘He got it wrong & affected many lives, Jessica,’ Ms Kernot wrote.

‘Not above criticism. And we don’t thank doctors like Coatesworth who got it wrong as well.’ 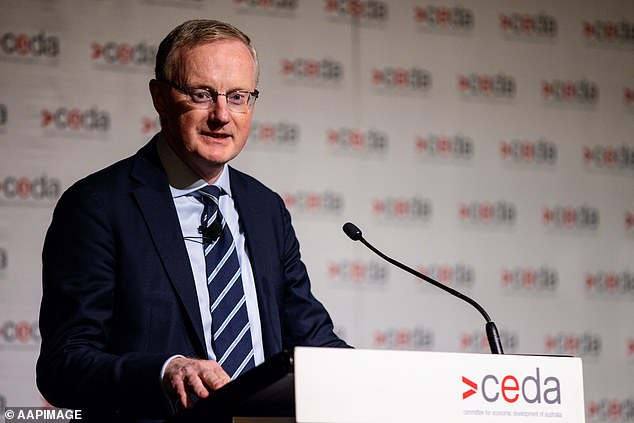 In February 2021, Dr Lowe made the claim that that interest rates wouldn’t rise until several years – despite economists in Australia and across the globe tipping inflation was set to surge on the heels of the pandemic following an outpouring of government subsidies to cushion the financial affects of Covid shutdowns.

‘The Board will not increase the cash rate until actual inflation is sustainably within the 2 to 3 per cent target range,’ he said.

‘The Board does not expect these conditions to be met until 2024 at the earliest.’

His remarks have not aged well given inflation is now at 6.9 cent and tipped to climb beyond 8.0 per cent in the year.

‘We pay Lowe over $1 million/year to get it right!’ one angry Twitter user pointed out.

Another wrote: ‘People invested their life savings in properties based on his predictions..  they bought properties above their comfort zones but now they’re out of their depth! They may never be able to retire comfortably…’

Saturday Paper journalist Rick Morton joked: ‘It takes some effort, at least, to make absolutely everybody unhappy from all corners of the public debate. RBA Governor Philip Lowe has done just that.

Dr Lowe was forced to apologise in November to those who borrowed heavily following his economic forecasts.

‘At the time, we thought it was the right thing to do. And I think looking back would have chosen different language,’ he said.

‘People did not hear the caveats in what we said. We didn’t get across the caveats clearly enough, and the community heard 2024. They didn’t hear the conditionality.

‘That’s a failure on our part, we didn’t communicate the caveats clearly enough, and we’ve certainly learned from that.’

What a 0.25 percentage point rate rise will mean for borrowers