Jessica Chastain has landed the January/February 2021 cover of Shape Magazine.

The 43-year-old redheaded bombshell spoke to the women’s health magazine about her approach to fitness and food, and paving the way for women in Hollywood by fighting for fair pay.

Posing in vibrant neon colors, the Zero Dark Thirty actress opened up about her mission to use her platform for good as she said, ‘For me, it’s about the action of doing.’

Cover girl: Jessica Chastain, 43, stuns in vibrant neon colors for Shape Magazine’s January/February 2021 cover as she speaks about using her platform for good and fighting for fair pay for women

An industry vet who boasts two Academy Award nominations, Chastain reveals she is more than a pretty face as she talks about putting in the work to make a change in Hollywood.

‘You can talk about something; you can wish it to happen. But at a certain point, what can you do that actually shifts the conversation?,’ she purports.

‘I want to use whatever platform I’m given to amplify someone who doesn’t have a platform. I’ve always felt it was irresponsible to allow another person to be ignored, bullied, or unheard. I don’t want to live in a world where something like that is okay.’

Founding her own production company, Freckle Films, she has made it her mission to make movies that champion feminine strength both on and off camera. 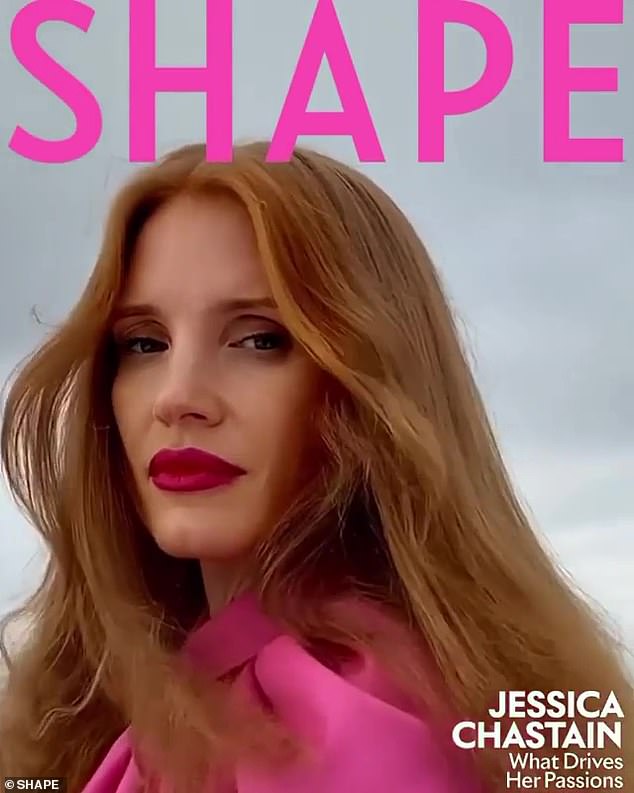 Feminine strength: Her production company Freckle Films seeks to make movies that champion feminine strength both on and off camera as she aims to ‘put images out there that challenge a preconceived notion or system or a stereotype of what a woman is’

‘I’m trying to put images out there that challenge a preconceived notion or system or a stereotype of what a woman is.’

‘Boys and men should be comfortable seeing women in these roles. Otherwise, we’re denying them the realization that the feminine is powerful and strong,’ she added.

Speaking about her 2022 film, The 355 – which she also produced – she spoke about her forward-thinking business approach when it came to ensuring the women in the project got the fair pay they deserve.

‘A lot of times, our names are used to sell movies, and that’s how the money is raised for them. So I thought, if our names are being sold, then we need to be the owners of the film.’

Starring alongside Lupita Nyong’o, Penelope Cruz, Diane Kruger and Fan Bingbing in the movie about female spies, Chastain opted for a fiercely unconventional approach to the film as she made all her co-stars partial owners of the film’s rights. 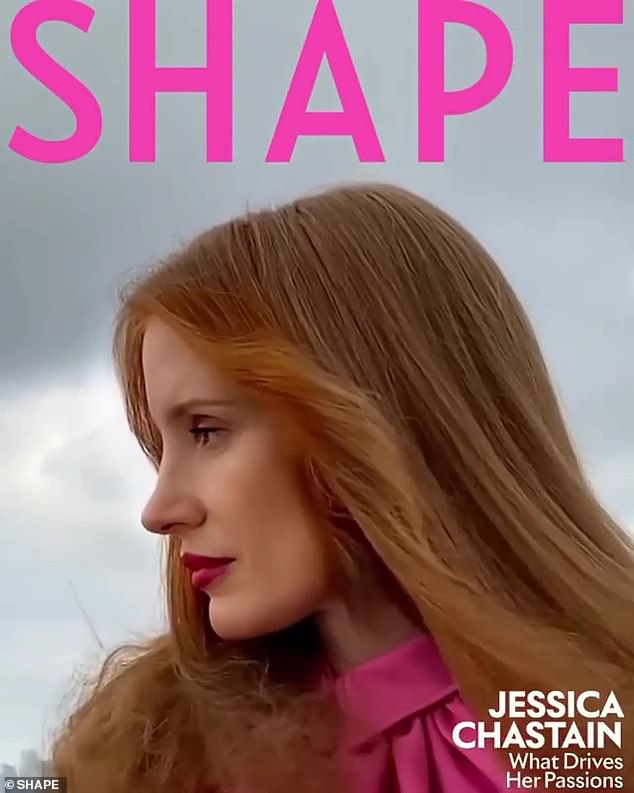 A new approach: Her 2022 film The 355 successfully made all the starring actresses partial owners of the film to ensure equal pay, as she said ‘Hopefully it creates a new model in which artists can own their work’

Pitching the concept to her co-stars she told them: ‘We’re going to sell the distribution rights to raise the budget for the film, and then everyone owns a portion of the box office,’ adding that the right’s sold very quickly.

Realizing the magnitude of what she pulled off as a way to ensure fair pay for all the actresses involved she said:

‘I don’t know if anything like this has been done before, and honestly, I’m a bit shocked I got away with it…but hopefully it creates a new model in which artists can own their work.’

Her championing of women stems in large from the strong ladies in her life as she spoke about the blessing of being in lockdown alongside her mother and grandmother.

Speaking about her quarantine fitness regimen, the Interstellar actress said that even her 80-year-old grandma, Marilyn Herst, got in on the fun. 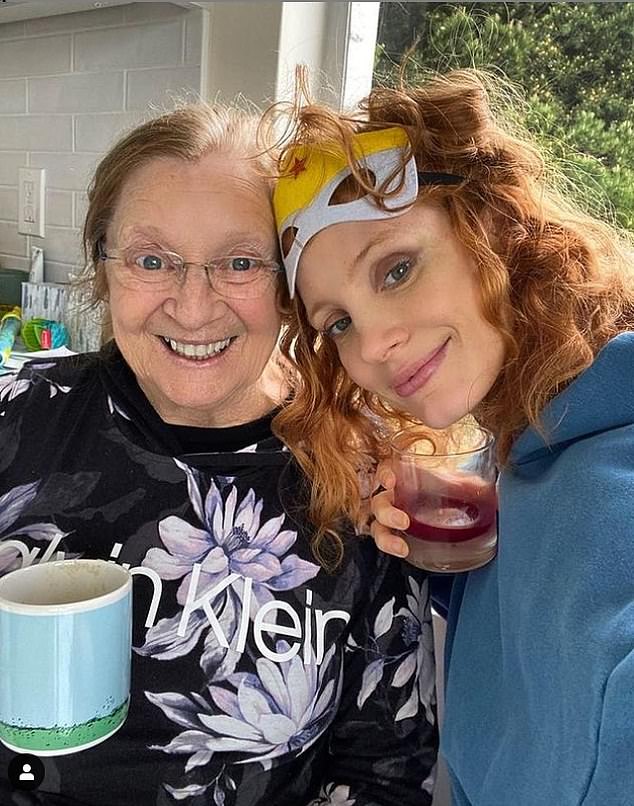 Grandma’s girl: The Interstellar actress said that quarantining with her grandma was a blessing and the pair took to working out together every morning despite her being in her eighties

‘I did Isaac Boots’ Torch’d workouts with my grandmother, who is in her 80s. It was such a breath of sanity during that time to do it every morning with my grandma. And she really helped me be accountable.’

Though she said at times getting herself to workout was hard, the ‘confidence’ she felt afterwards kept her going.

‘It’s the sense of being proud of myself…once I finish, I immediately feel like a superhero.’

A trained chef, Chastain has been vegan for 14 years after she found her body was ‘wrecked’ from quickly gaining and losing weight for various film roles, prompting her friend to suggest a two week raw detox diet.

‘The first week, I was so miserable. But by the second week, I had so much energy. When the two weeks were over, I was like, “I’m done!” I went to a restaurant and ordered risotto and fish. And that night, I felt sick again. I decided that my body was clearly telling me the way it wanted me to eat.’

A fierce go-getter when it comes to listening to her body and ensuring the projects she signs on to are ‘socially responsible’ she chalks it all up to ‘the action of doing.’ 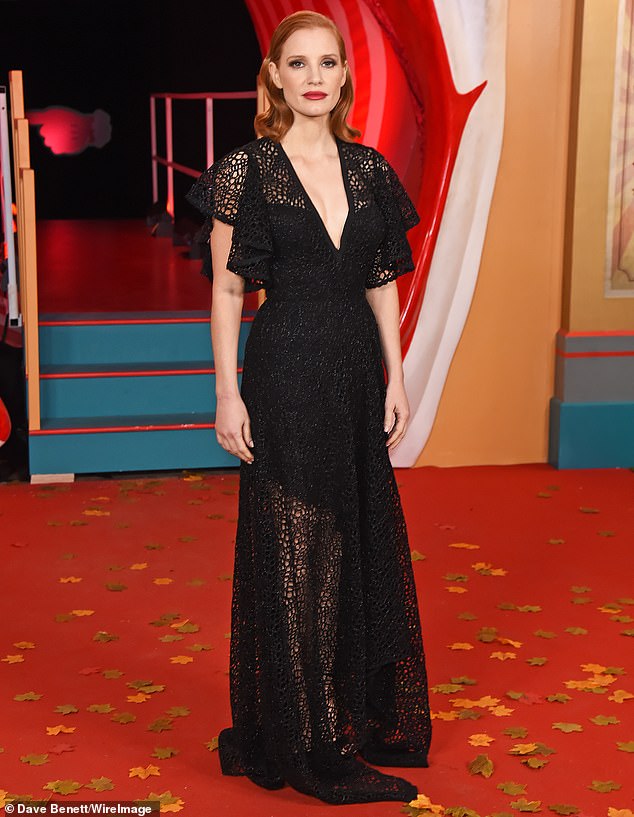 Taking action: A fierce go-getter when it comes to listening to her body and ensuring the projects she signs on to are socially responsible she chalks it up to ‘the action of doing’; pictured 2019