Jesy Nelson’s long-awaited debut solo single finally dropped on Friday morning alongside an action-packed music video that saw the singer showcase her dance moves and collaborate with two of the industry’s biggest rappers.

The X Factor winner sampled Diddy’s hit anthem Bad Boy 4 Life and remade the iconic music video, with the rapper making a cameo appearance and joking about her departure from Little Mix.

Another music heavyweight making an appearance was Nicki Minaj – who  previously collaborated with Little Mix on the 2018 song Woman Like Me.

One to watch: Jesy Nelson FINALLY dropped her debut solo single Boyz as she posed in a bikini, grinded on Nicki Minaj and joked about her Little Mix exit with Diddy in new video on Friday

In Jesy’s music video – which was a direct copy of Diddy’s 2001 video – she spoofed the moment Diddy is confronted by Ben Stiller – who jokes about the rapper’s many monikers – Puff Daddy, P Diddy and Sean Combs.

For Jesy’s version, Diddy called the singer ‘Jeezy, Jesy, Little Mix, whatever y’all calling yourself these days’, poking fun at her controversial departure from Little Mix in December.

Elsewhere in the video, Jesy stripped down to a bikini and snacked on sushi before slipping into a tiny tennis skirt and chunky platform heels. 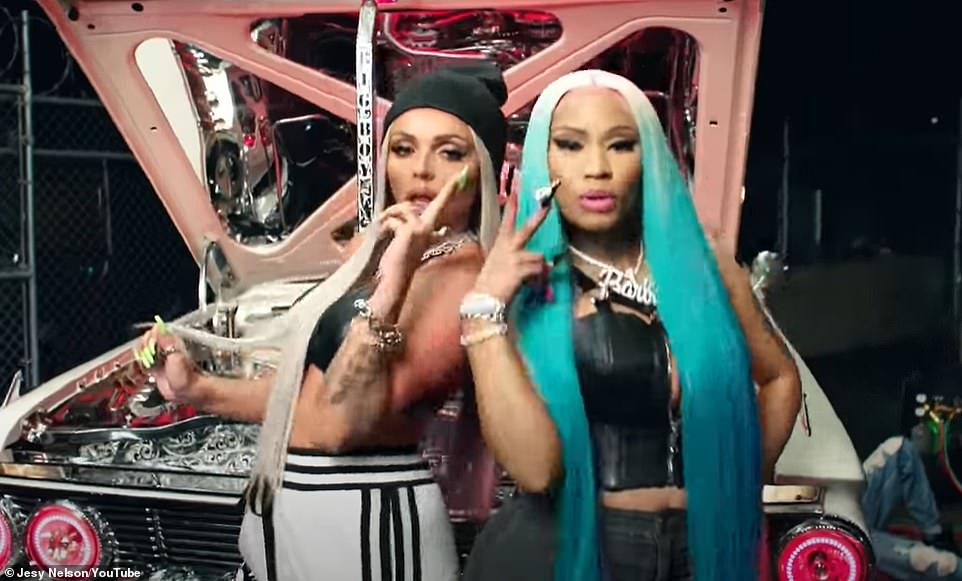 Double trouble: Another music heavyweight making an appearance was Nicki Minaj – who previously collaborated with Little Mix on the 2018 song Woman Like Me

Jesy previously described the song as an ‘in your face’ club anthem that could divide fans’ opinion.

‘You’re either going to love it or you’re going to hate it and I would rather that than people be like, ‘Meh, okay…”, she told Noctis XXI Magazine.

Yet it proved to be an overwhelming hit online, with fans taking to Twitter after the song dropped to pen: ‘and after all, Jesy was feeling so good and so happy. So proud of her. This is the best debut i ever seen’; 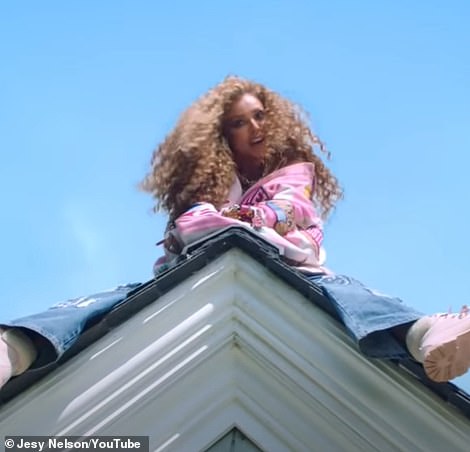 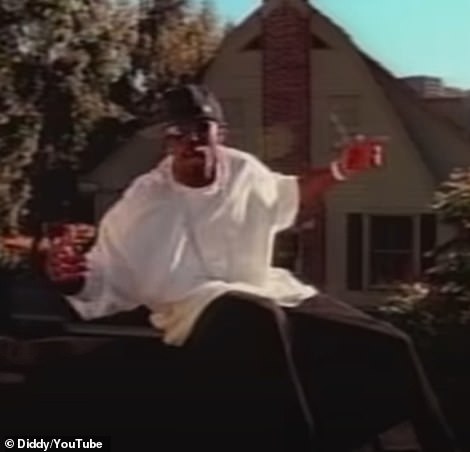 ‘Jesy Nelson killing the BOYZ with so many outfits. Plus her vocals and adlibs and Nicki Minaj’s Rap part made the whole MV a masterpiece!’;

‘I was ready not to like it, but Boyz is undeniably good. I wish there was less drama involved, but Jesy did well. This chorus will be stuck in my head for the foreseeable time. Also – SparklesbudgetSparkles honey!’;

‘#Boyz is a hit. Say what you want but they used the Diddy sample perfectly. There’s a reason he showed up for the video. Congrats Nicki and Jesy for the banger.’

‘Jesy and Nicki ate and left no crumbs! Nicki looks good asf and the music video was a cute. IT’S A HIT!! #Boyz’; 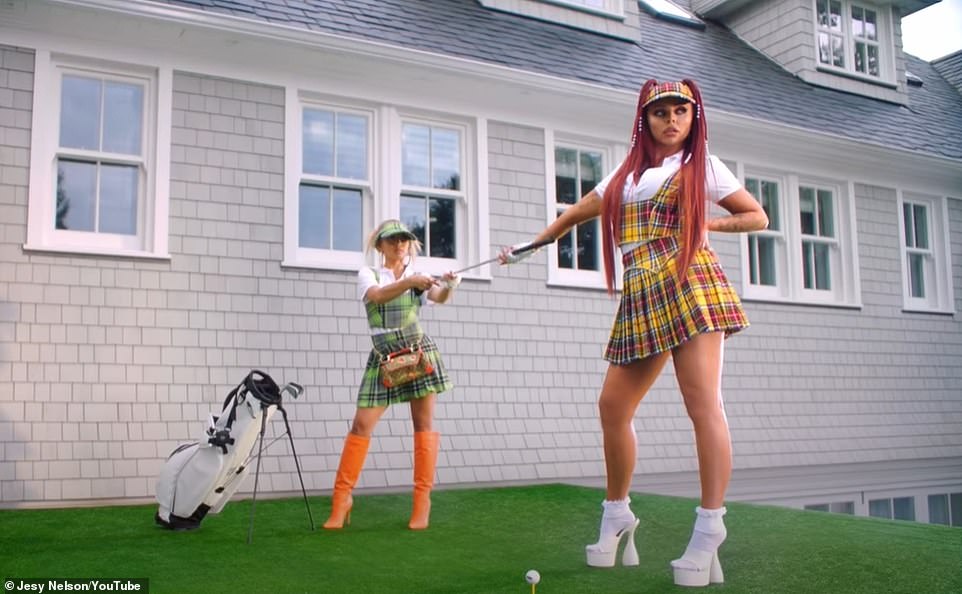 Striking: Elsewhere in the video, Jesy stripped down to a bikini and snacked on sushi before slipping into a tiny tennis skirt and chunky platform heels

‘Thank you to @NICKIMINAJ and Jesy for giving us what we needed and for showing everyone how to a song is supposed to be ate up…my stomach is full and I’m grateful for the feed we got #Boyz #BOYZ’;

It comes after the singer, 30, who officially quit Little Mix in December, revealed that she hasn’t spoken to her former bandmates in a year.

The vocalist commanded the charts with Leigh-Anne Pinnock, Jade Thirlwall and Perrie Edwards for nine years after finding fame on X Factor in 2011, however Jesy left the group amid growing strain on her mental health.

Speaking to Glamour Magazine, the star, who is set to release her debut solo single Boyz on Friday, revealed that there is a ‘distance’ between herself and the trio which she confessed is ‘weird’ given their proximity for nearly a decade.

She said: ‘I haven’t spoken to the girls. It is weird because for so many years we were as close as sisters, together every hour of the day for weeks, sharing beds, laughing, crying just 24/7 the four of us together and then… Nothing.’

Jesy announced her departure from the group one year after filming a BBC documentary Jesy Nelson: Odd One Out, in which she revealed she had attempted to take her own life after years of relentless trolling and abuse.

In August, Leigh-Anne welcomed twins with her footballer boyfriend Andre Gray while five days later, Perrie introduced her baby son Axel to the road with her partner, footballer Alex Oxlade-Chamberlain. 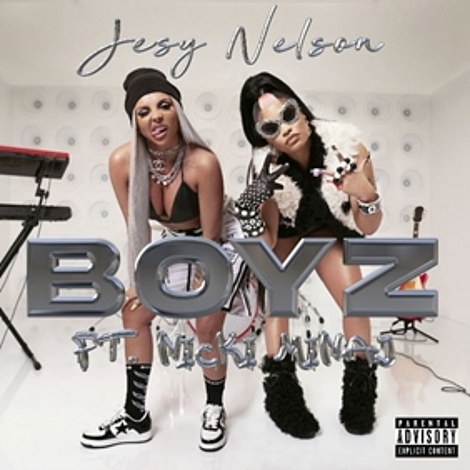 Out now: Jesy has finally released her debut solo single

When asked if she had seen the tots, she said: ‘No. I’ve sent a few texts, but that’s it. I can’t explain it, it’s like there has to be this distance…

‘We were so close so you can’t do in-between, there has to be space and hopefully… Hopefully at some point in the future we can all come back together. I love them. They are my sisters in so many ways, but for the time being we just don’t talk.’

Jesy explained that the pressure of being compared to ‘these three naturally gorgeous, super teeny-tiny girls’ was crippling.

On dealing with being around the other girls, Jesy recently told Fearne Cotton’s podcast on her Happy Place podcast: ‘To be compared every single day to three other girls was draining, and I couldn’t deal with that anymore…

‘And I think a lot of people have misconstrued what I meant in my statement, they’re like oh, so now she’s going solo. I never said in my statement, I’m coming out of the music industry, I’m not going to do music anymore…

‘I said, I’m just going to start a new chapter of my life, I just want to make myself happy. I don’t know what that’s going to be, but I need to look after myself now, make myself feel better again.’ 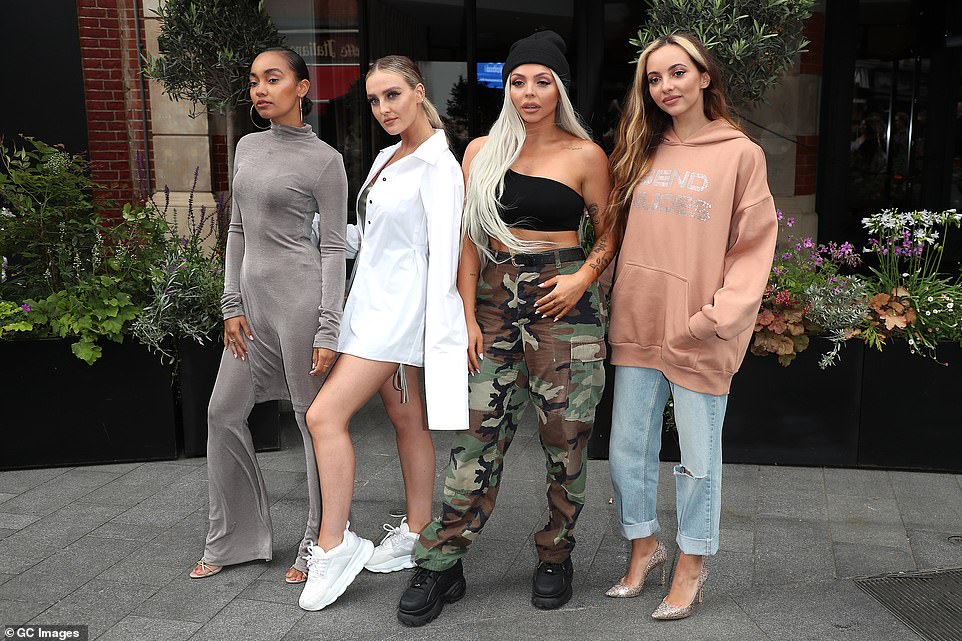 Way back when: It comes after the singer, 30, who officially quit Little Mix in December, revealed that she hasn’t spoken to her former bandmates in a year (pictured with Leigh-Anne Pinnock, Perrie Edwards and Jade Thirlwall in 2019)