Mike White was more than just all right for the New York Jets, and he may have permanently supplanted the benched Zach Wilson on the team’s depth chart.

The second-year quarterback was absolutely terrific in Sunday’s 31-10 win over the visiting Chicago Bears, delivering a performance that had the rain-drenched but fired-up fans at MetLife Stadium chanting his name. White threw three touchdown passes, including two to Garrett Wilson, in his first start since last season.

‘It’s awesome,’ White said. ‘I mean, just going out there playing football with your friends and guys you’ve been with for a couple years now.’

White sparked the Jets (7-4) to a season-high 466 yards in the rain, going 22 of 28 for 315 yards while running the offense efficiently and effectively.

White became the fifth player in NFL history to have multiple games with 300 yards passing and three TD passes in his first four career starts. He joined Patrick Mahomes, Austin Davis, Kurt Warner and Mark Rypien to accomplish the feat.

‘He didn’t need to be anybody but Mike White,’ coach Robert Saleh said. ‘He didn’t need to turn it into ‘The Greatest Show on Turf. … He made the easy look easy, and I thought he did a really good job with that.’

Mike White was absolutely terrific in Sunday’s 31-10 win over the visiting Chicago Bears, delivering a performance that had the rain-drenched but fired-up fans at MetLife Stadium chanting his name. White threw three touchdown passes, including two to Garrett Wilson, in his first start since last season 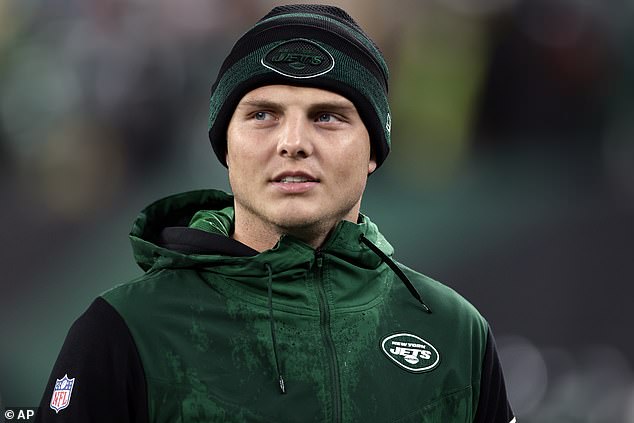 The win ends a brutal week for Zach Wilson (pictured), who was benched and later found himself at the center of controversy over his post-game comments from the Jets’ Week 12 loss

Elijah Moore, who requested a trade earlier this season because of a lack of opportunities, caught his first touchdown pass of the season. Ty Johnson had a 32-yard TD run for the Jets, who bounced back from a 10-3 loss at New England.

The win ends a brutal week for Zach, who was benched and later found himself at the center of controversy over his post-game comments from the Jets’ Week 12 loss in New England.

‘I had a sick feeling in my stomach,’ Zach told reporters Wednesday.

The second-year quarterback was undeniably bad at blustery Gillette Stadium in Foxborough on Sunday, completing only 9 of 22 passes for 77 yards. But as bad as he played, he only exacerbated things in the postgame press conference.

‘No,’ Zach told reporters on November 20 when asked if he let down a Jets defense that held the Patriots offense to three points. (New England won the game, 10-3, on a punt return for a touchdown by Marcus Jones at the end of regulation)

Zach immediately regretted his answer when confronted by his father via text message.

‘Bro, what are you doing?’ Mike Wilson asked, as reported by the New York Post.

‘I didn’t realize what I said,’ Wilson said Wednesday after being demoted to third-string in favor of Mike White. ‘I let my emotions get the best of me and it took until a little bit after when we were getting ready to leave and my pops gave me a call. It was before I even stepped on the bus. He shot me a text and said, ‘What did you say?’

‘I was like, ‘I’m not sure,’ Wilson said. ‘He sent [the TV clip] to me and instantly right there I knew I let my emotions get the best of me.’ 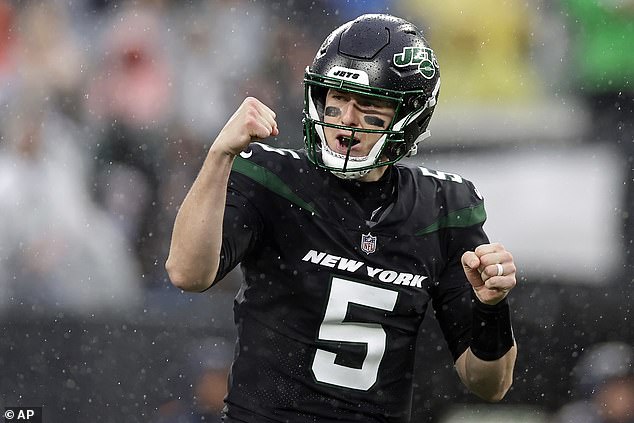 The answer sparked a wave of criticism against the 23-year-old, including reports that Jets defenders were unhappy. Perhaps more damning was a critical tweet from Cowboys defensive back Jourdan Lewis: ‘You don’t owe your defense.’

The tweet was ‘liked’ by Jets rookie cornerback, Sauce Gardner, who admitted Wednesday that he did not intend to respond to the post: ‘I didn’t mean to do that… I’ll just be scrolling and my finger hits the button.’

Regardless, Wilson has since apologized for the comment to his teammates.

‘I just wanted to talk to the guys,’ Wilson said. ‘It was the only thing I could think of the last couple of days — I wanted the opportunity to talk to those guys and really make it from the heart.’

As for the Bears (3-9), Trevor Siemian started at quarterback for an injured Justin Fields and couldn’t do much after their first two series.

‘Today was a complete team win,’ White said. ‘Our defense did what they always do and they dominated.’ 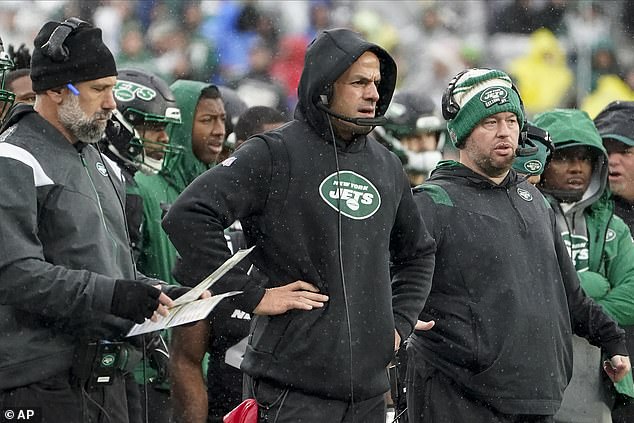 New York Jets head coach Robert Saleh, second from left, watches from the sideline against the Chicago Bears during the first quarter

White already made it into the Pro Football Hall of Fame last year when his jersey and game ball were displayed after his 37 completions in his debut were the most in NFL history in a player’s first start.

A fan favorite since that performance, White had to quiet the crowd that chanted, ‘Mike White!’ at times late in the game while the offense was on the field.

‘Nah, I’m not going to complain too much about that,’ he said with a smile.

Added Garrett Wilson: ‘He got what he deserved. … He deserved every bit of that.’

The only real intrigue for the Bears, who have lost five straight, was who would start at quarterback.

Fields was ruled out 90 minutes before kickoff with an injured left shoulder. Trevor Siemian was slated to start in his place, but injured his oblique during warmups — and Chicago announced Nathan Peterman, elevated from the practice squad Saturday, would start instead.

But both Siemian and Peterman threw on the sideline, and the Bears opted to go with Siemian after all. Siemian, who said the injury bothered him a bit, was 14 of 25 for 179 yards with a touchdown and an interception.

‘Honestly, I’m more embarrassed to get an injury,’ Siemian said. ‘You’ve got guys in there in Week 12 or 13 going through hell. And I had a non-contact thing show up.’

White marched the Jets downfield and capped the opening drive with an 8-yard touchdown pass to Garrett Wilson to give New York an early 7-0 lead. It was the Jets’ first touchdown this season on an opening drive. 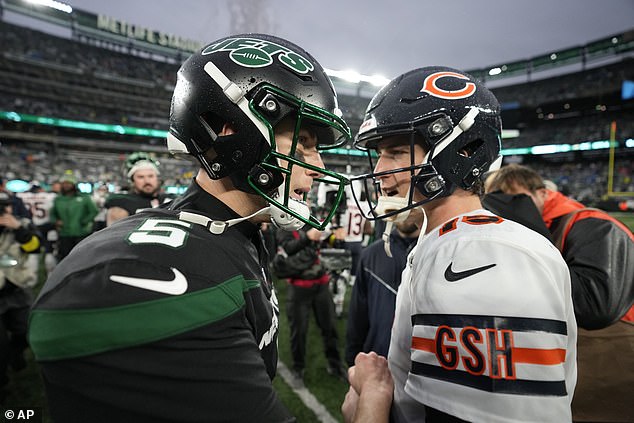 But that was it for Chicago on offense.

After holder Braden Mann fumbled the snap on Greg Zuerlein’s potential tying 36-yard field goal, White and the offense got back into the end zone when Wilson spun and juked Kindle Vildor before racing for a 54-yard touchdown that put New York up 14-10.

With 12 seconds left before halftime and Mann wearing gloves this time, Zuerlein booted a 57-yarder through the rain — the longest field goal at home in franchise history, tying the overall mark for any game he already shared with Chandler Catanzaro.

C.J. Mosley’s interception of Siemian with 5:04 left sealed it for the Jets, who snapped a five-game skid against the Bears.