Passengers were forced to sleep in an airport after their Jetstar flight was turned around due to a curfew.

Peter Eckert was flying from Melbourne to Adelaide on Wednesday after going to the Australian Open.

However a combination of dust, gusty winds and heavy rain in Victoria meant flight JQ 776 had been delayed by an hour at Tullamarine airport.

Mr Eckert said flights out of the airport had been scheduled to land at Adelaide at 10.10pm.

However the flight was delayed by an hour and was met with turbulence once it was in the air.

‘We left an hour late with what we believe was clearance to land in Adelaide,’ Mr Eckert told Daily Mail Australia.

‘Like you see on the flight radar the pilot announced landing to the staff then the announcement after that we couldn’t land and we were going back to Melbourne.’

Mr Eckert said on the return flight back to Melbourne the seat belt sign was on the majority of the time and staff remained seated.

The flight arrived back to Melbourne with rainy weather at 12.30am with a rush to figure out accommodation.

Mr Eckert said 20 people stayed at the airport overnight and, despite long delays, people were in ‘pretty good’ spirits.

One man said he missed a job interview as a result of the delay.

Others went to stay with friends or family until the rescheduled flight at 10am, which was delayed until 10.30am.

‘The lady behind me on the cancelled flight had an elderly father coming to pick her up,’ Mr Eckert said.

‘And not arriving said how her mother would panic and think that the plane had crashed.’ 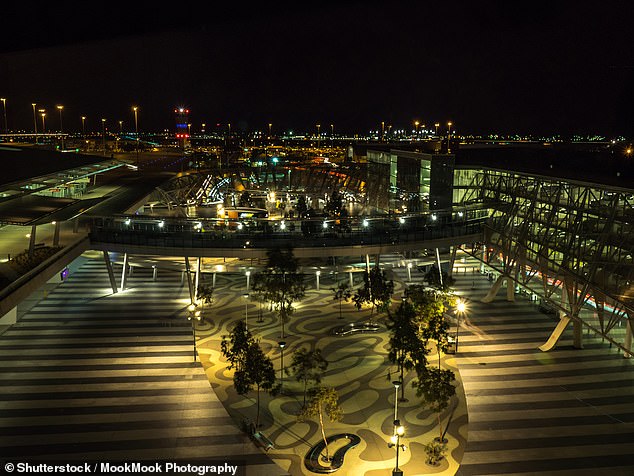 One man said he missed a job interview as a result of the the delay (pictured: Adelaide airport)

Mr Eckert said he slept on a stainless steal bench at the airport while his friends waited to catch the first flight back.

‘Because I slept, I checked but the red eye was full, back to the original allocated flight. Same seats, same flight number, same people, everyone with a story to tell,’ he said.

A Jetstar spokesman told Daily Mail Australia: ‘Due to weather affecting aircraft departures from Melbourne last night, we were given approval to land in Adelaide after curfew. Unfortunately this approval was revoked on approach to Adelaide and the flight returned to Melbourne.

‘We appreciate delays are frustrating for customers and apologise for the inconvenience caused.

‘Affected customers were offered the option of a refund or if they wanted to continue to travel on the alternative flight arranged, they were offered accommodation, meal allowances and transport to and from hotels.’