With so many unusual noises and age-old myths, travellers often walk off a plane with more questions than when they boarded.

Can turbulence make a plane fall out of the sky? What happens if a passenger dies on board? Does human waste really get dumped in the air? Do I really have to switch my phone to flight mode? And where exactly is the safest seat?

Pilot Brett Manders, from Australian airline Jetstar, has debunked some of the more common airline myths to help you relax a bit more on your next flight on Seven’s Sunrise breakfast program.

With so many unusual noises and old-aged myths, travellers often walk off a plane with more questions than when they boarded (stock image)

Do planes dump human waste in the air?

Mr Manders explained the waste from planes is held in a tank until the aircraft lands.

‘I can safely say there’s no number ones or twos that goes out into the atmosphere. All the waste goes into a tank, and is held at the bottom of the rear of the aircraft. It doesn’t go overboard,’ he said.

Why are passengers advised to know the ‘brace position’?

Before take off, passengers are always taught the ‘brace position’ – but most of the time are not told exactly why they might have to perform it.

Mr Manders said in an unlikely event of an air accident, taking a brace position can protect passengers from any flying debris inside the cabin during an emergency landing on land or water.

‘It’s been designed by ergonomic engineers to make sure that in an event there’s a non-normal landing, you are protected,’ he explained.

What is the safest seat on the plane?

‘There’s no individual seat that’s safer than any other,’ Mr Manders said.

Can you open the door mid-air?

Just like the Hollywood movies, many travellers have fears of being sucked out of the plane if the doors open mid-flight.

Thankfully, this is impossible.

‘The doors to the front of the areoplane open ‘in’ initially and then ‘out’. The pressurisation in an aeroplane adds hundreds of kilos of pressure each square metre of the door, so humans are not strong enough to open the doors.’ 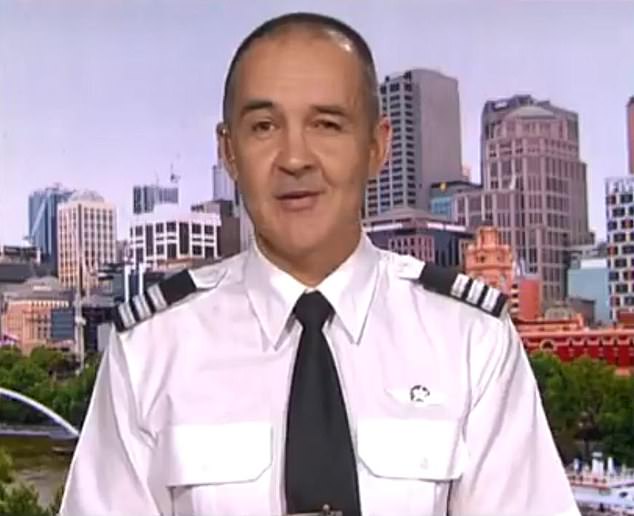 What happens when someone dies on board?

Mr Manders said during his 10-years experience as a commercial pilot, he has only experienced one death on board.

‘The cabin crew are trained to use all discretion possible. They would screen the deceased person from the other passengers,’ he explained.

Flight attendants also offer comfort and support to the family travelling with them.

Should we worry about turbulence?

One of the biggest fears of many passengers is experiencing turbulence 35,000ft – but Mr Manders said there’s nothing to be worried about.

He explained that turbulence is caused when different masses of air collide at different speeds.

‘If you just relate turbulence to bumpy air, all it is is air with different temperatures, moving at different speeds and directions, and it’s mixing,’ he explained.

‘Pilots don’t like turbulence any more than the passengers do and we would try to avoid it. Aeroplanes are just over-engineered to be safe in the environment that they operate in.’

What really happens if you don’t switch your phone to flight mode?

One of the most common things passengers get asked to do before take off is to switch their phones to flight mode.

Mr Manders explained a mobile that hasn’t been switched to flight mode may annoy pilots with an unpleasant sound in their headphones as it can cause interference with the plane’s radios.

He said the rules apply for both passengers and pilots.

‘Even in our before [engine] start checklist, we’ve got to make sure we have to turn off our personal electronic devices as well,’ he said.

‘If you’re a member of when mobile phones first came out. Being in your car, your speaker would crackle just before the phone rang, that’s the kind of interference [pilots] are talking about.

‘Individually, probably not so much but if everyone was doing it, it would cause interference.’