This is the emotional moment Jewish cousins who grew up as childhood friends in Romania before being separated during the Second World War were reunited after each spending 75 years believing the other was dead.

Morris Sana, now 87, and Simon Mairowitz, now 85, were filmed sharing a tearful hug in Tel Aviv, Israel, on Thursday after their relatives connected online and realised that both men were still alive.

Sana, who lives in Israel, can be seen walking into a hotel room before bursting into a big grin when he sees Mairowitz, who lives in the UK, standing and waiting for him.

‘Good to see you after all these years,’ says Mairowitz, as the men embrace each other and begin to cry. ‘Seventy-five years you waited.’ Morris Sana, now 87 (in blue), and Simon Mairowitz, now 85 (in red and white), reunited for the first time in 75 years last week after they were separated during the Second World War 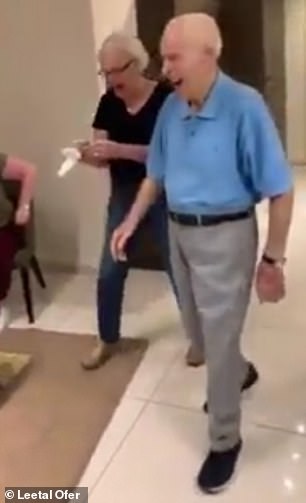 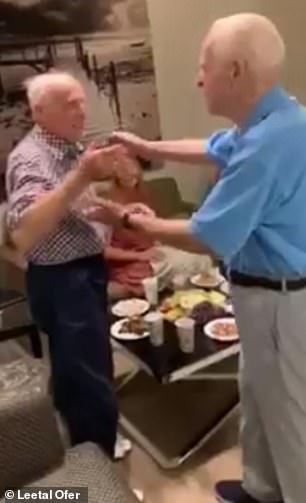 Sana and Mairowitz grew up as childhood friends but fled Romania with their separate families after a fascist uprising in 1940 saw the country join forces with the Nazis. They met again in Tel Aviv last week (left and right)

The last time the two men saw each other they were living in Romania where they grew up as close friends until a fascist uprising in 1940 saw the government deposed and their country allied with the Nazis.

Both managed to escape but with their separate families, meaning that neither of them had any idea the other had survived, People reports.

With no evidence to the contrary, both men assumed the other had been killed in a concentration camp somewhere in Europe during the Holocaust.

Sana eventually settled in Ra’anana, Israel, while Mairowitz ended up in the UK where both men established new lives for themselves.

It was not until Sana’s daughter began connecting with her long-lost cousins on Facebook that the families realised both men were still alive.

That led Mairowitz to fly to Tel Aviv last week where he reunited with Sana in an emotional moment shared by Sana’s granddaughter Leetal Ofer on Facebook.

At the start of the footage, Sana can be seen walking into a hotel room filled with smiling relatives where Mairowitz is waiting for him.

As he turns the corner he breaks into a huge smile and holds his arms in the air as he recognises his old friend.

‘You can see me now, can’t you?’ Mairowitz says as the two men move in for a hug.

‘Good to see you,’ a weeping Sana says as Mairowitz holds his face in his hands.

‘Good to see you too after all these years,’ Mairowitz replies.

‘Seventy five years you waited,’ Mairowitz adds. ‘It’s a long time. But we’ve got each other now.’ 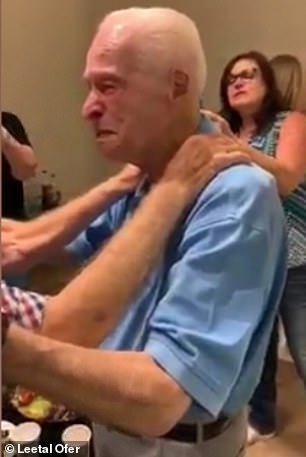 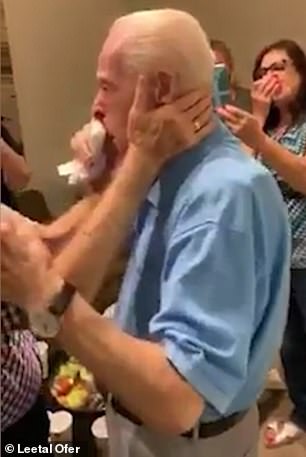 In emotional footage posted on Facebook, Sana (left and right) can be heard telling his old friend ‘it’s good to see you’ before breaking down in tears and saying ‘I can’t speak’ 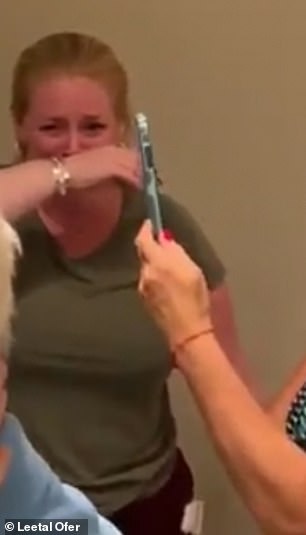 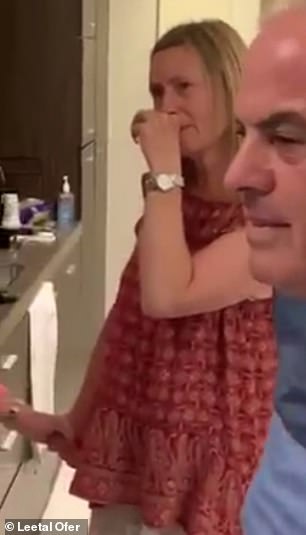 The reunion came after Sana’s daughter reconnected with some of her long-lost cousins on Facebook and the families realised both men were still alive (pictured, relatives crying)

Sana then tells his friend that he remembers him from when he was a little boy, to which Mairowitz replies: ‘You remember that do you? I can’t remember that.’

‘I can’t speak,’ Sana says as his relatives break down in tears around him.

The two men then sit down together before the video ends.

‘My mom recently found some of her long lost cousins on Facebook. To make a long story short…

‘My grandfather couldn’t find his cousin and best friend after the Holocaust and was sure that he was killed at the concentration camps.

‘He hasn’t seen or heard from his cousin in 75 years. We were able to arrange for the cousins to meet today.

‘The war tore so many families apart and to bring them together in Israel is so magical.’

An estimated 6million Jews were killed by the Nazis and their allies during the Second World War across Europe.

Leetal Ofer, Sana’s granddaughter, posted video of the emotional encounter online, writing: ‘The war tore so many families apart and to bring them together in Israel is so magical’

In Romanian, between 280,000 and 380,000 Jews lost their lives, largely as the result of fighting between Nazi and Russian troops.

However, tens of thousands lost their lives in pogroms, concentration camps, or were slowly starved to death in slow-moving trains traversing the country.

Those who were not killed were still subjected to harsh conditions including forced labour or life inside ghettos after their money and property was confiscated, according to the International Commission on the Holocaust in Romania.

Some 25,000 Romani gypsies were also deported to concentration camps, of which around 11,000 are thought to have died.

Romanian troops also participated in atrocities against Jews in other countries, including the Odessa massacre in neighbouring Ukraine.

A report commissioned and accepted by the Romanian government in 2004 concluded: ‘Of all the allies of Nazi Germany, Romania bears responsibility for the deaths of more Jews than any country other than Germany itself.

‘Romania committed genocide against the Jews. The survival of Jews in some parts of the country does not alter this reality.’