Jewish Holocaust survivor is stabbed to death in her Paris flat

Killed: Mirelle Knoll, 85, was found stabbed to death after a fire in her flat in Paris

A Jewish Holocaust survivor was found stabbed to death after a fire in her flat in Paris, and police are investigating if the killing had an anti-Semitic motive.

Two men have been arrested over the death of Mireille Knoll, 85, who is thought to have been murdered in her flat in the French capital, where she lived alone.

A 28-year-old man was arrested on Saturday, with the second man taken into custody on Sunday.

Ms Knoll’s sons said she had managed to evade the notorious 1942 roundup of over 13,000 Jews in Paris during World War II when she was just nine years old.

Fewer than 100 of those who were were detained at the so-called Vel d’Hiv cycling track and then sent to the Nazi death camps survived.

A right-wing French-Israeli MP has claimed that her death was an anti-Semitic attack, and while police say there is no immediate evidence of this, Jewish community leaders have chimes in, saying they are convinced she had been killed because of her faith.

MP Meyer Habib made the inflammatory claim in a tribute to her on his Facebook page on Monday, writing: ‘I visited the two sons of Mireille Knoll and their wives tonight.

‘I met a wonderful family full of humanistic values, united by love and destroyed by grief.

‘Look at the bright face of this woman, who was only sweetness and kindness, to imagine the suffering of her children and grandchildren, who live in Israel and who have just arrived in Paris to pay tribute on the eve of the Passover celebrations.’

He added: ‘Mireille Knoll was able to escape from the Vel d’Hiv roundup in 1942 thanks to her mother’s Brazilian passport.’

Mr Habib said he was convinced Mrs Knoll had become the victim of the ‘hatred and barbarism of an Islamist’, who ‘stabbed her eleven times in her family flat’. 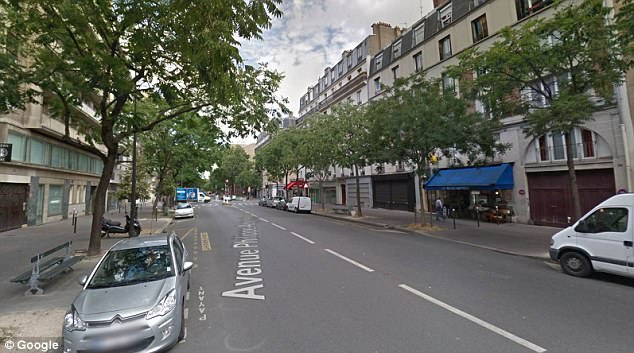 Arrest: Police have arrested two men in connection with the death of Ms Knoll in her flat on this road in Paris, and say that while they are investigating the possibility, there is so far no evidence of anti-Semitism

The Paris prosector’s office said Sunday that it had not yet determined a motive, but ‘is not excluding any hypothesis.’

‘The investigation has uncovered elements suggesting there was not an anti-Semitic motive, but this possibility has not yet been excluded,’ the SPCJ said in a statement late Sunday.

A spokesman for CRIF, France’s Representative Council of Jewish Institutions, said he expected ‘the utmost transparency in the ongoing investigation so that the reasons for this barbaric crime are revealed as soon as possible.’

Jewish groups in France regularly complain about growing anti-Semitism, saying they are regularly targeted by radical Islamists and far-Right activists.

In April 2017, Sarah Halimi, a 65-year-old Jewish woman, was killed in her Paris flat by Kada Traore, an immigrant from Mali who is said to have shouted anti-Semitic slogans as he carried out the crime. Traore is currently in a psychiatric hospital awaiting trial for murder.