A Jewish Labour MP who was subjected to a ‘Soviet show trial’ by party members was last night at the centre of claims that she will be the next MP to defect from Jeremy Corbyn’s party.

Just hours after Mr Corbyn claimed that there was no ‘widespread’ problem of anti-Semitism in the Party, Dame Louise Ellman was barracked by supporters of the Labour leader during a bruising meeting of her Liverpool Riverside constituency party on Friday evening.

The hard-Left activists overwhelmingly passed a motion supporting the activists who targeted fellow Liverpool MP Luciana Berger, leading a friend of Dame Louise to say: ‘Louise will not be in the party for much longer.’

Ms Berger, who is also Jewish and required a bodyguard at last year’s Labour Party Conference after receiving death threats, quit Labour on Monday saying the party was ‘institutionally anti-Semitic’ – a day after The Mail on Sunday revealed that she was on the brink of forming a breakaway movement in protest at Mr Corbyn’s failure to tackle the problem.

She was one of the seven Labour MP founders of The Independent Group.

This newspaper reported last year that Mr Corbyn and others on his staff had been heard describing Dame Louise as ‘the Honourable Member for Tel Aviv’, a claim which the Corbyn camp denied.

During raucous scenes in Friday’s meeting a motion was passed expressing ‘complete solidarity’ with the executive of Ms Berger’s Wavertree party and depicting the allegations that she was forced out of the party by bullying local activists as a ‘smear’.

Former Liverpool Mayor Malcolm Kennedy said he believed Dame Louise was being subjected to a ‘bullying’ campaign. ‘It’s the atmosphere, it’s the attitudes,’ he said. 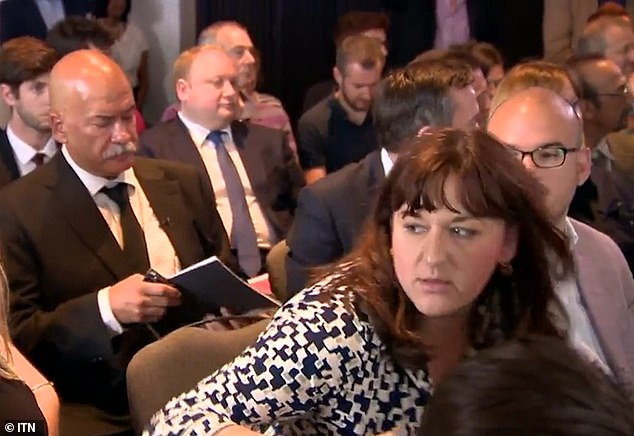 Dame Louise has been repeatedly attacked by Left-wing activists since speaking out on the anti-Semitism scandal, who have seized on her support for the Labour Friends of Israel group, of which she is vice-chairwoman.

Her friends said that she was ‘agonising’ over her future in the party which she joined over 55 years ago. One said: ‘She doesn’t like the idea of joining other groups but she is re-ally struggling with how the party’s handled the anti-Semitism row.’ 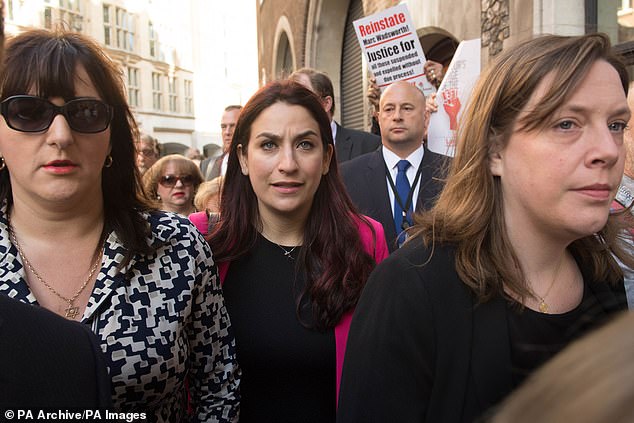 Corbyn tries to shift the blame.. on to the media

Jeremy Corbyn was accused of failing to realise the scale of his party’s anti-Semitism crisis after appearing to blame the media for much of the controversy.

The Labour leader had sought to defuse the row by issuing a ringing condemnation of anti-Semitism as ‘not acceptable in any form’.

He said: ‘If anyone is racist towards anyone else in our party – wrong. Out of court, out of order, totally and absolutely unacceptable.’ But Mr Corbyn sparked fresh protests by hitting out at the media after a week of dire coverage for Labour. 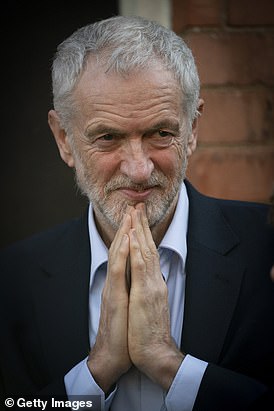 Last Friday, Mr Corbyn – when asked about claims of bullying in Labour – told Sky News: ‘I don’t believe it exists on a wide scale.’

Speaking in Tory defector Anna Soubry’s Broxtowe seat – a key Labour target at the next Election – he accused the ‘mainstream media’ of being ‘unkeen on relating to day-to-day issues that people faced in their lives’. He said that in a Sky News interview on Friday he had had to intervene to ask: ‘Is there any chance that anybody other than an MP could be referred to in any of your questions and we could actually talk about the homeless, the poverty, the hospital waiting lists?’

In the interview, Mr Corbyn claimed the media ‘only ever talk about Westminster gossip’.

But last night, Dudley North MP Ian Austin, one of the nine Labour MPs who walked out of the party last week, accused Mr Corbyn of failing to appreciate the scale of the crisis.

He said: ‘Labour will never be in a position to do anything about homelessness and poverty unless it faces up to the nature of his leadership and this really unpleasant culture of intolerance and extremism. Jeremy Corbyn still doesn’t get it.’

A fresh row erupted over claims Labour had failed to discipline an activist who suggested that Dame Louise and fellow Jewish MP Ruth Smeeth did not have ‘human blood’ – five months after the party’s deputy leader Tom Watson filed a complaint.

Mr Corbyn was challenged last week to explain why the party had apparently not suspended Arjum Wajid for ‘outrageous’ attacks on them last summer.

Ms Wajid tweeted: ‘Don’t know what runs through their veins, not human blood. Their hearts and brains totally devoid of humanity and eyes blind to truth.’

Separately at a private meeting in Westminster last week, Mrs Smeeth told Mr Corbyn: ‘I think you would be happy if I left the party.’

When he apparently failed to reply, sources say party general secretary Jennie Formby interjected to tell the MP: ‘I want you to stay.’

Mrs Smeeth then issued a vow to remain in the party, saying: ‘I am staying. If I am the last Jew in the Labour Party, I’m staying. I’m not going.’

In 2016, Mrs Smeeth left Mr Corbyn’s launch of an anti-Semitism report in tears after being taunted by a Corbynista.

Ian Austin, an adopted son of a Jewish refugee, announced he was leaving the party on Friday, but said he would not be joining The Independent Group. Former leader Ed Miliband, who is Jewish, has said he has no intention of quitting the party.

Last Friday, Mr Corbyn – when asked about claims of bullying in Labour – told Sky News: ‘I don’t believe it exists on a wide scale.’

Last night, when asked about the decision of her local party to express solidarity with the Wavertree Constituency Labour Party executive, Dame Louise said: ‘This is shameful.’ She refused to confirm that she would quit the party.

Party sources said they could not comment on individual cases but insisted Ms Wajid was still being taken through party disciplinary procedures.

A spokesman said: ‘The Labour Party takes all complaints of anti-Semitism extremely seriously and we are committed to challenging and campaigning against it in all its forms.

‘All complaints about anti-Semitism are fully investigated in line with our rules and procedures and any appropriate disciplinary action is taken.’