JFK’s last Christmas: Photos offer a look at the 35th President’s 1962 holiday with his family

The man in the white shirt and mustard-colored slacks handed out and hung up stockings, watched his young children put on a nativity scene, and played with them on the floor.

It was Christmas Day, 1962, and then President John F. Kennedy looked relaxed and happy surrounded by his family. His youngest child, two-year-old John F. Kennedy Jr sat on the lap of his mother, First Lady Jacqueline Kennedy, and played with the family dog, Charlie. JFK’s eldest child, Caroline Kennedy, then five, was seen with her arms thrust out and gave a baby Jesus doll to her grandfather Joseph P. Kennedy Sr.

Jacqueline Kennedy’s younger sister, Lee Radziwill, was also there with her husband, Prince Stanislaw Radziwill of Poland, and their daughter Anna Christina.

The Kennedys were celebrating their Christmas where they often did: Palm Beach, Florida. This time, however, they were not at the family home but rather had rented out the residence of C. Michael Paul.

It was the last time Camelot would be together for the holiday. 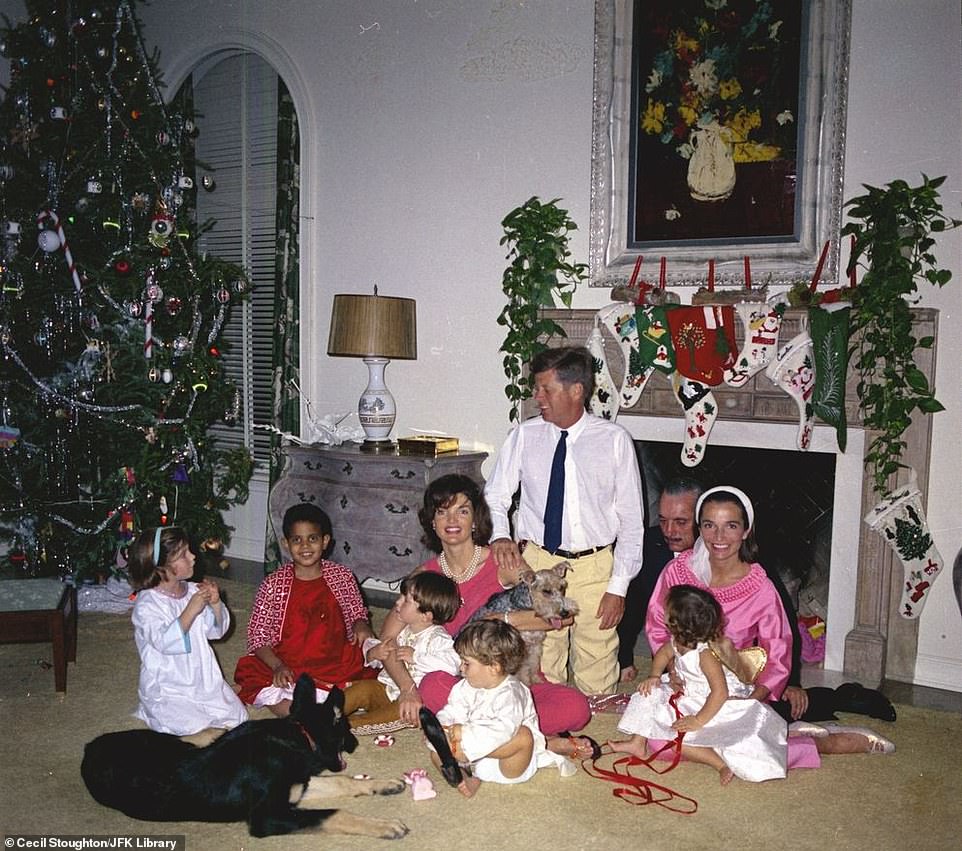 The Kennedy family spent many Christmases in Palm Beach, Florida and had a family home there. Above, the family is spending their Christmas Day in 1962 at the residence of C. Michael Paul 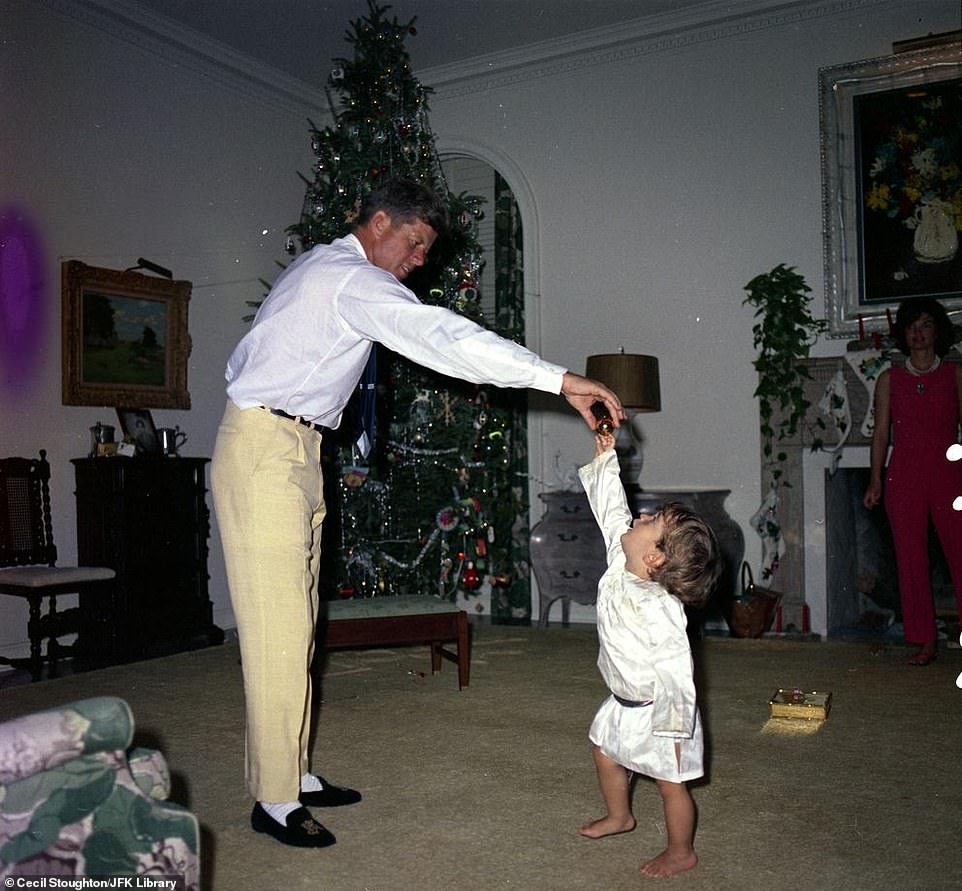 President Kennedy was almost two years into his term when this photo was taken on December 25, 1962. Above, the young president, then 45, and his two-year-old son, John F. Kennedy Jr hold a Christmas ornament 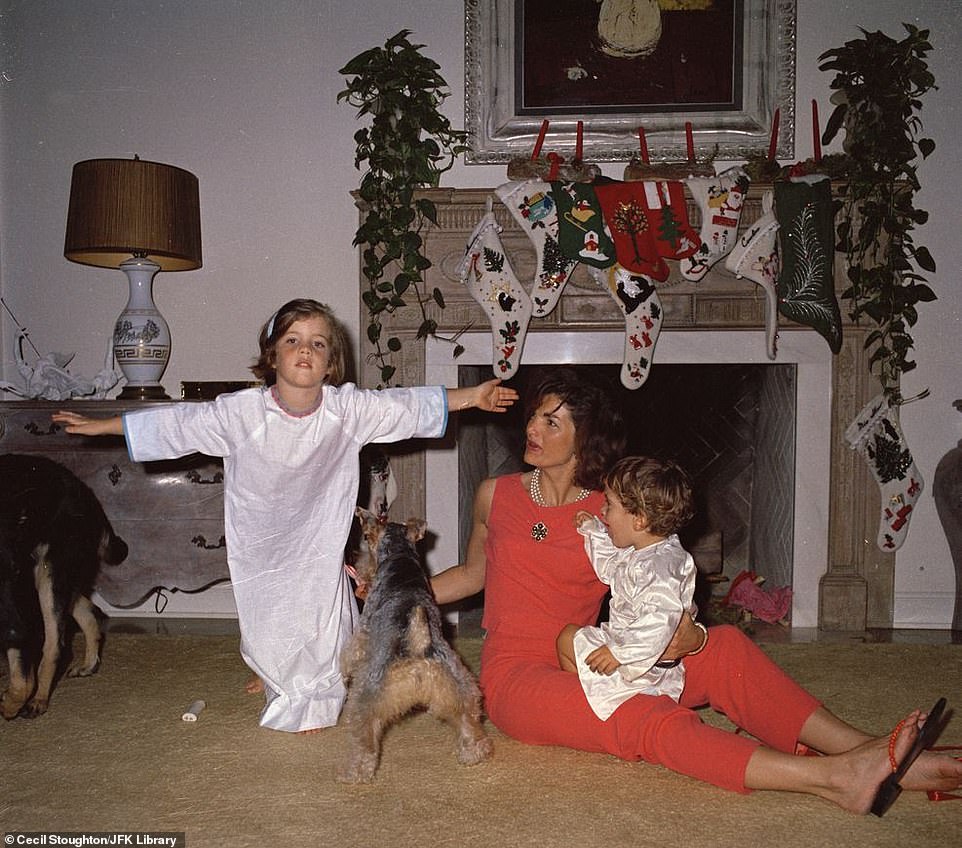 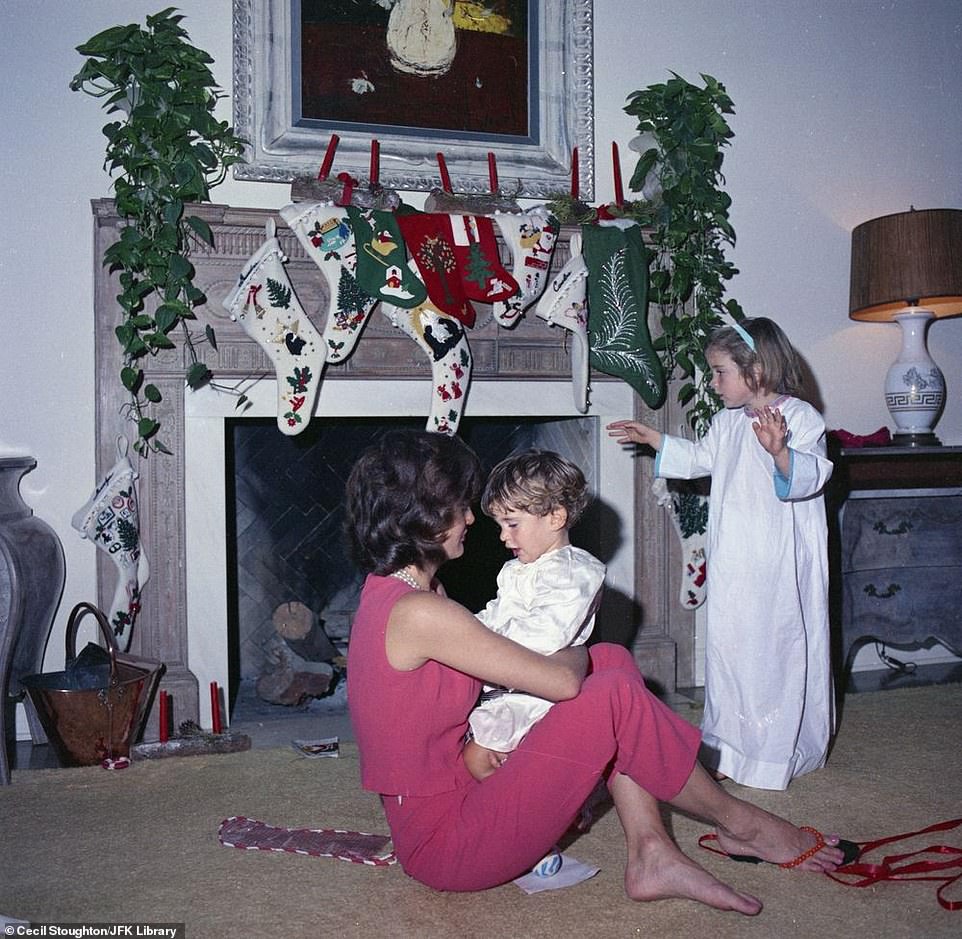 Jacqueline Kennedy holds her youngest son, John F. Kennedy Jr, with one flip flop off and ribbon on the floor during the family’s Christmas celebration in 1962. Caroline Kennedy (right), stands near the fireplace and Christmas stockings 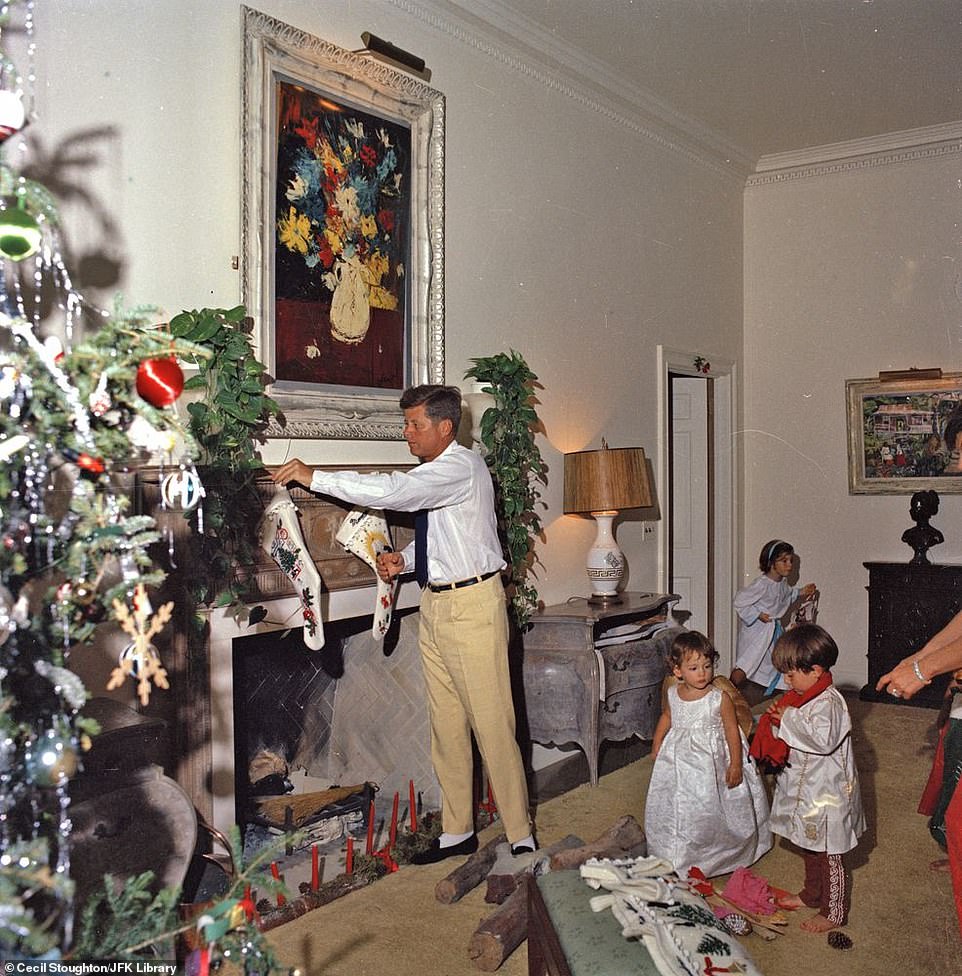 JFK hangs up Christmas stockings during the family’s holiday celebration on December 25, 1962. His niece and nephew, Anna Christina Razdiwill and Anthony Radziwill, stand at right, and his daughter Caroline Kennedy is near the door in background 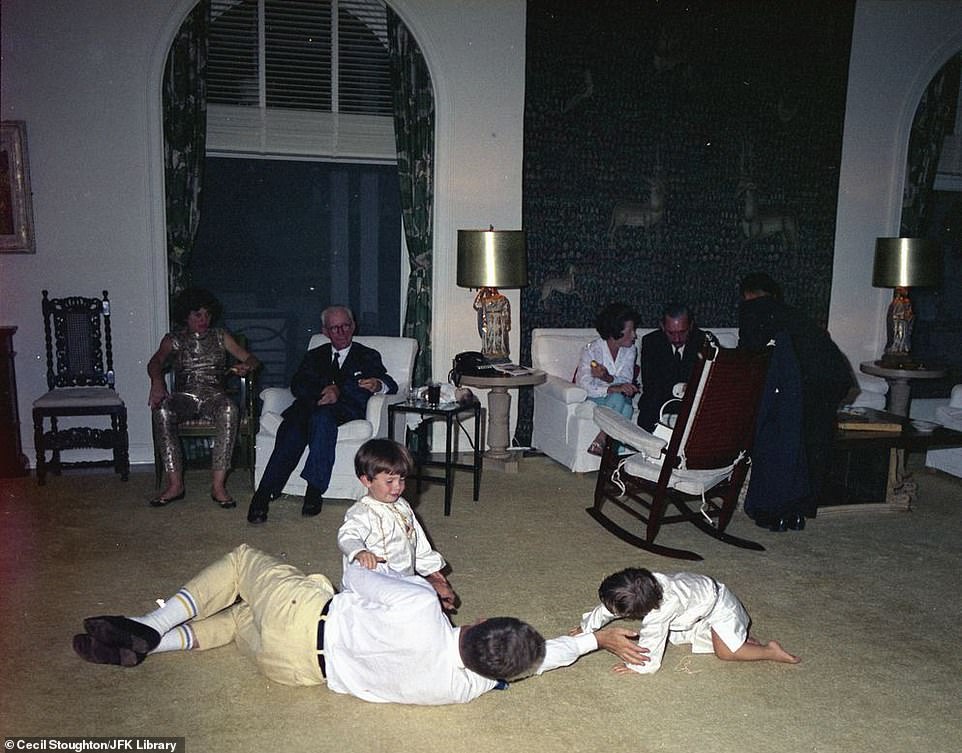 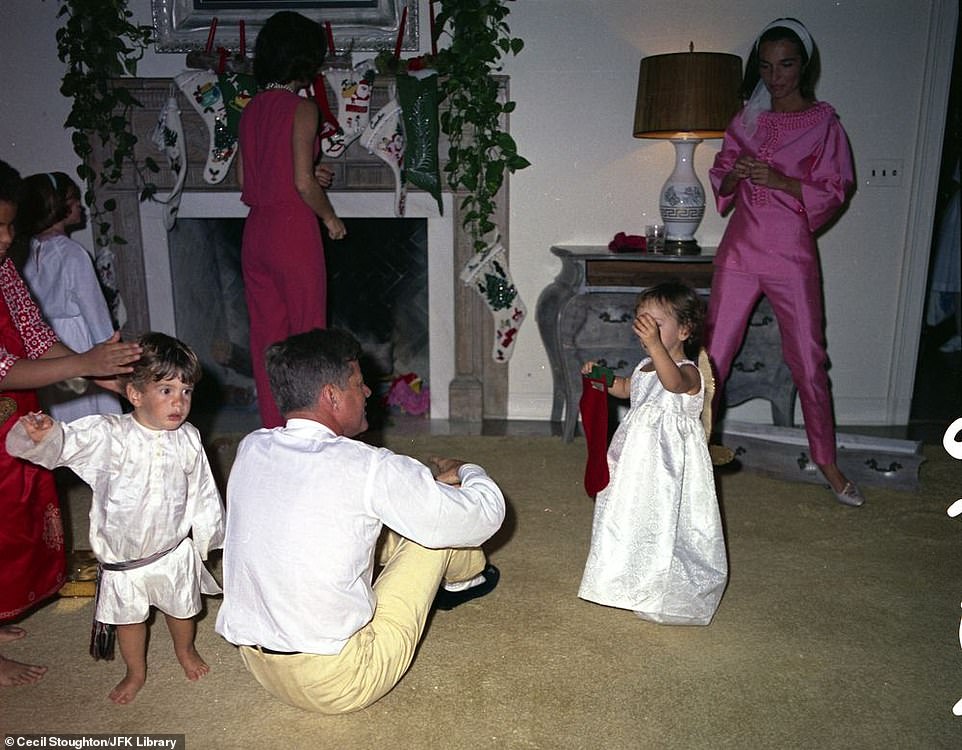 In what would be JFK’s last Christmas, the young president is with his family in Palm Beach, Florida in 1962. Left to right: Caroline Kennedy (back to camera), John F. Kennedy Jr, President Kennedy, First Lady Jacqueline Kennedy (standing by fireplace), Anna Christina Radziwill, and her mother Lee Radziwill (left)

It hadn’t been an easy year for the 35th president. In October, the Cuban Missile Crisis ended after almost pushing the two superpowers – the United States and the then Soviet Union – to the brink of nuclear war.

Kennedy had furthered US involvement in Southeast Asia while both the Cold War and the Space Race were heating up. He had asked Congress for millions to put a man on the moon before the 1960s ended to beat the Russians, who had their own program. That US accomplishment would happen when Apollo 11 landed on the moon on July 20, 1969, but one that Kennedy wouldn’t get to witness.

It was JFK’s last Christmas. On November 22, 1963, the young president was assassinated in Dallas, Texas. He was 46.

But the photos, which are part of the archive at the John F. Kennedy Presidential  Library and Museum in Boston, foretold nothing – just happy scenes of a family together. 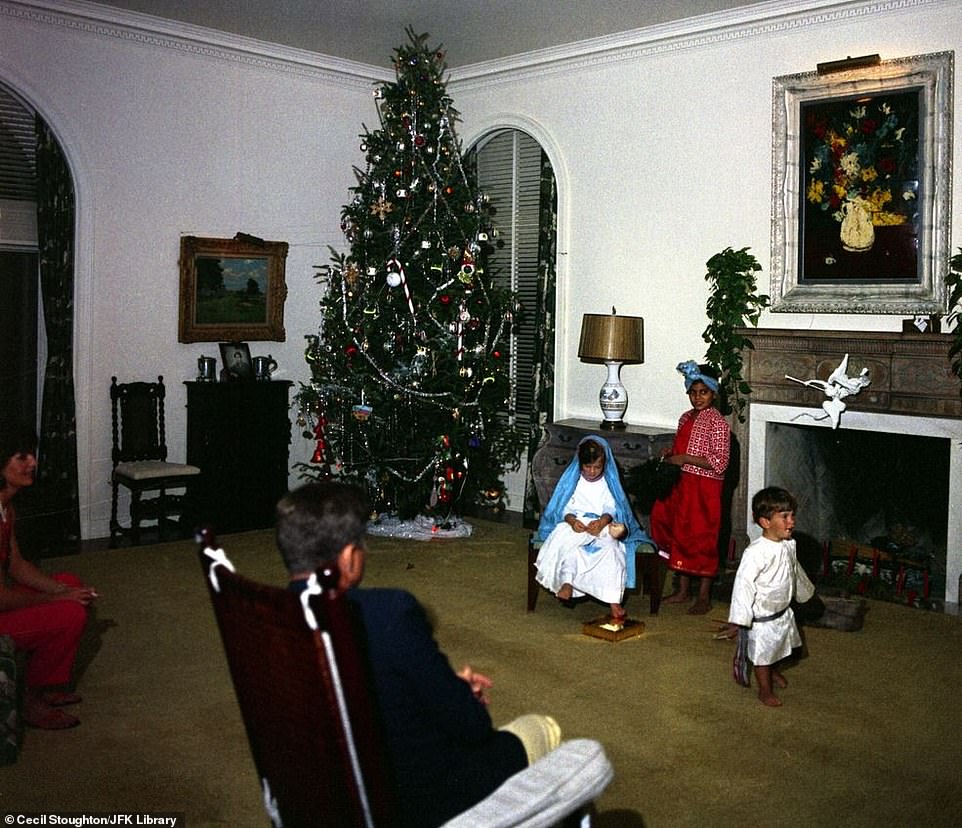 For his last Christmas JFK spent with his family, his children performed a nativity play. From left is Jacqueline Kennedy, JFK (center in chair) and they watch as Caroline Kennedy (in blue and white), Gustavo Paredes (son of Mrs. Kennedy’s assistant, Providencia Paredes), and John F. Kennedy Jr did a scene 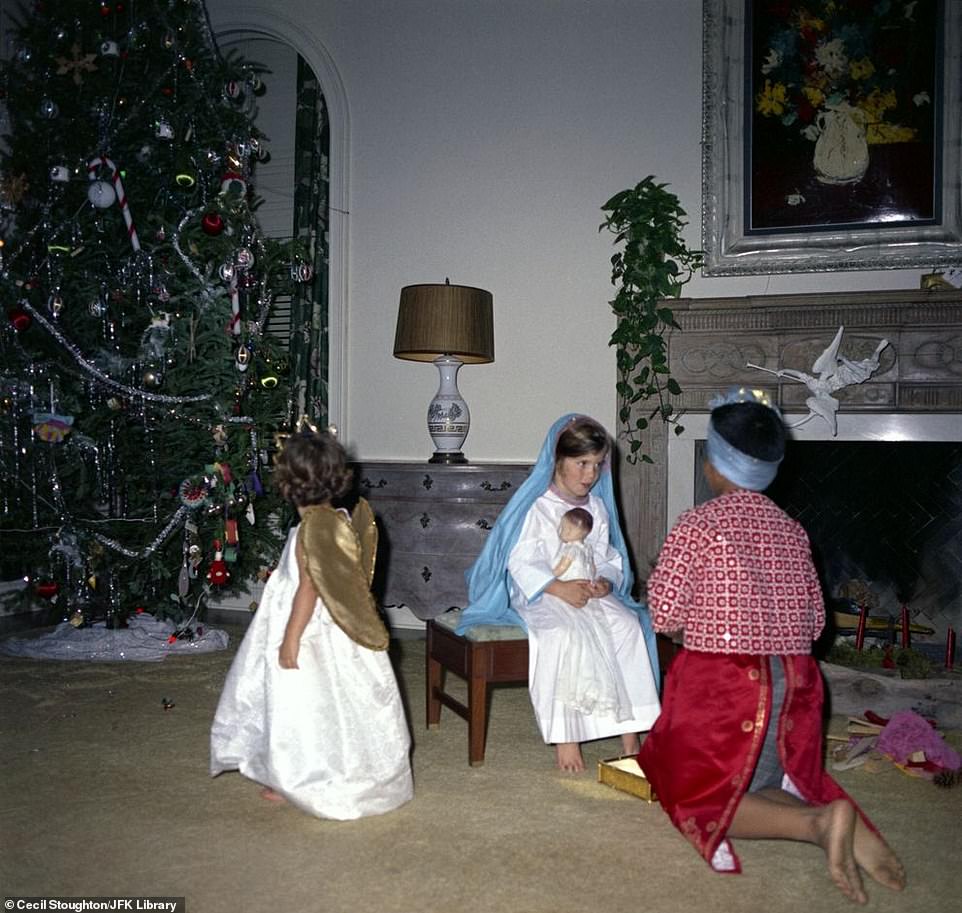 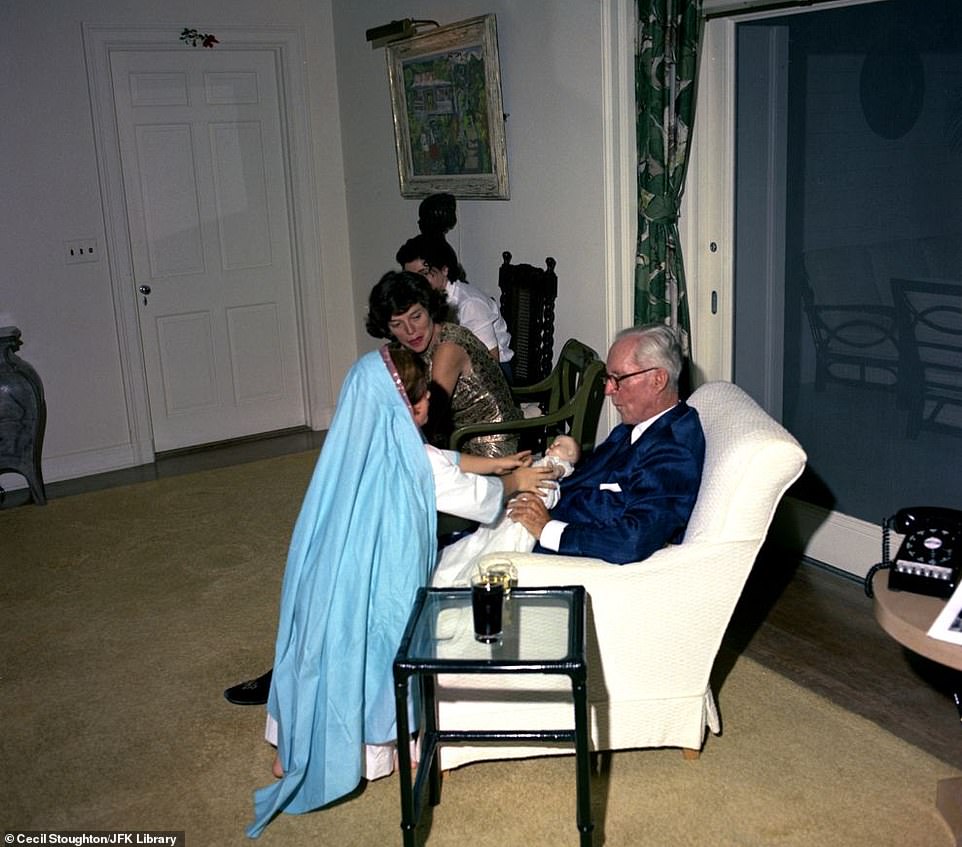 Caroline Kennedy (right) hands her baby Jesus doll to her grandfather, Joseph P. Kennedy Sr (left) after she, her brother, John F. Kennedy Jr, and others performed a nativity play for their parents and family while celebrating Christmas in 1962. Eunice Kennedy Shriver (center) sits in the green chair left of her father 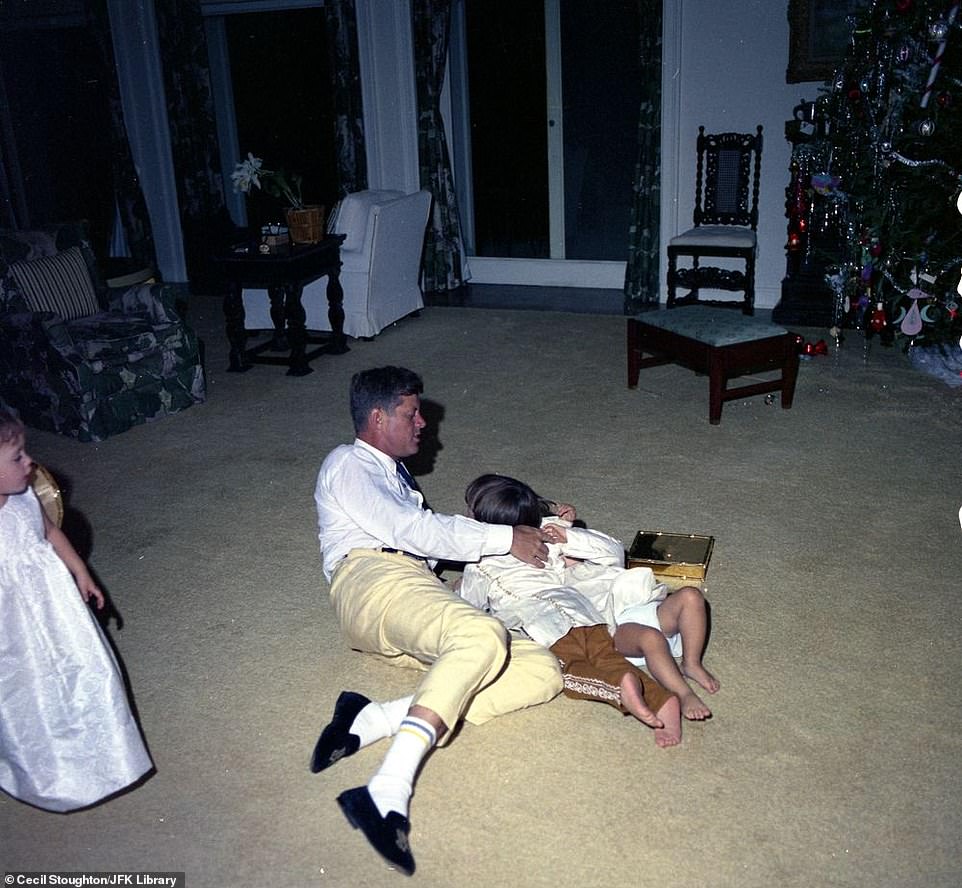 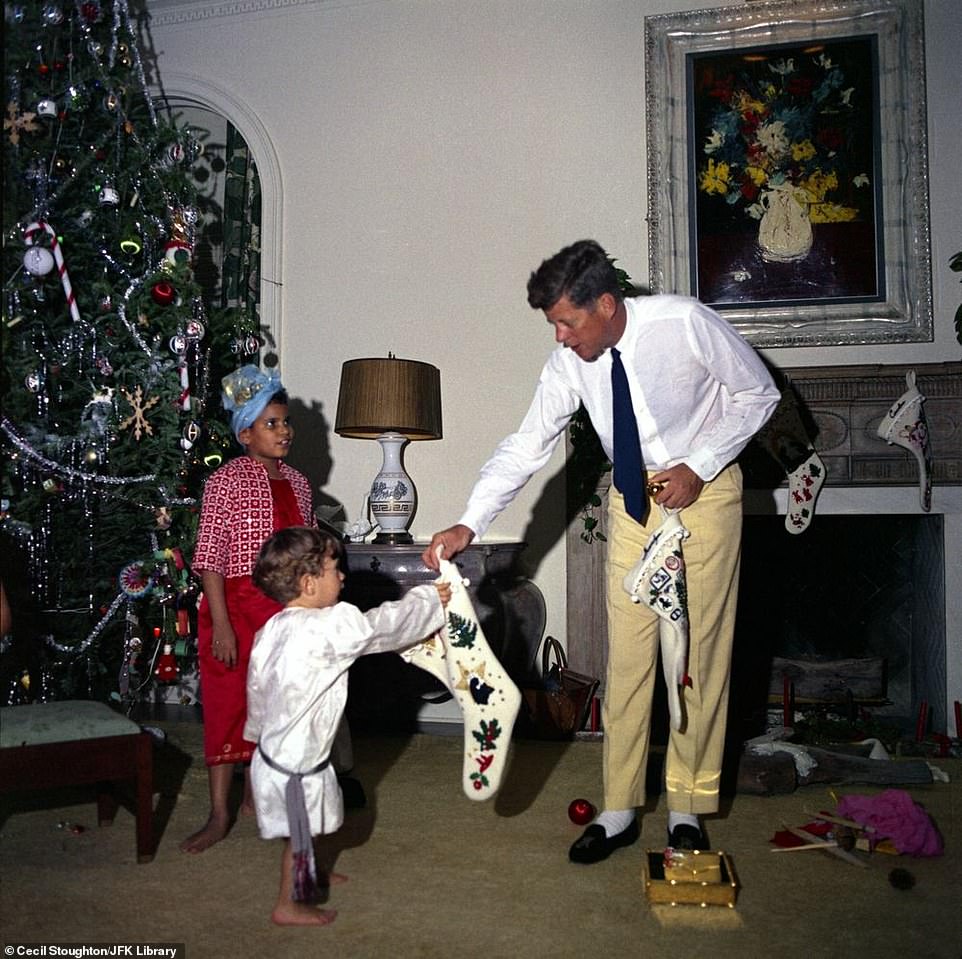 JFK hands a stocking to his son, John F. Kennedy Jr (center) while Gustavo Paredes (left) the son of his wife’s assistant, looks on during the family’s Christmas in Palm Beach, Florida in 1962 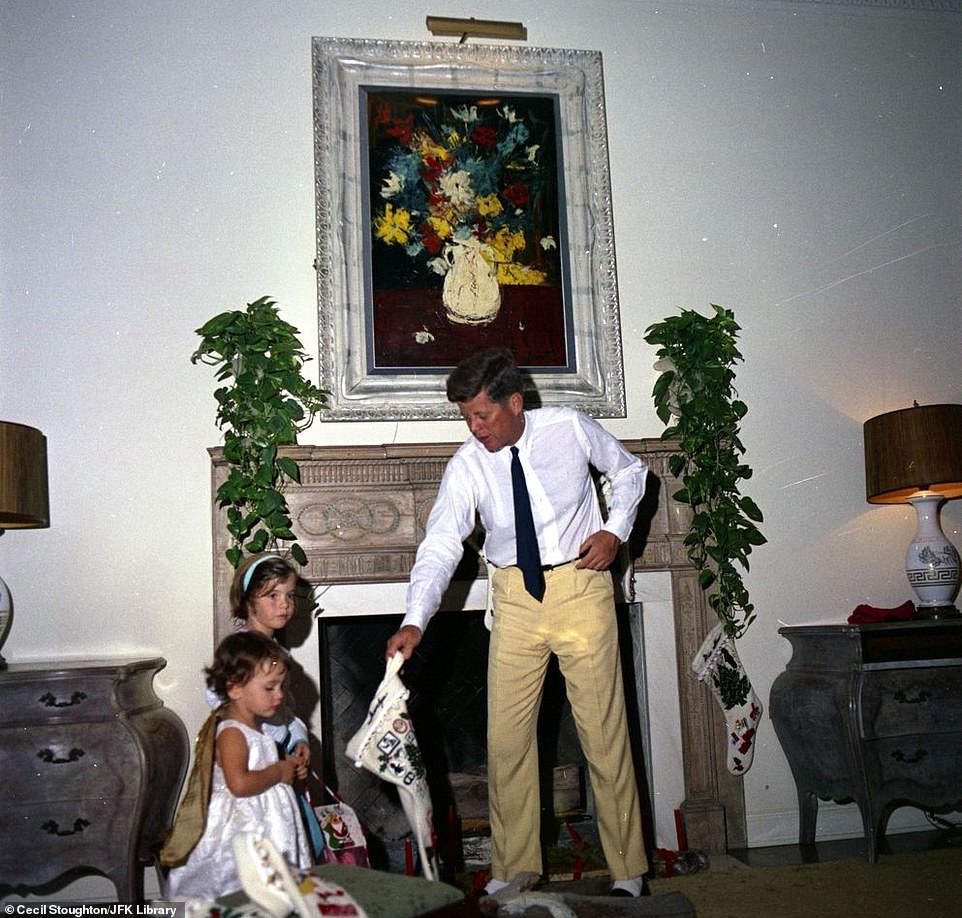 During the family’s Christmas celebration in 1962, the young president fulfilled the typical duties of parents that included handing out stockings. Above, JFK gives his daughter Caroline Kennedy (standing in back) and his niece, Anna Christina Radziwill (left) Christmas stockings 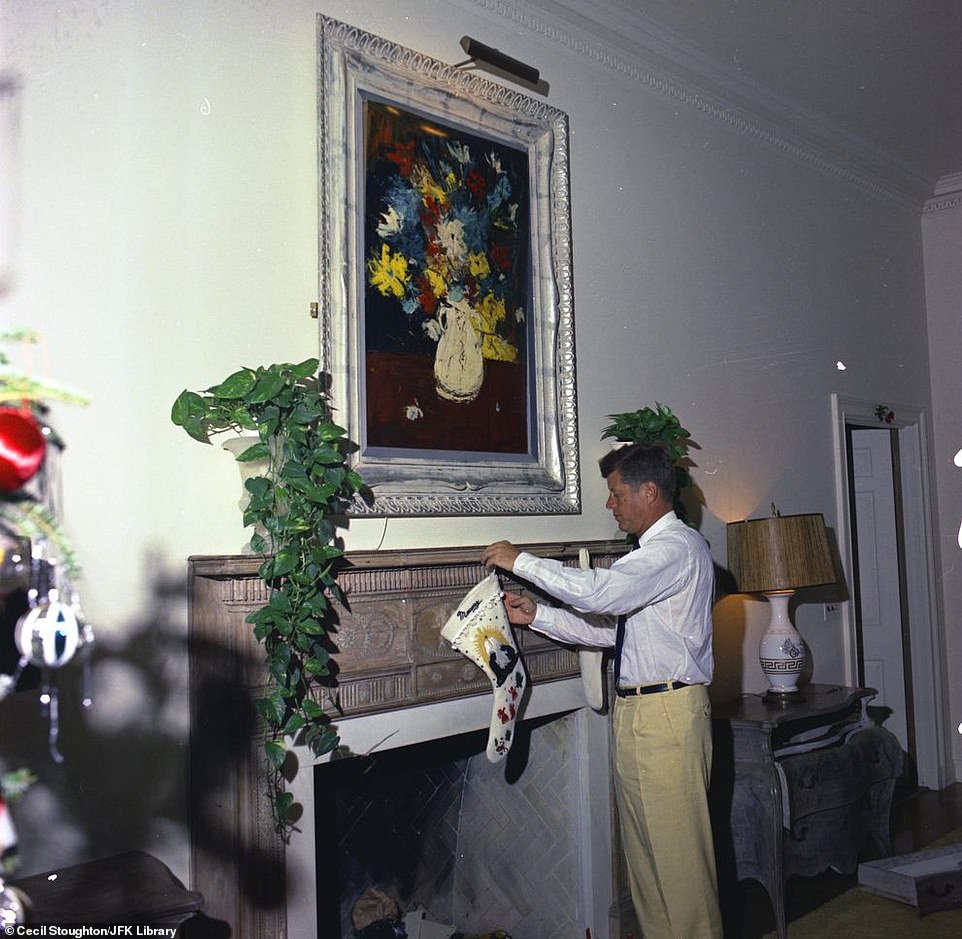 During the Cuban Missile Crisis in October 1962, nuclear war between the United States and then Soviet Union was a real concern. That was not the only issue JFK handled in the second year of his presidency: he also asked Congress for more money for the space program and increased US involvement in Southeast Asia. Above, JFK hangs a Christmas stocking during the family’s celebration in Palm Beach, Florida 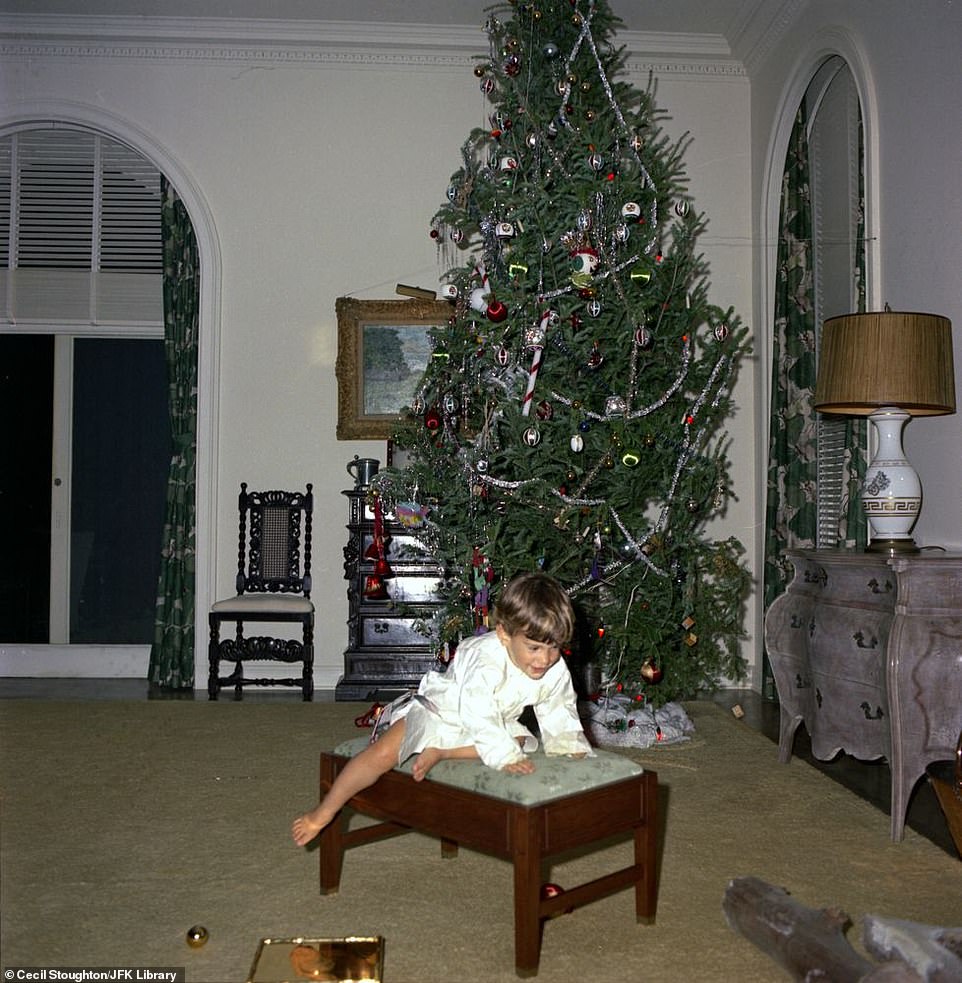 John F. Kennedy Jr was two-years-old in 1962 and is seen here playing during Christmas. He would go on to be a lawyer and launch the magazine George, before his untimely death at aged 38 when an airplane he was flying crashed in 1999 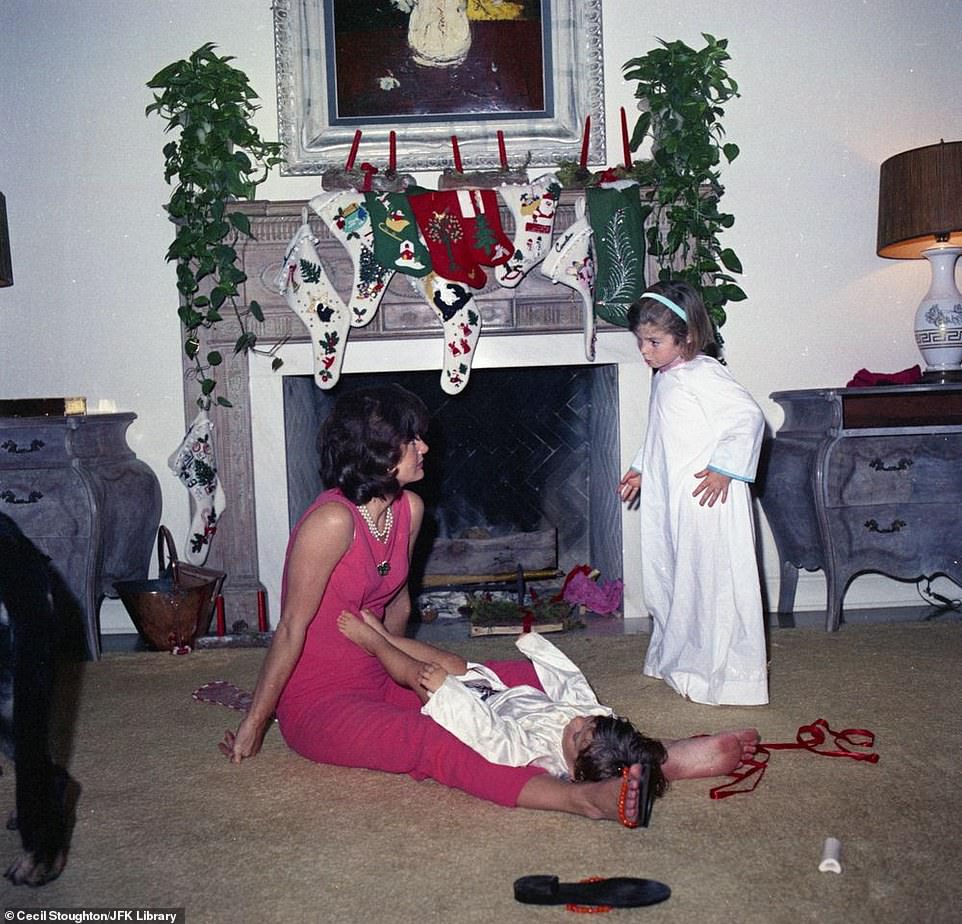 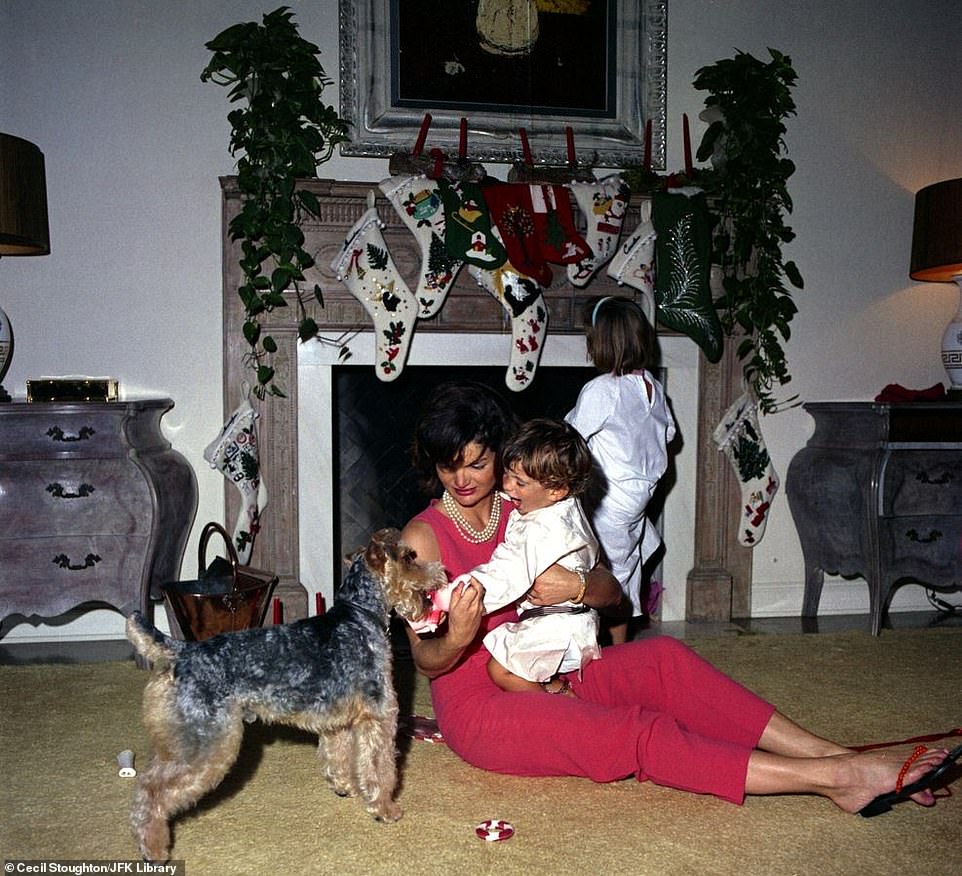 John F. Kennedy Jr looks delighted by the family dog Charlie on Christmas in 1962. Jacqueline Kennedy holds John while his older sister Caroline Kennedy stands at right (back to camera)