The Mail on Sunday has learned that the Prime Minister and Home Secretary have been briefed by the intelligence services about claims that British-born Ms Begum was witnessed preparing suicide vests for would-be martyrs – sewing them on to the bombers so that the devices could not be removed without detonation.

Intelligence sources told this newspaper they have been informed of her chilling role in Syria actively preparing jihadis to take their own lives as Islamic State collapsed.

If the allegations prove to be correct, they will shatter the claim by the teenager from East London that she was nothing more than an IS fighter’s wife after she enlisted with the death cult while still a schoolgirl in 2015.

It is understood the information was gleaned by allied spy agencies – believed to be the CIA and Dutch Military Intelligence – from interrogation of other Western IS converts. It is not known whether Ms Begum was a willing participant in the acts.

After being found by journalists in a camp in northern Syria in February following the collapse of IS’s grip on the region, Ms Begum, now 19, insisted she had never ‘done anything dangerous’ during her time with the terror group and begged to be allowed back into Britain. But Mr Javid branded her a danger to the UK and revoked her citizenship.

She said: ‘When I went to Syria, I was just a housewife. I just stayed at home and looked after my kids. I didn’t do anything dangerous. I never made propaganda, I never encouraged people to come to Syria. They don’t have proof that I did anything dangerous.’ 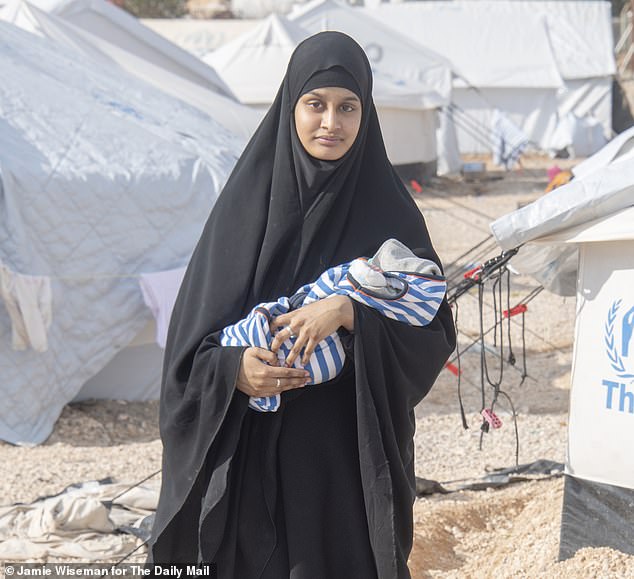 The 19-year-old jihadi bride from Bethnal Green, east London has been stripped of her British citizenship by Home Secretary Sajid Javid. Javid and PM Theresa May have received top secret briefings from the security services about Begum’s role with the terror organisation 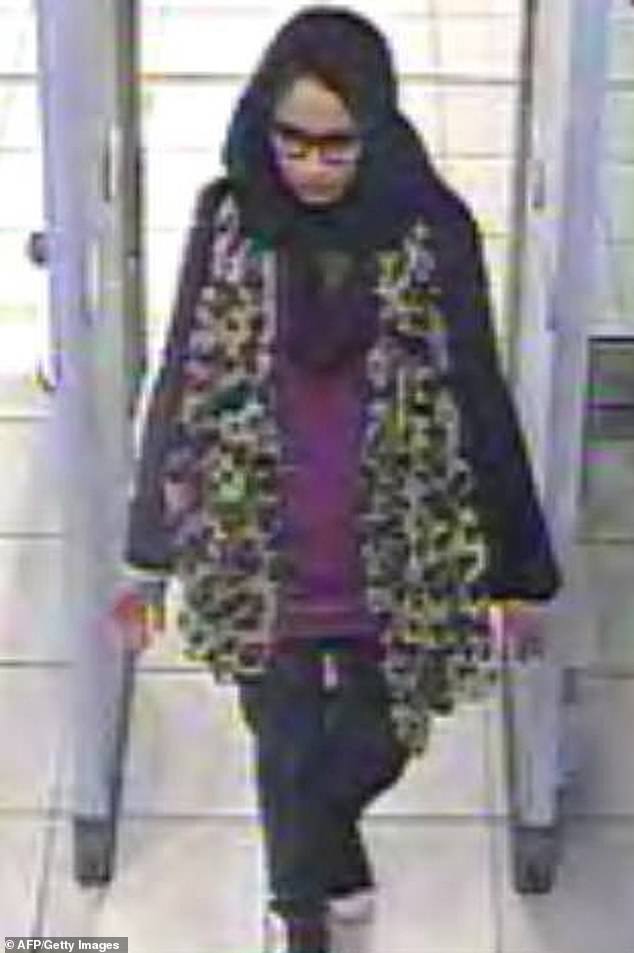 Begum, pictured at Gatwick Airport in February 2015, flew to Turkey before sneaking into Syria to join the terror organisation

However, a senior intelligence source said: ‘She was involved and her former comrades have grassed her. She was literally stitching the vests, stitching them into the vests.’

After running away from Bethnal Green, Ms Begum lived in the Syrian city of Raqqa under the control of IS with her husband, a Dutch extremist named Yago Riedijk.

But a Government source said: ‘Those who stayed to the end were the hardcore, there is no disputing that. Lots of them went [to the IS stronghold] for a couple of weeks, hated it and came back. Many more left when Raqqa fell over a year ago. But she stayed to the bitter end and now we know why.’

Other Whitehall sources told The Mail on Sunday that the top-secret intelligence has been shared at the highest levels of government following the row over Mr Javid’s decision to block Ms Begum’s return. However, there are concerns that such evidence may not meet the legal threshold for trial in Britain due to complications over whether it would be permissible in court. 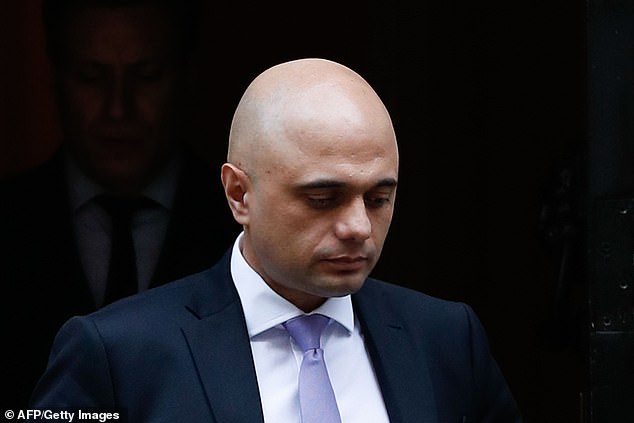 Javid received criticism for blocking Begum’s return to the UK – especially after he infant child died in the Syrian refugee camp. She claimed to have lost her two eldest children as well

The news emerged as new laws came into force last week that would see Britons jailed for ten years just for travelling to warzones. The Counter-Terrorism and Border Security Act 2019 makes it illegal for UK citizens to travel to terror hotspots, as part of a clampdown inspired by the legal grey area around the Begum case.

Welcoming the new measures, Mr Javid said: ‘These laws give police the powers they need to disrupt terrorist plots earlier and ensure those who seek to do us harm face just punishment.’

Having revoked Ms Begum’s UK citizenship to block her return to Britain, a furious row was sparked when her two-week-old son Jarrah died of pneumonia in a Syrian camp. Senior Tories distanced themselves from Mr Javid’s decision, describing the Government as ‘morally responsible’ for the death of the newborn, while Labour labelled the situation ‘a stain on the nation’s conscience’. 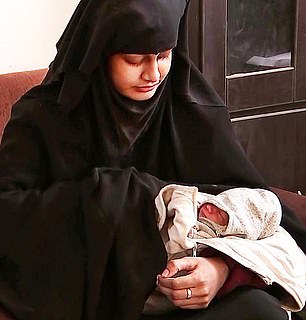 Begum’s two-week-old son, Jarrah, pictured, was a British citizen at the time of his death

Jarrah was born a British citizen on February 16, shortly before the Home Secretary stripped his mother of her passport. Ms Begum’s British family had begged Mr Javid to allow safe passage for Jarrah to come to London.

Tory MP Philip Lee suggested it was Mr Javid’s desire to lead the party that was behind his blocking of Ms Begum’s return. He urged the Home Secretary to reflect on a decision ‘driven by populism and not by any principle I recognise’.

Tom Tugendhat, chairman of the Foreign Affairs Select Committee, said: ‘Cases that rely on secret intelligence for security decisions can be hard to explain in public.

If true, these allegations suggest a reason Ms Begum may have stayed in IS-controlled territory to the end, and would suggest a good reason to suspect she would be a danger to the UK.’

Home Office figures show more than 900 Britons travelled to the conflict in Syria, with 20 per cent killed and around 40 per cent having returned to the UK. Only the most dangerous have been barred from returning.

Ms Begum’s father Ahmed Ali said last night: ‘If she has done anything wrong, she should be brought to England and punished. As far as I know she was a housewife when in Syria.’

The Begum family’s lawyer demanded the Home Office make any evidence they hold against their daughter public. Tasnime Akunjee said: ‘On behalf of the family, we would like to see this evidence, given that it has been leaked, and have it tested in proceedings in due course rather than through hearsay.’

The Home Office said: ‘Decisions to deprive individuals of their citizenship are based on all available evidence and are not taken lightly.’ 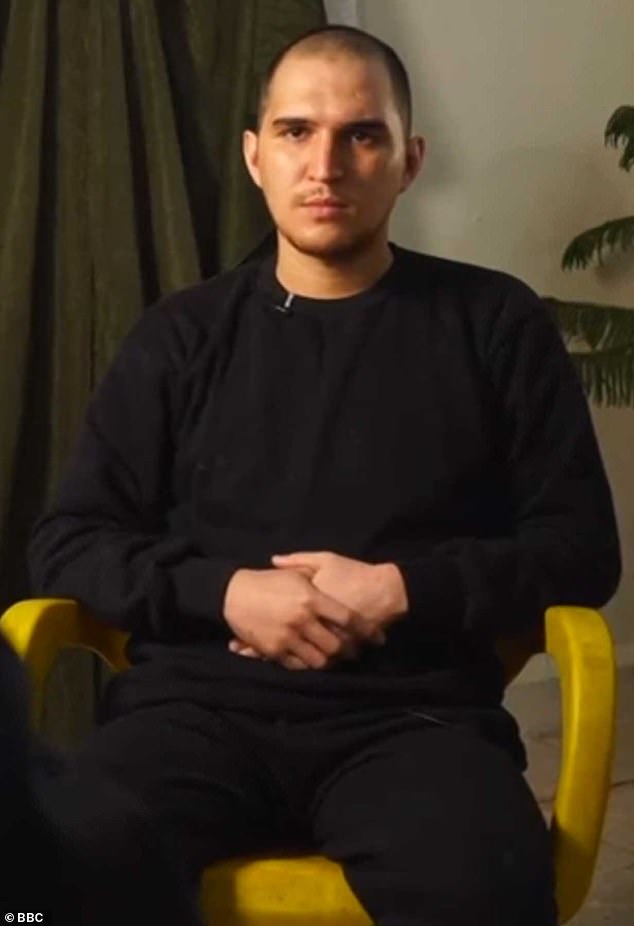