A jilted lover who sent ‘racist death threats’ to his ex-girlfriend and taunted her at a pub while wearing a Donald Trump hat has been spared jail but banned from contacting her.

Christopher Sambrook, 29, wore a Make America Great Again baseball cap and shouted right wing rhetoric in front of Catherine Bell as she was toasting a friend’s move to America at a party in Altrincham, Greater Manchester on January 21, 2017.

The next day he posted in their social circle’s group chat saying he felt like stabbing someone who did not support the US President – knowing Miss Bell was a critic of his – and ‘made derogatory comments about ethnic minorities’, Manchester Magistrates Court was told.

Miss Bell and Sambrook had been dating for a year but separated in 2012. They remained in the same friendship group but there was an ‘escalation of his behaviour’ when she started a relationship with another man, the court heard.

During a three year campaign Sambrook, an IT quality control inspector, made comments about the Ku Klux Klan, cracked racist jokes on social media and sent explicit messages to Miss Bell about their former sex life.

Police warned Sambrook about his conduct but he was arrested last year after referencing the transgender sibling of Miss Bell’s new partner – sending a message on WhatsApp saying: ‘Let the tr***y brothers burn.’

Sambrook, from Sale, was warned he faced jail after he admitted racially aggravated harassment but his 12-week jail sentence was suspended for 18 months.

He apologised for his conduct and was banned from contacting Miss Bell for two years under the terms of a restraining order.

In a victim personal statement Miss Bell said: ‘Since these offences I have not been going out for fear of bumping into him. I was afraid when going out with friends that he would be there.

‘I’m worried for myself and my family that he will carry out the contents of his messages. This has affected me a lot and I don’t want to continue living like this. I am worried about his future actions.’

Prosecutor Beth Pilling told the court Miss Bell described an escalation of his behaviour after she got into another relationship with another man.

When Miss Bell entered into a relationship with another man, she began to receive derogatory comments directed to her about such things, the prosecutor said.

That relationship ended in 2013 and she entered into another new relationship in 2016. The offences started in November that year when Miss Bell woke up and she checked her phone to find the defendant had posted a ‘barrage of abuse on Facebook on that group chat’, with comments targeted towards her and her ex partner’s tattoos.

‘It appeared to be a rant which came out of nowhere, and she said she had no idea why he’d do such a thing and she believed he was trying to upset her and humiliate her,’ the prosecutor said.

‘He then made a comment about extreme sexual acts which he said they had done together and he called her a ”wh***” and a ”hooker”, and told her she should die and burn.

‘He also mentioned an MSN conversation between them from when they were together which references material of a sexual nature and tried to humiliate her by threatening to (copy) it into the chat. 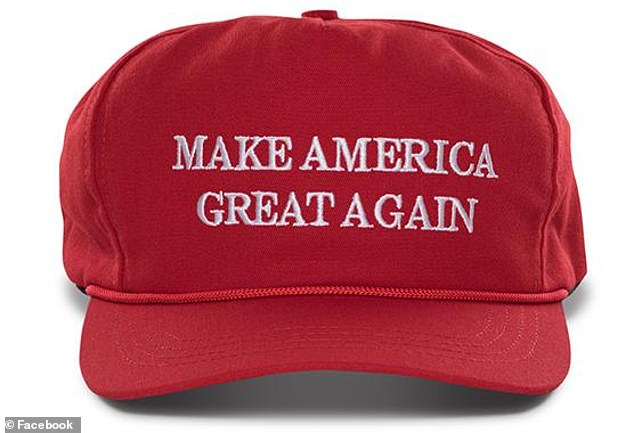 ‘Over the next few weeks he continued to send her texts and calls with racist death threats to her and her family.

‘He continued to contact her to the point that she telephoned the police and informed them of his behaviour.

‘He was formally warned and she said she wanted no further contact from him and wanted him out of her life.’

During the January 2017 pub incident in Altrincham Miss Bell had gone out with friends to celebrate her friend’s trip to America.

‘During the evening the defendant entered the premises and appeared to be intoxicated,’ the prosecutor said.

‘He was wearing a Donald Trump baseball cap and shouting a lot, making right-wing views and comments were made towards her.

‘Miss Bell’s friends saw this going on and circled around her and told him he couldn’t continue with the behaviour.

‘But the following day he posted in the group chat saying he felt like stabbing someone with a knife and identified a target of anyone who didn’t like Donald Trump, knowing full well she was against Donald Trump.

‘He also made derogatory comments about ethnic minorities.’

Sambrook sent Miss Bell an email one month later wishing her a happy Valentine’s Day while ‘trying to reach out to her’.

In August that year he contacted her again and made comments ‘about Donald Trump and the KKK’. Miss Bell banned him from contacting her and reported comments to the police – who warned Sambrook.

He would later send a picture of a slave ship quoting the phrase ‘Black Friday sale’.

‘She believed it was directed towards her and caused her more upset and distress,’ the prosecutor said.

In December 2018 Miss Bell received unwanted contact when Sambrook attended her house and apologised to her father and ‘indicated he didn’t want to proceed further’. Miss Bell told him to stay away.

Later that month Sambrook sent Miss Bell a WhatsApp message saying he had seen her waiting at a Metrolink stop and he wanted to approach her. He was told that he would be arrested if his behaviour continued.

In July 2019 Miss Bell notified the police after he posted a further abusive message on the Facebook page.

‘The post makes reference to her partner’s personal circumstances, with several references to people being transgender, he made homophobic comments including one which read: ”let the tr***y brothers burn”,’ the prosecutor told the court.

‘She said her partner’s twin sister is transgender. He continued to make right wing comments.

‘Following this the victim asked the police for a non-molestation order. During the hearing held at the family court, he admitted sending all the messages. The defendant has no previous convictions and has never been in court before. She has been clearly distressed for a long period of time.’

Defence lawyer Gavin Clarke said that Sambrook is under ‘no illusion’ that what he did was ‘wholly wrong’, and had admitted everything from the moment of his arrest.

‘There are only 13 separate instances when there has been some form of contact, three or four of those had been direct contact with her, and the other instances were on the various platforms,’ Mr Clarke said.

‘This hasn’t been several calls every evening or 32 texts in a day. There was seven months between one of the contacts and the next.

‘This is a young man who struggled with the breakdown of a relationship. He didn’t take the parting well and the fact that his ex partner finds herself in another relationship. He found himself struggling with that.

‘There are various sick notes and doctors medical notes to say he suffered with depression and anxiety. He was not himself and he was not in the right frame of mind.

‘The penny really dropped when he found himself before the civil courts due to the non-molestation order in July last year. From that date there has been no further contact. He will adhere to any order of the court.

Sentencing him, JP Jo Hossle-Standring told Sambrook: ‘We do feel this offence crosses the custodial threshold, but we feel we can suspend the sentence.’