Jim Carrey has hit at the Trump family once again, and this time it was Donald Trump Jr and Eric who were struck by his paintbrush.

The actor painted a gruesome picture that appears to show Trump’s two sons being gorged to death on the tusks of an elephant.

Carrey’s painting shows the two men, one brunette and one blonde, wearing matching hunting gear, with rifles slung around their shoulders.

The portrait is simply captioned with the hashtag #TeamElephant.

Jim Carrey has struck at the Trump family once again, painting two men who appear to be Donald Trump Jr and Eric Trump getting gorged to death on the tusks of an elephant 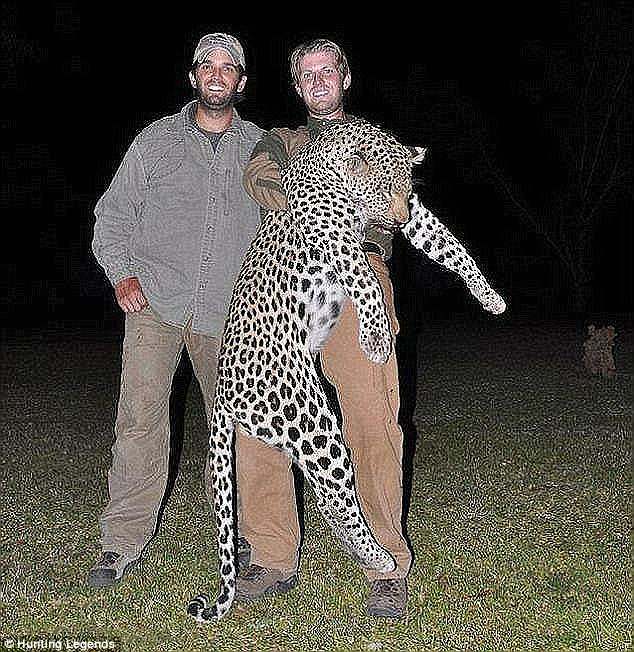 It is no secret that Donald Jr and Eric Trump are big fans of trophy hunting, with a number of photos circulating from a big game safari they went on in Zimbabwe (pictured)

It is no secret that Donald Jr and Eric Trump are big fans of trophy hunting. Photos of a big game safari they went on in Zimbabwe in 2012 still circulate online today.

The pictures show Donald Jr proudly holding up a dead elephant tail, and also feature the brothers posing with a dead elephant, crocodile, and other animals.

Carrey’s painting also comes just weeks after it was revealed that the Trump administration would repeal Obama’s ban on elephant trophy hunting.

A March 1 memorandum from the US Fish and Wildlife Service said the agency would allow Americans to bring tusks and other elephant body parts back to the country as trophies on a ‘case-by-case basis’. 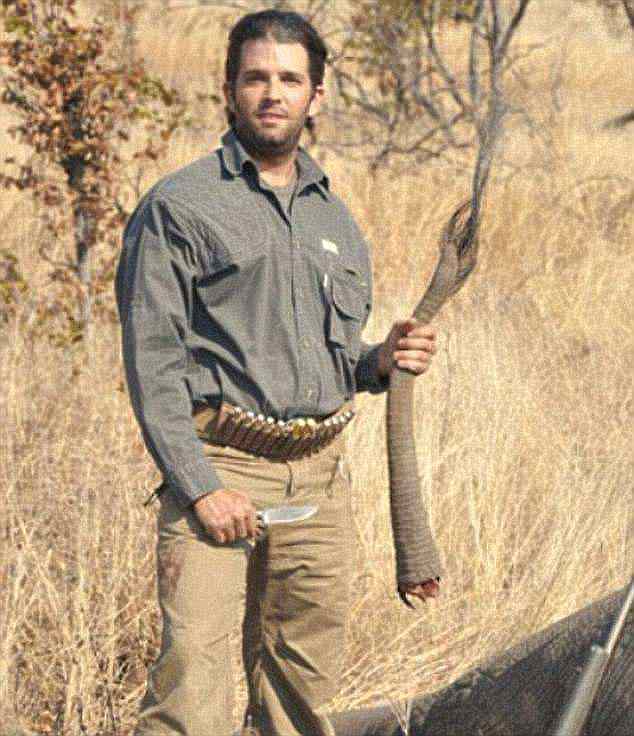 One such photo shows Donald Jr holding up an elephant’s tail proudly, as well as a knife 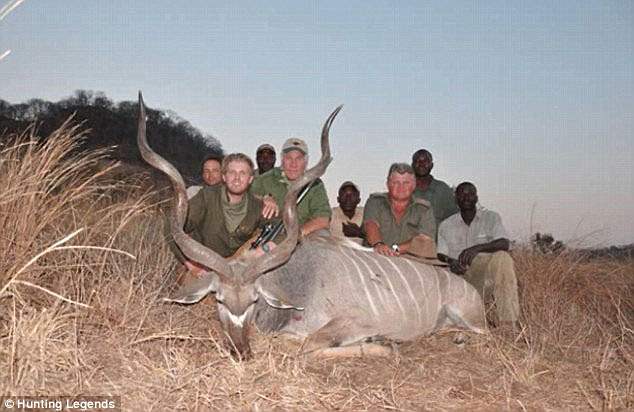 Additional photos depicted the brothers posing with a dead elephant, crocodile, among others

Carrey’s painting has since gone viral, garnering more than 10,000 retweets and nearly 46,000 likes this week.

While many cheered Carrey on his for artistry, one man revealed he had reported the actor to the FBI for ‘threatening the life of the president’s sons’.

‘I had to notify the authorities’, he said in the tweet, which was posted with a grab from the FBI website with the message ‘Your tip has been submitted’. 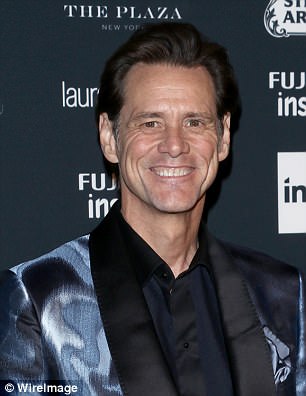 But others praised the actor for hitting out at the Trump family and lending his support to elephants.

‘Elephants are amazing creatures. The are the gentle giants of the animal world,’ one woman wrote.

‘They mate for life, look out for their family, celebrate births and mourn their dead. We could learn plenty from them. These trophy hunters make me wonder who the real beast is.’

One photo shows a man, who Carrey himself said was Trump, outfitted in a fuzzy blue robe and ready to dig into a bowl with two scoops of ice cream plus whipped cream and cherries on top.

The photo is a clear reference to a TIME Magazine interview that revealed Trump always enjoys two scoops of ice cream while everyone else at the dinner table only gets one.

‘Dear Smithsonian National Portrait Gallery @NPG, I know it’s early but I’d like to submit this as the official portrait of our 45th President, Donald J. Trump,’ Carrey tweeted on Thursday.

‘It’s called, ‘You Scream. I Scream. Will We Ever Stop Screaming?’ 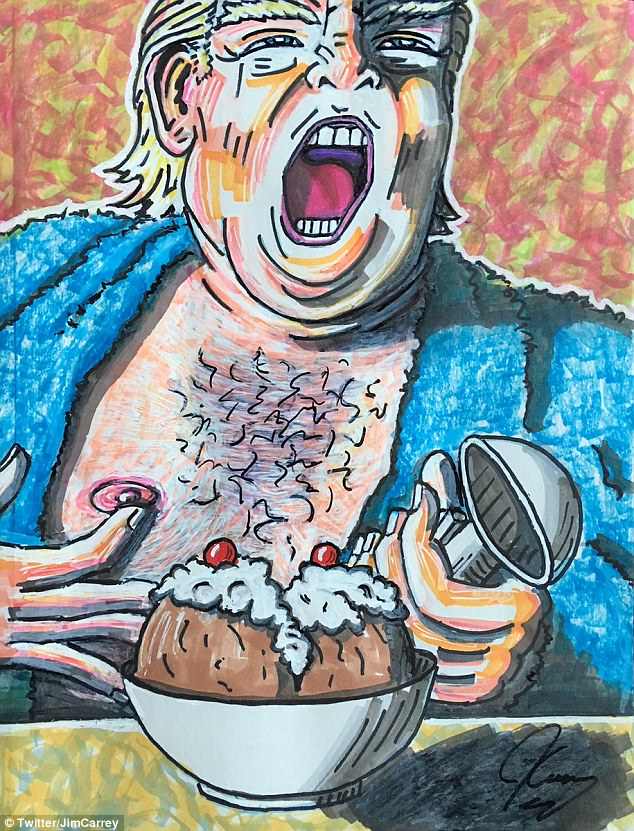 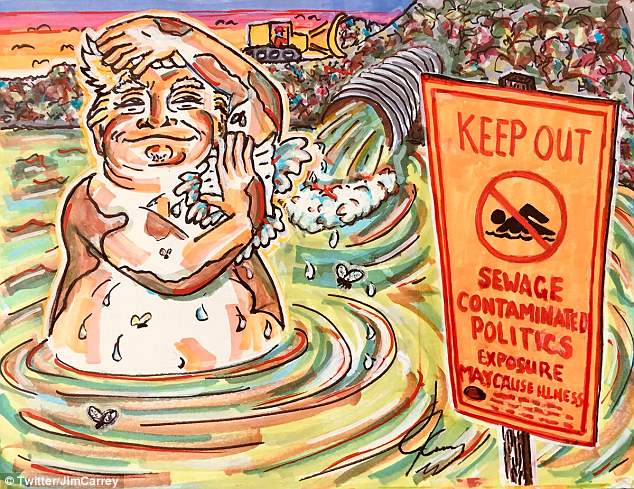 And yet another new photo shows Trump washing himself in a sewer, next to a sign that reads ‘Keep Out, Sewage Contaminated Politics’

Another photo shows Trump washing himself in a sewer, next to a sign that reads ‘Keep Out, Sewage Contaminated Politics’.

The painting was accompanied by a tweet from Carrey asking if anyone had watched 60 minutes on Sunday.

But instead of talking about the infamous Stormy Daniels interview, Carrey said he was struck by a piece on NBA player Giannis Antetokounmpo.

‘America still has some magic,’ Carrey wrote. ‘Pity you have to wade through so much cultural sewage to find it.’ 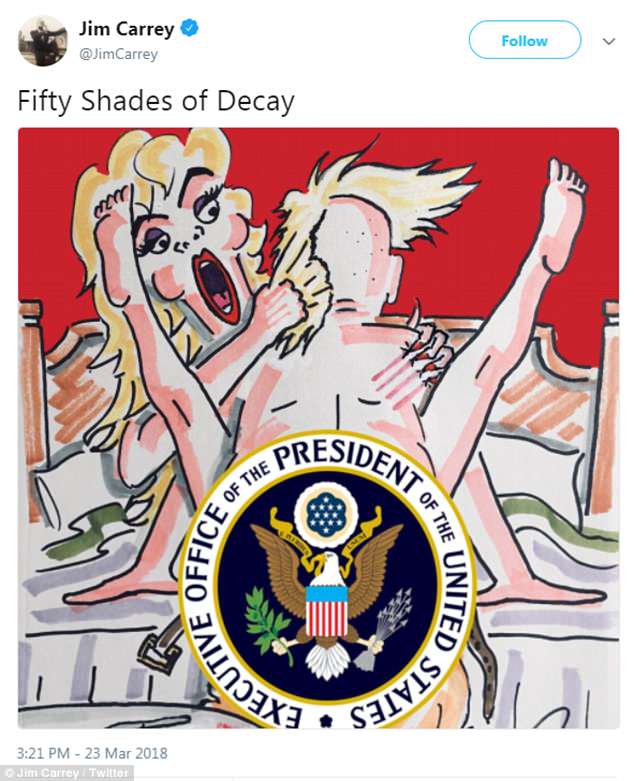 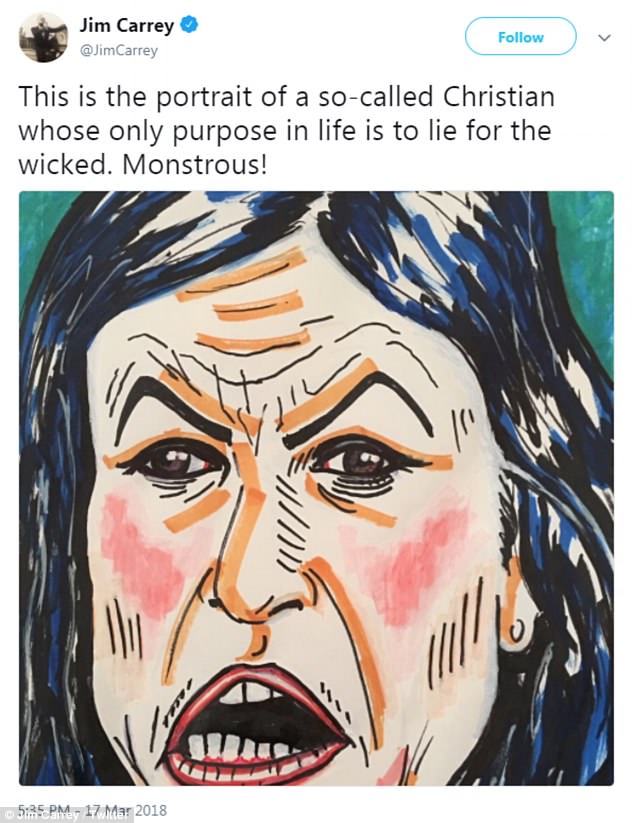 Last week Carrey revealed a portrait of Trump in bed with Daniels, painting the pair splayed naked on a bed with a presidential seal covering their modesty.

Carrey has attacked not only Trump with his paintings, but his cabinet members as well. 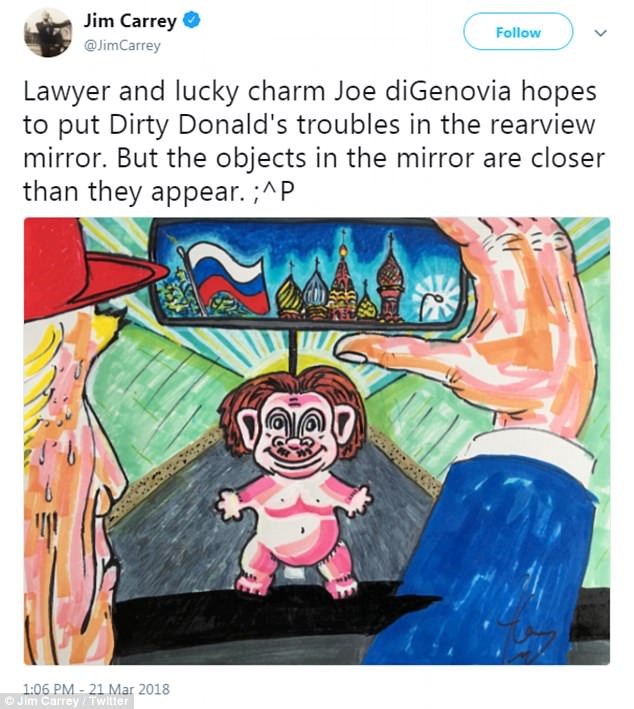 The actor regularly posts his art work on Twitter, which often follow political themes such as this image of Trump driving with Russia in the rear view mirror 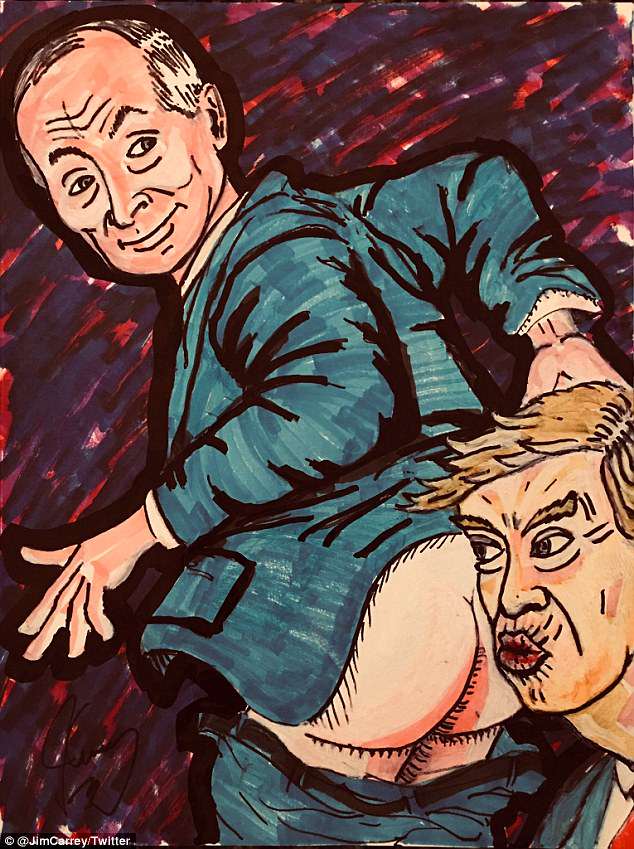 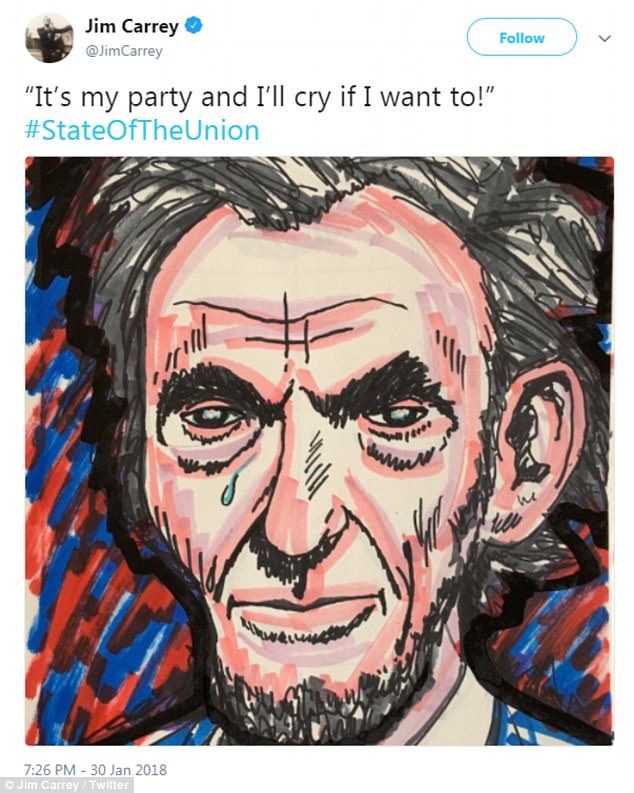 In the piece an angry Sanders, 35, is pictured with her cheeks flush and her brow furrowed.

Although he did not name her he captioned his piece saying: ‘This is the portrait of a so-called Christian whose only purpose in life is to lie for the wicked. Monstrous!’

His Twitter feed is filled with political paintings that often mock Trump, his cabinet, and Putin.

In a 2017 documentary I Needed Color, Carrey revealed his passion for painting and art which he used as a crux to ‘heal a broken heart’.