During the episode, the 38-year-old former Real Housewives Of Orange County star claimed that the 52-year-old former baseball star didn’t bother to invite their three children to his wedding to Kortnie O’Connor in Italy’s Lake Como late last month.

In a statement to People, a representative for Jim described his ex-wife’s comments as ‘constant harassment’ and said they were ‘both disgraceful and pathetic at the same time.’

Striking back: Jim Edmonds lashed out at ex-wife Meghan King following Tuesday’s episode of her podcast Intimate Knowledge, calling her comments ‘disgraceful and pathetic’ after she claimed that he didn’t invite their kids to his Italian wedding; seen October 2021

On her podcast, which featured guest Heather McDonald, Meghan said the Italian wedding was ‘very small,’ and surprisingly took place on her birthday, September 26.

She was complimentary toward Kortnie, saying that the bride’s dress was ‘beautiful,’ and she said that ‘hopefully’ their marriage ‘will last,’ unlike his three previous marriages.

However, Meghan included a jab at her ex when she said it was ‘interesting that he had a nanny there, but none of his seven children.

‘There was no kids to nanny at the wedding!’ she said. 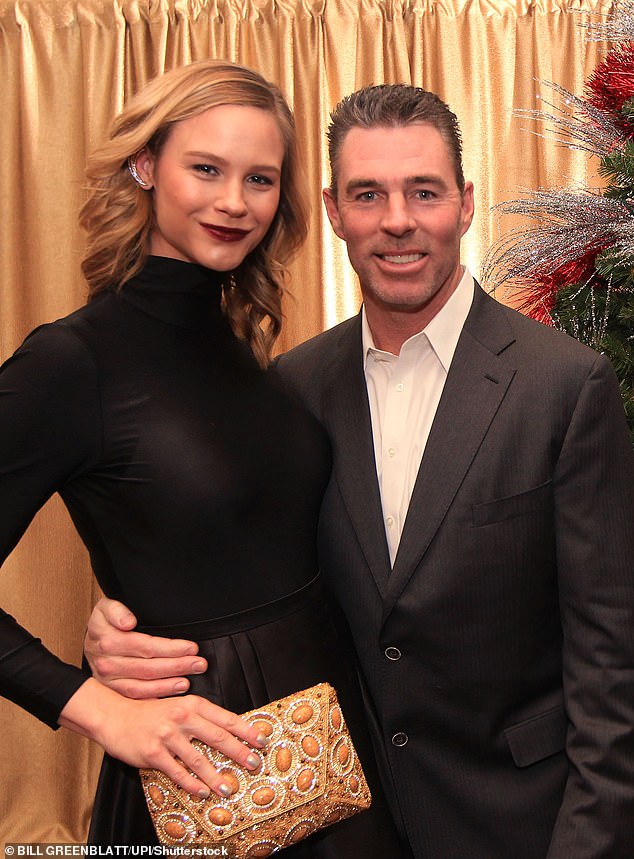 Meghan included a jab at her ex when she said it was ‘interesting that he had a nanny there, but none of his seven children.’ She said daughter Aspen, five, and twin sons Hayes and Hart, four, ‘weren’t even invited, as far as I know’; seen in 2016 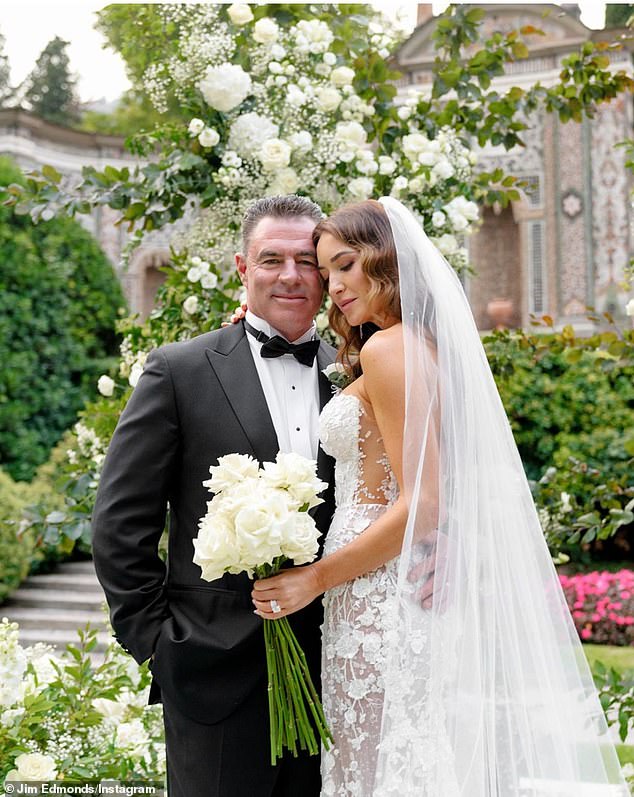 Meghan said that their daughter Aspen, five, and their twin sons Hayes and Hart, four, ‘weren’t even invited, as far as I know. They don’t even have passports and he didn’t ask me to get them a passport.’

In the statement via his representative, Edmonds blasted the former reality star’s comments.

‘Meghan continues to keep herself in the public eye by disparaging Jim, and then complains to anyone who will listen that coparenting is difficult,’ they said. ‘Meghan needs to focus on getting the help she needs to lead a productive and meaningful life.’

Notably, the statement did not directly contradict Meghan’s claim that their children weren’t invited to the Italian wedding, or offer any reason why they didn’t attend. 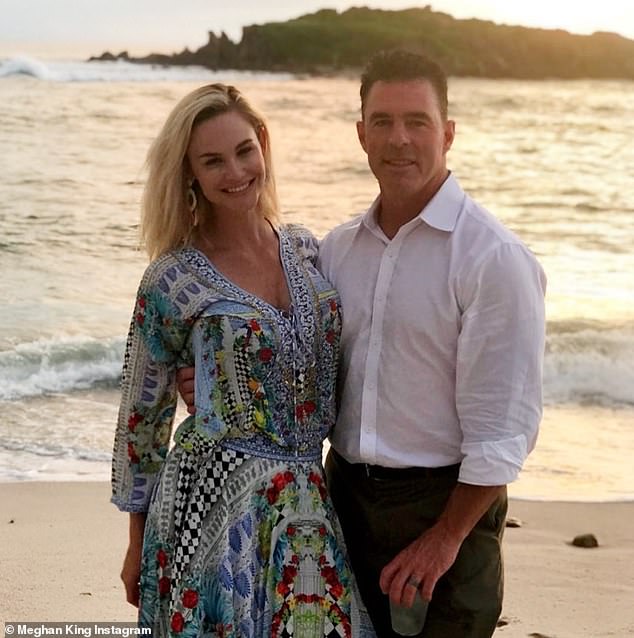 Furious: ‘Meghan continues to keep herself in the public eye by disparaging Jim, and then complains to anyone who will listen that coparenting is difficult,’ Jim’s rep said without providing any evidence that Meghan was incorrect

Elsewhere in her podcast, Meghan shared that she and Jim now have a frosty relationship in which they no longer communicate with each other.

However, she claimed that it could previously be fiery when explaining why she go a temporary restraining order against him in June of this year.

In court documents previously obtained by People, Meghan claimed that she ‘had to endure frequent and consistent verbal abuse’ from the retired athlete.

She claimed that he violated their ‘parenting plan’ by being verbally abusive to her both via digital means like text messages, and even in person, sometimes ‘in the presence of minor children.’

On her podcast, Meghan explained that a compromise made the restraining order a ‘consent order,’ which also makes demands on her conduct.

‘We ended up turning it into a consent order that has all of the same terms as a restraining order but now it’s reciprocal, so I have to follow it as well,’ she explained. 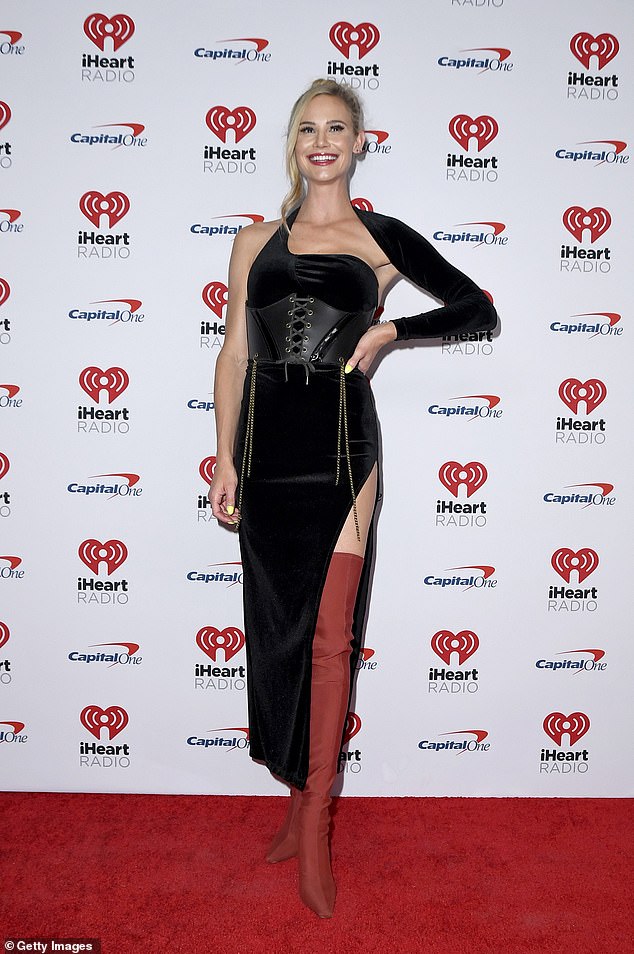 Equal: Meghan also revealed that a restraining order filed against her ex for verbal abuse was changed to a ‘consent order,’ which holds her to the same standards; seen September 23

‘I follow the rules so whatever, it doesn’t make any difference to me,’ she claimed, adding, ‘It’s good for Jim and I because we don’t have to see each other or communicate except about the kids, which is nice.’

Meghan said the mutual order had significantly improved her relationship with Jim, as he had allegedly let their disagreements spill over into communications with their children’s school.

Prior to the order, she claimed he had sent ‘some nasty messages,’ but in one particularly mortifying instance, he ‘replied all to my son’s class and said that I suck.’

‘He replied all to my son’s class, a big, huge email for a parent–teacher sign up sheet, and said “You all can see how much my ex-wife sucks,”‘ she said.

Luckily, some of the parents included in the email thread sent her messages of support, though she didn’t even know who they were because her children had just recently started attending the school.

The couple originally separated in October 2019, five years after getting married, in the wake of cheating rumors that dogged Jim. They finalized their divorce in May 2021. 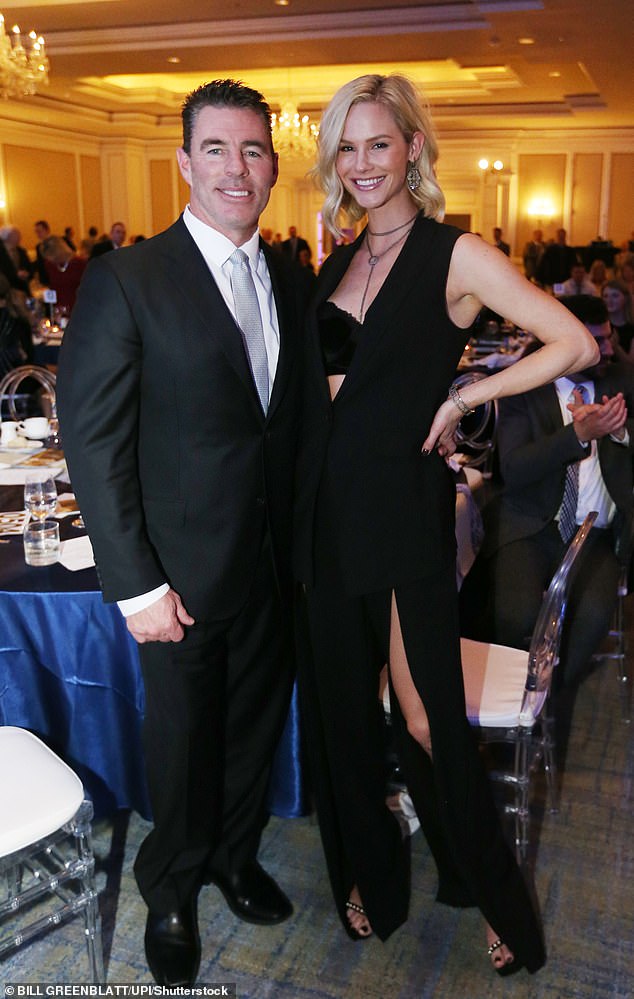 Childish: Prior to the order, she claimed he had sent ‘some nasty messages,’ but in one particularly mortifying instance, he ‘replied all to my son’s class and said that I suck’; seen in 2018