Jim Lynskey has been fitted with a battery-operated heart

A 22-year-old man is the youngest person in the UK to be fitted with a battery-operated heart, which he has to charge every night by ‘plugging himself’ into the mains through a hole in his torso.

Jim Lynskey, from Redditch, Worcestershire, has an enlarged heart, known as dilated cardiomyopathy, after he and his twin sister, Grace, caught viral meningitis at just two weeks old.

Mr Lynskey, who is one of around 100 people in the UK to be fitted with the device, has to carry two large battery packs, each lasting around eight hours, a small computer device and spare equipment with him at all times.

The device keeps the weak left side of his heart pumping, with an alarm sounding if it fails and an ambulance needs to be called.

He was fitted with the appliance after suffering three life-threatening cardiac arrests, however, the device makes it more complicated for him to have a heart transplant.

Mr Lynskey, who studies food and consumer management at Sheffield University, is still optimistic he may have a transplant in the future and is speaking out to encourage people to join the organ-donation list. 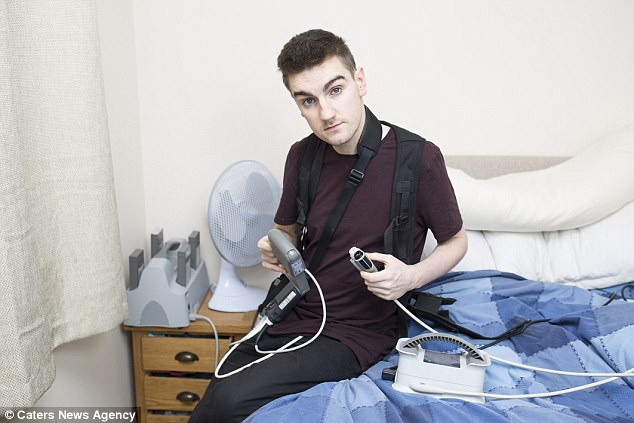 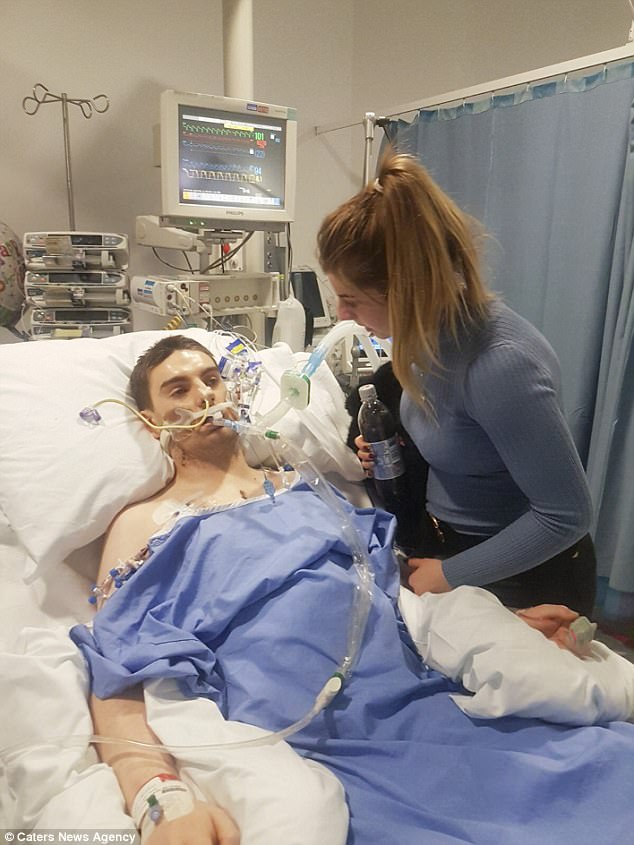 ‘I have to plug myself into the mains’

Mr Lynskey, who is on a priority service with his electrical suppliers in case of a power cut, said: ‘I have to plug myself into the mains electric at night whilst another machine charges the batteries.

‘Having a shower can be tricky and I have to seal the batteries in a watertight bag.

‘I always tend to avoid staying anywhere else overnight as it means taking all the equipment with me in a suitcase.’

Although the device could be life-saving, it makes receiving a heart transplant more complicated.

Mr Lynskey said: ‘Having only just undergone open-heart surgery I will need to be fully recovered before being considered for a heart transplant.

‘I will probably go back onto the organ donation list in about two months, but the idea of a transplant is quite scary, if it doesn’t work then there is nowhere to go from there.

‘That thought is always on my mind as the surgery is so risky.’

Mr Lynskey is backing the Save9lives campaign, based on the fact that each person who signs up to the organ-donation list could potentially save the lives of nine people.

He said: ‘I’m just so grateful to be alive, whether that is with the pump or with a heart transplant.

‘I’m doing talks at festivals and schools about the importance of organ donation and have started planning a few fundraising events.

‘I understand for some people it can be a very difficult subject and something I never thought about until I needed a new heart as it can be quite depressing.

‘It’s a tragic waste when three people are dying every day because they can’t be matched with a donor.’ 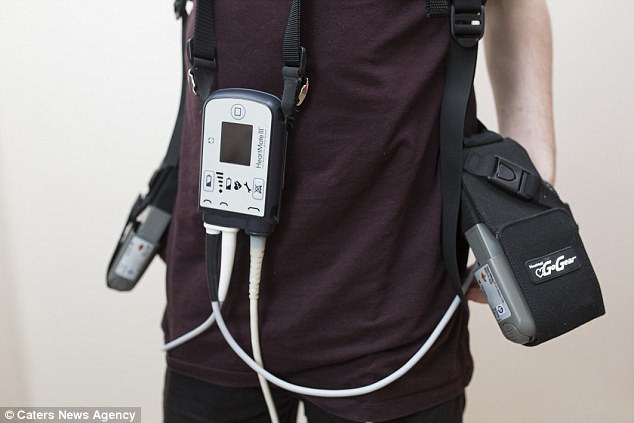 He has to carry two large battery packs, a computer and spare equipment with him at all times 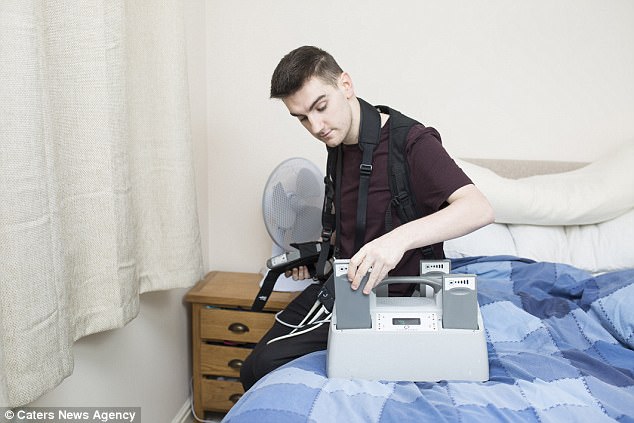 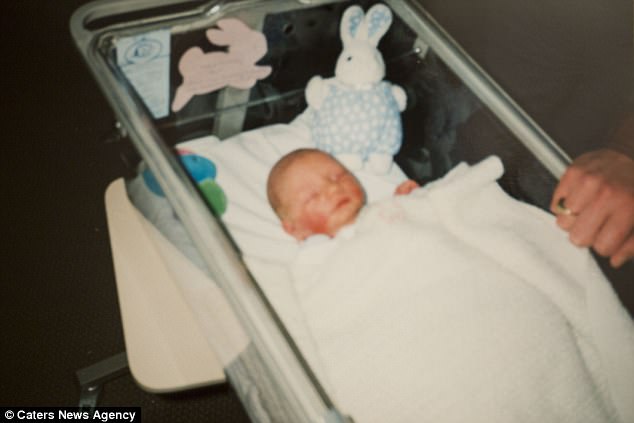 ‘I knew something very bad was happening’

Mr Lynskey, who was not expected to live beyond his teenage years, had a normal life until he was eight years old when the lower part of his heart started beating abnormally fast, known as ventricular tachycardiaor (VT), leading to him being resuscitated from two consecutive cardiac arrests.

He said: ‘I had never experienced anything like that before and I was so young, it was very frightening.

‘I knew something very bad was happening.’

Mr Lynskey underwent ablation, which involves removing scar tissue caused by the enlarged heart, and was fitted with a device that sets the organ’s pace, known as an implantable cardioverter defibrillator.

Yet, nine years later, 17-year-old Mr Lynskey went into VT again for seven hours while playing football and had to be resuscitated for the second time. A month later in February 2015 he was fitted with a mechanical pump that supports heart flow, known as a Ventricular Assist Device.

Although the device was meant to be failsafe, in October last year it started to break down and Mr Lynskey was rushed to Queen Elizabeth Hospital, Birmingham, where he was fitted with a battery-operated heart device. 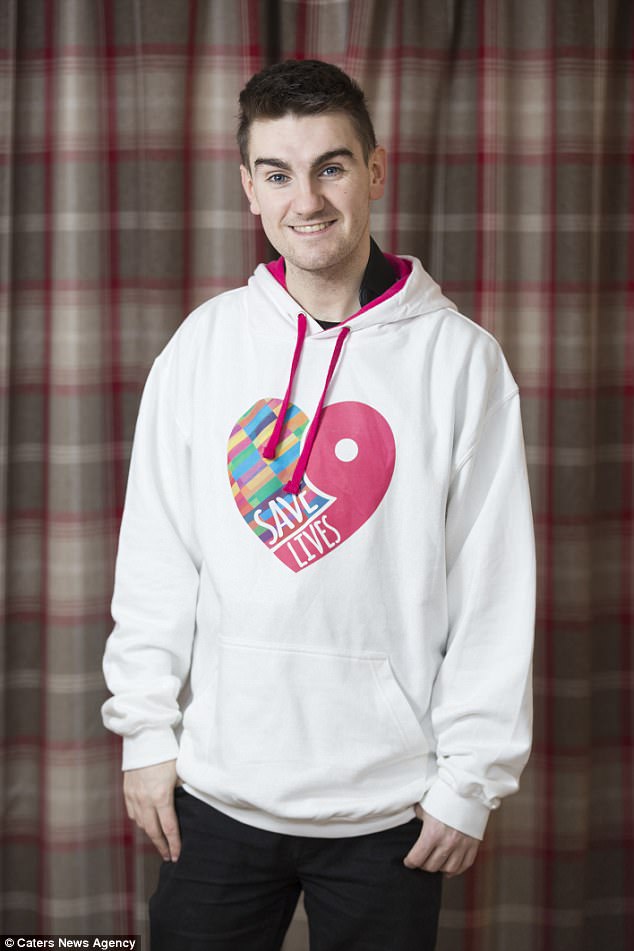 He is backing the Save9lives campaign, based on the fact that each person who signs up to the organ-donation list could potentially save the lives of nine different people 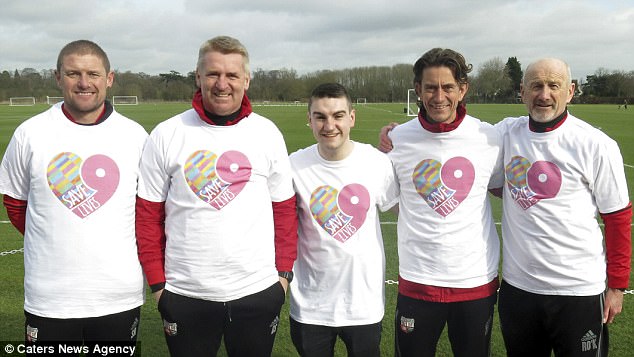