Jimmy Carter warns Democrats to stay away from impeachment in midterms

A poll on Tuesday flashed red for President Trump as more than four in 10 Americans said he should be removed from office.

The calls for his impeachment, as surveyed in an Axios poll, have not reached fever-pitch level, though – just 49 percent of Independents and 44 percent of all voters say Trump should be charged with high crimes and misdemeanors.

Democrats like ex-President Jimmy Carter are warning the party to ease off the topic.

Carter told Fox Business, ‘Not me, I don’t talk about impeachment, I think that’s the wrong thing for Democrats to do.’

Axios’ poll, which the news website conducted via SurveyMokey, gave Trump the support of a slim majority, 51 percent, where impeachment is concerned.

Another 46 percent said they did not believe that his campaign colluded with Russia to interfere in the 2016 presidential election.

Nearly two-thirds of voters, 64 percent, say they believe his ex-attorney, Michael Cohen, over the president, however, when he says that Trump ‘directed’ him to commit crimes on his behalf.

Trump says he found out about the deals ‘later’ and did not commit any crimes.

Just 31 percent of voters polled by Axios said they believe him. Even 38 percent of Republicans sided with Cohen.

Some Democrats have been tempted to bank November’s midterms on the president’s alleged crimes and possibility of impeachment — an outcome they could achieve if Republicans lose control of the House and they’re able to convince two-thirds of the Senate to convict him.

It’s a fairly high bar in the upper chamber to remove a sitting president from office, but Republicans such as House Intelligence Chair Devin Nunes are cautioning GOP voters not to be complacent this fall because it’s absolutely possible.

House Majority Leader Kevin McCarthy is also warning that Democrats will make impeaching President Trump one of their priorities if they capture the House.

McCarthy, the California Republican who is vying to succeed Rep. Paul Ryan as speaker, raised the impeachment issue in a Sunday appearance on ‘Fox News,’ after a week that featured the conviction of Trump’s ex-campaign chairman, Paul Manafort, the guilty plea by his longtime lawyer, Cohen.

McCarthy brought up the push by some Democrats to abolish Immigration and Customs Enforcement, an issue Trump also highlights at his campaign rallies.

‘The other thing they want to do is impeach this president,’ McCarthy said. 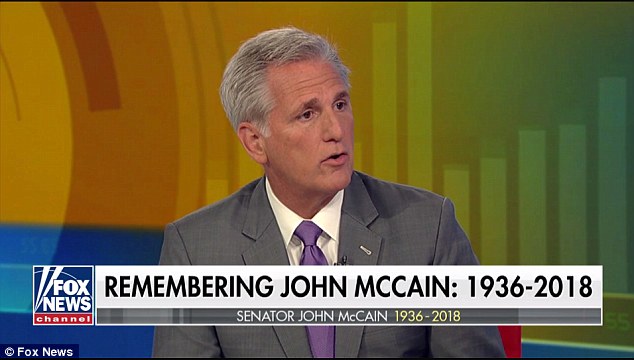 House Majority Leader Kevin McCarthy, a California Republicans, is warning that Democrats will make impeaching President Trump one of their priorities if they capture the House. 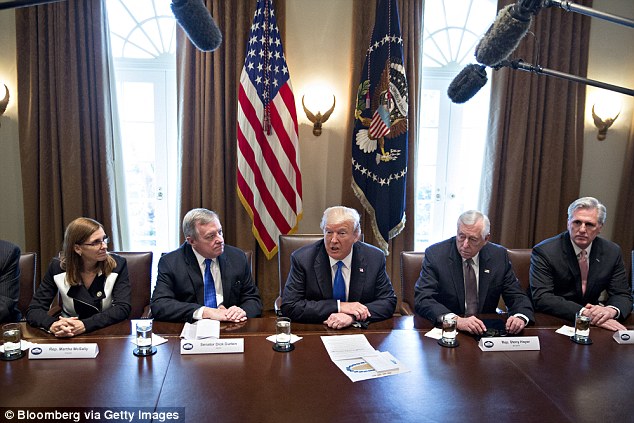 ‘They voted on it twice already forced the vote to the floor. [Billionaire activist] Tom Steyer spent more than $30 million and he brags that his list is bigger than the NRA list on impeaching this president,’ McCarthy told host Maria Bartiromo on ‘Sunday Morning Futures.’

McCarthy would be minority leader if Democrats succeed in taking control. If the GOP hangs on, he will be challenged by Rep. Jim Jordan of Ohio for the top post.

Talk of impeachment came after leaked document showed the raft of oversight investigations Republicans fear Democrats will jump-start – from probing Trump’s tax returns to the Constitution’s ’emoluments’ clause and Trump family members like son-in-law Jared Kushner, according to an Axios report.

Democrats hold an eight-point lead in a recent ‘generic’ congressional poll by NBC that asked whether respondents favored one party of the other.

Historically, the midterm elections are also leaning their way.

McCarthy’s statement is the latest instance of the GOP – rather than Democrats vying for control – raising the impeachment issue to drive up turn out among their own base.

House Minority Leader Nancy Pelosi cautioned last week against any rush to impeach based on the current state of the Mueller probe. 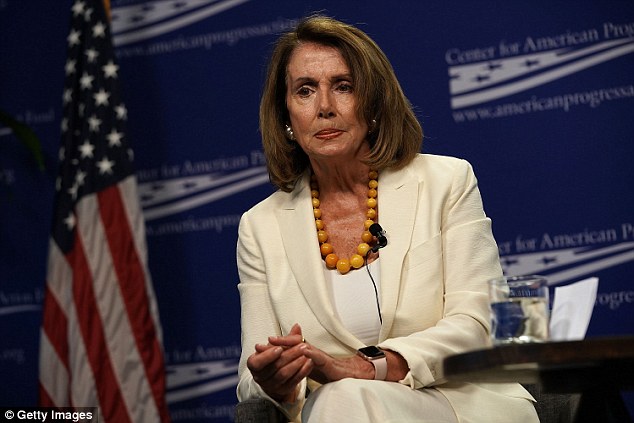 ‘It’s not a priority on the agenda going forward unless something else comes forward,’ House minority leader Nancy Pelosi said of impeachment 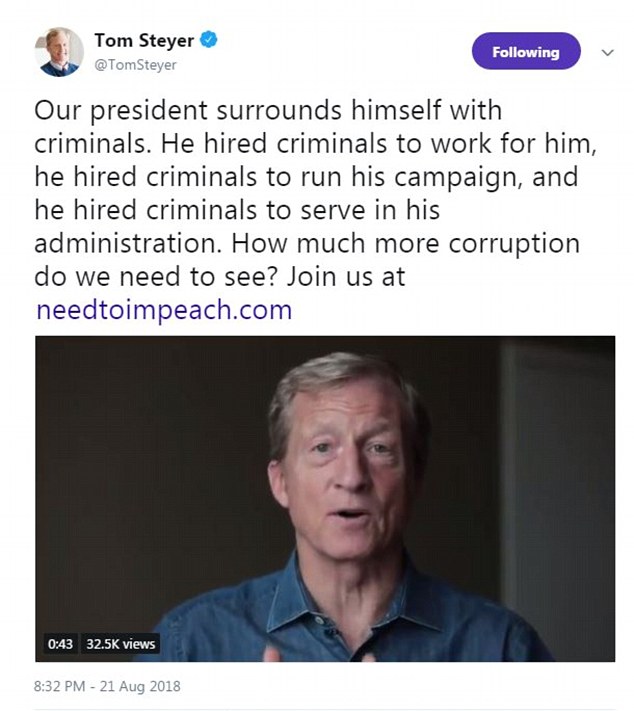 ‘Impeachment has to spring from something else,’ she said, hours after longtime Trump lawyer Michael Cohen pleaded guilty to eight charges and a Virginia jury found former Trump campaign chair Paul Manafort guilty of eight charges.

Pelosi, who would stand for speaker if Democrats retake the House but is facing pushback from some Democratic candidates, would oversee any impeachment that gets put forward.

On Wednesday it was the White House that elevated the issue when press secretary Sarah Sanders teed off on on Democrats, faulting them for a ‘sad attempt’ at ‘cheap political stunts.’

‘The idea of an impeachment is frankly a sad attempt by Democrats,’ she said. ‘It’s the only message they seem to have going into the midterms.’ 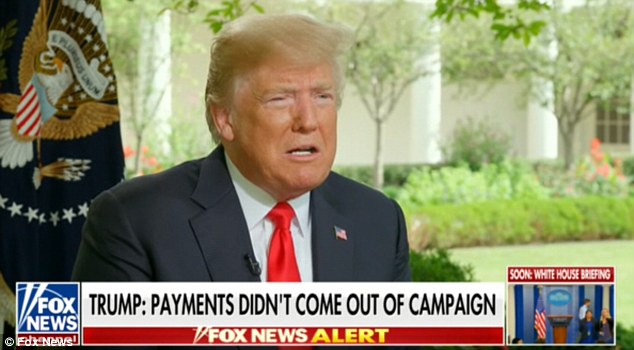 McCarthy on Sunday listed impeachment alongside immigration and health care.

‘First they are very clear they want to abolish ICE. So those MS-13 members that come across, those kids that have been trafficked that get stopped that ICE saves or what about the fentanyl that ICE saves in the process 167 voted present in the process,’ he said. Host Maria Bartiromo responded: ”Wow.’

Although some Democrats wand to abolish the agency linked to the Trump administration’s child separation policy, they aren’t in favor of stopping law enforcement at the border.

McCarthy continued: ‘And the last thing they want to do single payer healthcare, so 55% of Americans have healthcare through their employer. That would end, but the scary thing of this those who are on Medicare, you will end because they will bankrupt it before and put everybody into it and bankrupt Medicare,’ he said.

Former Virginia Republican Rep. Tom Davis, asked whether it now makes sense for Democrats to start talking about impeachment, told DailyMail.com after the Cohen plea and Manafort conviction: ”Not yet. It certainly lays a predicate.’

Democrats ‘have to ask themselves if this is 1998, where Republicans overplayed impeachment and lost seats, or 1974, where anger over Nixon and the pardon led to huge gains,’ said Davis, who previously ran the GOP House campaign arm and now runs government affairs at Deloitte.

‘The ominous weeks will tell, but Nancy Pelosi navigated 2006 successfully to lead to a House turnover and she knows if and when to pull the trigger. There is still a lot to play out and it’s August. Remember Access Hollywood?’ he concluded.