Jimmy Kimmel has surprised a couple who dropped their engagement ring in a lake during a proposal with a do-over – and a massive new diamond ring.

Seth Dixon was preparing to propose to the love of his life, Ruth Salas on a bridge in Loose Park in Kansas City, when disaster struck.

The $3,000 diamond engagement ring slipped out of his hand and landed in the lake below. And despite the valiant efforts of friend and family who dove in to try and find it, the ring had disappeared.

The moment was captured on video and almost immediately went viral, catching the attention of Kimmel who decided to set up a surprise for the pair.

Seth Dixon proposes to his fiance Ruth Salas on Jimmy Kimmel Live! after the host surprised the couple with the opportunity for a do-over, following their last disastrous attempt 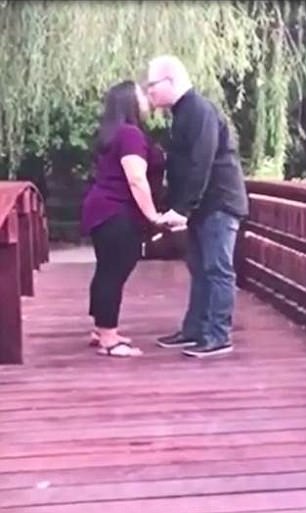 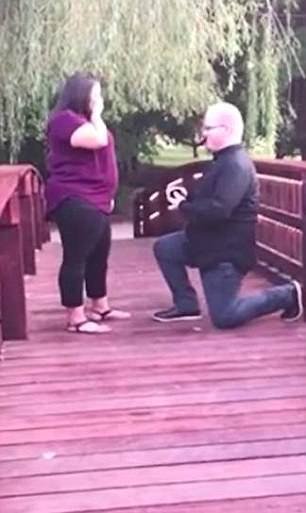 Dixon’s first proposal in Loose Park in Kansas City, ended in calamity after he dropped the engagement ring in the lake 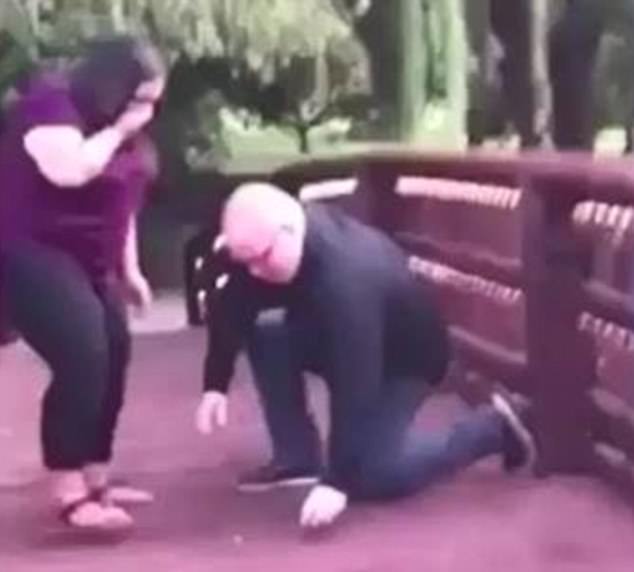 A viral video shows him desperately grabbing at the $3,000 diamond engagement ring before it dropped into the lake 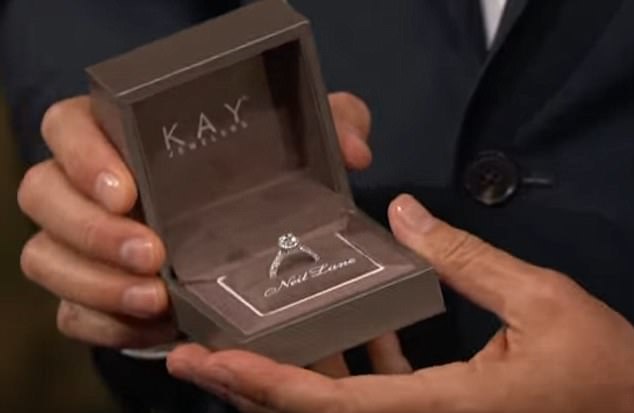 Uber driver Dixon and his fiancee Salas, a substitute teacher in Liberty, were told they were being flown out to LA for an interview with 20/20, and thought they were just being invited to sit in the audience for Kimmel.

So they were stunned when the talk show host called them up to the stage and revealed the whole thing had been a cleaver ruse to get them on his show.

But that wasn’t the end of the surprises for the couple. 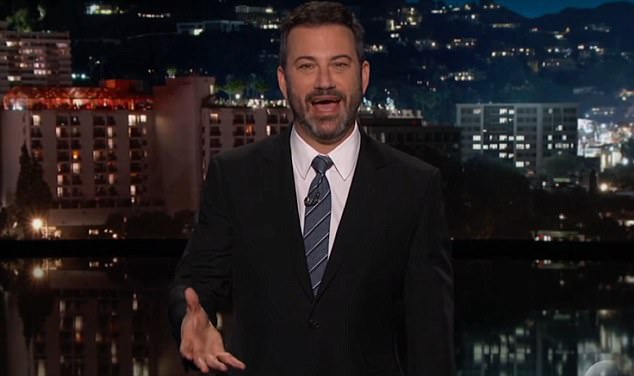 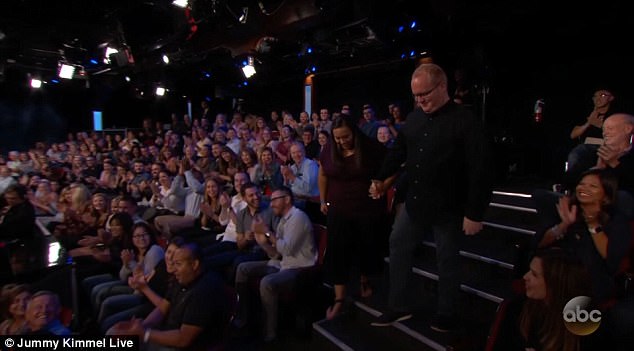 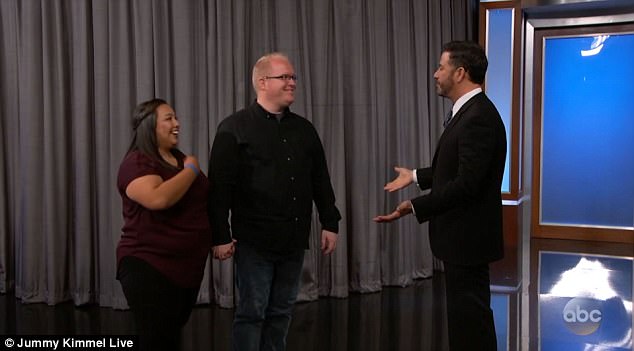 ‘I want to give you a do over, an ‘I do-over,’ Kimmel told the stunned couple on his show

Out walked jewelry designer Neil Lane – who provides the rings for the bachelor – who had a box containing an oval cut diamond ring surrounded by 100 smaller diamonds.

‘Is that as nice as the ring you lost?’ he asked.

There was an awkward pause before Salas replied, with a glance towards Dixon:’I mean…I’m pretty sure it’s a little bit more.’

At that point, Kimmel pulled back a curtain revealing a recreation of their proposal spot – a little wooden bridge with a parkland backdrop. 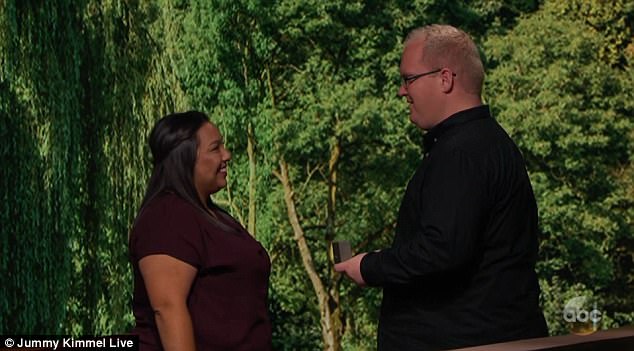 The stunned pair were provided with an oval cut diamond ring surrounded by 100 smaller diamonds, before a curtain was pulled back, revealing a knock up of their original proposal spot 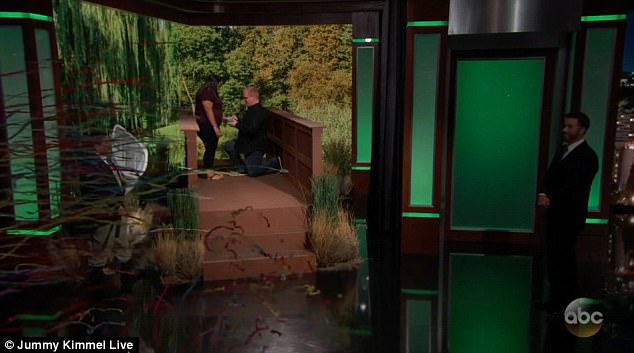 Getting down on one knee,Dixon  asked: ‘Will you marry me?’ and as Salas answered ‘Yes’ cascades of confetti fired out across the studio 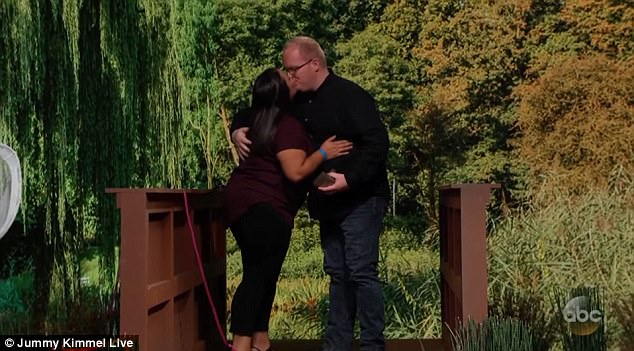 ‘Wow. Congratulations,’ Kimmel said as the couple shared a kiss on bridge

And this time, Kimmel has his sidekick Guillermo Rodriguez on hand armed with massive butterfly net, just in case.

‘We’ve been together for four years,’ Dixon told his fiance. ‘You’re the love of my life. We’ve had ups and downs, and we’ve gotten through it all. We know this day’s been coming for a long time. And I love you. I want to spend the rest of my life with you.’

Getting down on one knee, he asked: ‘Will you marry me?’

‘Yes,’ Salas replied to the cheers of the audience, before the couple shared a kiss.

‘Wow. Congratulations,’ Kimmel said, before joking to the audience. ‘And they’re inviting all of you to the wedding.’

The couple are due to get married next month, on October 21. 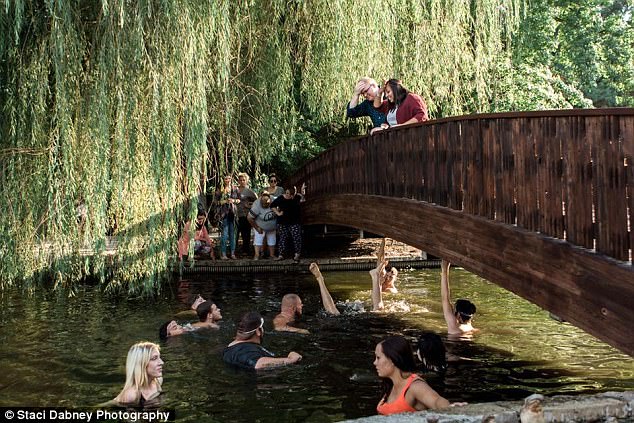 Dixon, an Uber driver who has been dating Ruth for four years said he was distraught when he first dropped the $3,000 ring that he is still making payments on.

He told theKansas City Star that the whole thing is ‘absolutely real’.

‘I wish it wasn’t’, Dixon added. Salas said that the pair both ‘freaked out’.

‘It ping-ponged from one plank to another. You could hear a little plop,’ she said.

The teacher said despite what happened she’s just ‘happy and excited that we’re finally engaged’.

‘Just sad I don’t have a ring to show for it,’ she admitted at the time.

Now, thanks to Kimmel, they have both a stunning ring, and an engagement story they’ll never forget. 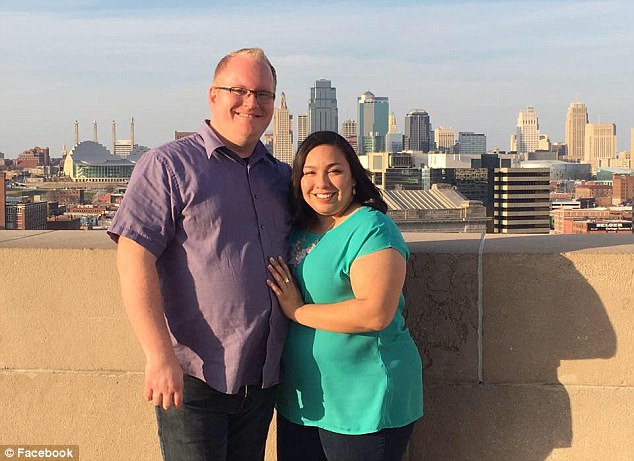 Dixon, an Uber driver who has been dating Ruth for four years said he was distraught when he first dropped the $3,000 ring that he is still making payments on but now they have an unforgettable proposal story 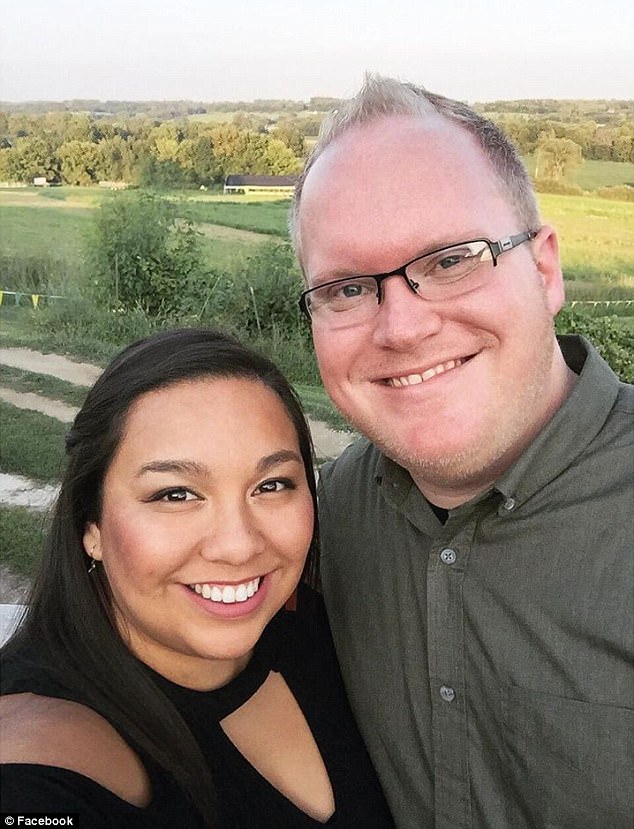 The couple (pictured on Facebook) are due to get married next month, on October 21