Jimmy Kimmel became the latest big name to weigh in on the scandal that ended TV show Roseanne as he opened his show on Tuesday night.

The host, who also works for ABC, opened his monologue by saying: ‘You’re not going to believe this but she tweeted something outrageous.’

‘I know. The President did it too. It’s crazy,’ Kimmel continued to laughter from the studio audience.

Jimmy Kimmel took on the Roseanne controversy on his show Tuesday night, saying: ‘You’re not going to believe this but she tweeted something outrageous’ 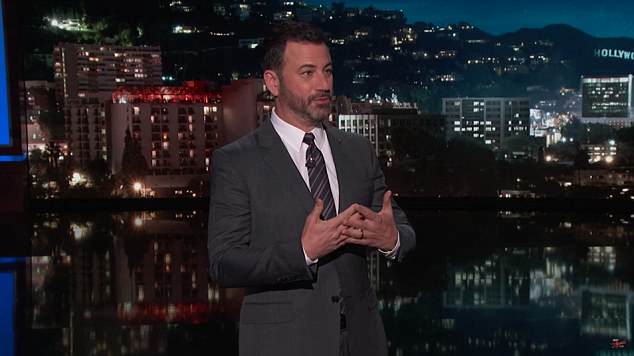 Kimmel said that losing Roseanne, which was the best-rated show on network ABC, would be a big blow before suggesting the program continue but with John Goodman in the lead role

Roseanne, the most popular show on TV, was dramatically pulled from the air on Tuesday after the show’s eponymous star was embroiled in a race row.

Roseanne Barr caused outrage when she tweeted that former Obama adviser Valerie Jarrett was the lovechild of the ‘Muslim Brotherhood and Planet of the Apes.’

‘ABC decided to cancel their highest-rated show following a tweet in which Roseanne compared and African American former adviser to President Obama to an ape, which did not sit well with ABC management or anyone with a brain.’

Kimmel then joked that the show’s demise would be a huge blow to ABC, saying ‘we don’t have much on this network.’

‘We’re hoping that the NBA Finals goes 11 games this year,’ he quipped.

Recalling the age-old showbiz saying that ‘the show must go on’, Kimmel proposed that the series be allowed to continue only with a different star. 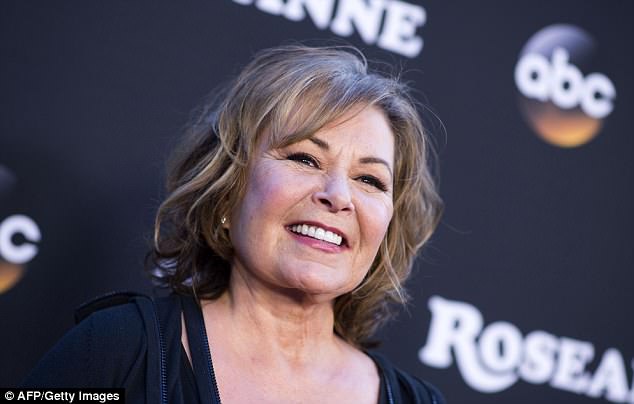 In the message, Barr used Jarrett’s initials while saying she was the lovechild of the ‘Muslim brotherhood and Planet of the Apes’

He suggested that John Goodman, who plays Roseanne’s husband, step into Barr’s shoes and that the show be renamed ‘Dan’ instead.

Kimmel then showed a spoof montage of the Dan show, using clips of Goodman’s character cursing and lamenting his bad luck.

Before its cancellation, the revamped Roseanne had been one of the most popular shows on US television and was once feted by President Trump.

In a speech to supporters, Trump said the show and its depiction of a largely white, working-class family with a conservative heroine, was ‘about us’.

But the White House refused to comment on Tuesday as the knives came out for Barr and the entertainment world turned its back on her.

ABC pulled Roseanne from the air as outrage from the tweet spread, saying the language was ‘abhorrent, repugnant and inconsistent with our values’

Barr offered several explanations for her words, including that she believed Jarrett was white and that she had been on medication Ambien at the time

Within hours of her tweet, ABC said it was pulling the revamped Roseanne, calling the comedian’s tweet ‘abhorrent, repugnant and inconsistent with out values.’

Barr was also dropped by her agent and saw re-runs of the original Roseanne also pulled from the air.

She did apologize to Jarrett, who was born in Iran to African-American parents, and vowed to remove herself from Twitter.

But hours later she was back and sharing often offensive content which supported her initial remark.

In an extraordinary series of tweets, Barr also blamed her remarks on sleeping pill Ambien and said she didn’t know Jarrett was black and believed she was ‘Jewish and Persian’ instead.