Jimmy Osmond has been rushed to hospital after suffering a stroke on stage while starring in a pantomime.

The former Osmonds star was appearing as Captain Hook during a performance of Peter Pan at the Birmingham Hippodrome when he suffered his second stroke in 15 years.

The 55-year-old will not be returning to work in the show, which concludes on January 27, a spokesperson has confirmed. 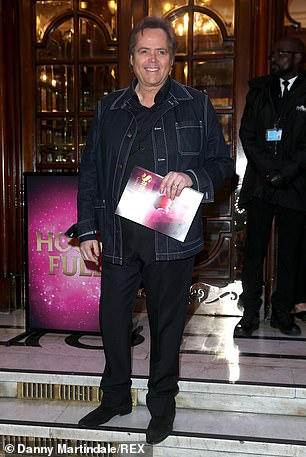 Jimmy Osmond (pictured, left, as Captain Hook and, right, on December 12 at the London Palladium for a Snow White performance) fell ill while he was playing the villain at the Hippodrome in Birmingham 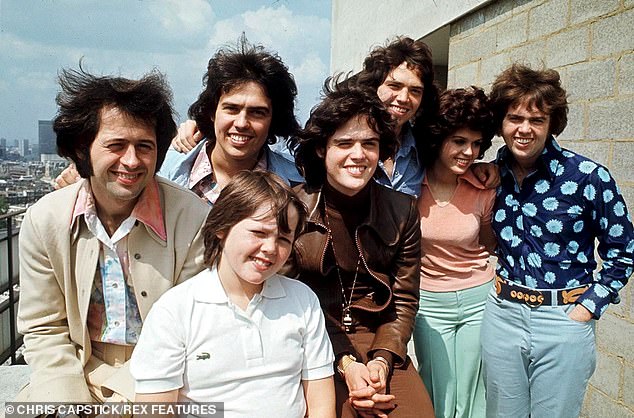 Jimmy (pictured, front, with his Osmond brothers) became the youngest singer to have a number one hit in the UK aged just nine 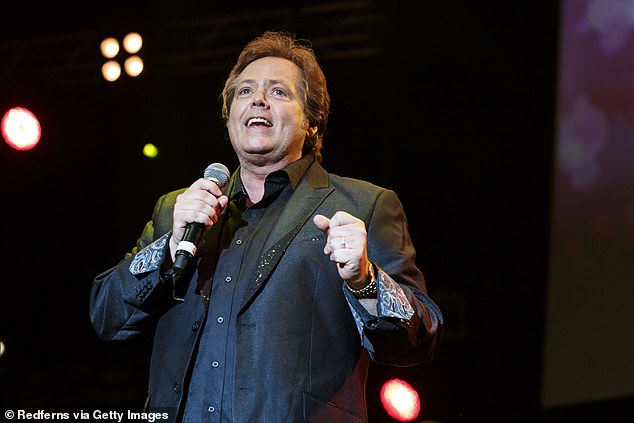 ‘On the evening of Thursday December 27 after pushing through the evening’s performance of Peter Pan at Birmingham Hippodrome, Jimmy Osmond was driven straight to hospital and diagnosed with a stroke,’ the spokesperson said. ‘He is grateful for all the well wishes and will be taking time out in the new year.’

Earlier this year Mr Osmond tweeted about his excitement over the festive role, writing: ‘Excited to be in panto again and returning to this role of Captain Hook I love letting my inner baddie out, especially in Birmingham at the hippodrome where I have so many memories!’

The part is being covered by Osmond’s understudy Luke Redford and Darren Day will take over from later this week.

‘Jimmy loved being a part of the Hippodrome’s well-renowned panto, and his portrayal of Captain Hook was both dastardly and heartwarming. He won the adoration not just of our audiences, but also of all our staff – we all send Jimmy and his family very best wishes for a speedy recovery.’

Osmond is the youngest member of the sibling musical group the Osmonds. He began performing when he was aged just three years old and by  nine he was the youngest artist to have had a number one in the UK with his hit ‘Long Haired Lover From Liverpool’.

He first suffered a stroke 15 years ago, when he discovered it was caused by a hole in his heart.

He had been in Missouri recording his TV show Jimmy Osmond’s American Jukebox when he was suddenly overcome with a blinding headache.

‘It came on so fast and I could hardly see – it was as if I had tunnel vision,’ he told Mail Online at the time. ‘Somehow, I managed to get to the end of the show. How I drove home I have no idea and I should not have done it because I couldn’t even see the lines in the middle of the road, but I was desperate to get back to my family and go to bed.

‘The following morning I tried to get up, but felt so dizzy that I fell over. My vision was still bad and this terrible headache was gnawing away right at the base of my skull.’

He thought it was a severe migraine but his wife drove him to the local hospital where doctors advised him to have a brain scan.

The tests revealed he had suffered a stroke caused when small clots break off, temporarily blocking the blood flow in small vessels, which leaves part of the brain without oxygen for a few minutes.

Doctors found Jimmy had what’s called a Patent Foramen Ovale (PFO) – a hole the size of a pound coin in his heart.

It was a birth defect but had gone undetected because Jimmy previously had no signs of possible heart problems.

‘My doctor explained that over time, tiny blood clots that he described as “particles” had travelled from my heart to my brain, forming a large clot, and this is what had caused the stroke.

‘He warned me that unless I had emergency surgery to close the hole then I was at risk of having another stroke.’

‘I remember being on the trolley saying goodbye to Michelle and the kids, then just before I went under the anaesthetic, a doctor came waving a liability form for me to sign, saying, “I have to tell you that this procedure could take your life”, which didn’t help matters at all.

‘The operation, which lasted about an hour, was straightforward but the recovery was painful. Afterwards I spent a week in hospital until I was fit and able to go home.’

Jimmy went on to play at the Genting Arena in Birmingham in 2017, part of his first solo tour of the UK in four years as he celebrated 50 years in showbusiness.

His mother Olive died in 2004 at the age of 79 from a massive stroke and it’s now thought it was caused by an undiagnosed hole in her heart.

As the defect was suspected to be genetic, Jimmy’s eight siblings, his children, nephews and nieces have all been checked.

Results have showed three of Jimmy’s brothers, two of his nephews and his daughter Bella all had the same condition.

They have all have operations except Bella, who was a baby at the time. Because she had such a tiny hole, doctors said it was best to let it close on its own, which it did.

‘I still cannot believe that I never had any symptoms as a child,’ Jimmy said. ‘Doctors say there are few, if any at all.’