Counting On star Jinger Duggar, 25, and her husband Jeremy Vuolo, 31, only moved to Los Angeles two months ago, but the couple has already gone full Hollywood.

On Thursday night, they went on a double date with some similarly famous friends, American Idol contestants Cade Foehner, 23, and Gabby Barrett, 19.

The group posed for pictures outside Grace Community Church in LA before heading to the the trendy ice cream shop Salt & Straw for a treat. 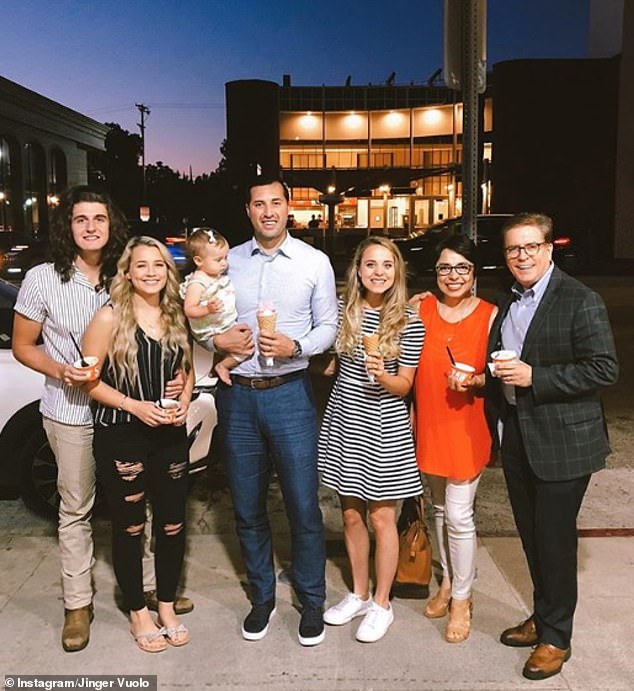 Talkin’ Jesus: The two couples were accompanied by a Grace Community church pastor and his wife

While Jinger’s family is incredibly conservative and has strict rules for relationships, modest dressing, and most other behavior, the 25-year-old seems to be increasingly pushing her boundaries since getting hitched — and moving first from Arkansas to Laredo, Texas, and now to the West Coast.

Whereas she grew up only wearing long skirts and dresses, on Thursday she was pictured in a trendy fit-and-flare dress that cinched at the waist and fell to a mid-thigh hem.

Growing up, Jinger’s mother Michelle ensured the girls always covered their knees, and she even insisted that TLC blur her own knees in an episode when she went water skiing — but Jinger doesn’t seem concerned about ‘defrauding’ men by showing off the risqué body part.

She paired her short, figure-flaunting dress with white sneakers and wore her hair — which she died from brunette to blonde ahead of her move — down around her shoulders.

Jeremy, meanwhile, was quite dressed up in a suit, and their one-year-old daughter Felicity wore a floral dress and an enormous blue bow on her head. 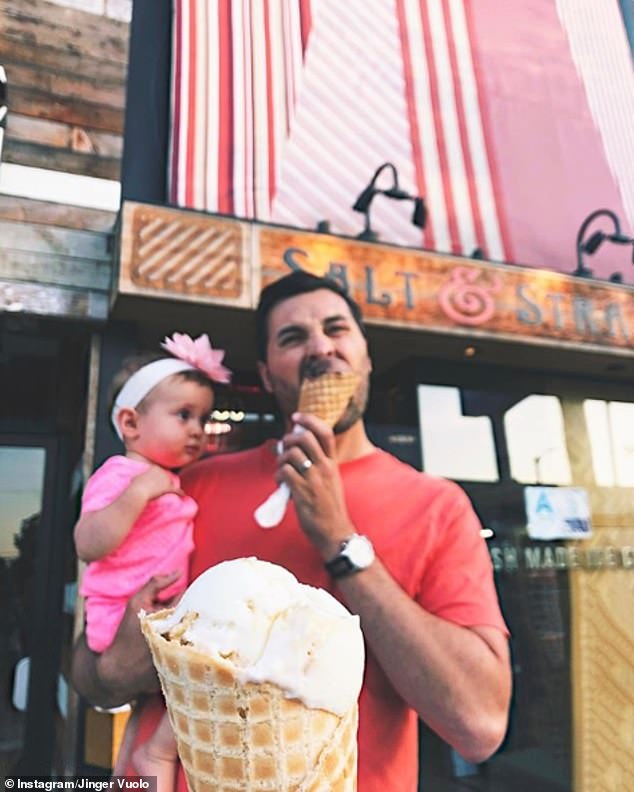 We all scream: They went for ice cream at the trendy shop Salt & Straw — which Jeremy and Jinger have visited before 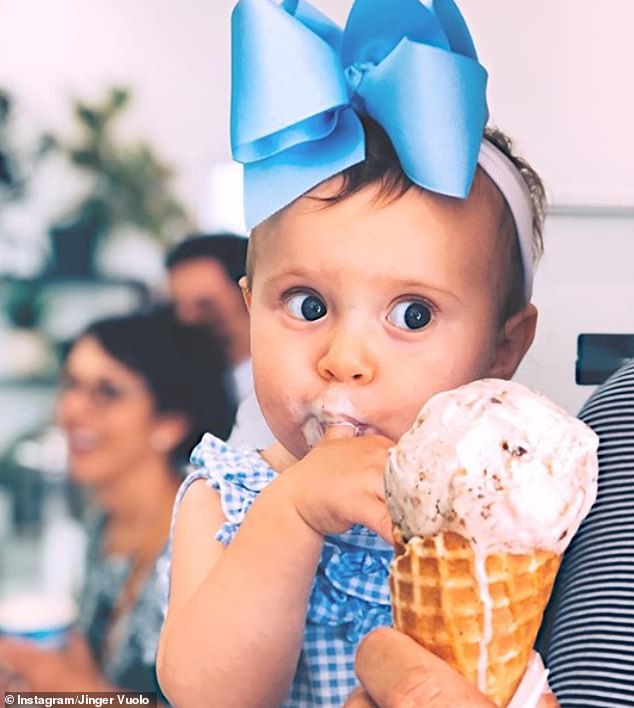 She likes big bows and she cannot lie! Felicity always comes along — and is almost always wearing a huge, gender-identifying bow on her little head 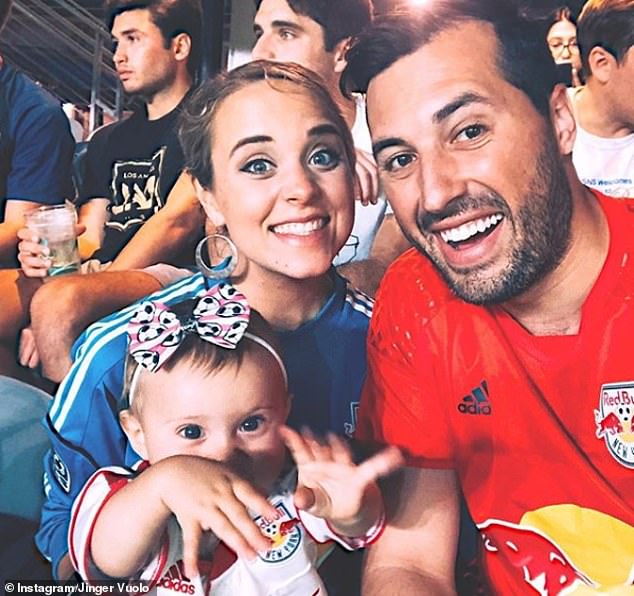 Natural smiles, everyone! The family has also hit up a few soccer games. Jeremy, who used to play professionally, has made a fan out of his wife 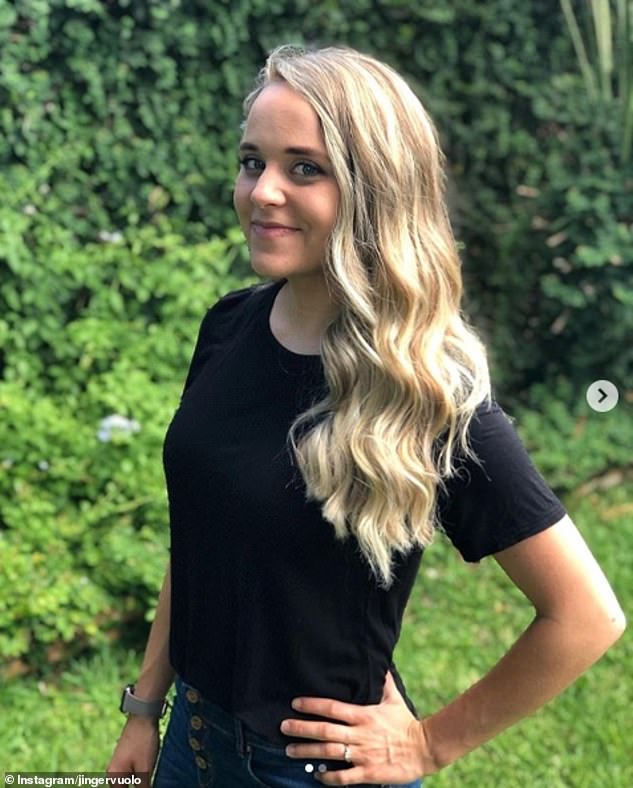 All about that LA look! Jinger dyed her formerly brunette locks blonde just before they moved to California a couple of months ago 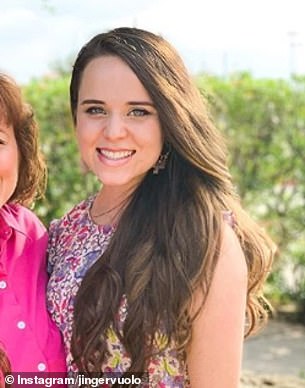 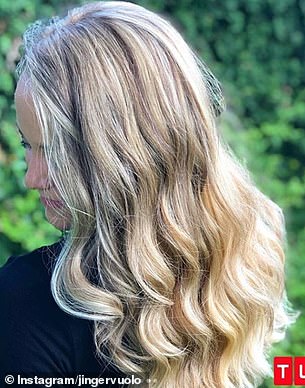 What a little rebel! The change was quite a surprise given that her sisters all tend to wear their hair the same way — and none have dramatically dyed their locks before

The two smiled alongside Cade, who has something of an ongoing bromance with Jeremy. Cade, a singer and guitar player, made it to the top five on season 16 of American Idol.

He recently announced his engagement to his fellow season 16 contestant Gabby, who placed third on the show and sings country music.

The group outing was actually a triple date with Michael Mahoney, the Pastor of Administration Grace Community Church, and his wife.

Cade and Gabby attend the church, while Jeremy is pursuing graduate studies at The Master’s Seminary there.

Since heading out to LA, Jeremy has posted plenty of photos from church, as well as one on his first day of class on August 5. 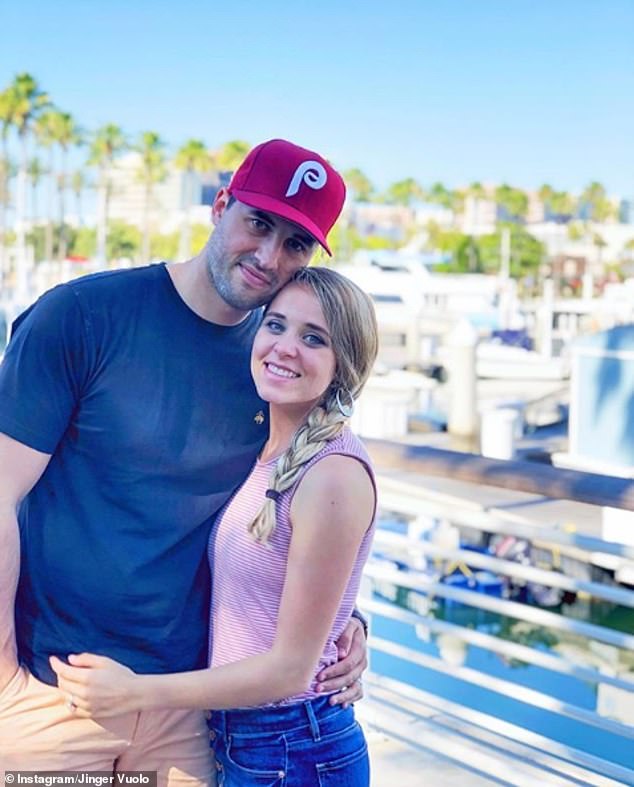 Showin’ some skin! Jinger is also loosing up the modesty standards of dressing she grew up with, and has been frequently seen in jeans and even sleeveless tops 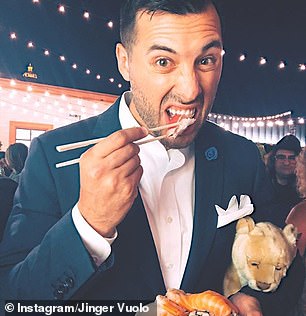 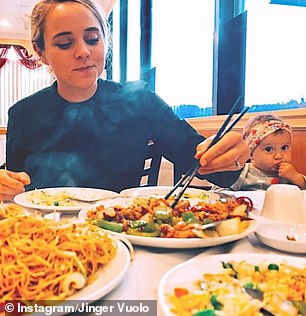 They don’t make it like this in Arkansas! They have really been taking in LA’s food options 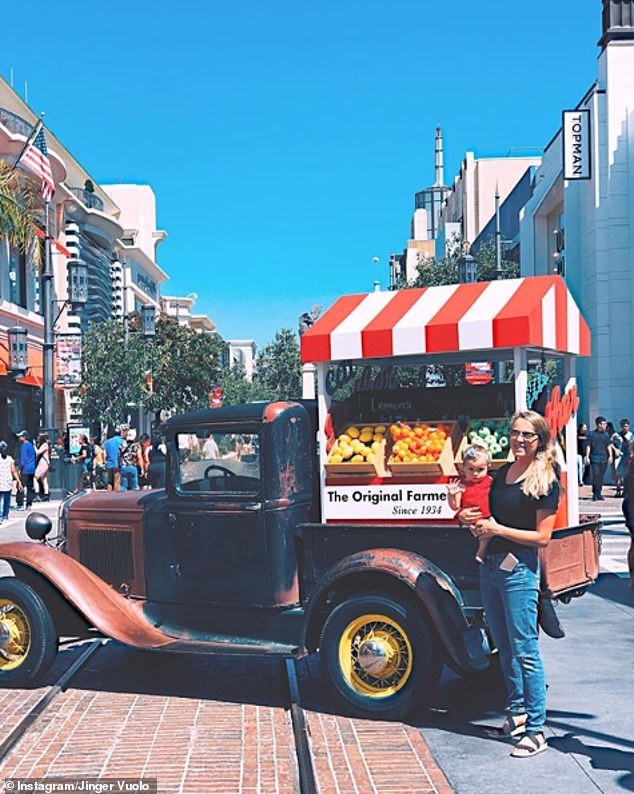 Where’s the paparazzi at? Jinger smiled for a picture at The Grove, a popular shopping spot where celebrities can sometimes be spotted 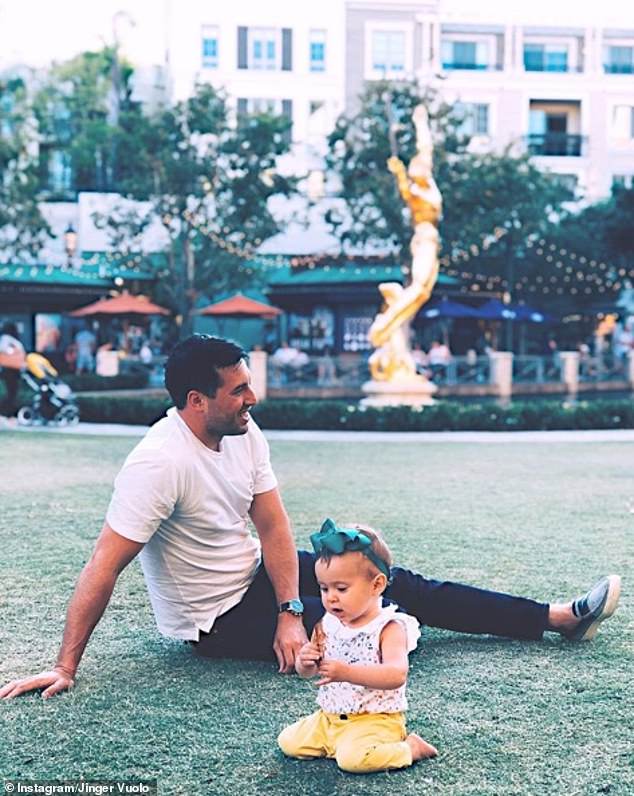 An influencer in the making? She’s posted plenty of curated shots of her time on the West Coast

But while he seems to be enjoying it, his school has had some problems as of late. According to Patheos, the Western Association of Schools and Colleges’ Senior College and University Commission placed his school on probation in August of last year.

The accreditor cited a ‘lack of leadership ethics and accountability’ which ‘was unmatched for members of this review team,’ as well as ‘a pervasive climate of fear, intimidation, bullying, and uncertainty.’

The commission also pointed to conflicts of interest for board members.

‘With many board members being so integrally tied to the president, the ability to independently evaluate the chief executive officer/president’s performance is hindered,’ the report read.

In October, evangelist John MacArthur — who serves as the head pastor of the church, and whom Jeremy has posed for photos with — announced that he would be stepping down as president of the University and Seminary. 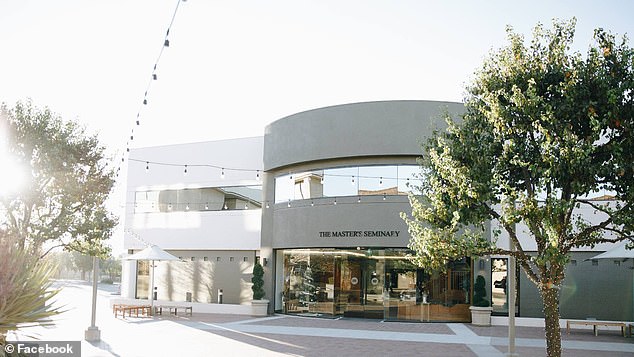 Uh-oh… Jeremy is attending the Master’s Seminary at Grace Community Church, which is currently on probation with the local accrediting commission 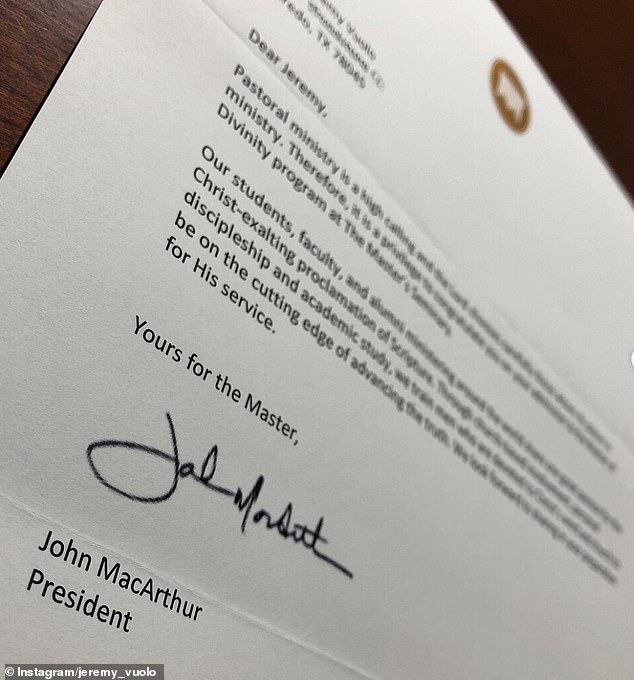 Planning: He shared his acceptance letter in May of last year, though he either put off his enrollment or had been attending remotely before they moved in June 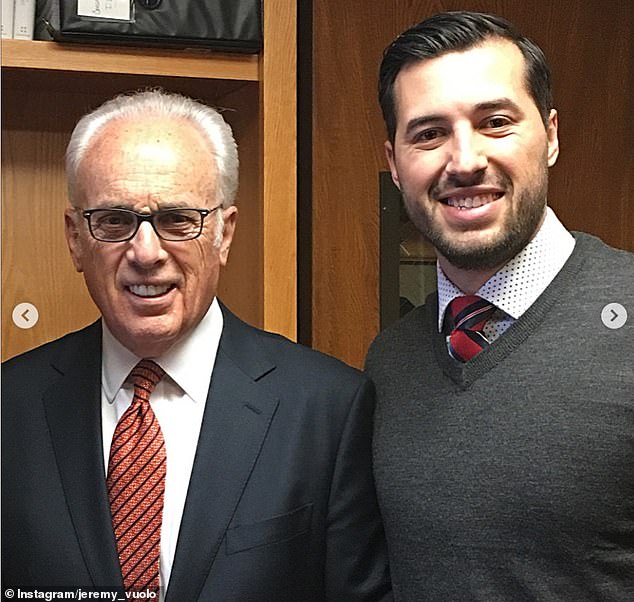 Big fan: Jeremy is pictured with evangelist John MacArthur, the head pastor of the church who announced he was stepping down as president of the school

The school is still on probation.

Jeremy, however, seems unconcerned, and he and Jinger have been doing their best to explore LA, embrace LA culture, and up their social media profile.

Together — and along with their daughter Felicity — they’ve attended several pro soccer games. (Jeremy is a former player.)

They’ve visited the celebrity-spotting shopping center The Grove, picked up coffee from trendy high-priced shops like Intelligentsia Coffee and Bluestone Lane, and noshed on sushi in Beverly Hills.

They’ve made stops at Griffith Observatory, Aquarium of the Pacific, The Americana at Brand shopping complex, and Chinatown.

In July, they even walked a red carpet, attending the premiere of Serengeti, which was made by TLC’s parent company Discovery. 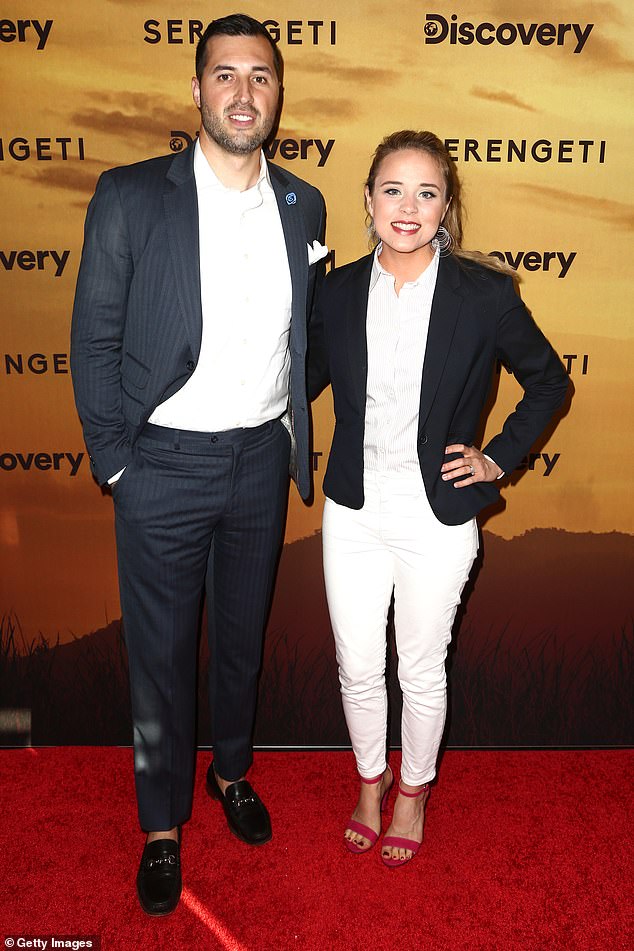 Superstars! In July, they even walked a red carpet, attending the premiere of Serengeti, which was made by TLC’s parent company Discovery 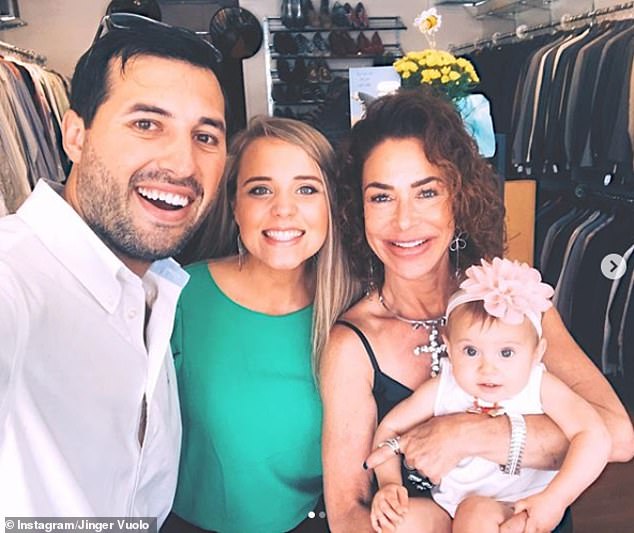 OMG, who’s this? The couple stopped by actress Claudia Wells’ clothing store and posed for pictures with the Back to the Future star 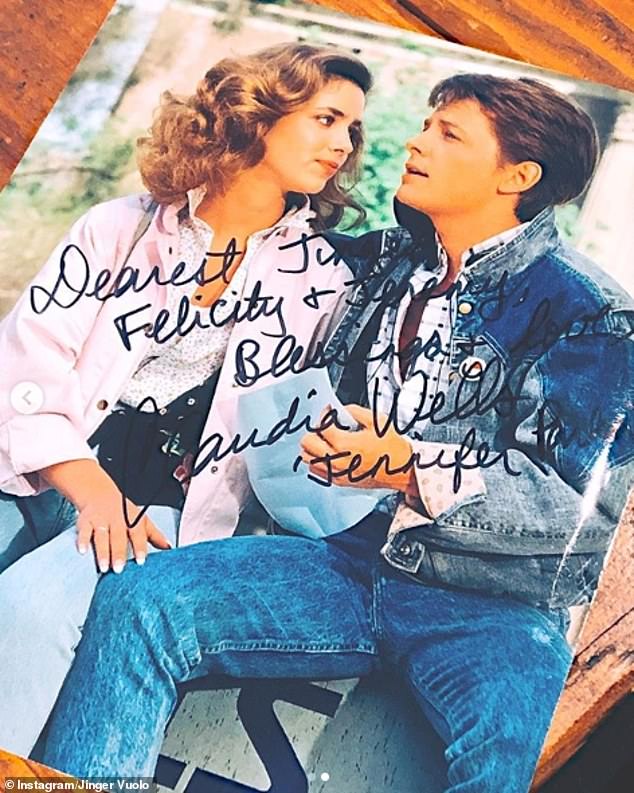 Time travel’s not in the Bible… They got an autograph, but Jinger may not have actually seen the movie. Growing up, her family didn’t have a TV and she could only watch Christian films 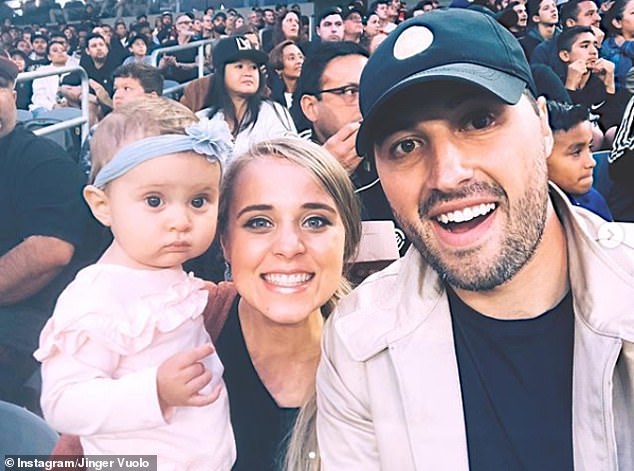 Signature smile: When she was a teenager, Jinger said she dreamed of moving to a city 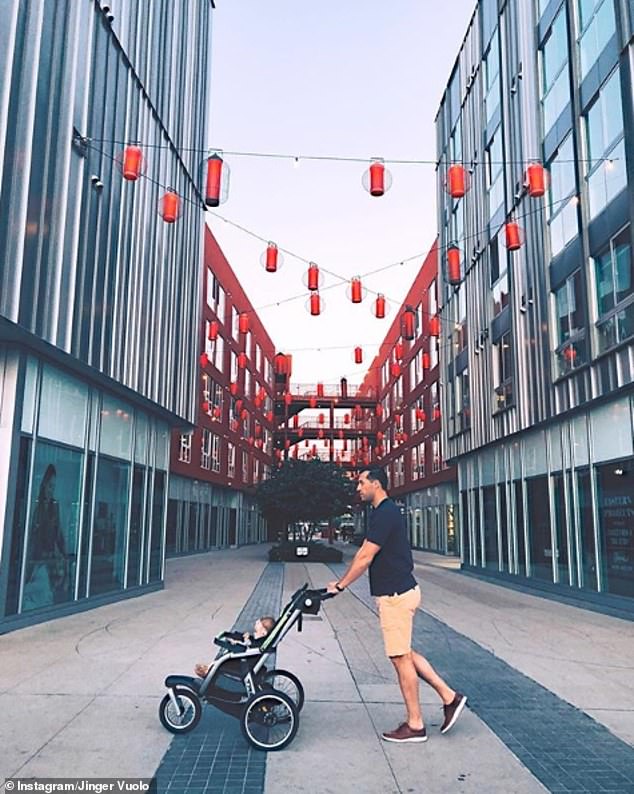 Totally candid: Her life has expanded since she got married, and she seems to have left a lot of her parents’ strict rules behind

Earlier that month, they also made a stop at the clothing store Armani Wells, which is owned by actress Claudia Wells.

Claudia — who starred as Marty’s girlfriend Jennifer in the Back to the Future movies — posed for pictures with them and signed autographs.

Jinger wrote with excitement about the meeting, even though it’s unclear if she’s ever seen Back to the Future.

She grew up without televisions in the house, and she was only permitted to see Christian movies — like those starring Kirk Cameron.

Jeremy, however, had a more secular upbringing, and may have introduced her to the movie.