Jo Swinson faces Brexit backlash as Lib Dem leader prepares to tell party Brexit is ‘like planning to burn your house down’ and rivals line up to warn her: ‘You’re playing with fire’

Jo Swinson was last night caught up in a ferocious backlash over Lib Dem plans to cancel Brexit.

The party’s dramatic new pledge has been overwhelmingly backed by conference delegates in Bournemouth.

Despite the result of the 2016 referendum, the Liberal Democrats are now committed to revoking Article 50 immediately if they win the next general election.

Yesterday the pledge prompted condemnation, including from some of the party’s own MPs and peers.

But in spite of the fierce reaction, Miss Swinson will today insist she can be Britain’s next prime minister and her party is prepared to ‘seize the opportunity’.

In her maiden speech as leader at the Lib Dem conference, she will brand Boris Johnson a ‘socialist dictator’ and accuse both the Tories and Labour of having ‘failed’ the country.

She will also say spending on no-deal preparations is ‘sickening’, adding, ‘The truth is you can’t plan for no deal.

‘Planning for no deal is like planning to burn your house down.

‘You might have insurance, but you’re still going to lose all your stuff.’

However, Miss Swinson was warned that she was ‘playing with fire’ by pledging to overturn a democratic vote by former health minister Norman Lamb. 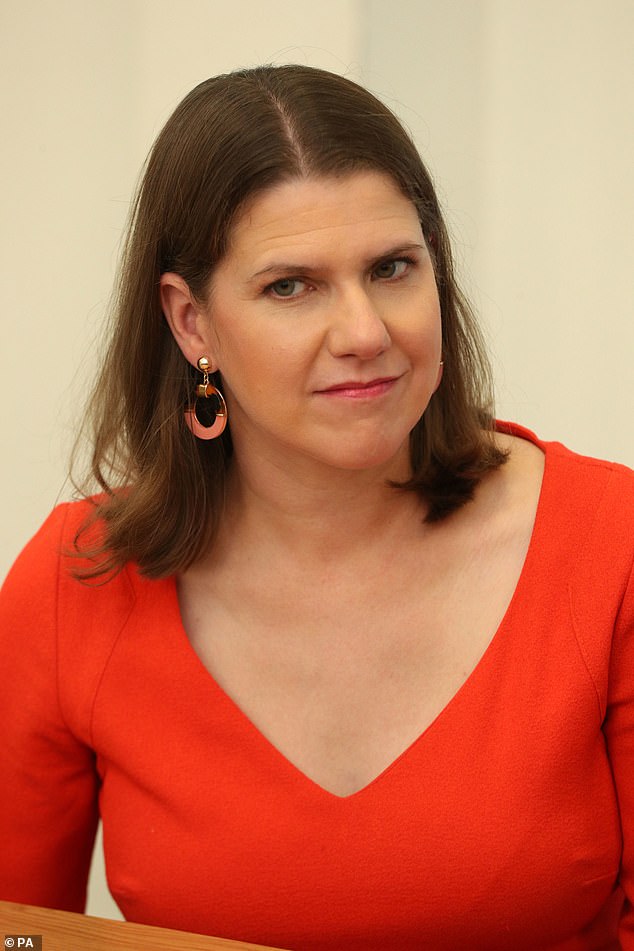 In her maiden speech as leader at the Lib Dem conference, Jo Swinson will brand Boris Johnson a ‘socialist dictator’ and accuse both the Tories and Labour of having ‘failed’

The outgoing Lib Dem MP for Brexit-backing North Norfolk added that the policy was a ‘threat to the union’ and risked worsening the already ‘incredibly dangerous’ divisions in the country.

‘If we take this to the very limit in a situation where one side is vanquished entirely, there’s a danger that we break the social contract in our country,’ he told Radio 4’s Today programme.

He also warned against the Lib Dems being seen as ‘a single-issue party’.

More criticism came from Lord Paul Scriven, who tweeted: ‘Our new policy on Article 50 is wrong and we are boarding [sic] on becoming extreme on Brexit. We will not help to bring the country together if we unilaterally act in this way.’

He added: ‘I see the social chaos that Brexit has released. We need to deal with that. The new policy doesn’t and that’s why I can’t support it.’

Andrew George, who narrowly lost his St Ives seat in 2017, said: ‘Claiming we’d unilaterally stop Brexit without a referendum if we win the next general election is unnecessary, wrong and counter-productive.’

Footage has emerged showing how Jo Swinson previously argued for a referendum on EU membership.

In 2008, the Lib Dem leader was vocal in favour of an In/Out poll and criticised the EU for being inefficient, old-fashioned and cumbersome.

The images taken in Parliament reveal how she spoke out as the Lisbon Treaty, which was signed in 2007, created a more powerful European Parliament and a long-term President of the European Council. Miss Swinson was challenged on the treaty and if she would advocate a referendum on EU membership.

She then told MPs: ‘The Lib Dems would like to have a referendum In and Out of Europe.’

The footage was tweeted yesterday by Tobias Ellwood, Tory MP for Bournemouth, who said she has gone from calling for a vote to ‘completely ignoring’ the 2016 result.

Tory Party chairman James Cleverly commented: ‘The Lib Dems are determined to cancel the largest democratic vote in British history without so much as a whimper.’

It was ‘shocking’ they are ‘now so eager to trample over democracy’, he added. But Miss Swinson has repeatedly insisted it was right to try to cancel Brexit.

After the controversial vote, she said: ‘We will do all we can to fight for our place in Europe and to stop Brexit altogether.’

In her speech today, she will declare: ‘The tired old parties have failed. Our country needs us. We need to seize the opportunity now.

There is no limit to my ambition for our party. And today I am standing here as your candidate for Prime Minister.’

Miss Swinson will also launch an accusation against Mr Johnson: ‘Silencing critics. Purging opponents. Ignoring the law. For someone who proclaims to hate socialist dictators, he’s doing a pretty good impression of one.’

On Labour, she will say: ‘Nigel Farage might be Brexit by name but it is very clear that Jeremy Corbyn is Brexit by nature.’

Planning for No Deal is like ‘burning your house down’, she will add. ‘You might have insurance but you’re still going to lose all your stuff.’

If the Lib Dems, who have only 18 MPs, do not win the next election, they would continue to push for a second referendum.