Joan Baez is refusing to go quietly. Embarking on what she insists will be her final tour, the legendary singer and cultural icon has no shortage of choice opinions to get off her chest.

At 77, as befits her status, the Queen of Folk is both earthy and slightly grand, airing her thoughts on today’s female pop stars (‘the bottom of the barrel’), ex-lovers Bob Dylan (‘paranoid’) and Steve Jobs (‘complex and driven’), her pending retirement (‘whoopee!’) and much else besides.

Joan Baez hasn’t talked to Dylan in 25 years, but there’s residual warmth there. ‘Whatever went on between us is totally healed. There’s still a bond, and that’s enough for me’ 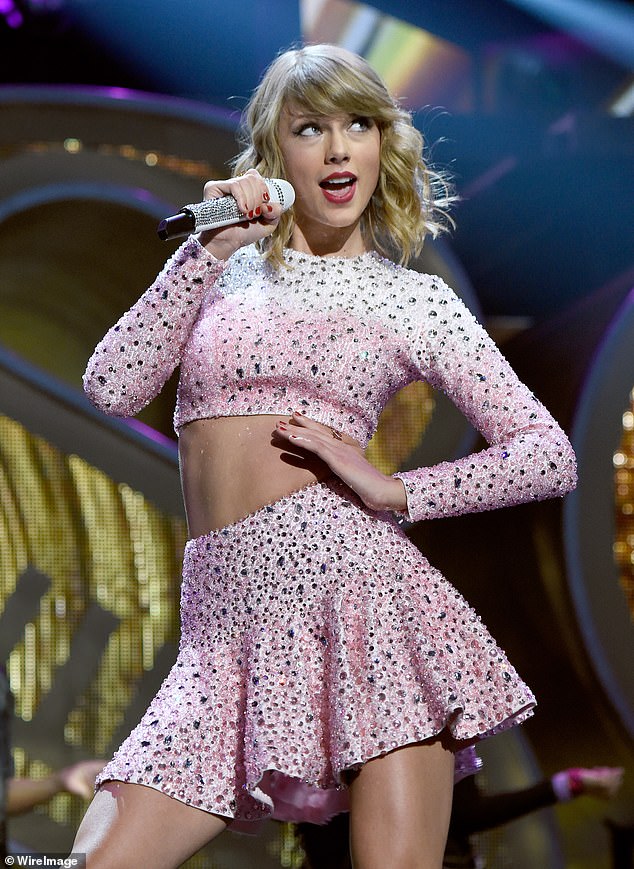 Baez has reservations about the likes of Beyoncé and Taylor Swift, harrumphing over the overt sexualisation and lack of political engagement

Baez’s current tour brings down the curtain on a remarkable story stretching back 60 years. During that time she has performed for JFK and Barack Obama, befriended Dr Martin Luther King and been jailed for anti-war protests. Her stirring version of We Shall Overcome became an anthem for the civil rights movement, while Diamonds And Rust presented a more vulnerable, poetic side. Soaring on hit albums such as Joan Baez In Concert and Farewell, Angelina, Baez’s impossibly pure soprano became the voice of at least one generation, influencing everyone from Joni Mitchell to Laura Marling.

She made a star of Dylan and sold more than ten million records. All of which, she reckons, is enough for any career. After this tour Baez may perform again on special occasions, but ‘six weeks on the bus, two hours on stage, two nights in a row? No, that’s what this is a farewell to.’ Her fine new album, Whistle Down The Wind, is also likely to be her last. Not that she’s been scared off by the competition. Baez has reservations about the likes of Beyoncé and Taylor Swift, harrumphing over the overt sexualisation and lack of political engagement.

‘The bar is at the bottom,’ she says. ‘It’s like a stand-up comedian who has to say “d***” every other sentence to get laughs. I’m just not interested. That’s what sells the album – yourself half-nude on the cover. It would be wonderful if they just sang.

‘In some ways these are very strong women – especially Taylor. She’s an industry, and she is also nice, but she’s not political. I mean, I don’t know what she would take a stand on. I would think that if she said something about the #MeToo movement it would be very powerful for young people. But she says nothing.’ 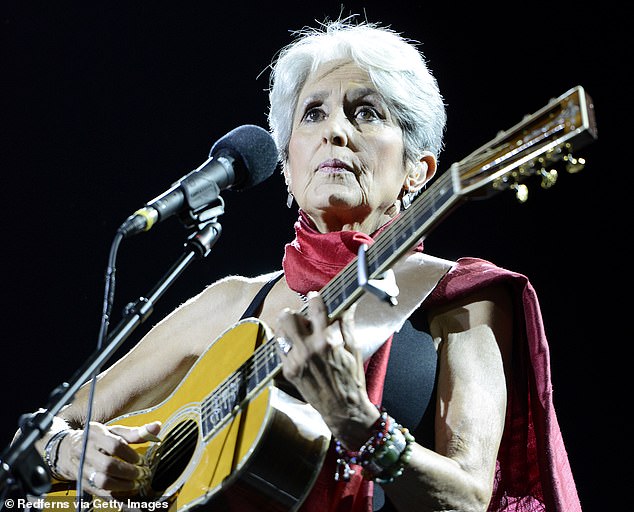 Though Baez is sympathetic to the #MeToo and Time’s Up movements, they don’t chime with her own experiences as a woman in the entertainment industry

Baez describes herself as an ‘old fuddy-duddy’, but she’s far from it. She laughs readily, curses like a trooper and has no truck with pussyfooting niceties. She knows the intricacies of fame better than most. Aged 18, she became a star at the 1959 Newport Folk Festival and released her first album, Joan Baez, in 1960. Throughout the Sixties she made landmark albums and campaigned incessantly for civil rights and against the Vietnam War. We Shall Overcome, a Billboard pop hit for her in 1963, was sung at every rally and festival in the land, becoming as significant to America’s liberal youth as the #MeToo hashtag is today. In 1969 she was the second-highest-paid performer at the Woodstock festival.

Through it all she seemed remarkably grounded, but underneath, she says, ‘I was terrified of it getting out of control, which is why I overdid it on the other side. I was such a priss! I demanded a plain black background on stage. People would bring flowers – “Ugh no, get them away!” I was more interested in politics than music. It infused everything, and some people got really fed up with it. On more than one occasion a member of the audience has shouted, “Shut up and sing!” I get it now. I was impossible, but I had to do it.’

Though Baez is sympathetic to the #MeToo and Time’s Up movements, they don’t chime with her own experiences as a woman in the entertainment industry. ‘With a “star”, it really doesn’t matter if you’re man, woman, or in between,’ she claims. ‘I had to toughen up, in that I had to survive in the world, but not because there were men around.’ She pauses. ‘You know what? I didn’t really care. I was such an egomaniac, it never occurred to me.’

Has fame ever made her fearful? ‘I’ve never had dangerous stalkers, just obnoxious ones. The most dangerous was a guy we had a restraining order on. He threw a book at me during a concert. I picked it up and it was Jaws!’ She hoots. ‘I thought, this guy is thicker than I thought. That’s the most extreme I’ve ever had.’

Her relationship with Dylan lasted from 1963 to 1965. She later portrayed him – ‘Your eyes were bluer than a robin’s egg/My poetry was lousy, you said’ – in one of her greatest songs, Diamonds And Rust. By far the more famous and successful when they first met, Baez gave him a platform at the beginning of his career. In the end she was sidelined, the death throes captured in Don’t Look Back, the classic fly-on-the-wall documentary of Dylan’s 1965 UK tour. It wasn’t pretty. 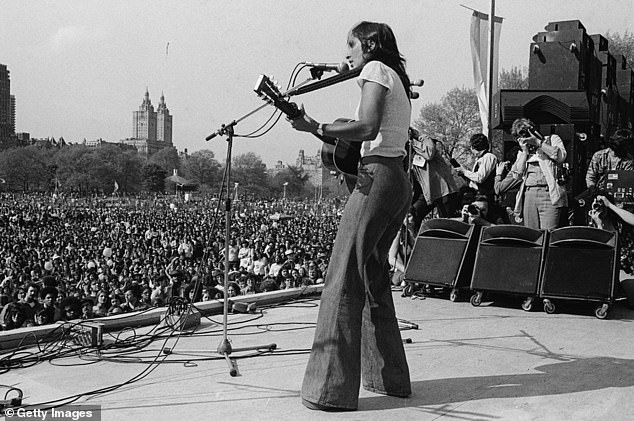 ‘Dylan and I couldn’t figure out how we felt about each other,’ she says. ‘The other problem was that I was the only one who wasn’t doing drugs. I was on the outside. Even if I tried to be cool and hang out with everybody, which I did, I wasn’t comfortable.’

When it came to drugs, she says, ‘I used to think I was better than everybody, but actually I was just scared s***less! I was one of those people who didn’t want to give up any of the control we thought we had, so I just didn’t indulge. One of the funniest images I remember are my encounters with Janis Joplin. Twice I said, “Oh, you’ll have to come over some time and have tea.” Tea! But that’s what I do, it comes from my mum. Janis laughed and held up a bottle of whisky in a paper bag. I was the mother figure, an old schoolmarm. It set me apart.’

She hasn’t talked to Dylan in 25 years, but there’s residual warmth there. ‘Whatever went on between us is totally healed. There’s still a bond, and that’s enough for me. The fact that I’m linked with him for ever in some people’s perspectives – well, there could be worse things. I’m smart enough to know that I never understood him, and never will. I probably came closer than a lot of people but in the end, no, I don’t understand any of it.’ She has a theory, though, on his ability to retain a mystique. ‘You need a healthy amount of paranoia,’ she laughs. ‘Just saying!’

Baez married only once, to journalist and activist David Harris, the father of her son, Gabriel. Their relationship ended in an amicable divorce in 1973. In the early Eighties she dated Apple founder Steve Jobs, then in his mid-20s and already a multi-millionaire. ‘He was complex and very driven,’ says Baez. ‘I don’t know what we had in common. We’d have these fights where he would say, “I’m going to create a computer that can outdo a Bach quintet.” I’d say, “No you can’t, a computer doesn’t have a soul.” He was sweet with me, though. There are a lot of stories about him where he wasn’t so sweet, but my time with him was interesting because we were so different.’

Aged 76, 74, 74 and a sprightly 70 (Ronnie Wood is the baby of the band, Charlie Watts the elder statesman), The Rolling Stones remain in rude health. Their first UK dates since 2013 are highly anticipated. London, Manchester, Edinburgh, Cardiff from May 22-June 19

Master of the chanson, composer of She and The Old-Fashioned Way, Aznavour takes a final bow at the age of 93, becoming the oldest artist ever to headline the Royal Albert Hall. Royal Albert Hall, London, June 30 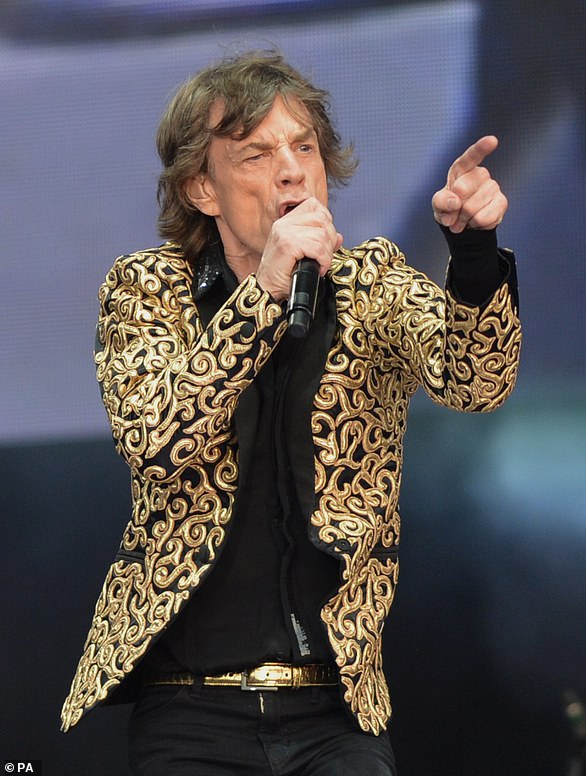 The Rolling Stones remain in rude health. Their first UK dates since 2013 are highly anticipated

Aged 76, Simon is embarking on his Homeward Bound farewell tour, signing off ‘with a big thank you’ at the Hyde Park BST Festival on July 15. Will Art Garfunkel be invited? Probably not. Manchester, Glasgow, London, from July 10-15

The Four Seasons are one of the best-selling groups of all time, and the success of the Jersey Boys musical has kept their catalogue (Walk Like A Man, Can’t Take My Eyes Off You, Rag Doll) fresh and their singer, aged 83, in high demand. Leeds, Glasgow, Birmingham, London, Manchester, from Nov 28-Dec 6

She lives alone now, in northern California, by choice. ‘I underwent really deep therapy, cleared up a lot of stuff, came out the other end and thought, Now I’m supposed to go find a partner? Oh s***! I’ve done all this work, I’m happy, I’m comfortable.’ She admits to some regrets, but ‘not the big kinds, just some personal stuff. I wish I’d spent more time with my son when he was little, normal stuff like that.’ Gabe is now part of her touring band, and mother and son often embark on shared therapy sessions.

In recent years Baez has lost her Edinburgh-born mum, Joan Sr, at the age of 100, as well as her sister Pauline. ‘Confronting loss is an ongoing process,’ she says. ‘I surround myself with Buddhist teachers when I can, because they bring some ability to deal with it.’ If that sounds a tad lofty, she soon comes back down to Earth. ‘Even if I thought I’d come to terms with death, I would still be scared, as most people are, towards the end. I might get really Buddhist, but I’m going to want morphine, and I don’t want anybody to skimp on it!’

‘Whistle Down The Wind’ is out now on Proper. Joan Baez is touring until May 29. joanbaez.com