Ms Ryan announced she was resigning to join the breakaway Independent Group in protest at Jeremy Corbyn’s leadership, saying the party has become ‘infected with the scourge of anti-Jewish racism’.

Criticisms of Corbyn’s leadership include allegations of anti-Semitism, bullying and his approach to Brexit. 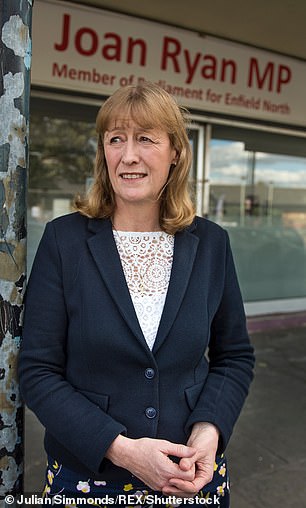 Journalist Jane Merrick, who quit the Labour Party last year over anti-Semitism concerns, tweeted: ‘Who is running the Young Labour Twitter account? Do Young Labour people really want to be associated with that hateful nonsense?’

One user called it ‘absolutely shocking’, while another said: ‘If those responsible for the Young Labour Twitter Output are really the future of the Labour Party, then The Labour Party is Doomed (and deserves to be)’.

Miriam Mirwitch, chairwoman of Young Labour, tweeted that she had not written the post, and vowed to continue ‘fighting for an open, inclusive and welcoming Young Labour’. 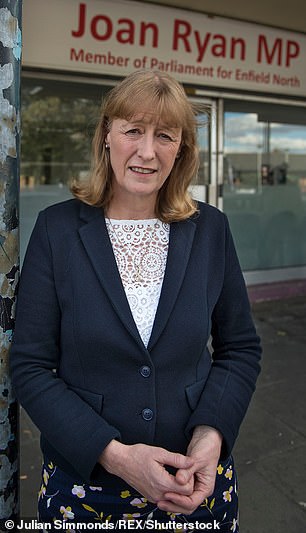 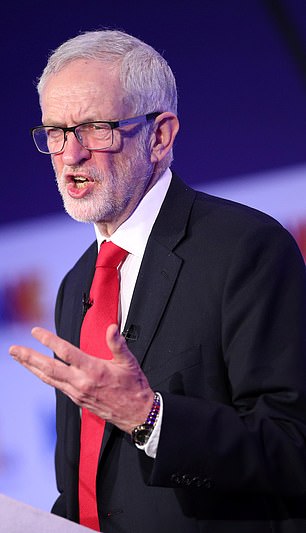 Joan Ryan (left) quit the Labour Party, saying it had become ‘infected with the scourge of anti-Jewish racism’ under the leadership of Jeremy Corbyn (right)

‘To make crystal clear, I did not send the tweet about Joan Ryan from the Young Labour Twitter account and I utterly condemn it,’ she said. ‘Multiple members of YL committee have access to the account. I’ll never stop fighting for an open, inclusive and welcoming Young Labour.’

She added: ‘Please don’t think the online conduct of a few on social media represents the whole of Young Labour.

‘There’s so much talent, so many brilliant activists and so much to be proud of in our movement. I’ll never stop fighting to make our movement a welcoming and inclusive place.’ 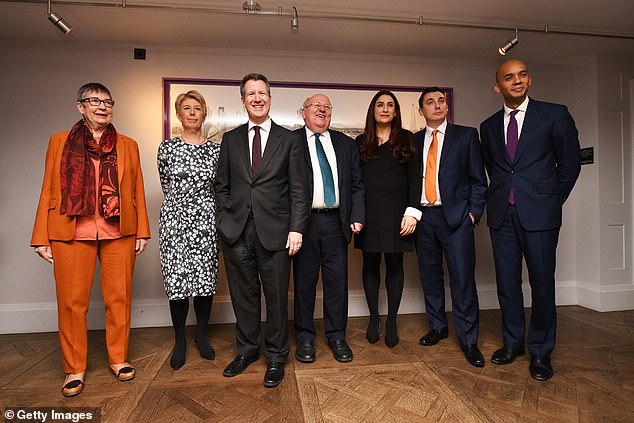 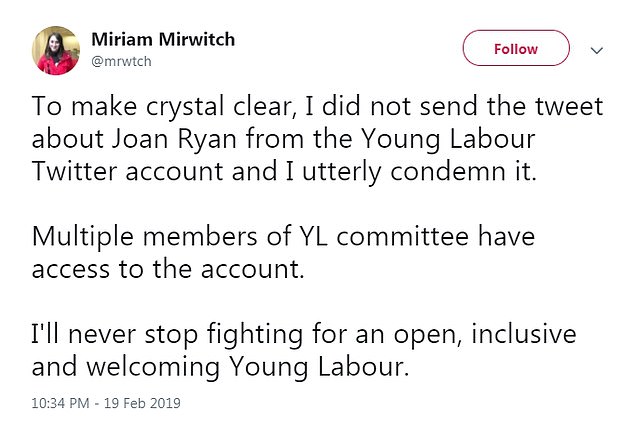 Ms Mirwatch had previously criticised a tweet sent from the account when the first seven Labour MPs resigned from the party on Monday.

While the septet were announcing their decision, the account tweeted a lyric from The Red Flag, which appeared to refer to them as ‘cowards’ and ‘traitors’.

Ms Mirwatch later tweeted: ‘This tweet is entirely inappropriate. I do not support it. I am strongly opposed to Labour splits, but the below is the incorrect response.

‘A member of Young Labour National Committee proposed that we delete this tweet. As this is so contentious, members of exec are voting.’