They appeared to confirm their romance last month when they were spotted strolling hand in hand through Portofino, Italy.

And Joan Smalls and her boyfriend Henry Junior Chalhoub put on another cosy display on Monday, when the loved-up duo was spotted embracing on a luxury boat in St Tropez.

Henry, 35, struggled to keep his hands off the model, 32, pulling her in for a hug and grabbing her bottom before whispering into the model’s ear. 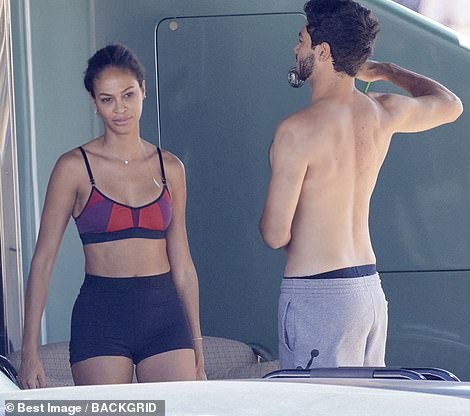 Loved-up: Joan Smalls, 32, and her boyfriend Henry Junior Chalhoub, 35, put on a cosy display on Monday, when the loved-up duo was spotted embracing on a luxury boat in St Tropez

Enjoying a couple’s workout, Joan put her rock hard abs on display in a sports bra and shorts, while Henry also wore shorts teamed with a black T-shirt.

In between cuddles the couple was seen lifting weights and performing stretches, with businessman Henry, 35, taking off his shirt so that he could stay cool while working up a sweat.

Joan wore her glossy brunette hair swept up into a bun and accessorised with two delicate necklaces. 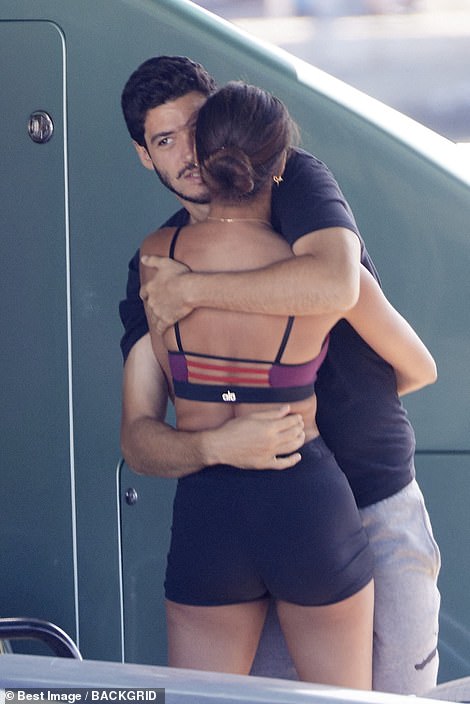 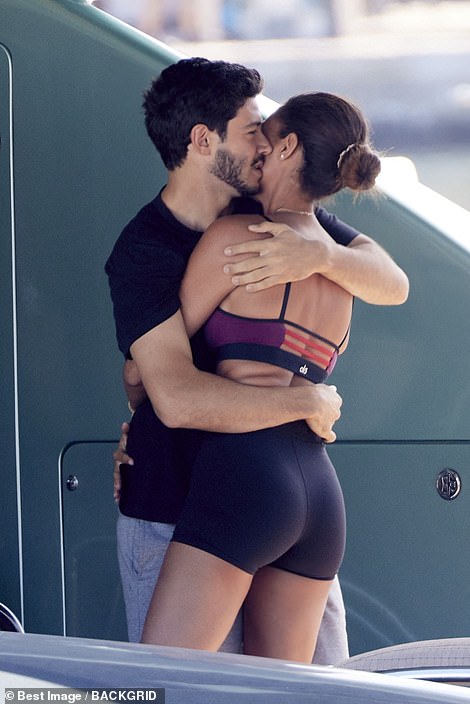 Happy: The pair seemed delighted to be in each other’s company and could barely keep their hands off one another 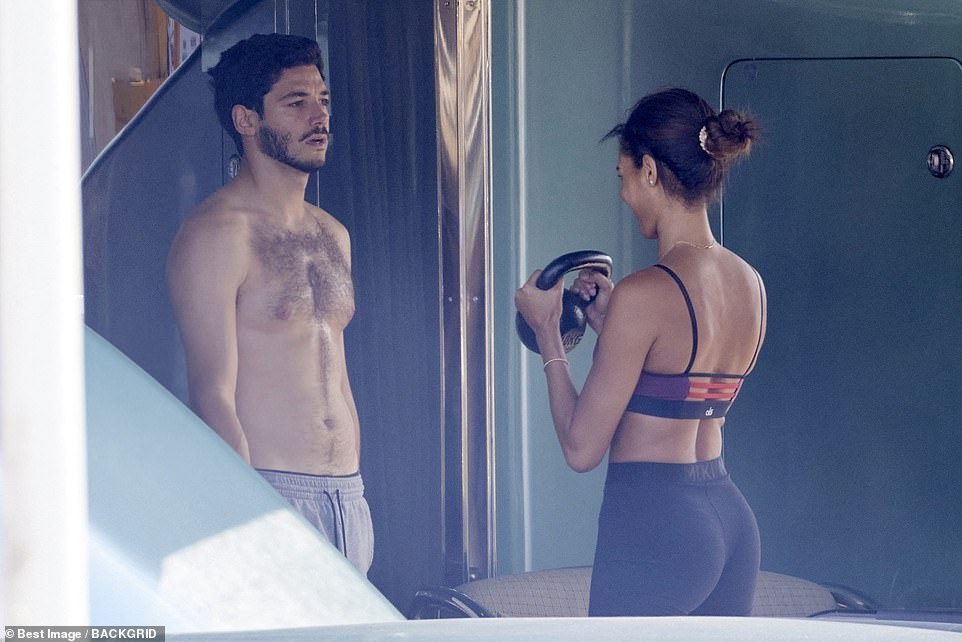 Shirt off: Henry took off his shirt so that he could stay cool while working up a sweat

Henry opted for a pair of workout-friendly trainers and made sure to stretch before lifting weights with his partner.

The pair was seen for the first time together last August when they were snapped on a luxury yacht looking incredibly cosy, but it was said at the time that their relationship was platonic.

Joan had been dating Modellounge founder Bernard Smith since 2011 – however they had not been pictured together since earlier in 2019. 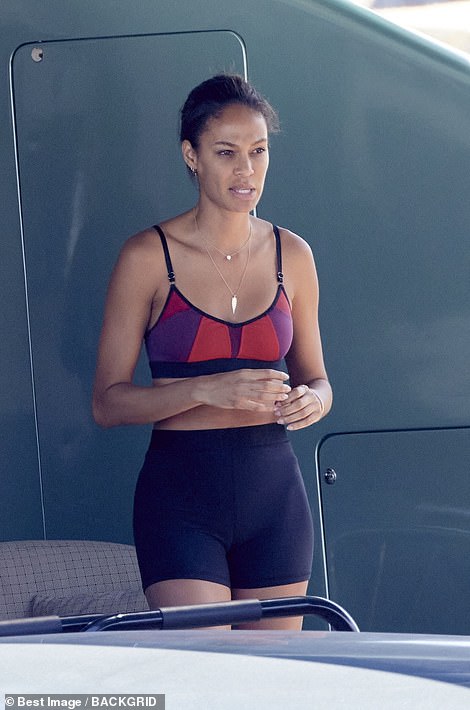 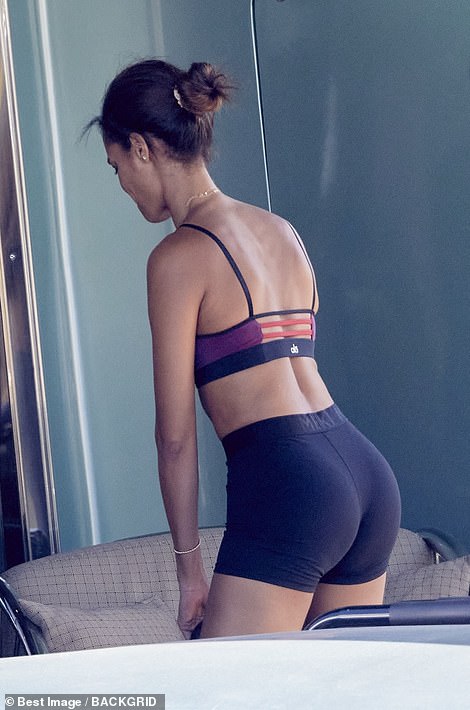 Working up a sweat: In between cuddles the couple was seen lifting weights and performing stretches 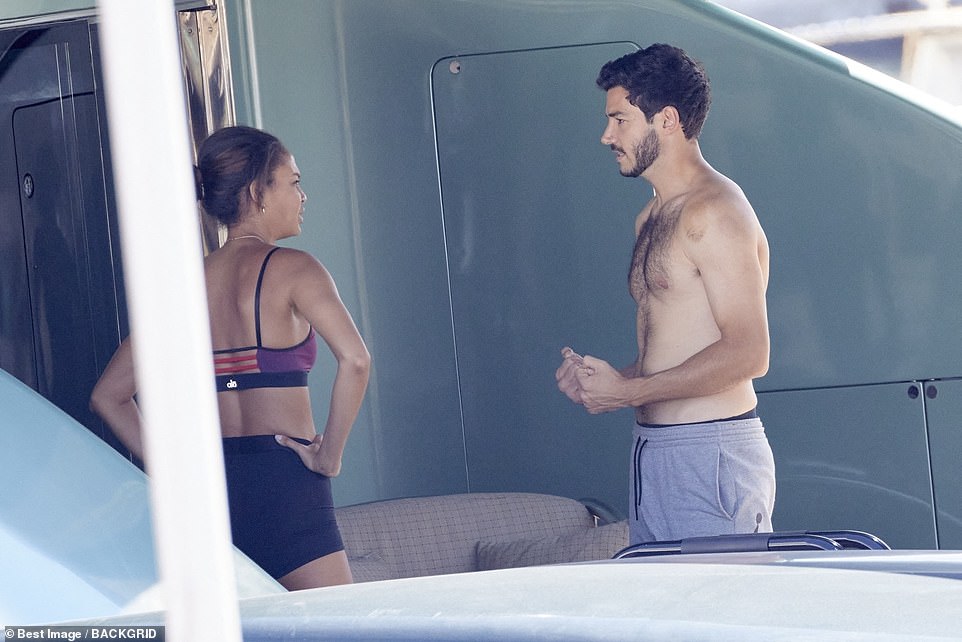 Seen in Miami together in January 2019, things looked to be going strong between Joan and Bernard – with her posing for beach snaps while he played photographer.

They were seen cuddling up on a sun-lounger people-watching together, looking very at ease. 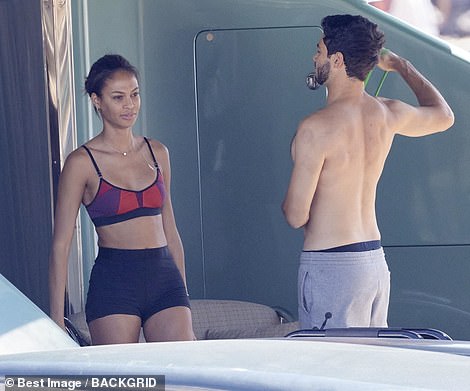 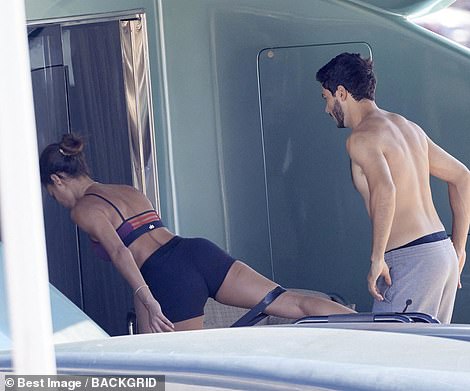 Peachy: Joan put her peachy bottom and toned physique on display as she worked up a sweat

They briefly split at the start of their relationship.

However, Bernard was able to win back her heart and the pair had been together since.

It appears that somewhere in early 2019, the couple called it quits.

It comes after Joan rang in her 33rd birthday in Greece last month.

While enjoying a leisurely afternoon on the beach, the supermodel rocked a pink and green one-piece with two cut outs across her very toned midriff.

Joan has become known for her statuesque physique, strutting the runway multiple times as a Victoria’s Secret Angel. 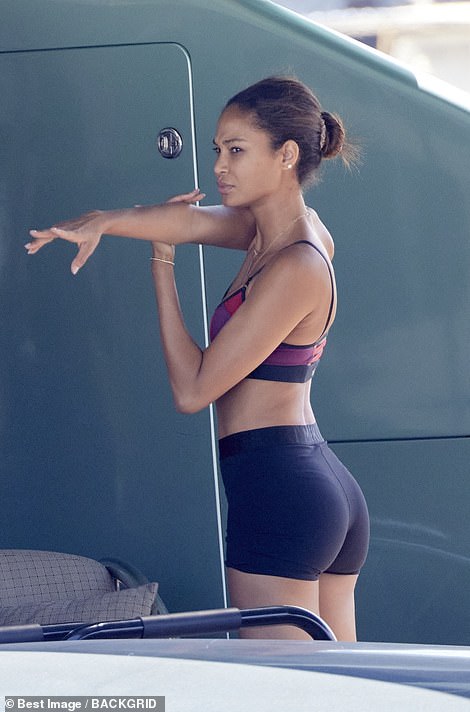 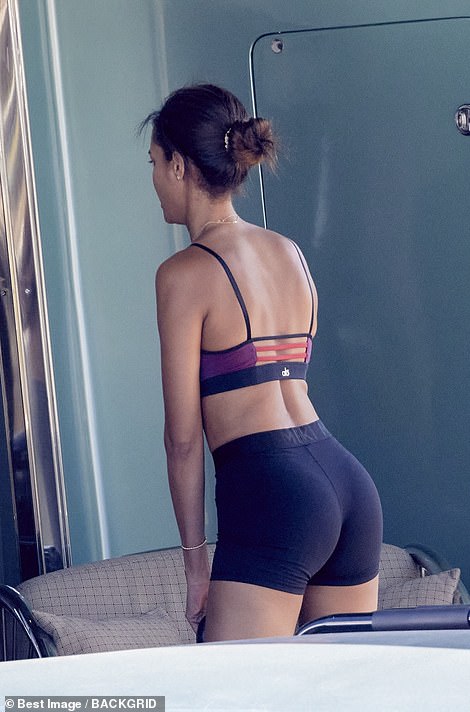 Toned: Joan gave an insight into how she manages to keep her figure in runway-ready shape 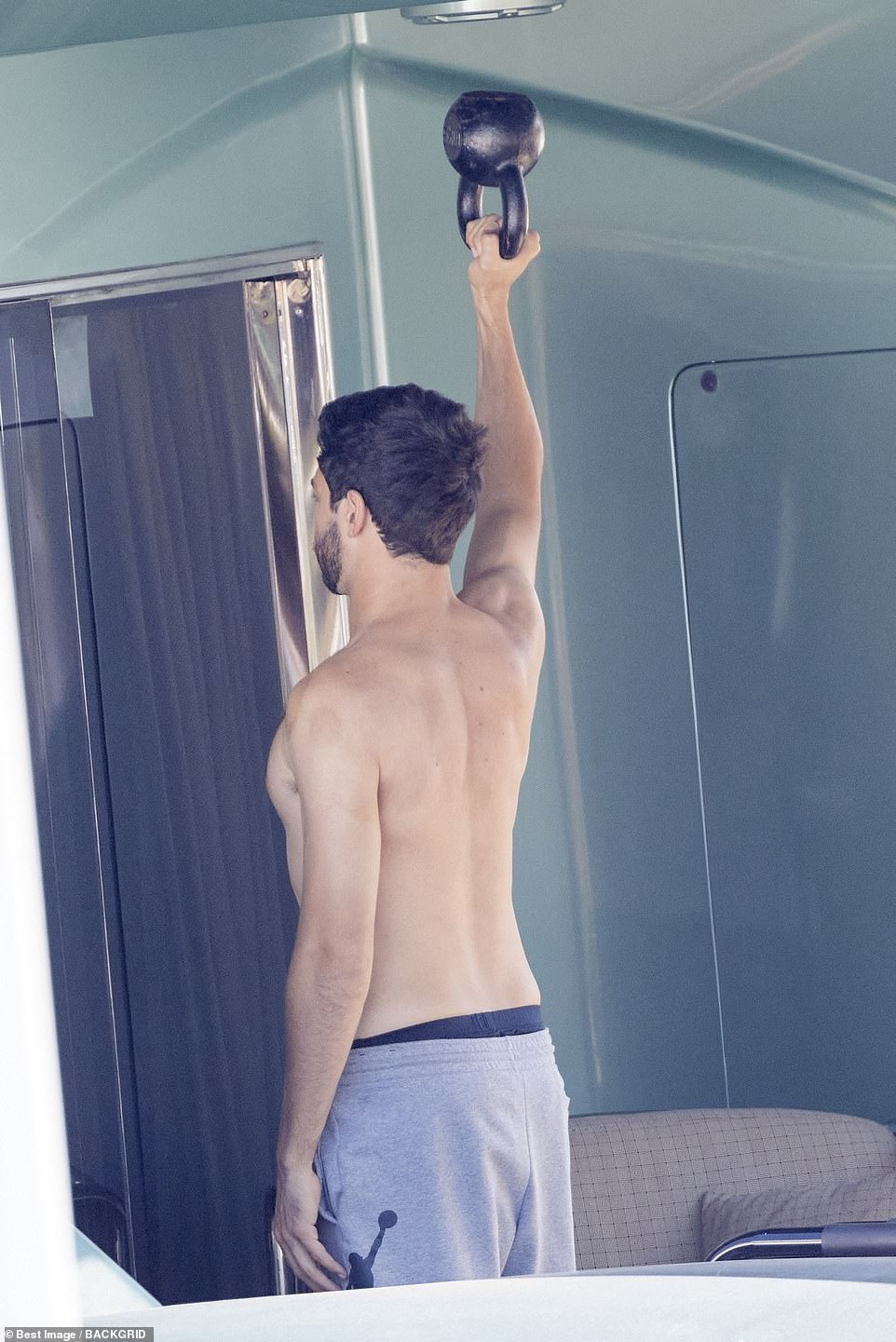 Strong: Henry showed off his strength as he lifted weights while standing next to his girlfriend

Speaking about how she stays in shape, she previously told Vogue: ‘I work out almost every day and I mix it up: I do Thai kickboxing, I have a personal trainer, I work out at my gym.

‘I actually like working out. It’s such a stress reliever when you’re just focusing on yourself and not thinking about anything else except the music and your body.’

The 5ft 10in catwalk queen was also asked by Emirates Women, if there was anything she wanted to change about the modelling industry. 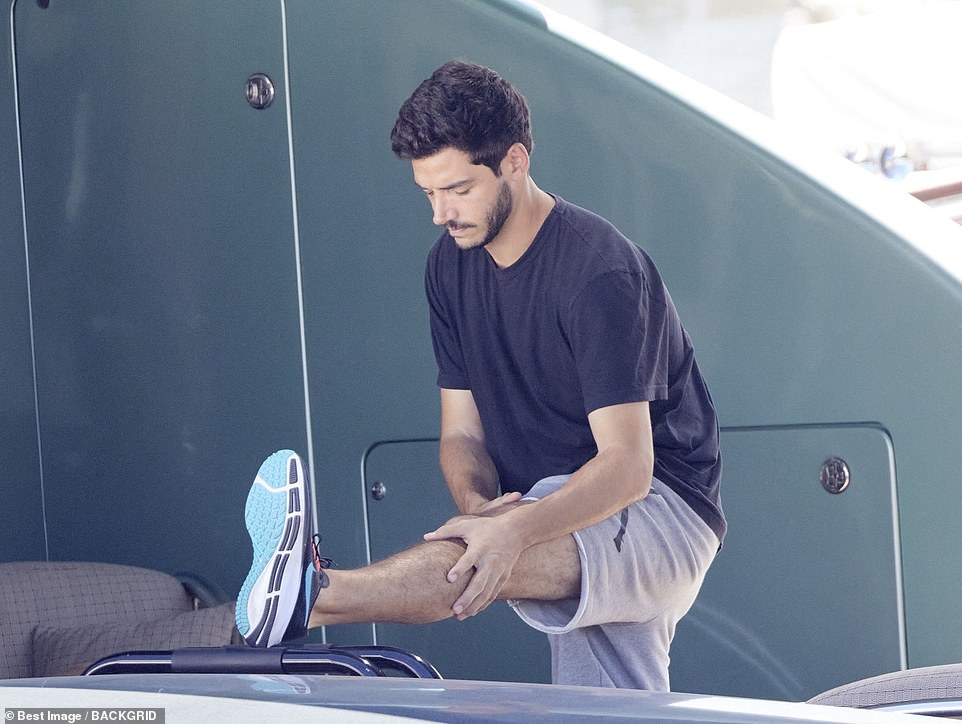 Stretch: Henry opted for a pair of workout-friendly trainers and made sure to stretch before lifting weights with his partner 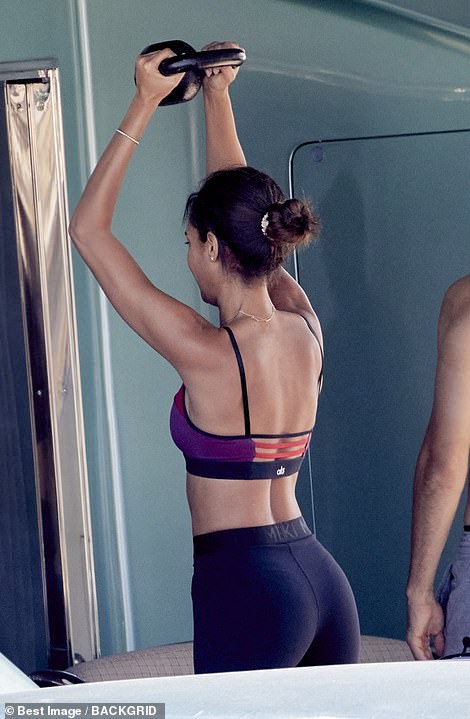 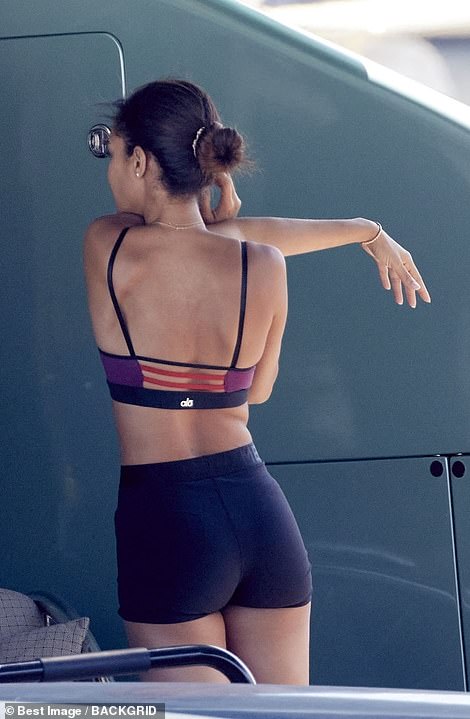 Joan admitted: ‘To have a social responsibility when deciding the message they put out to their consumers and not just do it because they are riding the wave of trends.

‘Also to have transparency in jobs/ contracts – it has become much more than just showing up. There are so many variables that I think agencies should be more direct and honest in some instances.’

Back in 2013, the stunner entered Forbes magazine’s World’s Highest-Paid Models list for the first time, ranking at number eight with over $3 million in earnings. 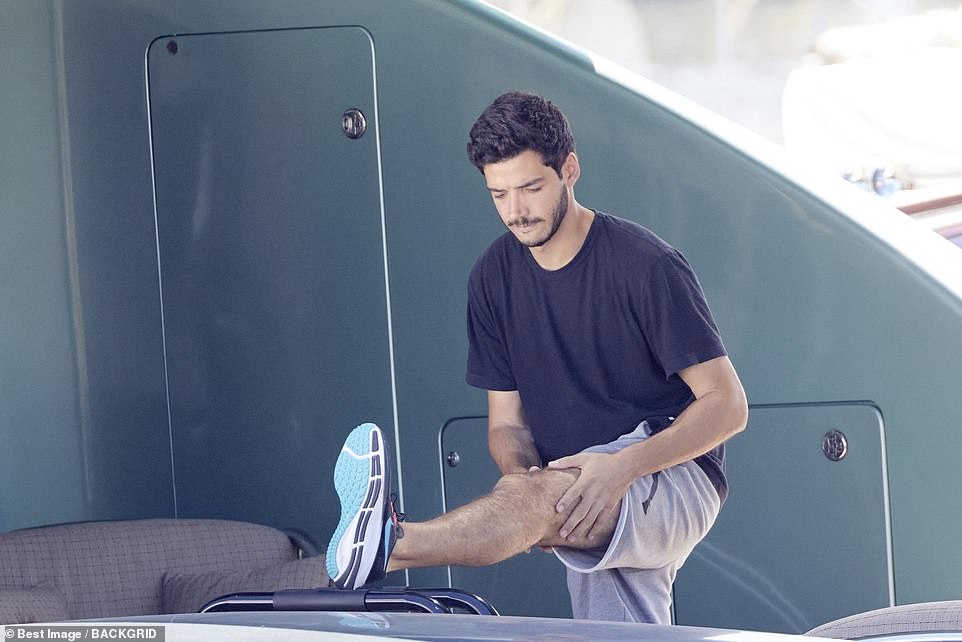 Legs: Giving his limbs a good stretch, Henry propped his leg up on the side of the boat