She was previously spotted out trying on sparkling engagement rings during a recent trip to Poland.

And now Joanna Krupa has confirmed she is engaged to the hitherto unknown Douglas Nunes after sharing an image of the huge diamond encrusted ring on Instagram.

The Polish-born model and actress, 38 posted a picture of herself wearing the sparkler on her wedding finger while holding hands with Nunes, the President and partner of property development and entertainment company 451 Media Group.

What a sparkler! Joanna Krupa confirmed her engagement to boyfriend Douglas Nunes as she posed sporting a huge diamond ring on Sunday

She captioned the image: ‘Just another weekend in the Krupa-Nunes household.’

The caption suggested that her new fiancé is indeed Nunes, who she also tagged in the photo, and comes less than a year after she finalised her divorce from Romain Zago in August 2017.

Also featured in the snap are three adorable dogs, who didn’t seem to be as excited about the news as Joanna’s fans while slumbering on her bed. 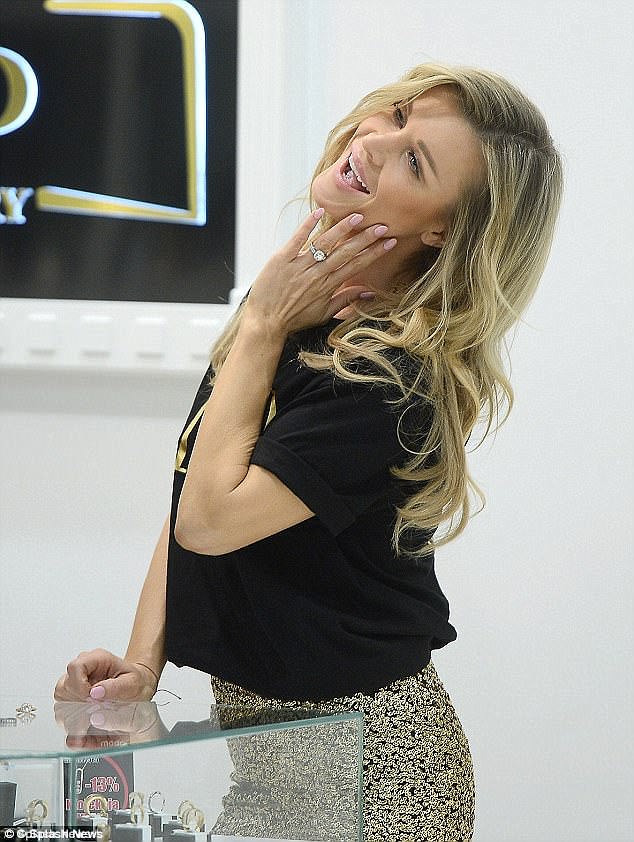 Happy lady: Joanna was previously seen trying on the ring during a trip to Poland in January

One fan commented: ‘Congratulations!! Wishing you many years of love and happiness.’

While another added: ‘Oh my gosh!!! Congratulations you deserve nothing but happiness.’

One commenter was happy that Joanna had found happiness again, posting: ‘Congrats you deserve the best I’m happy you found Love again and I wish you the best today and always, your ring is stunning just like you.’ 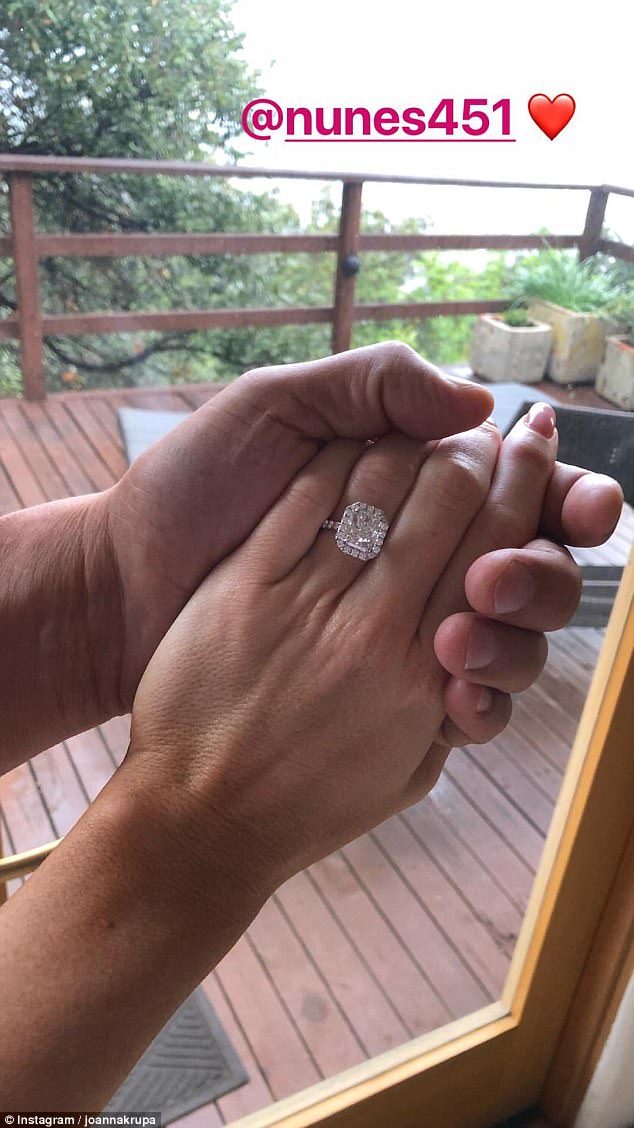 Engaged! The Polish-born supermodel posted another picture of herself wearing the sparkler on her wedding finger while holding hands with her rumoured boyfriend

Another added: ‘So happy for you! You deserve all the love in the world!!’

Last October, Joanna hinted that she was single when she spoke to US Weekly and admitted she was focusing on her work.

She said at the time: ‘Honestly, right now I’m trying to focus on work. I just feel like men in Hollywood are looking for a trophy wife. 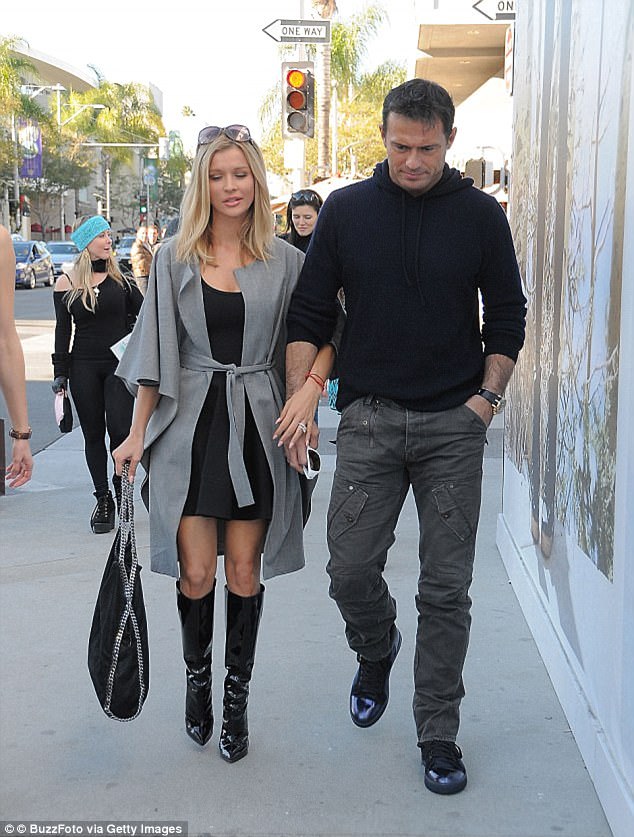 In the past: She finalised her divorce from Romain Zago in August, after four years of marriage (Pictured together in 2015)

‘It’s really hard to get to know somebody. If prince charming comes along, great, but I just feel like it’s really tough in LA.’

Despite the emotional process, Joanna proved there was no ill will between the couple, telling DailyMail.com: ‘We’re on great terms and I’m very grateful Romain is supporting me right now. We are on great terms, we talk more than ever.

‘We’re best friends and not much has changed. I’m very grateful to have Romain’s support and we respect our ten years together.’ 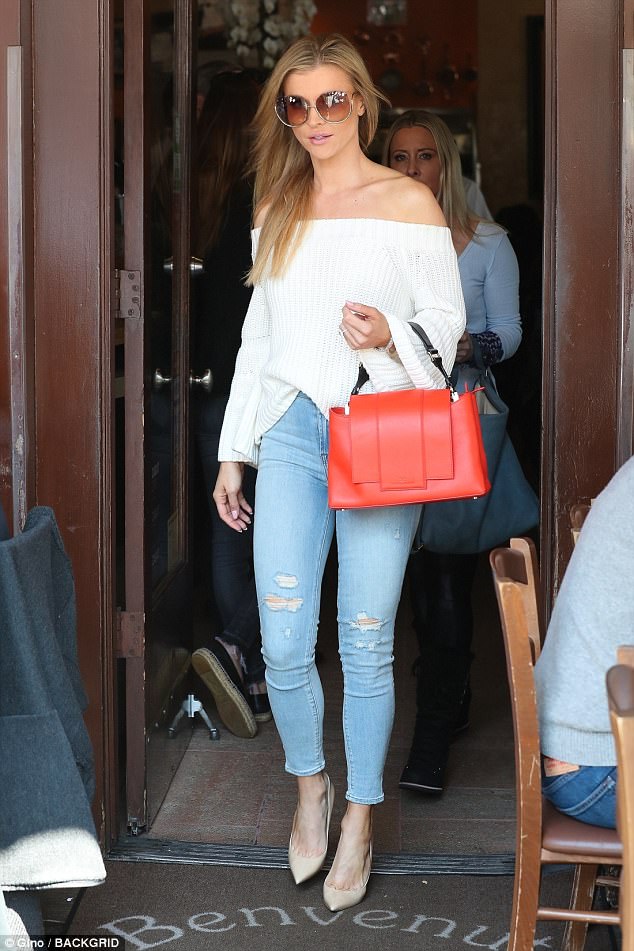 Not so single? Last October, Joanna hinted that she was single when she spoke to US Weekly and admitted she was focusing on her work

Joanna, who has also been linked with restaurateur Nico Santucci, appeared to be in high spirits as she tried on engagement rings during a trip to Poland in January.

A source close to Joanna told MailOnline: ‘Joanna and Nico are strictly friends. Joanna is in a relationship but at this stage they want to keep things private.

‘Joanna is not engaged to a film producer but she will say she is super happy but not ready to make it official yet.’