He’s the seventh actor to take on the role of the Clown Prince Of Crime, and has been hailed by reviewers as the ‘most deranged version’ of the character yet.

And Joaquin Phoenix, who admitted to ‘going mad’ after he lost 52lbs for the role, stepped out on the red carpet to promote Joker at the 76th Venice Film Festival in Italy on Saturday.

The actor, 44, couldn’t help but put a smile on his face as he arrived at the event, mirroring his iconic character, as he met with an adoring mob of fans.

A journey: Joaquin Phoenix attended The Joker premiere in Venice after losing 52lbs for the role and ‘going mad’ while reviewers hail him for ‘most deranged version’ of the character yet

The actor looked sharp in a black suit, which he teamed with a crisp white shirt and a black bowtie for a classically handsome look.

His salt-and-pepper locks were slicked back over his ears, and he wore a pair of robust shades to cover his eyes as he posed for photos.

Joaquin was joined on the red carpet by his co-star Zazie Beetz and the director Todd Phillips, and the trio looked delighted ahead of the film’s screening. 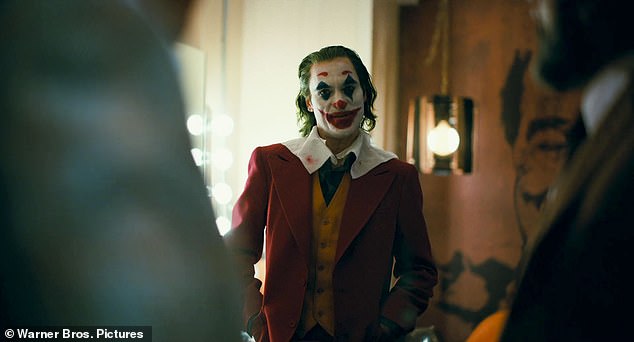 Iconic role: Joaquin the seventh actor to take on the role of the Clown Prince Of Crime 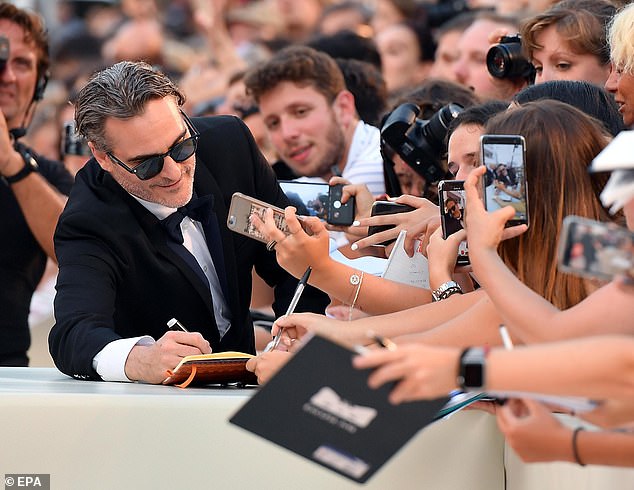 Delighted: The actor, 44, couldn’t help but put a smile on his face as he arrived at the event, mirroring his iconic character, as he met with an adoring mob of fans

Speaking to The Hollywood Reporter about the role, Joaquin claimed that losing weight in preparation for the role ‘affects your psychology’ as it means that ‘you start to go mad’.

Explaining how the process of shedding 52lbs informed how he played the role, he said: ‘The first thing for us was the weight loss.

‘I think that’s really what I started with. And, as it turns out, that then affects your psychology. You start to go mad when you lose that amount of weight in that amount of time.’

Joaquin isn’t the only actor to go full out for his role, as Health Ledger went fully method for his wild Oscar-winning turn in Christopher Nolan’s 2008 The Dark Knight, as he never broke character while on set.

Heath’s co-star Christian Bale told The Hollywood Reporter that the actor was so into his character that he even demanded he ‘hit him for real’ during a scene.

He explained: ‘As you see in the movie, Batman starts beating the Joker and realises that this is not your ordinary foe. Because the more I beat him the more he enjoys it. The more I’m giving him satisfaction.

‘Heath was behaving in a very similar fashion. He was kinda egging me on. I was saying, “You know what, I really don’t need to actually hit you. It’s going to look just as good if I don’t.”

‘And he’s going, “Go on. Go on. Go on….” He was slamming himself around, and there were tiled walls inside of that set which were cracked and dented from him hurling himself into them. His commitment was total.’

Joaquin follows in the footsteps of Heath, Mark Hamill, Jack Nicholson, and Jared Leto amongst many more.

In the standalone film in the DC universe, he depicts Arthur Fleck’s descent into madness in 1981 Gotham City.

He struggles to make ends meet while living with his mother and is also affected by a a condition that makes him sputter a pathological laugh even in the most inopportune moments.

Speaking to Collider in July about the role, Joaquin said: ‘It feels unique, it is its own world in some ways, and maybe, mostly, it scares the f***ing s*** out of me or something. It might as well be the thing that scares you the most.

‘I wouldn’t quite classify this as like any genre. I wouldn’t say it’s a superhero movie…I think, underneath the excitement of these films, and the size of them, there are these incredible characters that are dealing with real life struggles.’

‘And sometimes that is uncovered and exposed, and sometimes it isn’t, and so I always felt, like, there were characters in comics that were really interesting and deserve the opportunity to be kind of studied.’