The JobKeeper and increased JobSeeker payments will be adjusted in several phases from September, Scott Morrison said today.

Speaking at an exhibition display business in Miranda, south Sydney, the Prime Minister said the support payments would not be suddenly removed when they are due to end on September 27.

‘We have to look at our supports and our programmes as a series of phases,’ he said.

The JobKeeper and increased JobSeeker payments will be reduced in several phases from September, Scott Morrison said today. Pictured: Queues for Centrelink in April

‘And how many phases there are it is very difficult to say because there are so many uncertainties associated with COVID-19.’

The government has not yet revealed how much the payments will be in the next phase, with further announcements expected this week.

Mr Morrison said businesses would get several months to adjust to the next phase of support because the current levels do not end until September 27.

‘It will be targeted, it will be temporary, it will be effective as the first round has been,’ the Prime Minister said.

Treasurer Josh Frydenberg said some businesses may no longer qualify for JobKeeper in the next phase.

‘If that turnover is improved sufficiently and they are opening their doors, seeing more foot traffic through their shops, then the JobKeeper program may not be applicable to them,’ he told Sky News on Monday.

The Treasurer said the initial design of the program was based on getting money out as quickly as possible which meant it was not perfect.

‘One of the outcomes of that is that some people under the program received more money in the form of this $1,500 flat payment than they were receiving prior to the crisis,’ he said. 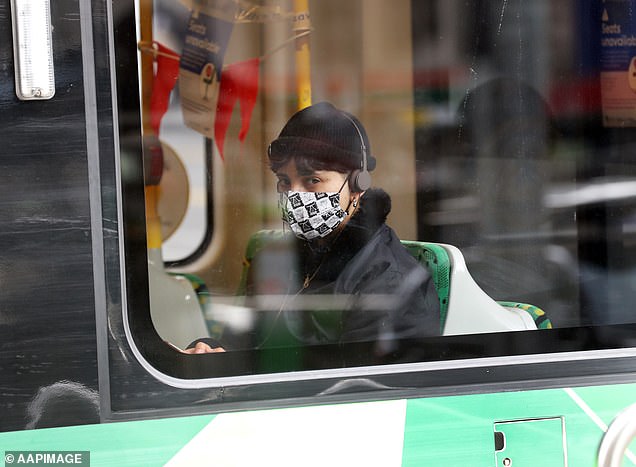 A tram passenger is seen wearing a mask in Bourke street in Melbourne. Victoria has recorded 275 cases of coronavirus and a woman in her 80s has died

Mr Frydenberg said sectors which would need help beyond September include aviation, tourism, arts and hospitality.

Under the existing scheme, companies turning over less than $1 billion with a 30 per cent fall in revenue are eligible.

Firms turning over more than $1 billion must show a 50 per cent decline.

Businesses that met the revenue test at any stage during the pandemic qualified for the payments for each employee.

‘There’s been a reasonable amount of waste and lack of targeting in how the government handled it first time around,’ he told ABC radio.

But the opposition is refusing to nominate a set figure for JobKeeper or JobSeeker, which has been temporarily increased to $1,100 a fortnight. 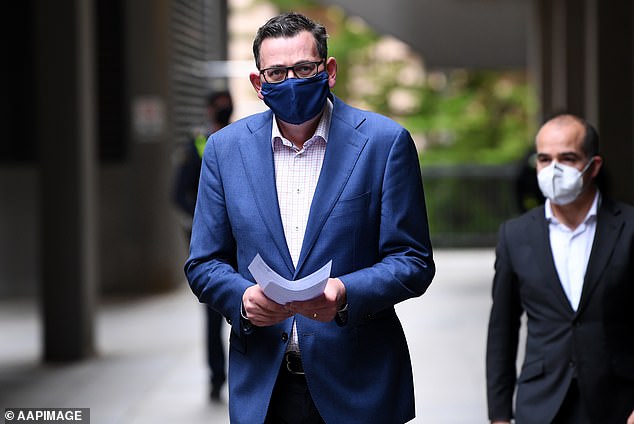 Mr Burke said the dole should not return to its old rate of $560 a fortnight.

Left-leaning think tank The Australia Institute has released modelling showing more than half a million Australians would be thrown into poverty if JobSeeker is returned to its former rate.

‘This will not only have serious negative social effects for decades to come, but makes terrible economic policy by effectively withdrawing much-needed stimulus,’ institute executive director Ben Oquist said.

‘It is still tough, it is extremely tough out there. But at a time like this, I think all Australians will be pleased they’re in Australia and nowhere else.’ 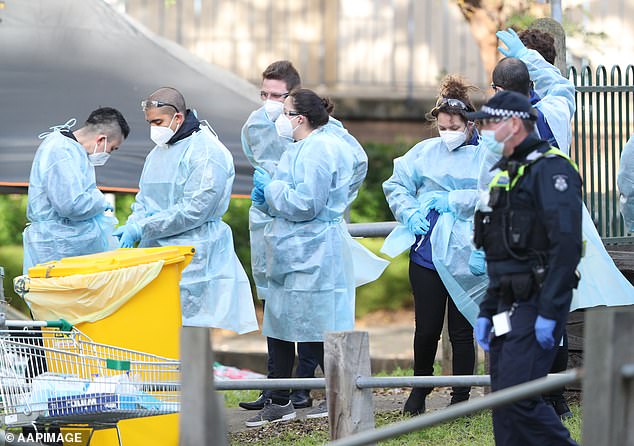 On Monday Victoria recorded 275 cases of coronavirus and a woman in her 80s died as New South Wales recorded 20 cases, its biggest total in three months.

Victoria’s figure is less than Sunday’s total of 363 and well below Friday’s record of 428, giving hope the spread is decreasing during Melbourne’s six-week lockdown.

Premier Daniel Andrews said 147 Victorians are in hospital, including 31 fighting for their lives, and 26,588 tests had been conducted.

Ninety-six people are in hospital in New South Wales with two in intensive care, including a person in their 30s. The state conducted 21,167 tests on Sunday. 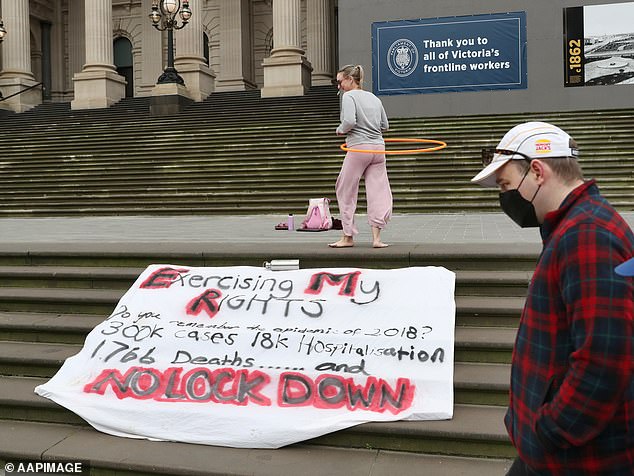 A man wearing a mask walks past a lone anti lockdown protester on the steps of the Victorian Parliament in Melbourne. The sign refers to Australia’s flu outbreak of 2018