Fact ran fiction close when, 24 hours after the catastrophic blunder that cost him a 21-day riding ban, jockey Paul Townend was loudly cheered into the winner’s enclosure following Next Destination’s win in the Grade One Irish Daily Mirror Novice Hurdle.

Equally amazingly, he rode a treble, part of a 6,235-1 six-timer for Willie Mullins that has dramatically carried the trainer into the lead in the race to be crowned Ireland’s champion jump trainer on Saturday.

The neck success on 5-4 favourite Next Destination immediately followed Townend’s win on Pravalaguna (11-4) in the Louis Fitzgerald Hotel Hurdle.

The jockey then won by a neck on Patricks Park (11-2) in the Guinness Handicap Chase. Pravalaguna was 27-year-old Townend’s first ride since he threw away victory on Mullins-trained Al Boum Photo in the Growise Novice Chase on Tuesday.

On Wednesday Townend explained he had veered right after he believed he had heard a shout to bypass the final fence before his mount crashed through the wing of the fence.

Next Destination initiated a Grade One treble for trainer Mullins, with David Mullins-ridden Bellshill also winning the Punchestown Gold Cup from stable-mate Djakadam, while Tornado Flyer, under Richie Deegan, made it a Mullins 1-2-3 in the Grade One Bumper.

Mullins’s sixth win of the day was Colreevy in the Mares’ Bumper, ridden by son Patrick.

But Wednesday was about Townend. The jockey said: ‘The reception meant a lot. I want to move on and I had a job to do today and that is the mentality I came with. 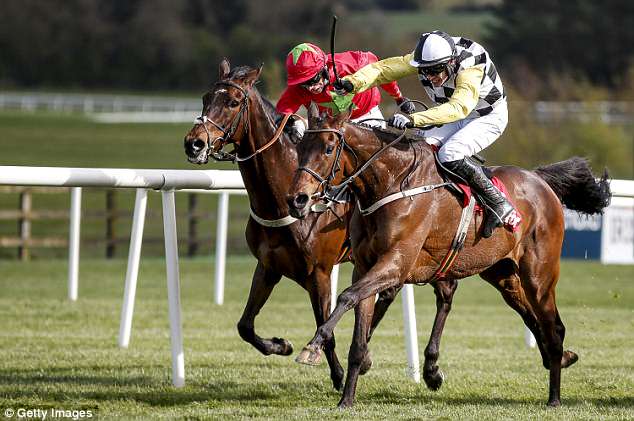 Townend rode a treble, part of a 6,235-1 six-timer for Willie Mullins, at Punchestown

‘That takes a bit of weight off my shoulders. I want to put it behind me and move forward.’

Mullins added: ‘Paul showed he had not lost his nerve or confidence. What happened yesterday could have destroyed some fellas, but Paul is bigger than that. All my owners rang today to say they were very happy to have him ride and had no issues.

‘Everyone was disappointed yesterday but things happen in sport. We insisted he came in to work this morning good and early and got plenty of slagging into him.

‘We treated it just the same as if it had been some country race meeting. Paul had to stand and take it and he did.

‘You probably couldn’t write it, especially on such a big stage, but it happened and we have forgotten about it.’

Mullins has seven of the 12 runners in Friday’s feature Ladbrokes Champion Stayers Hurdle, headed by favourite and Cheltenham winner Penhill.

The ace Elliott has to play at this meeting is unbeaten novice Samcro, who runs in Saturday’s Champion Hurdle.