Jodie Comer has flown her wealthy American lacrosse playing boyfriend to the UK to meet her parents in a sign that things are getting serious for the actress who describes herself as ‘very much in love’.

The 27-year-old Killing Eve star, who is notorious about guarding her private life, was this week revealed to be dating Jack Burke, a 26-year-old from Massachusetts.

He has been seen several times in recent weeks at her parents’ modest home in Liverpool – a far cry from the sprawling secluded New England style house where he grew up in the US.

Set in nearly two acres of wooded grounds, the wooden-boarded property is just 400 yards from the beautiful beaches of Cape Cod Bay in an up-market neighbourhood called South Duxbury.

It could not be more different to Jodie’s roots in her beloved home city of Liverpool where she still famously lives in her family’s semi-detached home.

The actress who shot to fame playing sadistic Russian assassin Villanelle in BBC drama Killing Eve loves living with her parents Jimmy, 54, and Donna, 56, and her 24-year-old brother Charlie when she is not filming. 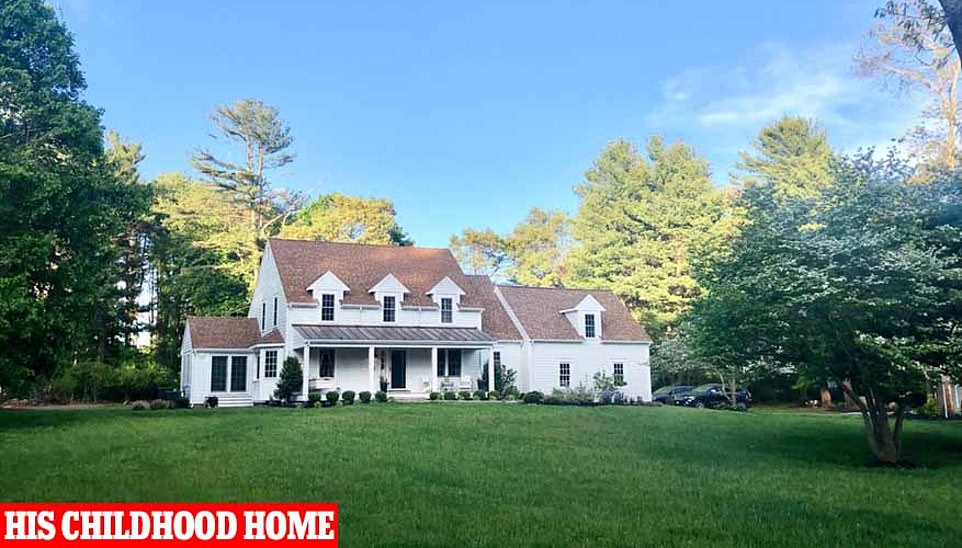 Burke, 27, is the son of wealthy parents in the US who spent 20 years living in this impressive home. The wooden-boarded property is just 400 yards from the beautiful beaches of Cape Cod Bay in an up-market neighbourhood called South Duxbury

Her family’s unpretentious, but smartly maintained house, valued at £230,000 on property site Zoopla, is located in the suburbs of the city.

Its nearest shops are a well-known convenience store and a second hand washing machine repair centre while her down-to-earth local pub has a special offer of two main courses for £9.50. 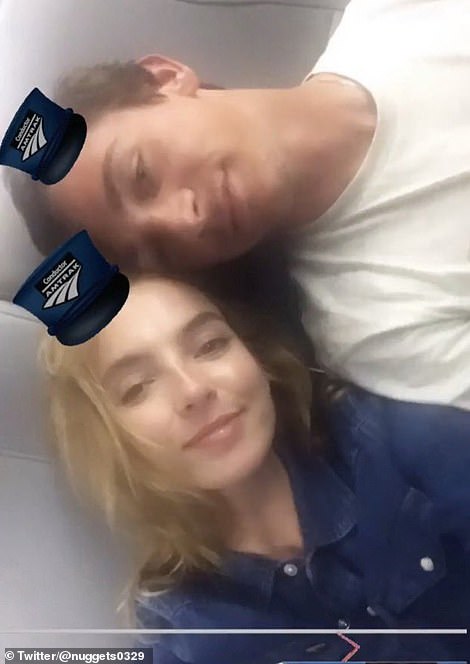 Jodie Comer is believed to be pictured with James Burke

Jodie’s father has worked since the mid-1990s as a physiotherapist for Everton FC and is described as ‘an institution’ at the club after starting there under Howard Kendall.

Her new love James is the son of James and Christine Burke, and has two brothers, Brendan, 22, and Brady.

His mother Christine, 54, works as a respected school teacher in Duxbury. It is unclear what his father, 55, does for a living, but some of his relatives have worked in finance.

The family home was sold last year for £1.2million when it was described by agents as offering ‘a perfect blend of coastal and comfortable family living.’

The tastefully decorated house which has three bathrooms and hardwood floors is just a short stroll from Chinese and Thai restaurants and a gastropub.

The family moved last summer to a smart new townhouse in downtown Boston that was on the market for £1.35million.

James was a star lacrosse player while at Duxbury High School, helping the school to three state championships between 2009 and 2012.

He continued to play the sport as a midfielder at a senior level while at Pennsylvania State University where he majored in communication arts and sciences, according to his player profile.

James skills on the lacrosse pitch earned him the Boston Herald’s Massachusetts player of the year title and the Patriot League’s midfielder of the year award.

He is said to have met Jodie in Boston, around 30 miles from Duxbury, and has reportedly been staying Liverpool as he gets to know the star and her close-knit family. 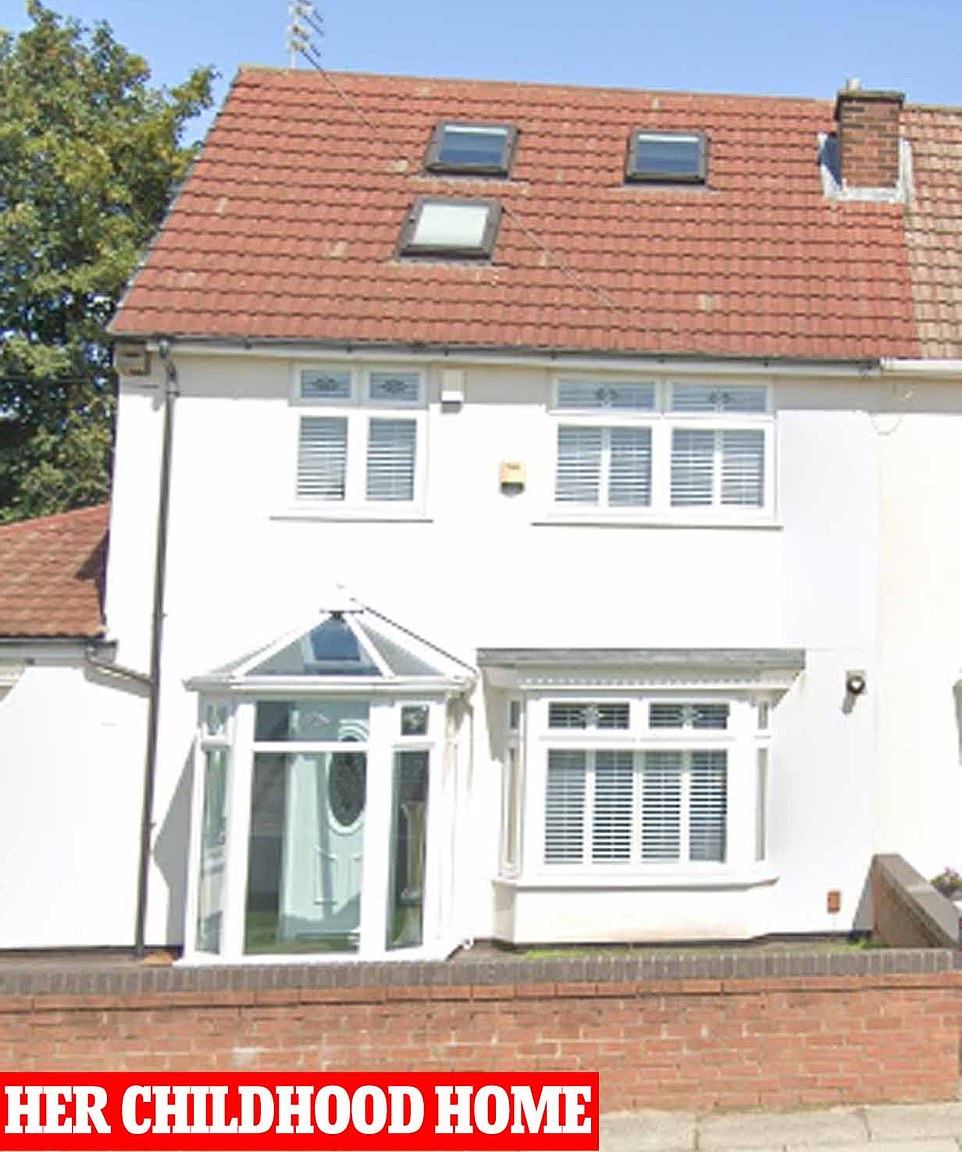 Jodie, 27, grew up in this modest semi-detached home in Liverpool. The star has spent lockdown here with her parents Donna and Jimmy and neighbours have told MailOnline that they have seen ‘sporty’ James at the property 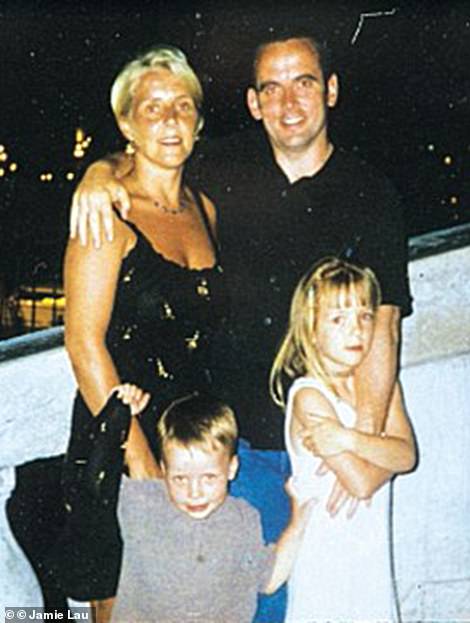 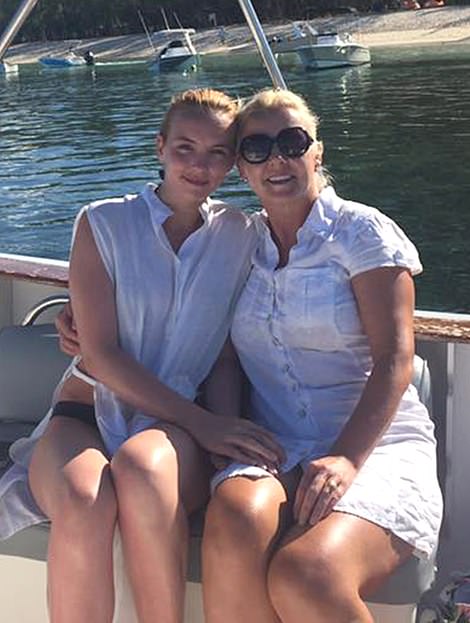 Comer is incredibly close to her parents Donna and Jimmy, a masseuse at Everton Football Club. She also enjoys a close relationship with her brother Christopher (pictured left). Miss Comer is pictured on holiday with mum Donna in 2016 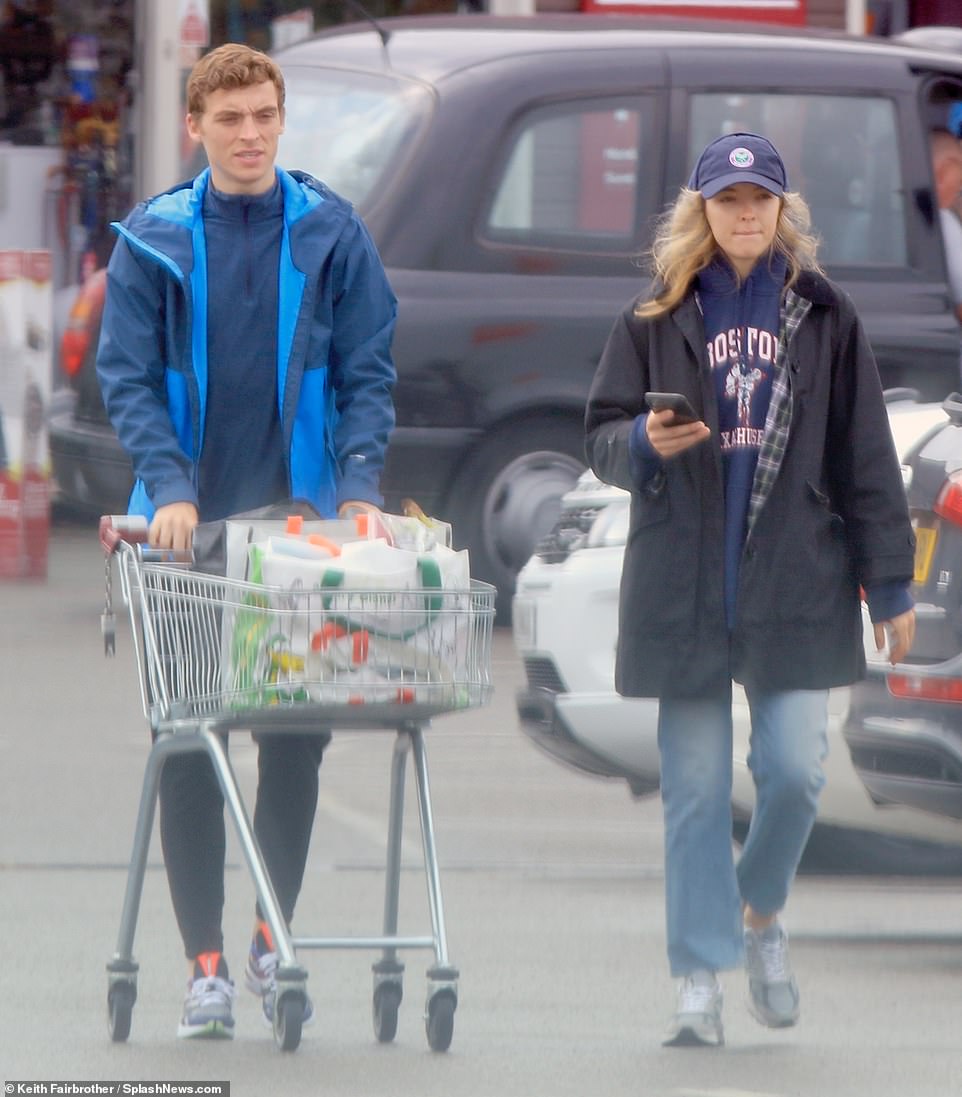 Jodie was seen recently in Liverpool wearing a Boston Laxachusetts jumper, her boyfriend, James’s lacrosse team. The star was out shopping with her brother Charlie Comer (left)

A neighbour of the Comer family in Liverpool revealed that James had been to the property on a number of occasions.

The neighbour said: ‘I’ve seen Jodie with her new boyfriend a few times. He’s met the family – I saw his mum wave them off. ‘Jodie’s been at home because of the lockdown but usually she’s away a lot.’

Another neighbour Mike Hill, 54, who walks his dog near the family home, said: ‘I saw Jodie coming out of the house with a fella.

He looked a bit sporty and Jodie was smiling. ‘She’s a lovely girl – the family are very popular in the area. They are a credit to the city.’

News of Jodie’s romance emerged after a picture posted online showed her and James on a boat with a group of people.

Another snap depicted them posing with their heads together. The actress was also recently pictured wearing a Boston Laxachusetts tracksuit top. James had played for five years at the club.

A video, reportedly from Jodie’s account but tagged with James’ Instagram username, showed her singing in the back of a car. Some of her fans were upset when screenshots from his alleged Instagram account appeared to show he followed US president Donald Trump. 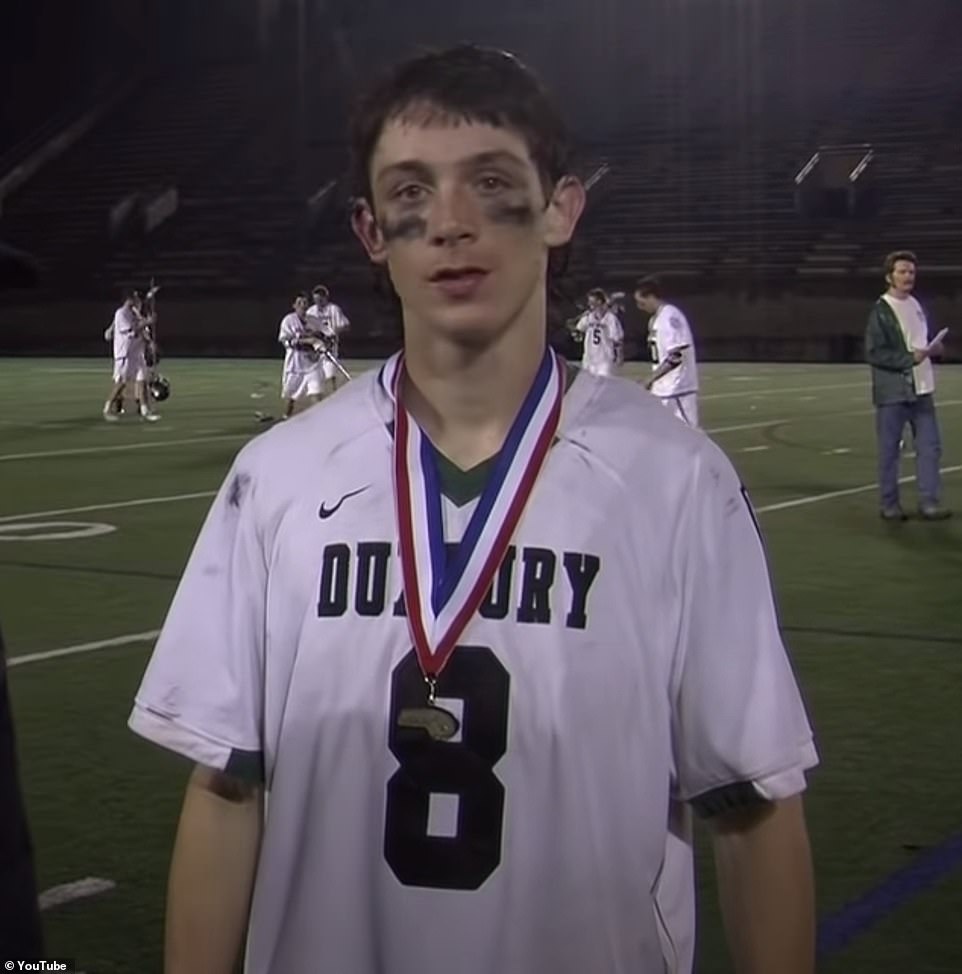 Mr Burke, who went to Penn State University, is a talented lacrosse player, seen here in an interview post-match for his school 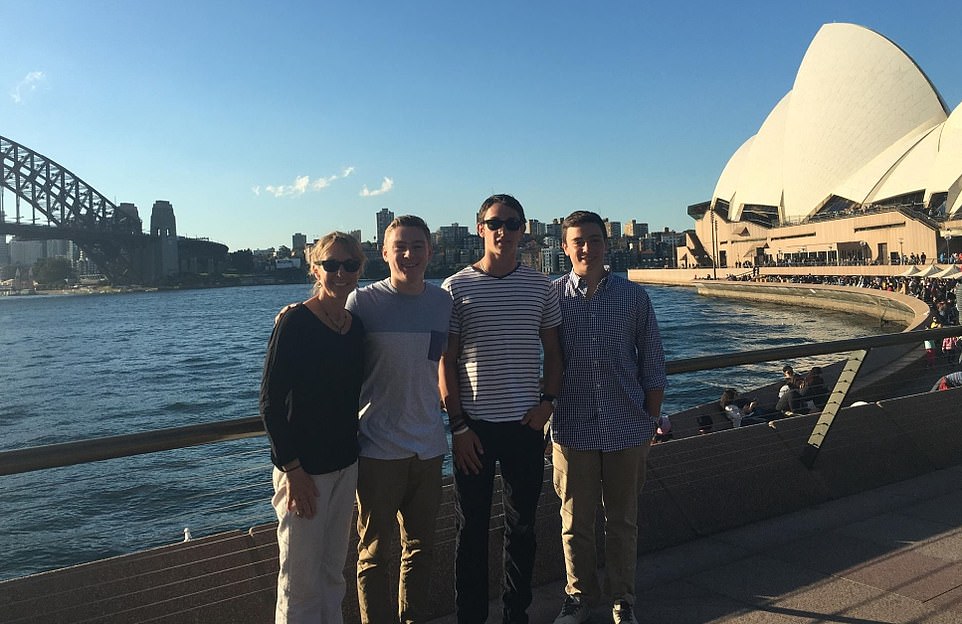 Burke, 27, was born in Duxbury, Massachusetts. Here he is pictured with his mother Christine and two younger brothers Brendan and Brady on holiday together in Sydney 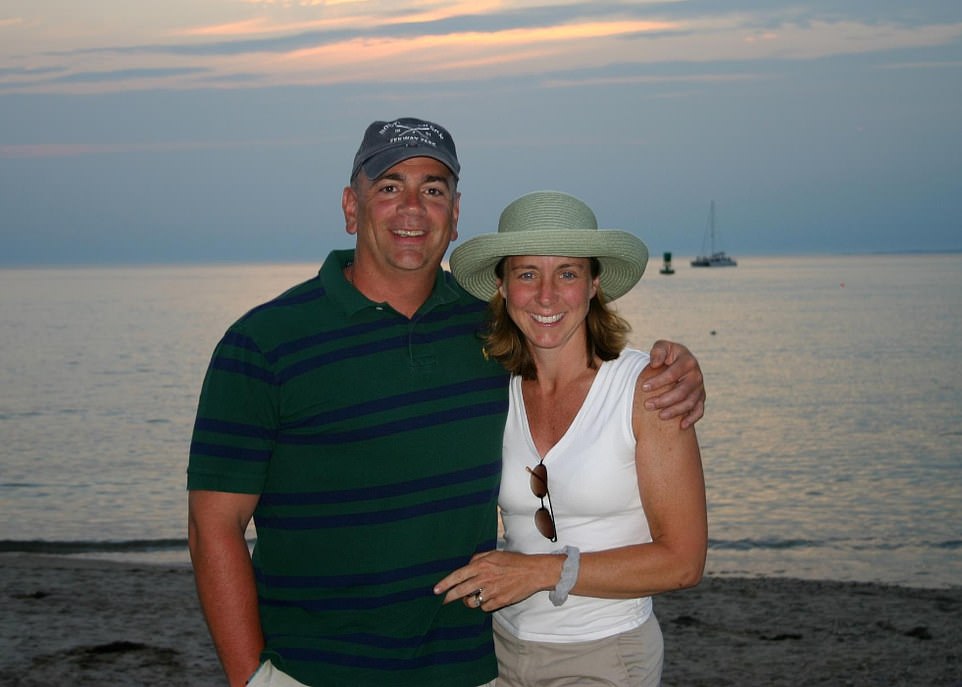 Burke is the eldest of three sons to Jim and Christine Burke, a respected teacher, who lived in Massachusetts for 20 years

His Spotify music account which has been recently deactivated along with his Instagram had a playlist titled Jodie’s Songs.

Official records in the US also reportedly show that James is a registered Republican voter, although many members of the party strongly oppose Mr Trump.

Some Twitter users criticised Jodie for dating James after jumping to the conclusion without any evidence that he must be a Trump supporter and agree with everything the president says.

They have called for her to be ‘cancelled’, claiming that her public support for the Black Lives Matter movement and LGBT rights and the fact that her character Villanelle is bisexual, are at odds with any Republican beliefs.

One tweeted: ‘Jodie Comer if you’re reading this, you can’t play a gay character and call yourself an ally when you’re dating a Republican, you disgusting piece of s***.’

Another posted: ‘Jodie Comer dating a Trump supporter, while she’s portraying an LGBT character … is not only wrong but disgusting. ‘Also her posts about BLM now look like performance activism.’

But others have defended the actress, with one writing: ‘So without any actual evidence the internet is ‘cancelling’ another celebrity. Worms for brains.’

Representatives for Jodie have not responded to requests for comment. Jodie first hinted at her romance in an interview in British Vogue in March when she spoke about being ‘in love’ after being single ‘for a while.’

When asked about love, the Bafta award-winning actor replied: ‘I’m very much in it. I think love’s the best. I’d been single for a while and just kind of going with the flow and doing my thing.’

She did not identify James in the article, but went on to imply that she hadn’t been actively looking for a relationship.