The former vice president and former mayor of New York City ate bacon and eggs in Washington DC before delivering speeches that highlighted their work and hit out at Donald Trump.

Sharpton first spoke out against the president while hosting the breakfast in King’s honor on Monday morning.

‘Today as we have this breakfast, there is no official event at the White House to celebrate Martin Luther King Day,’ Sharpton said during the event.

‘The vice president nor the President, have any official thing on their calendar to celebrate a federal holiday that Ronald Reagan signed.’ 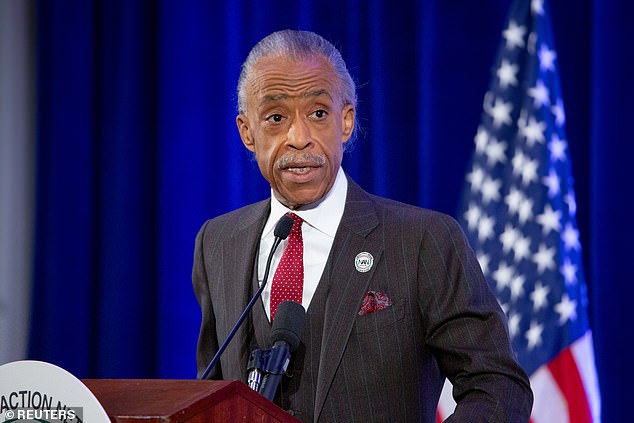 ‘This is an insult to the American people that the president of the United States does not officially recognize or give any ceremony for Dr King.’

Sharpton then went on to criticize Trump’s ongoing government shutdown, claiming the president had also ‘shutdown the King holiday’, according to the New York Post.

‘Dr King was killed on his way to this city to build a poor people’s campaign,’ Sharpton said. ‘He was killed in Memphis fighting for workers, and federal workers are not paid.’

Sharpton ended his speech on a note that was both positive and seemed to be a nod to two of his prominent guests.

‘We have hope, and we hope that leadership will come to this country, and will show a King-like spirit,’ Sharpton concluded. 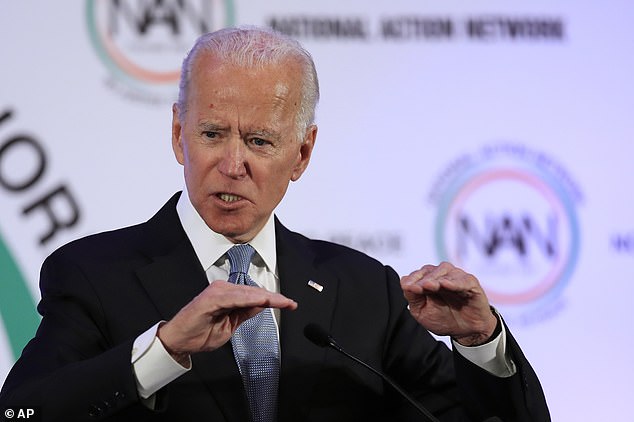 Biden spoke of his work on criminal justice and voting rights, saying he has ‘been in this fight a long time’ 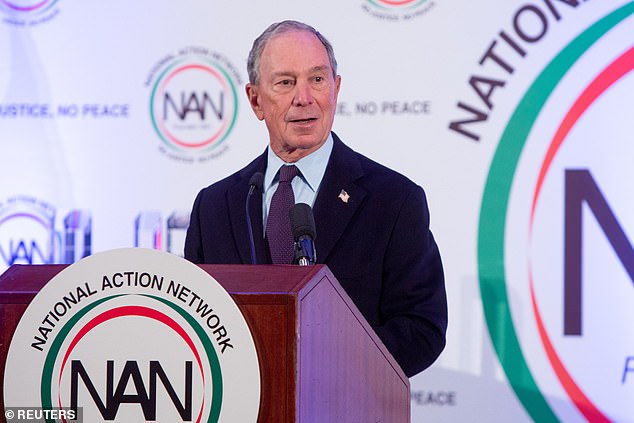 Bloomberg did not specifically mention Trump by name during his speech, although he very clearly criticized the president’s time in office

Both Biden and Bloomberg then delivered speeches that will surely continue to fuel speculation surrounding potential campaigns.

Biden spoke of his work on criminal justice and voting rights, saying he has ‘been in this fight a long time’.

Biden also slammed Trump, pointing to the president’s remarks that there were ‘very fine people on both sides’ after a woman was killed while protesting a white supremacist rally in Charlottesville, Virginia in 2017.

‘No president since the Civil War had ever, ever uttered words like that,’ Biden said. 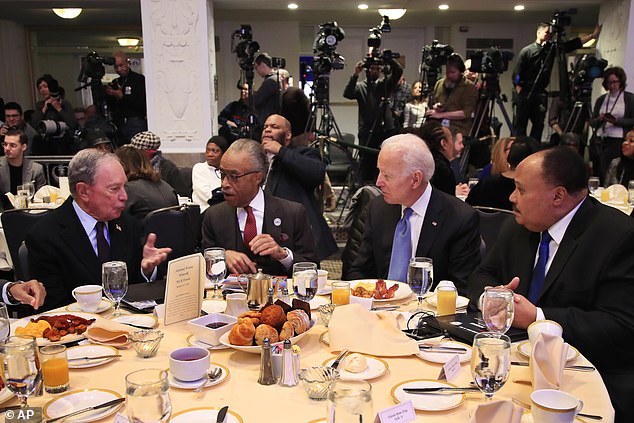 Bloomberg, Biden, and Martin Luther King Jr III all joined Sharpton at his table on Monday 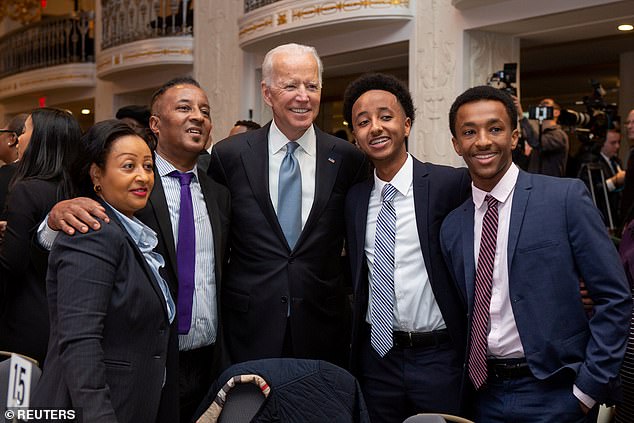 ‘We’ve learned in the last two years it doesn’t take much to waken hate, to bring those folks out from under the rocks.’

‘They have been deliberately reawakened again. Something I thought I would never live to see again, having a president of the United States make a moral equivalence between those who are spreading the hate and those who are opposing it.’

Bloomberg touted his time as mayor of New York City, saying he was always guided by the goal ‘of saving lives of those who faced the greatest risk of gun violence – young men of color’.

And Bloomberg couldn’t help but tease an answer to the question that was on everyone’s minds.

‘Whatever the next year brings for Joe and me, I know we’ll both keep our eyes on the real prize of electing a Democrat to the White House in 2020 and getting our country back on track,’ he said.

‘I haven’t had a chance yet to talk to the vice president at length today, but I did want to get some pointers from him on how it’s like to live in Washington DC.’ 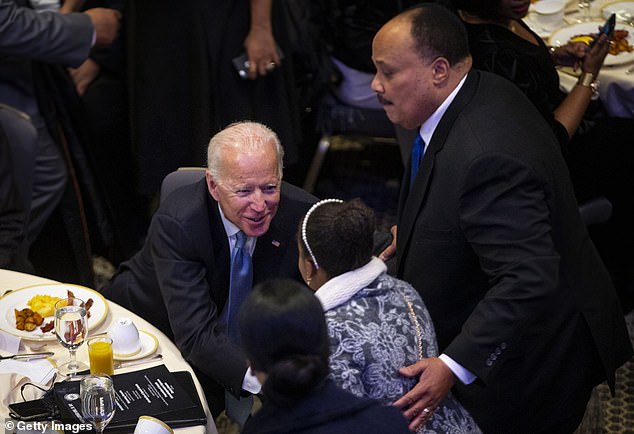 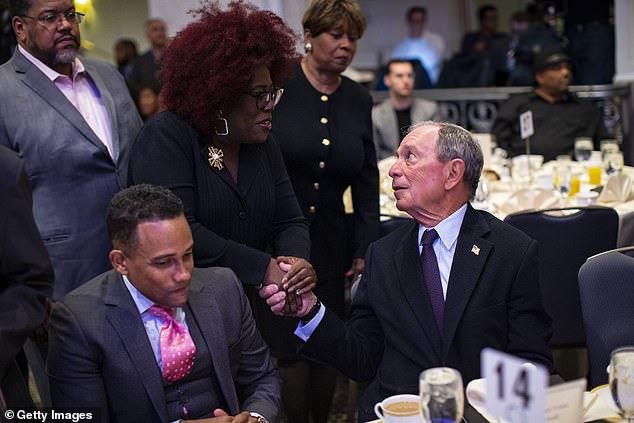 It was first confirmed on Sunday that Trump would not participate in any official Martin Luther King Jr events the following day.

‘According to the White House schedule, he “has no public events scheduled.”‘

He also paid recognition to King on Twitter, linking to the proclamation he signed on Friday for the federal holiday.

‘Today we celebrate Dr Martin Luther King, Jr for standing up for the self-evident truth Americans hold so dear, that no matter what the color of our skin or the place of our birth, we are all created equal by God,’ Trump wrote on Monday.

In his proclamation, the president called on ‘all Americans to recommit themselves to Dr King’s dream by engaging in acts of service to others, to their community, and to our Nation’. 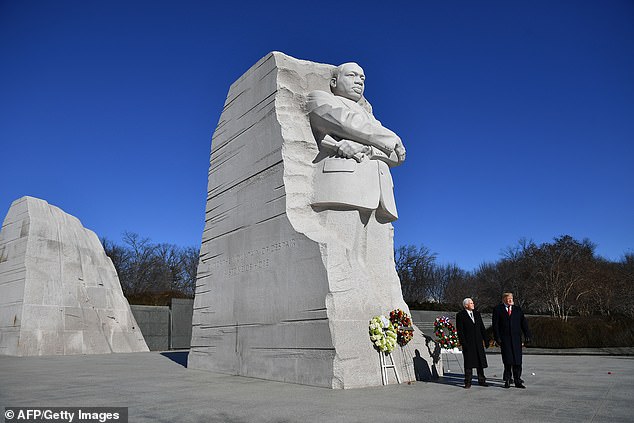 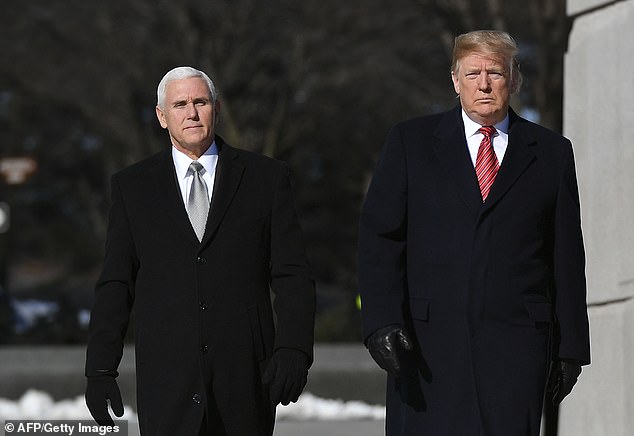 Trump did not hold any official events to celebrate King, unlike predecessors including Barack Obama and George W Bush 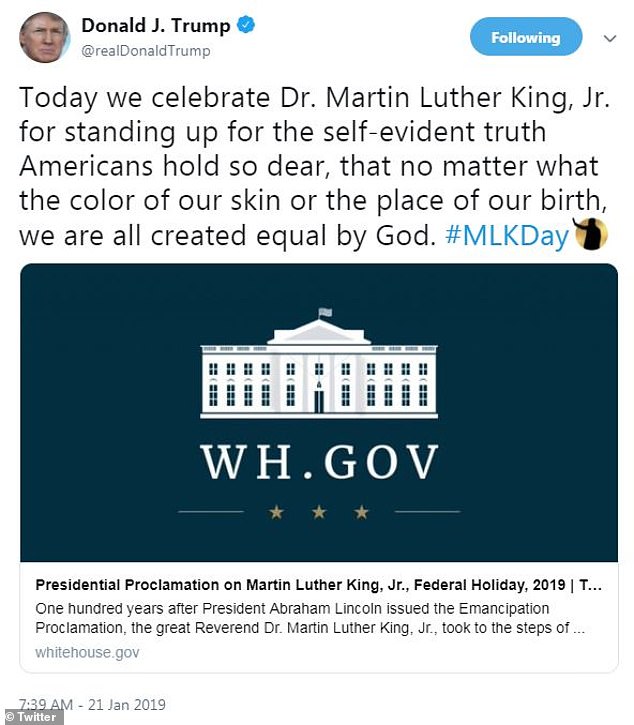 Trump also paid recognition to King on Twitter, linking to the proclamation he signed on Friday for the federal holiday

It remains unclear just what Trump is doing on Martin Luther King Jr day. Last year, he went golfing at his Mar-a-Lago resort.

Presidents in the past, including Barack Obama and George W Bush, have celebrated MLK Day with service events or cultural events honoring King.

On Monday Obama encouraged Americans to honor the civil rights leader’s legacy by ‘standing up for what is right in our communities and taking steps to make a positive impact on the world’.

Trump’s noticeable absence from any official MLK events comes just a day after his vice president compared him to the American icon.

Pence was slammed on Sunday after he compared King’s work to Trump’s demand for $5billion from Congress for a wall along the US-Mexico border.

‘One of my favorite quotes from Dr King was, “Now is thetime to make real the promises of democracy,” Pence said during CBS’s Face the Nation.

‘You think of how he changed America. He inspired us to change through the legislative process, to become a more perfect union.’

‘That’s exactly what President Trump is calling on Congress to do: Come to the table in the spirit of good faith. We’ll secure our border.’

‘We’ll reopen the government and we’ll move our nation forward as the president said yesterday to even a broader discussion about immigration reform in the months ahead.’

On Saturday Trump offered congressional Democrats three years of legislative relief for 700,000 DACA recipients – including protection from deportation – and an extension of legal residence for people living in the country under ‘Temporary Protective Status’ designations. 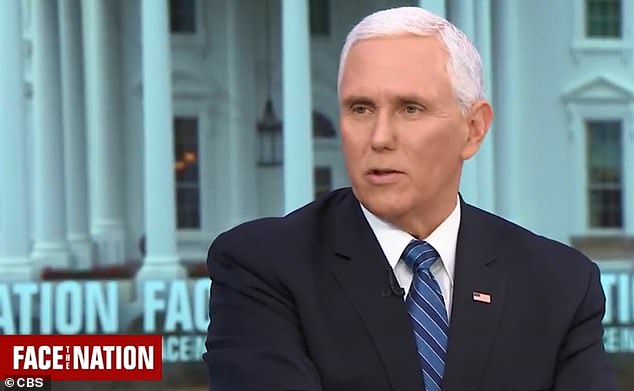 He also offered $800million in urgent humanitarian assistance and 75 new immigration teams to reduce the court backlog of 900,000 cases.

It’s unclear if congressional Democrats will find the proposal enticing enough to pressure House Speaker Nancy Pelosi to bring it to the floor. She called it a ‘non-starter’ before Trump’s address on Saturday.

Pence has been working Jared Kushner, a senior adviser to the president and Trump’s son-in-law, at Trump’s behest to come up with a legislative solution to the shutdown.

The vice president said that Senate Majority Leader Mitch McConnell assured him and Kushner that he would bring the president’s proposal to the floor for a vote this week.