Joe Biden has described his rival for the presidency in November’s election as the first racist president of the United States.

Biden on Wednesday, speaking at a virtual town hall organized by the Service Employees International Union, was asked about the president’s description of COVID-19 as ‘kung flu’ and the ‘China virus’.

A health-care worker at the meeting expressed concern that Trump continues to blame Asians for the coronavirus pandemic.

‘The way he deals with people based on the color of their skin, their national origin, where they’re from, is absolutely sickening,’ said Biden.

‘No sitting president has ever done this.

‘Never, never, never. No Republican president has done this. No Democratic president.

‘We’ve had racists, and they’ve existed, they’ve tried to get elected president. He’s the first one that has.’

Biden accused Trump of using race to drive a wedge between people in society.

‘And the way he pits people against one another is all designed to divide the country, divide people, not pull them together,’ Biden continued.

‘Look what he’s doing now. He’s blaming everything on China.

Trump was asked shortly after, during a White House press briefing, for his response to the accusation.

The president said once again that no one has done more than him to help black Americans since Abraham Lincoln.

He pointed out his administration’s reform of the criminal justice system; the low unemployment rate among black Americans before the pandemic; and his 2017 creation of ‘opportunity zones’ – areas which provided tax breaks for developers in deprived areas, leading to new housing, businesses and jobs.

‘I’ve done more for black Americans than anybody with the possible exception of Abraham Lincoln,’ he said.

‘Nobody even comes close.’ 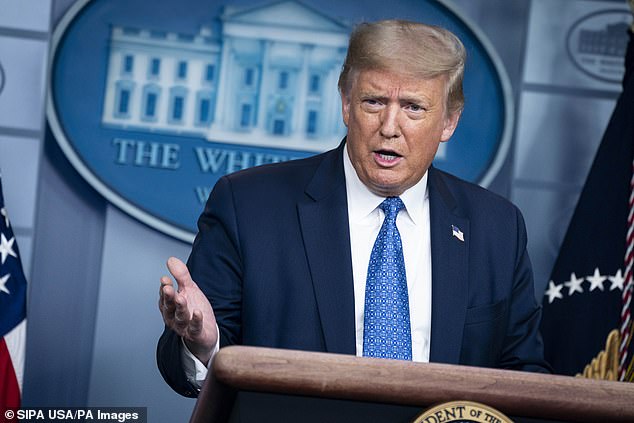 Katrina Pierson, a Trump campaign senior adviser, said Biden’s comments were ‘an insult to the intelligence of black voters’ and pointed to remarks Biden has made in the past.

Biden last year faced criticism from his Democratic primary opponents when he spoke favorably of his ability to work with segregationist senators, and he once had to apologize for calling Barack Obama ‘the first mainstream African American who is articulate and bright and clean and a nice-looking guy.’

‘President Trump loves all people, works hard to empower all Americans, and is supported by more black voters than any Republican presidential candidate in modern history,’ Pierson said.

‘No one should take lectures on racial justice from Joe Biden.’

Biden has accused Trump of using racist language and promoting racist policies in the past.

In May, Biden told the Asian American and Pacific Islanders Victory Fund that Trump had allowed racism to be ‘unleashed’ by the pandemic.

‘The pandemic has unleashed familiar forces of hate, fear and xenophobia that he always flames, that have always existed in this society,’ Biden said.

‘But this president brought it with him, has brought with it a new rash of racial messages, verbal and physical attacks, and other acts of hate, some subtle, some overt, against the Asian American and Pacific Islanders.’

Last year, Washington Post columnist Jonathan Capehart asked Biden whether it was wrong to describe Trump as ‘a racist with a white supremacist policy agenda.’

He then said he did not want to wade into labeling whether Trump is personally racist, but said Trump was promoting ‘racist policies.’

‘The way he talks about immigrants as if they are, they’re corrupting America, as if they’re all terrorists. I mean, it’s just bizarre.’

And when Trump said four Democratic congresswomen of color should ‘go back to the places from which they came,’ Biden called it ‘a flat racist attack.’