Former Vice President Joe Biden appealed to Senate Republicans Sunday not to allow President Trump to ‘jam’ through’ a Supreme court pick – and said if he himself wins in November, it should be he who gets to make the selection.

‘This appointment isn’t about the past. It’s about the future. And the people of this nation are choosing their future right now as they vote,’ Biden said in a speech in Philadelphia Sunday.

‘To jam this nomination through the Senate is just an exercise in raw political power, and I don’t believe the people of this nation will stand for it,’ Biden said.

‘President Trump has already made clear that this is about power, pure and simple power,’ Joe Biden said Sunday

After heralding the late Justice Ruth Bader Ginsburg, Biden said the American people would not stand for what he said would be an ‘abuse of power.’

‘President Trump has already made clear that this is about power, pure and simple power,’ Biden said.

‘Even if President Trump wants to put forward a name now, the Senate should not act until after the American people select their next president, their next Congress, their next Senate,’ he added.

Biden said that if Trump wins, ‘Then the Senate should move on his selection and and weigh the nomination he choses fairly,’ Biden said.

He went after Senate Majority Leader Mitch McConnell for stating immediately after Ginsburg’s death that Trump’s nominee would come to the Senate for a vote. 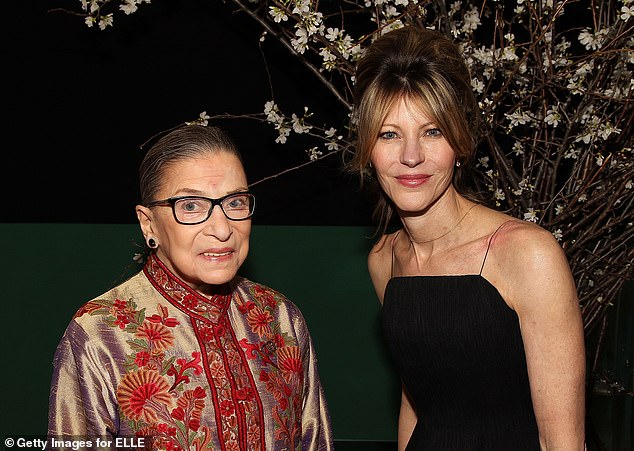 WASHINGTON, DC – MARCH 18: Justice Ruth Bader Ginsberg (L) and Robbie Myers, Editor-in-Chief, ELLE, attend the ELLE and HUGO BOSS Women in Washington Power List Dinner at The Residence of the German Ambassador on March 18, 2015 in Washington, DC. Biden said he had spoken to members of Ginsburg’s family since her passing Friday

Speaking from the National Constitution Center, Biden called out the ‘grave wrong that President Trump and McConnell are pursuing here.’

‘Even if President Trump wants to put forward a name now, the Senate should not act until after the American people select their next president, their next Congress, their next Senate,’ said Biden, speaking from the National Constitution Center in Philadelphia.

Many of Biden’s remarks were directed not at Trump and McConnell, but at Senate Republicans who could derail the nomination. A pair of them, Sens. Susan Collins and Lisa Murkowski, have said the Senate should not take up a nomination before the election.

McConnell cited what he called the ‘Biden rule’ in thwarting Judge Merrick Garland’s nomination in 2016, holding it up for nearly 9 months without a hearing at the end of President Obama’s term.

Biden blasted McConnell for the ‘made-up a rule based on the fiction that I someone believed that there should be no nomination to the court in an election year.’

‘He created a new rule, the McConnell rule. Absolutely no hearing, no vote for a nominee in an election year. Period, no caveats,’ Biden said.

Biden said he was not being ‘naive’ and reserved comments for current Republicans – some of whom are up for reelection.

Biden also rattled through the list of issues that are at stake in a Supreme Court nomination – including health care protections in the Affordable Care Act.

His shot at McConnell how McConnell used Biden’s past words against him while killing the Garland nomination and infuriating Democrats.

Biden as Judiciary Chairman in 1992 at the end of the George H.W. Bush presidency said in a floor speech that ‘action on a Supreme Court nomination must be put off until after the election campaign is over.’ No such vacancy occurred, however.

Biden also eulogized Ginsburg as a ‘hero’ and an ‘icon,’ and spoke of the end of her life with her family. He said he had spoken to her family members since Ginsburg’s passing. ‘She held her hand and gave them strength and purpose to carry on,’ said Biden.

‘I want you to use my words against me,’ Graham said. ‘If there’s a Republican president in 2016 and a vacancy occurs in the last year of the first term, you can say Lindsey Graham said let’s let the next president, whoever it might be, make that nomination.’

He also quoted former Judiciary Chairman Sen. Charles Grassley, who also spoke against an election year vote on a nomination.

Biden said millions of Americans would have voted by October 1, and their voices should be included.

Biden also tried to keep a focus on the coronavirus – saying 200,000 would have died ‘probably by the time I finish this talk’ – although he accidentally said 200 million.